Nancy Cain, owner of Against the Grain Gourmet, in her store in Brattleboro. 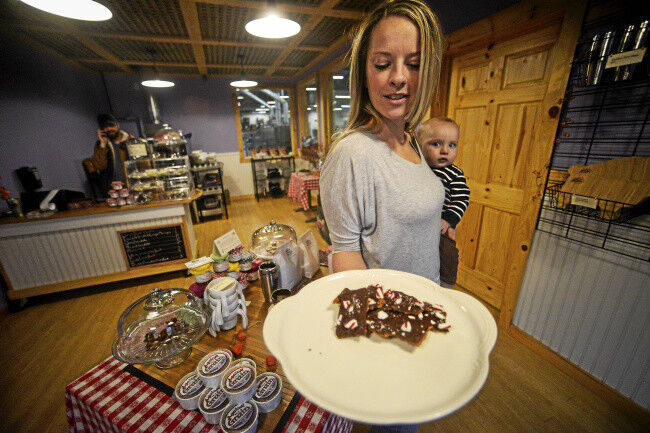 Cheri Abrams, office manager at Against the Grain in Brattleboro, holds a plate of Peppermint bark.

Nancy Cain, owner of Against the Grain Gourmet, in her store in Brattleboro.

Cheri Abrams, office manager at Against the Grain in Brattleboro, holds a plate of Peppermint bark.

On Tuesday, Against the Grain announced it is partnering with HumanCo, a wellness company focused on healthier living and sustainability.

“We’re really excited,” said Tom Cain, who founded Against the Grain with his wife, Nancy, in 2005. “We started talking to them at the beginning of the year. It’s been a pretty long courtship.”

HumanCo purchased a majority interest in Against the Grain, but Tom said he and Nancy, and the operation in Brattleboro, are not going anywhere. In fact, he said, the reason they decided to partner with HumanCo is because they’ve wanted to grow the company for years but have lacked the ability to do so.

“We needed more than we could develop ourselves,” he said. “Sales and marketing expertise and growing our ability to offer more products.”

Amy Zipper, HumanCo’s chief operating officer, said Against the Grain was a great fit for HumanCo’s growing family of brands because they have a shared mission of creating healthy and delicious products.

“The HumanCo team has eaten Against the Grain’s pizzas and breads for years,” she said. “HumanCo is dedicated to creating and acquiring brands that meet its high bar for health, ingredient, and quality standards.”

Nancy developed gluten-free products for her husband because he has celiac disease, an intolerance of gluten, which causes an immune response when consumed.

“Three of my children have food allergies,” said Zipper, who works outside of New York City but has a second home in Stratton. “We are focused on a gluten-free diet, and have actively sought out the Against the Grain products.”

“He used food to cure himself,” she said, so it was a natural for HumanCo to want to partner with people like Tom and Nancy Cain who share HumanCo’s values. “They are an important part of the business and continue to be very committed to Against the Grain and the local community. We are fortunate to be partnering with founders who share our focus on mission of health and sustainability.”

“We did a customer survey and the biggest complaint we heard was people can’t find enough of Against the Grain’s products,” she said. “We are going to expand the brand’s presence nationally and expand its distribution to different stores as well without compromising the quality.”

HumanCo will be keeping the current leadership staff and all employees and is looking to grow its personnel. Zipper said going forward, Against the Grain will maintain and expand its presence in Brattleboro.

Zipper said she believes that Against the Grain will continue to attract top local workers, especially given its great work culture, compensation packages and growth plans. The company will also continue to locally source its ingredients.

Adam Grinold, the executive director of the Brattleboro Development Credit Corporation, which maintains the BDCC Business Park where Against the Grain is located, said there is room to grow there.

“Tom and Nancy took an idea, put in the oven and have been growing it ever since,” he said. “I know they are really excited to have this new outside resource and a chance to grow.”

Tom Cain told the Reformer that Against the Grain currently has about 100 employees.

“We are the primary maker of frozen bread and pizza in the gluten-free market,” he said. “We have been supplying bread and pizza across the country for seven or eight years.”

Karp co-founded Hu, a paleo-focused restaurant in New York in 2012 with his wife, Jessica, and brother, Jordan. They shuttered the restaurant in 2020 and switched their attention to making snacks. Karp recently sold Hu to Mondelez and went on to found HumanCo, which recently released it first product, Snow Days, a snack with a cassava-based crust, containing mozzarella cheese sourced from grass-fed, pasture-raised cows, and a sauce packed with tomato, sweet potato, carrot, spinach, onion and olive oil.

Last year, HumanCo acquired a majority stake in Coconut Bliss, a maker of non-dairy frozen desserts and also invested in Montys NYC, a maker of a cashew-based cream cheese-style spread.

“I love pizza, but most grain-free options do not taste very good and/or are filled with weird, questionable ingredients,” stated Karp in a news release announcing the acquisition of Against the Grain. “They make the most delicious, environmentally conscious pizza and bread that meets both our HumanCo ingredient and taste standards.”

“As a family-owned company in our small corner of Vermont, the decision to join HumanCo was not taken lightly,” stated Tom Cain in the news release. “We are fortunate to have found a partner that understands the importance of our commitment to creating the highest quality grain-free bread and pizzas. They also understand that our staff is one of our most important ingredients, and they share our commitment to giving back to our community. Employee retention is paramount, and the future scale of our products will allow employees even greater career opportunities. Our employees, the business, and our community will reap the rewards of this partnership.”