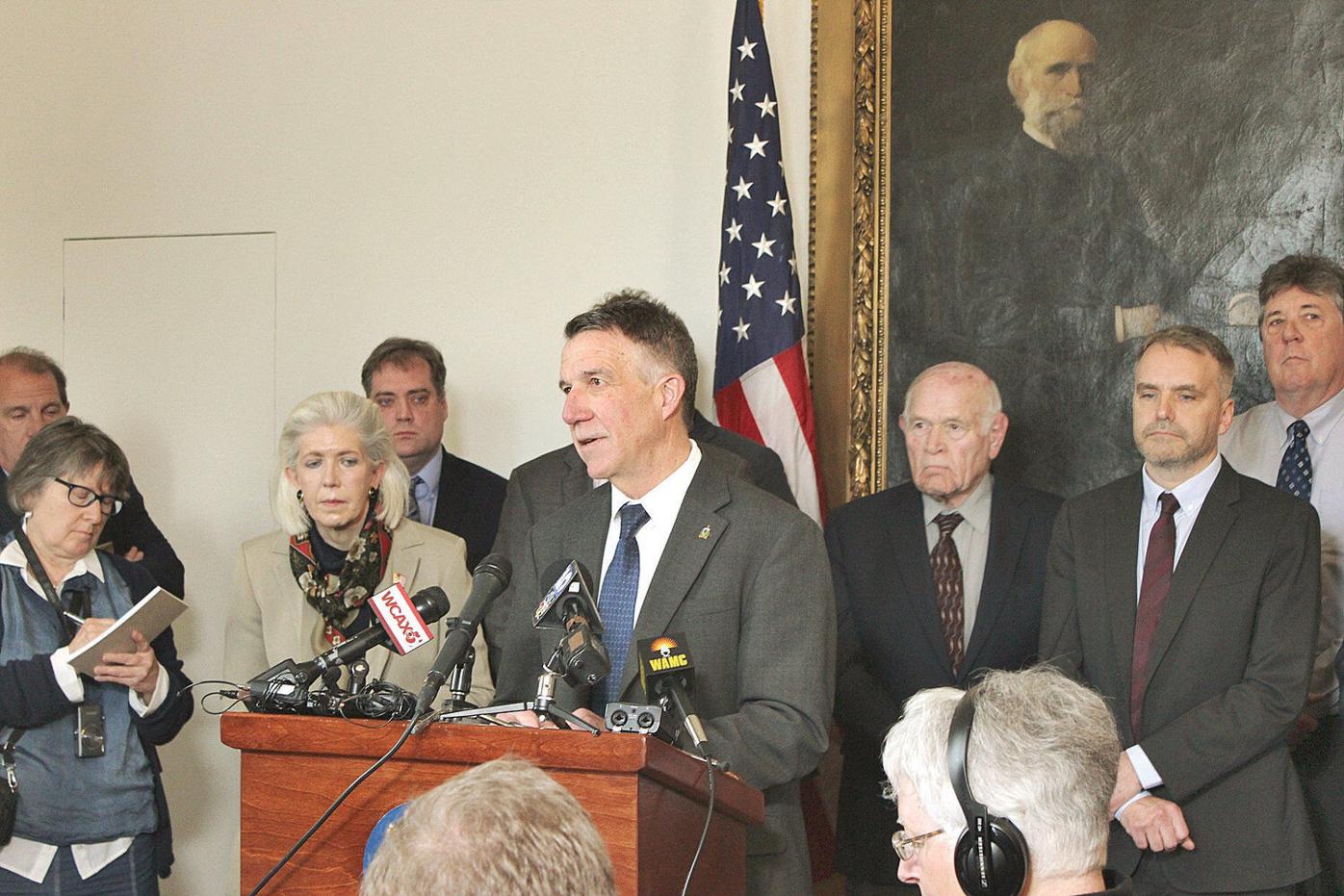 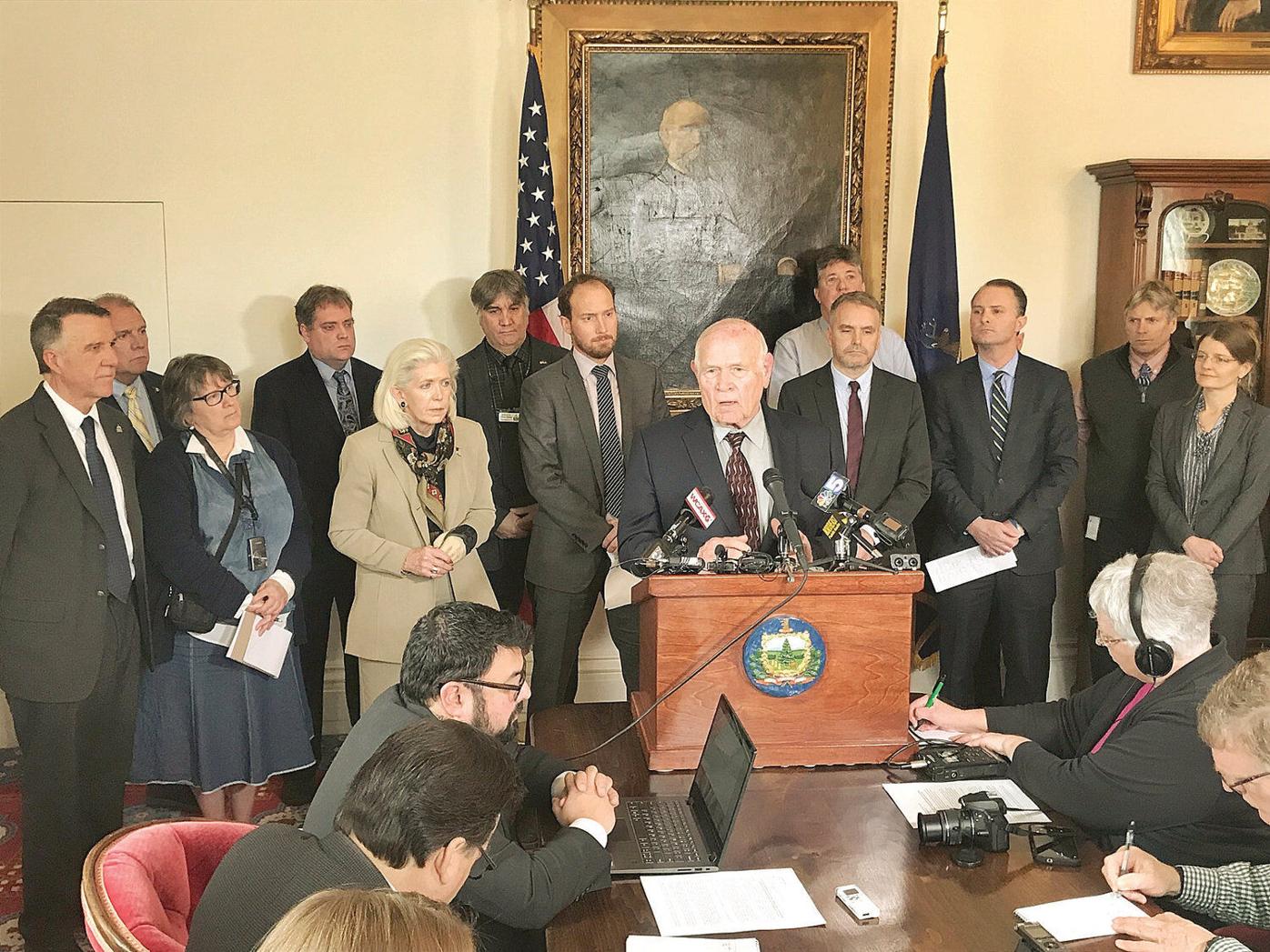 State Sen. Dick Sears, D-Bennington, speaks during the announcement of a final settlement between the state and Saint-Gobain Performance Plastics over PFOA contamination. To Sears' right is state Sen. Brian Campion, D-Bennington, and to the far left is Gov. Phil Scott.

State Sen. Dick Sears, D-Bennington, speaks during the announcement of a final settlement between the state and Saint-Gobain Performance Plastics over PFOA contamination. To Sears' right is state Sen. Brian Campion, D-Bennington, and to the far left is Gov. Phil Scott.

The proposed consent agreement with Saint-Gobain Performance Plastics, which will now be subject to a 30-day public comment period, covers extension of municipal water lines or well-related improvements for 245 homes in the eastern section of the contamination zone.

With members of the Bennington County delegation standing behind him, Scott said during a press conference at the Statehouse that this final settlement builds upon the $20 million agreement the state and Saint-Gobain reached in 2017 covering homes in the western sector of the contamination zone around the former factories.

"Since PFOA was discovered in Bennington wells, leaders across state and local government — under multiple administrations — have been working to restore safe drinking water to every resident, and I'm pleased to take another step forward today," Scott said.

In total, the overall settlement is expected to extend municipal waterlines to 470 homes or businesses in Bennington and North Bennington with contaminated wells. Water line work in the western section is essentially complete, and work in the eastern sector is expected to begin this summer and be completed within two years.

"I thank the people of Bennington for their continued trust, patience and support," Scott said. "I also want to thank the Agency of Natural Resources, the Attorney General and his team; the Bennington delegation and local leaders for their hard work, as well as Governor [Peter] Shumlin, Attorney General [William] Sorrell and their teams for their work at the start of this process. It has truly been a team effort, as we're all committed to reaching the best possible resolution for the impacted communities."

Saint-Gobain agreed to fund a significant portion of the waterline extensions, officials said, and be responsible for long-term monitoring, the drilling of replacement wells in some areas, and the long-term operations and maintenance of in-home filtering treatment systems.

The state officials valued the overall settlement with Saint-Gobain at approximately $50 million to $60 million. Pending final state budget approval, the administration has agreed to commit $4.7 million from lawsuit settlement funds, a state drinking water revolving loan program and reimbursements from Saint-Gobain for past state expenses in dealing with the pollution, according to Peter Walke, deputy secretary with the Agency of Natural Resources.

The state funding will allow extension of waterlines to the maximum extent feasible, including into areas where the company had balked at funding new lines, officials have said.

"I want to first thank the people of Bennington and North Bennington," said Attorney General T.J. Donovan. "This has been a long road, and I want to thank you all for your patience as we've worked to get to today's settlement."

He also thanked the entire Bennington delegation for their "relentless" work on behalf of constituents in pushing for solutions to the crisis, which was discovered through well water testing in early 2016.

Speaking on behalf of the local delegation, Sen. Dick Sears, D-Bennington, recalled the shock of discovering hundreds of wells were contaminated with the industrial chemical used in the production of Teflon, which was used for years by ChemFab to coat fiberglass and other fabrics and dry them at high temperatures.

Much of the pollution was believed by state environmental officials to have spread through the air from ChemFab stacks in North Bennington and Bennington, where the company operated from 1968 to 2002.

Saint-Gobain acquired the company in 2000 and moved the Bennington operations to New Hampshire two years later.

The settlement is "a tremendous step forward," said Sears, who lives within the contamination zone in North Bennington.

"The people of Bennington have been incredibly patient, and I want to thank them first and foremost," Sears said. "I am also grateful to the whole state and local government team for going above and beyond to help the community achieve long-term clean drinking water as quickly as possible."

Contacted Wednesday, Town Manager Stuart Hurd said in an email, "I am very pleased to hear that an agreement has been reached between the state and Saint-Gobain to provide clean potable water to the home owners in the northeast quadrant of the community impacted by PFOA contamination. While not every home will be connected to municipal water, every effort will be made to provide a permanent solution for every impacted home. I look forward to the start of construction and thank those impacted for their patience and understanding as this process has unfolded."

The settlement agreement will now be subject to a 30-day public comment period. Residents can access the terms of the settlement, as well as find additional information, online at http://dec.vermont.gov/commissioners-office/pfoa.

For residents with questions about the settlement details, Walke said state Department of Environmental Conservation staff members will be available in Bennington from 1 to 7 p.m. on Monday, April 15, and 8:30 a.m. to 1 p.m. on Tuesday, April 16.

The open house periods will be held at the Department of Health Bennington offices at 342 Main St.

This report will be updated.