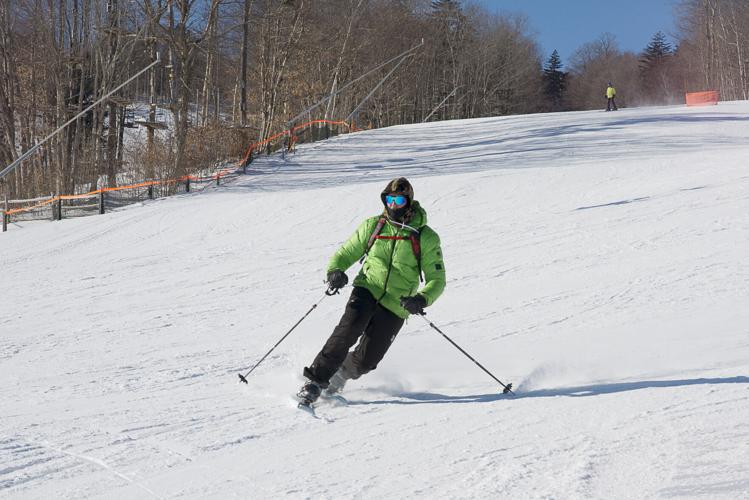 Gabe Gilliam, of Manchester, comes down a slope at Bromley Mountain earlier this season. 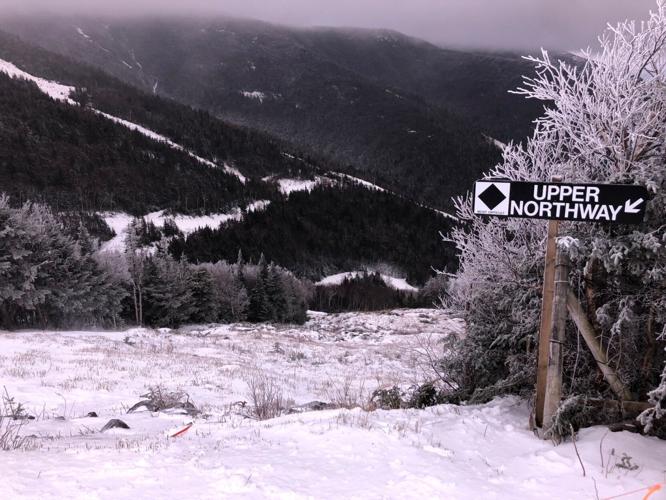 Gabe Gilliam, of Manchester, comes down a slope at Bromley Mountain earlier this season.

The arid mountains outside of Beijing do not normally receive snow.

To host the 2022 Winter Olympics, Chinese authorities rolled out a massive snowmaking effort to provide artificial powder for athletes, injecting the usually brown landscape with ribbons of white.

Human-made snow has been the norm at international skiing and snowboarding competitions for the past decade according the International Ski Federation’s Bernhard Russi.

In a warming climate, even mountain resorts that normally get plenty of snow are increasingly reliant on artificial snow and having to consider big investments in expanding that capacity.

Although there is currently several feet of snow on mountains across the Northeast, that was not the case in December. What started as a promising season, abruptly reversed course in the weeks leading up to the important holiday season.

A warm front brought temperatures in the 50s to Lake Placid, N.Y. The mercury reached 62 degrees in Stowe.

Although the normal winter chill began to return in the approach to New Year’s Eve, the thermometer still registered above freezing in the parking lot of Whiteface Mountain in New York’s Adirondacks.

Outside the lodge, melting icicles and slushy approach hinted at warmer than ideal conditions.

This is often the reality for modern ski resorts: Natural snowfall is less consistent and temperatures are not as reliably cold as they once were.

That has made the creation of artificial snow, colloquially known as snowmaking, essential to keeping mountains open.

From the vantage of the Whiteface summit ski lift, the effect of snowmaking is obvious.

To the left, a trail lined with snow guns is uniformly white, with full snow coverage and skiers zipping down.

But directly under the lift, a closed section of trail has nothing but natural snow. Brown winter grass is clearly visible, poking through alongside patches of ice and rock on the evergreen-lined slope.

There are still plenty of enthusiastic skiers enjoying terrain where there is snow. One of them is 60-year-old Willy Young of nearby Plattsburgh, N.Y.

Better known around the mountain as “Whiteface Willy,” Young stands out among the crowd wearing an authentic Tibetan winter hat that he proudly declares was made locally in Lake Placid from beaver skin.

Young, who has been skiing at Whiteface for more than five decades, is quick to praise the mountain’s team of snowmakers, without whom he says there would not be much skiing.

As if on cue, several snow guns below the chair clicked on, filling the air with clouds of vaporized water.

These are new, high-efficiency snow guns, part of a $9 million investment in snowmaking equipment Whiteface installed over the previous summer.

“We can’t rely on natural snow anymore,” said the mountain’s general manager, Aaron Kellett. “It’s just too unpredictable, too unreliable, and it just hasn’t been happening much the past couple years.”

Kellett has been skiing at Whiteface for the past 30 years and said there has been a noticeable change in snowfall during those decades.

Although there is less natural snow than there once was, the thermometer still spends plenty of time below freezing over the course of a winter.

Kellett noted that the key to maintaining operations at a modern ski resort is being able to generate winter precipitation when the temperature drops.

“When Mother Nature does cooperate with cold, we need to be able to capitalize on that to get our mountain open and get skiers here,” Kellett explained.

Most of the snowmaking infrastructure on Whiteface was originally installed to support Olympic competition in the 1980 winter games, hosted in nearby Lake Placid. Kellett said there have been relatively few updates over the ensuing 40 years.

But as part of the recent summer improvements, new pipes, pumps and vaporizers were installed to more efficiently turn water from the Au Sable River into slope-side powder.

Mountains around the Northeast and North America are now having to consider those kinds of investments.

“You really have to invest in more firepower in your snowmaking, so when you have those windows of opportunity you want to take full advantage of them,” said Win Smith, the longtime owner Sugarbush Resort outside of Montpelier.

Smith noted that whether a resort has the money for significant capital investments like snowmaking can vary. Large, established destinations or those with big corporate owners will have more flexibility.

Whiteface is a state-backed enterprise, under the umbrella of New York State’s Olympic Regional Development Authority.

But for smaller, independent mountains, the kind which dot the northeast, Smith said the answer depends greatly on how well those destinations are already doing economically. He uses the example of Wachusett Mountain in Central Massachusetts.

“They’re very successful, they make good money so they have the capital to put back into the system,” Smith explained.

In contrast, he notes that other, similar-sized resorts may face headwinds, such as aging equipment, lack of access to capital for major investments or thinner profit margins.

“Those are the ones that I think are going to be more challenged,” Smith said, in reference to prospects for adapting to a low-snow future.

For some of those midsize mountains, consolidation might be the path to financial survival.

Smith noted that the Vail Resorts conglomerate of Colorado has acquired mountains in New York, Vermont (Stowe, Okemo and Mount Snow) and New Hampshire in recent years, often been to the chagrin of local skiers and riders.

While adaptation will keep many resorts open through the medium term future, University of New Hampshire climate researcher Elizabeth Burakowski said that if warming trends continue unabated, eventually there will be a tipping point.

“We are going to see a threshold crossed where making snow is not even an option because the temperature is simply going to be above freezing,” she explained.

That point is still some ways off for the Adirondacks and Northern Vermont according to Burakowski. But more southerly locales are on track to cross the threshold much sooner.

Pennsylvania logs 3.4 million skier visits per year, more than New Hampshire and almost as many as New York.

Burakowski said that how Pennsylvania skiers adjust to more warm days at their home mountain could have a major economic effect on the region’s ski industry.

“I think the multimillion-dollar question is whether or not those skiers and would-be skiers from Pennsylvania, as they crossed the threshold from below freezing to above freezing, whether those skiers are going to make their way up to Vermont to learn,” she reflected.

The outcome will affect more than just weekend recreation.

The winter sports industry represents around 10,000 jobs in both New York and Vermont. It also generates around $590 million in annual economic activity for both states, according to a 2018 assessment by the climate advocacy group Protect Our Winters.

If more people venture north in search of snow, it could boost, or at least maintain, those economies.

However, warmer winters could also result in fewer people learning to ski, depriving the industry of a future customer base. There might also be some reduction in existing skiers, if residents of warmer areas are forced to travel greater distances to find snow.

That could mean fewer lift tickets and restaurant visits that provide revenue for typically rural ski towns and jobs for their residents.

In the long term, the entire industry faces a potentially existential threat.

A recent assessment by climate scientists at St. Lawrence University in Northern New York found that if current warming trends continue unabated, natural snow and ice could largely disappear from the region by the end of the century.