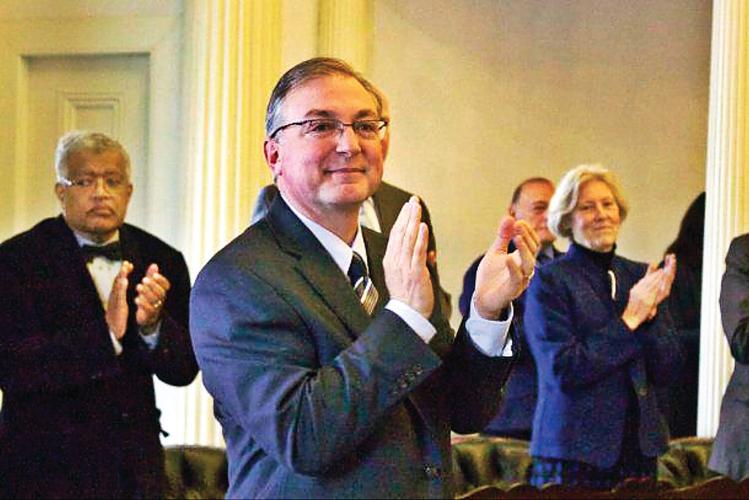 Sen. Phil Baruth, D-Chittenden, is the chief sponsor of the universal background check bill, S.6. He says the legislation would simply require secondhand gun sellers to go through the same legal process new firearm shops must undergo at the time of sale. 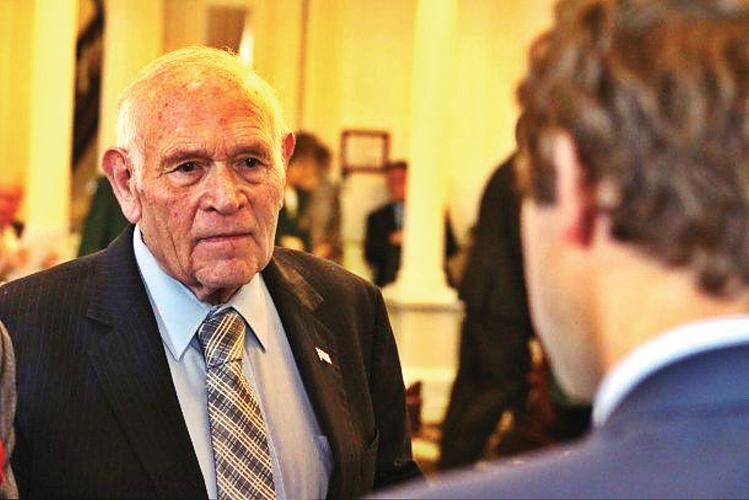 State Sen. Dick Sears, D-Bennington, is the chair of the Senate Judiciary Committee. The bill he has proposed, S.22, is designed to keep the guns from people who are "an extreme risk" to themselves or other people.

Sen. Phil Baruth, D-Chittenden, is the chief sponsor of the universal background check bill, S.6. He says the legislation would simply require secondhand gun sellers to go through the same legal process new firearm shops must undergo at the time of sale.

State Sen. Dick Sears, D-Bennington, is the chair of the Senate Judiciary Committee. The bill he has proposed, S.22, is designed to keep the guns from people who are "an extreme risk" to themselves or other people.

MONTPELIER — Vermont has a traditional hunting culture and is counted among a small group of states with liberal gun laws. Residents can conceal and carry a gun without a permit, for example, and there are few restrictions on where gun owners can carry firearms — guns are prohibited only on school grounds, school buses, courthouses and the Statehouse.

While background checks are required for new gun purchases, secondhand firearms can be sold without a review of the purchasers' criminal background through the National Instant Criminal Background Check System.

A universal background check law, now proposed in the Vermont Senate, would require private sellers of secondhand guns to run the names of purchasers through the national database.

Closing the so-called gun show loophole has long been the holy grail for gun control advocates. It has been adamantly opposed by the Vermont Federation of Sportsmen's Clubs, and it faces an uphill battle in the Senate, which is divided on the issue.

Despite that split, however, the Senate has agreed to hold a hearing on three gun bills from 5:30 to 7:30 p.m. Tuesday, Jan. 30, at the Statehouse. Prior to the hearing, the Senate Judiciary Committee will take testimony on the legislative proposals.

There are proposals in both the Senate and the House that would allow law enforcement to remove guns in the event of a violent threat. The Senate bill, S.22, proposed by state Sen. Dick Sears, D-Bennington, is designed to keep the guns from people who are "an extreme risk" to themselves or other people, and it would enable police to obtain permission from a judge to remove weapons for up to a year. The House bill, H.422, would allow law enforcement to confiscate guns immediately in domestic disputes and temporarily hold the firearms for five days.

Either bill could be a vehicle for the universal background check measure.

"It is in society's interest to keep that weapon out of the hands of people who shouldn't have it," Baruth said.

Opponents in the Senate say universal background checks are unconstitutional. Baruth says people make that argument by saying the Founding Fathers didn't intend to protect your unfettered right to buy a new weapon — only your right to buy a secondhand weapon.

"That's what to me gives the lie to the argument that this is unconstitutional," Baruth said. "The other thing is they say it can't work, but obviously it does work. Millions of guns have been kept out of the hands of people who shouldn't have them.

"And the last thing is that they say it can't work without a permanent registry, but of course, again, the new gun background check system works without a registry," he continued. "Those arguments on their face are obviously wrong, but they persist because people don't want to have a logical discussion."

Three years ago, there was little support for a universal background check requirement. At the time, Baruth was the only person who supported any action on gun safety, he says. The proposal has gained momentum since, and he has the backing of six people in the Senate Democratic caucus, in addition to six bill sponsors.

In 2015, the background check provision was stripped out of a gun control law that prohibited felons who have been convicted of a violent crime from possessing or purchasing guns. The law also requires courts to file a confidential report about individuals have received court-ordered mental health treatment to the national database.

Since the law was passed, universal background checks have become "the de facto point of agreement" for Vermonters, Baruth says. A 2016 poll conducted by the Castleton Polling Institute showed that more than 80 percent of residents, including gun owners, support the requirement. "It's become a point of consensus, but people, for their own reasons prefer not to recognize this," Baruth said.

The bill, however, faces an uphill battle in the Senate. Sears, who is chair of the Senate Judiciary Committee, has not supported universal background checks in the past, and he said in an interview last week that he hasn't changed his mind on the subject since 2015. The last time the committee voted on the measure, it was defeated 3-2.

"That's why we're holding a public hearing to hear what the people have to say," Sears said.

Sears says under Baruth's proposal, "if I wanted to sell a firearm to you that was worth $25, I've got to go to a gun dealer and pay them $50 to do the background check."

"I think you're just making people who are otherwise law abiding go into a criminal act," Sears said. "I don't want to see that, and I think we automatically assume things, and I don't know how much good the background check will do. I know most people are supportive of background checks, but when you look at the details, I'd have to see that it wouldn't affect that type of arrangement with my neighbor."

Because of the split on the Senate Judiciary Committee, the issue has been "paralyzed," Baruth said. The bill could come out of committee on a negative vote, or Sears could work with proponents and guarantee a vote on the issue at the beginning of the next biennium.

"As long as there is a debate and we let the chips fall where they may after that, we could honestly look people in the eye and say after Pulse Nightclub, after Las Vegas, we've had the discussion," Baruth said.

State Sen. Joe Benning, R-Caledonia, says a universal background check would not have prevented Stephen Paddock from shooting into an outdoor concert in Las Vegas, killing 58 people and wounding 500. Paddock had no criminal record and would not have come up on the NICs database. No law would have prohibited him from buying firearms.

Benning said he didn't think the background check bill was necessary. "I don't think Vermont has a problem that warrants us spending any time at all on this particular issue," he said.

While guns have been an issue in domestic violence cases, Vermont has not experienced a random mass shooting.

"Where they are suggesting we have problems, this legislation would not cure those problems," Benning said. "Because if you have a person who has legitimately purchased and gone through a background check and has decided to get into a motel and blown away 300 some odd people down below that tells me a universal background check never would have worked with that individual."

"There have been several mass shootings," Benning said, "and every one I can think of has been done by a person who has purchased weapons legally or has stolen them. To my eyes, as a constitutionalist, you are presumed to have rights, and if this passes, the presumption is flipped on its head, and you have to demonstrate you're worthy of having a gun."