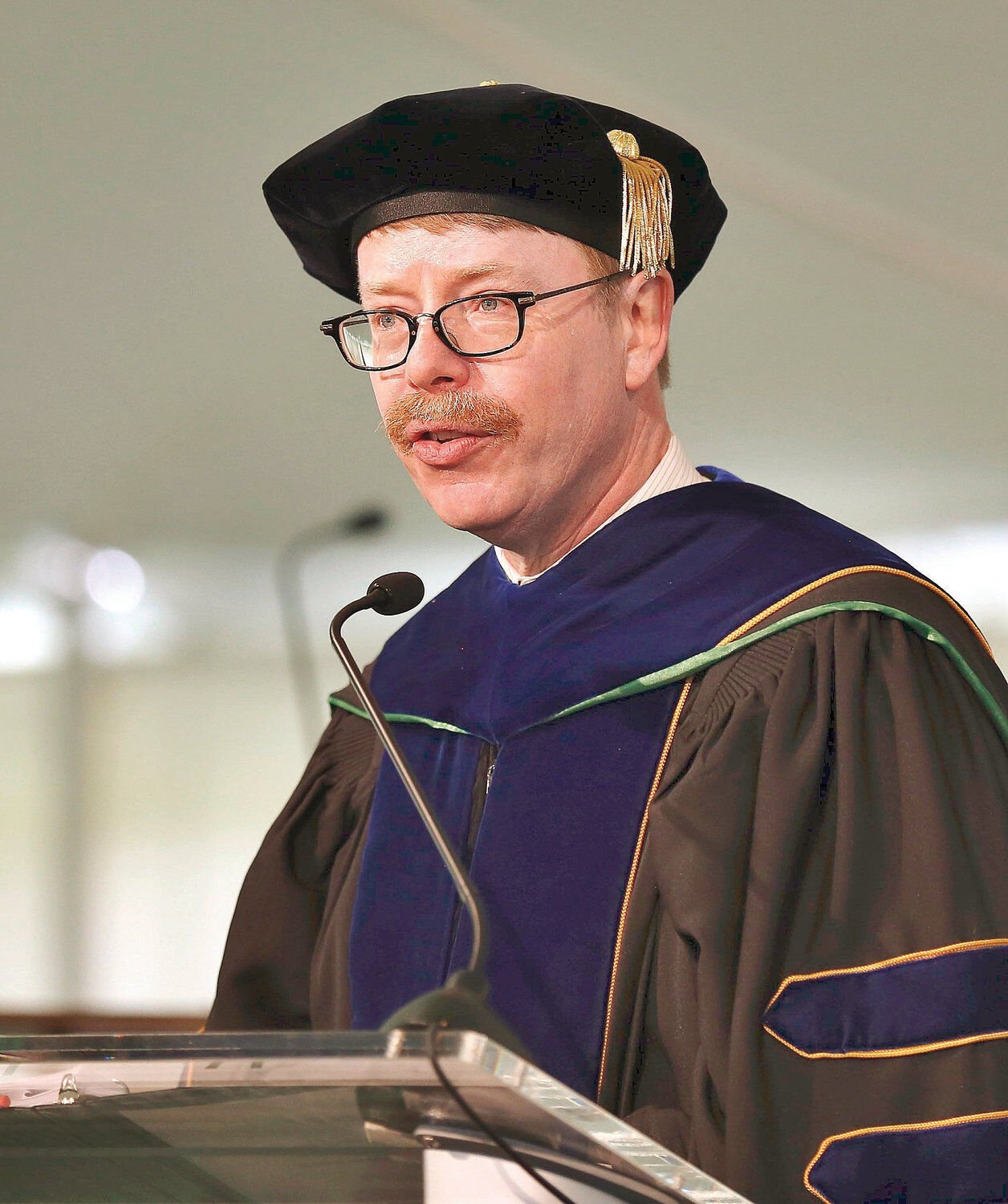 In an email to the Banner, Southern Vermont College President David Evans, shown here at commencement in 2015, responded to criticism from faculty and staff over the way the closing is being handled. "In situations such as the one the college is experiencing, there is simply no good option for communication, only less-bad ones," he said in part.. 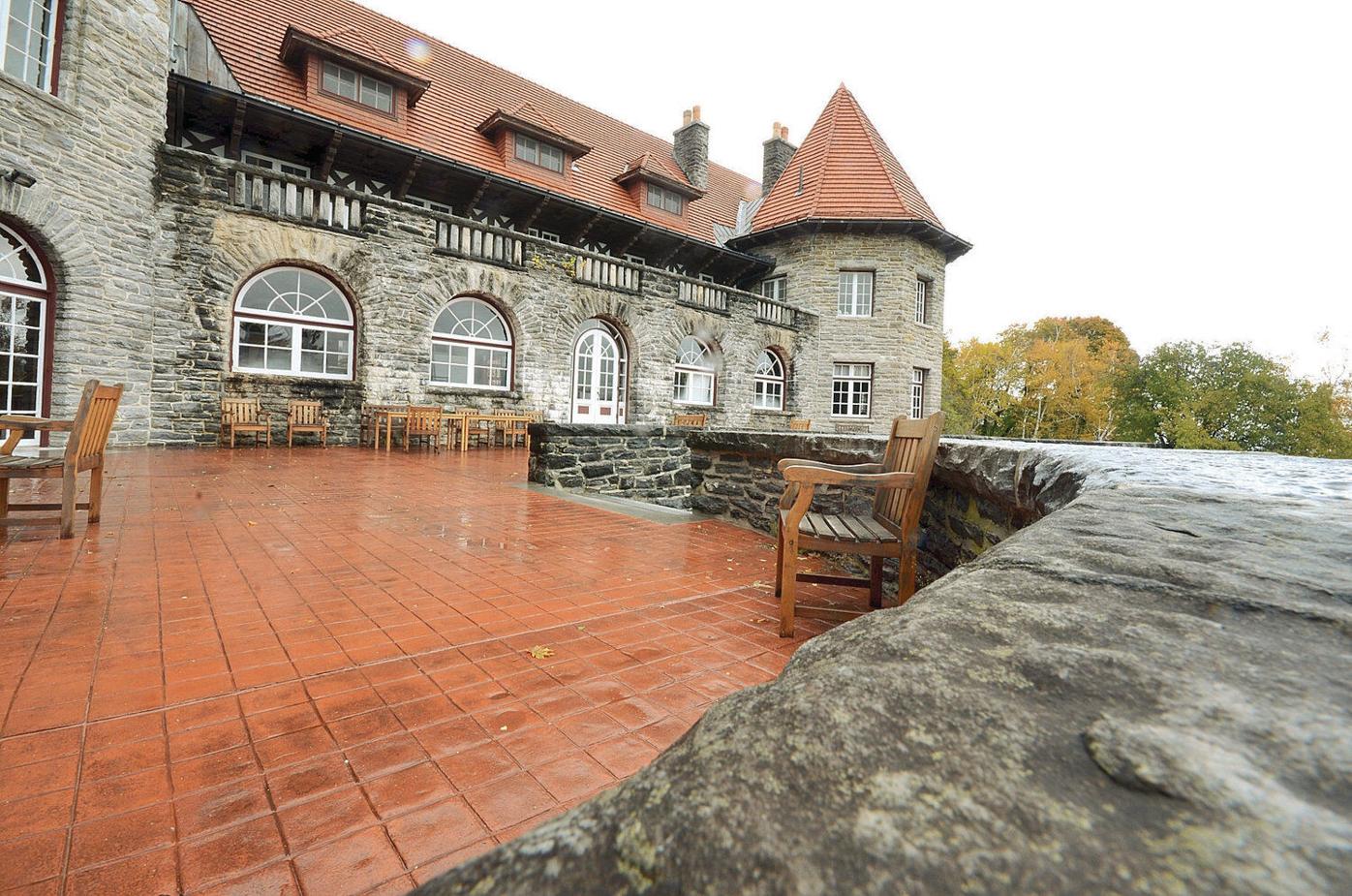 Local businesses and the Bennington Area Chamber of Commerce have organized a fundraising effort to help Southern Vermont College employees in need. The college is closing after this semester wraps up.

In an email to the Banner, Southern Vermont College President David Evans, shown here at commencement in 2015, responded to criticism from faculty and staff over the way the closing is being handled. "In situations such as the one the college is experiencing, there is simply no good option for communication, only less-bad ones," he said in part..

Local businesses and the Bennington Area Chamber of Commerce have organized a fundraising effort to help Southern Vermont College employees in need. The college is closing after this semester wraps up.

BENNINGTON — Employees of Southern Vermont College are describing a campus sometimes teetering on the verge of chaos as the financially troubled school struggles toward a final graduation ceremony on May 18.

Faculty members, who now have little hope of receiving final paychecks anytime soon, say everyone seems resolved to stay on the job to allow students to complete the spring semester. But in the words of one staff member, who like several others asked not to be identified: "This is a sad time because the school is closing, but it's now also an angry time."

That anger is primarily aimed toward the board of trustees and the college administration, they said, citing a lack of honest communication with the staff about the extent of mounting financial difficulties, and more recently about the harsher details of the looming closure.

"One of the problems we have had, consistently, is that we are getting a lot of different stories," a faculty member said.

"It doesn't seem like we are being treated as professionals," another said. "We feel very much like pawns in the whole closure of SVC."

Over the past week, nearly a dozen faculty and staff members responded to requests from the Banner to describe the situation on campus.

Employees said they feel they've been misinformed or misled by the trustees and the administration every step of the way as the financial situation worsened. No one asked for assistance in reaching out to potential donors or in seeking grants, they said, despite having people on staff with expertise in those fields.

Faculty members said they weren't kept abreast of the true situation, which became increasingly dire this year, even while they remained loyal to the college despite receiving no cost-of-living raises for several years.

"We want to be there for the students," a faculty member said, but added that instructors felt pressured because they were told failure by the college to complete the year would leave SVC open to lawsuits from students and parents that would consume any money left over from sale of the real estate.

"There has been a lot of rumors and a lot of drama," she said last week. "Every day it is something new."

While staff members said President David Evans has communicated with the staff, though not always accurately or on a timely basis, they said the trustees were largely absent before an April 19 meeting. During that session, a lone trustee, David Newell, of Bennington, and an attorney representing the board answered questions from employees.

Staff members contended that the full board should have met with the entire campus community at some point after the closure announcement in early March to listen to their many concerns and frustrations.

"They should have the balls to face those people whose lives they are changing," one employee said.

SVC officials announced March 4, eight weeks ago today, that the small private college would close at the end of the semester. They blamed mounting debt and declining student enrollment, which threatened the school's academic accreditation.

The New England Commission of Higher Education in fact decided after a Feb. 28 hearing on SVC to withdraw the school's accreditation as of Aug. 31, citing a requirement that colleges have adequate financial resources to support their academic and other programming.

The college thus joined the College of St. Joseph in Rutland and Green Mountain College in Poultney in facing closure this year because of financial difficulties. All three were plagued by the type of enrollment issues small colleges around New England are facing as the number of high school graduates intending to go to college has declined.

Over the past two weeks, rumors have swirled the SVC campus of an early shutdown and/or cancellation of the May 18 graduation ceremonies for lack of sufficient funding.

Administration officials and the board of trustees have obviously been scrambling to raise additional funds to complete the school year.

"I am happy to say that to Board of Trustees has approved the $910,000 loan, which will cover payroll and other obligations through the May 16 payday," he said in a notice to the staff. "In addition, a donor has come forward with a gift that will enable the college to cover the next pay period's obligations (through May 30), as well as to support management of final grades, transcripts, and other functions during that time."

A similar announcement had been emailed to staff earlier in the week, only to be rescinded as further loan details had to be worked out, staff members said. They said that prompted a new wave of frustration for both employees and students.

Students, who have had to study for final examinations while feeling unsure whether there would be a graduation or uncertain where they will transfer to next year, "are just exhausted," a faculty member said, because of the changing rumors and announcements from the administration.

In an email Friday, Evans addressed criticism of the way the closure is being handled.

"As for transparency," he said, "the board and cabinet have tried to balance a large range of competing interests and have sought to provide people with the information they need, while not making commitments that cannot be kept or being unduly pessimistic. In situations such as the one the college is experiencing, there is simply no good option for communication, only less-bad ones."

He added, "In consultation with our professional advisors, we have sought to be as clear as responsibly possible. At the same time, there have been long periods when the actual situation was clear to no one, and speculation would have been irresponsible and far likelier to do harm than good."

Evans also elaborated about the loan, saying it "is from several members of the board, for which we are very grateful. The board voted today to approve it so that should be a solid commitment. We have also received a gift that covers current obligations through the next payroll period after graduation (through May 25), which is immensely helpful in dealing with student records and related matters. The loan is [$910,000], and the gift amount is confidential but it is substantial."

While graduation and completion of the semester are now seemingly assured, faculty members who elected to have their paychecks spread out over 12 months, rather than the nine months of the academic year — about 90 percent of full-time faculty — were told April 19 that there currently is no money to cover the checks due over the summer.

Faculty members said that amounts to nearly a third of their pay for a contract year they will complete in May.

Addressing that, Evans informed the staff on Friday, "At this point, the college will likely not be able to pay employees immediately at the end of May for accrued wages and benefits they elected to defer into June, July and August. Potential sources of additional funding, including liquidation of the assets, are being explored, but timing is not assured."

"One of the reasons we haven't spoken up so far is that we didn't want to create an adversarial relationship," a faculty member said last week, "and we love our students dearly and we are trying to detoxify a very toxic situation for them."

Staff members said another reason few have spoken publicly about the situation on campus is because they were given the impression that commenting could negatively affect an orderly shutdown of SVC and/or could lead to them being fired or laid off.

At the same time, there was "a pretty organized campaign to protect their assets," meaning the real estate, a staff member said, but that didn't seem to extend to the concerns of employees.

"I couldn't believe that a school with this mission would act this way," he said.

Faculty also countered a statement from the administration after the March 4 announcement that access to the campus would be controlled and general access by the media barred because students had asked that they not be approached during an emotional time. But that was not something they have heard from students, several faculty members told the Banner.

Asked about marketing efforts for the 371-acre campus and buildings and the Laumeister Art Center off West Road, which was acquired through a donation in 2017, Evans said local and national real estate firms have been hired for that purpose.

"The art center is listed with TPW Real Estate [www.tpwrealestate.com] in Manchester," he said in an email. "The listing price is $2.95 million."

He added, "We are working on the listing for the main campus. The broker there is Keen Summit Partners, a national firm that specializes in unusual commercial properties. They have a joint agreement with TPW. I don't know what the listing price will be, but the appraisal is a little over $8 million. I believe that both the main campus and the art center have had several informal showings."

"We remain working diligently to discharge all employee obligations in a timely fashion," Evans told the Banner. "Adjunct faculty get their final paycheck in May so they are covered. Security and maintenance remain open questions, but are clearly involved with protecting the collateral, so we continue to work with the bank on those matters. Everyone has an interest in protecting the physical integrity of the property."