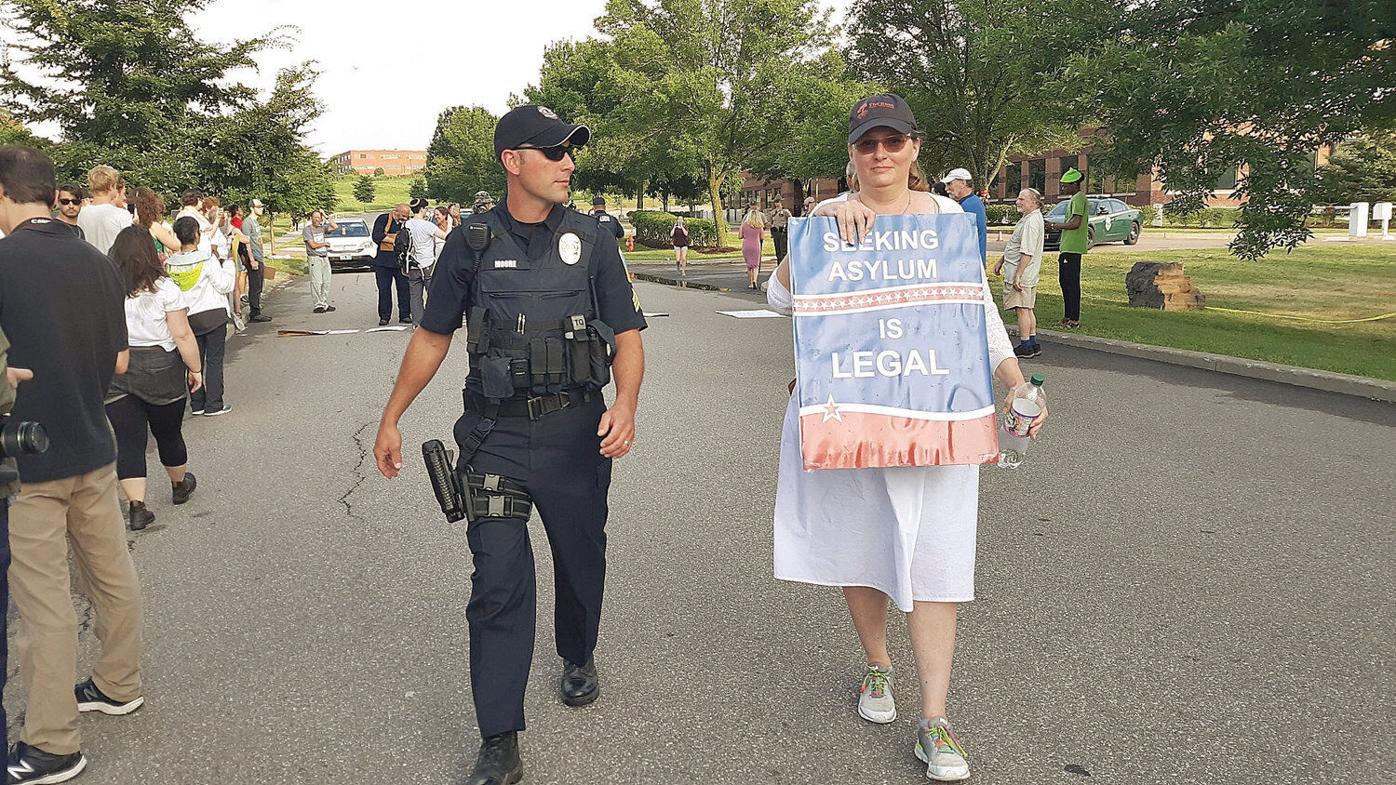 Putney resident Laura Lynette Chapman is arrested by Sgt Josh Moore of the Williston Police Department during a protest of the ICE Law Enforcement Support Center on Harvest Lane in Williston on Sunday. 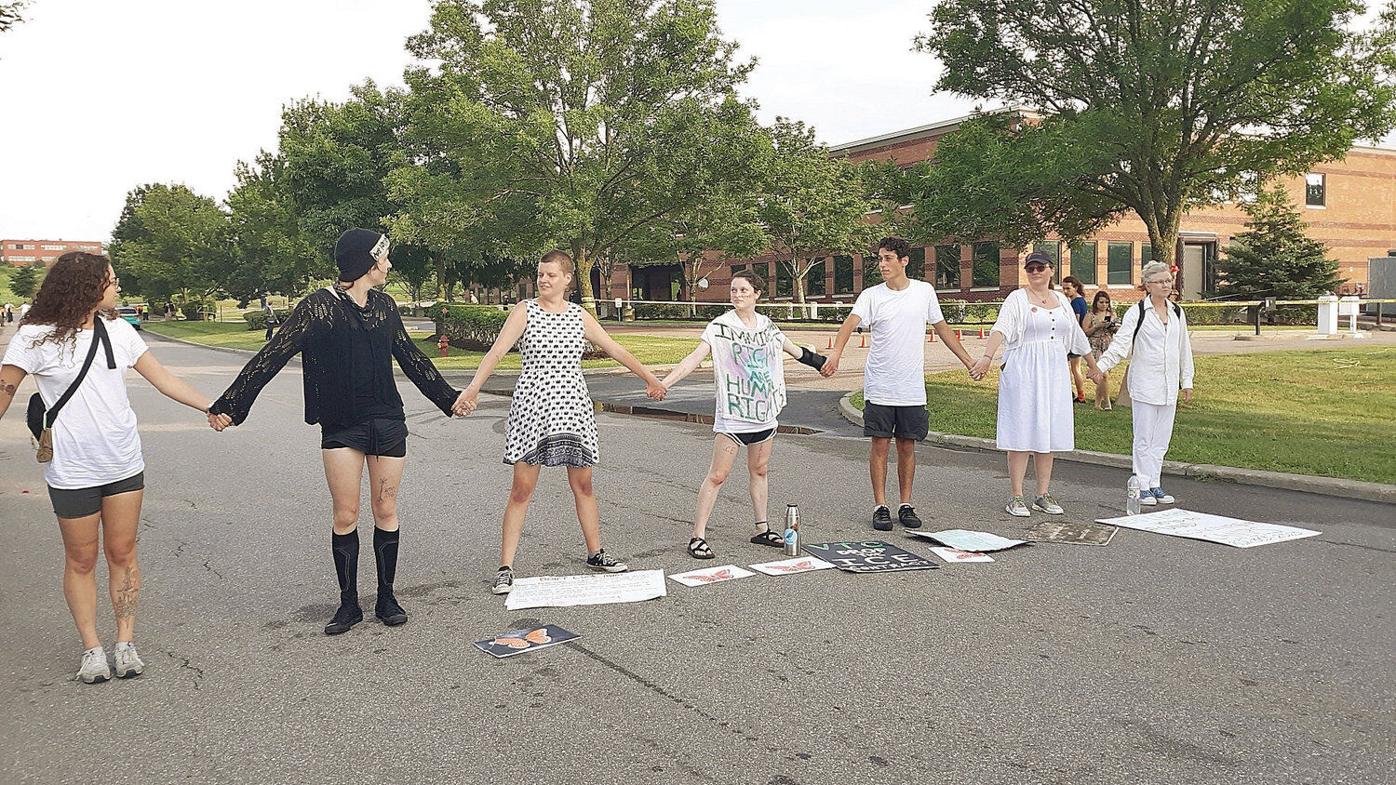 Putney resident Laura Lynette Chapman, second from right, was arrested and cited with disorderly conduct during a protest of the ICE Law Enforcement Support Center on Harvest Lane in Williston on Sunday.

Putney resident Laura Lynette Chapman is arrested by Sgt Josh Moore of the Williston Police Department during a protest of the ICE Law Enforcement Support Center on Harvest Lane in Williston on Sunday.

Putney resident Laura Lynette Chapman, second from right, was arrested and cited with disorderly conduct during a protest of the ICE Law Enforcement Support Center on Harvest Lane in Williston on Sunday.

BRATTLEBORO — A pair of southern Vermont women were among the 20 people arrested and cited with disorderly conduct for protesting at the Law Enforcement Support Center on Harvest Lane in Williston on Sunday.

The center is operated by U.S. Immigration and Customs Enforcement and according to its website is "the largest investigative agency in the Department of Homeland Security."

"I am disturbed that Vermont is hosting a facility that is making it possible for everything that is happening at our border and throughout our country to be happening," said Laura Lynette Chapman, a Putney resident and a member of the Putney Select Board. "This is not the image of Vermont we want the world to see. Our own governor declared we are a welcoming state."

Chapman, who said she did not travel to Williston as a member of the Select Board, noted her decision to do so was in line with a Town Meeting article that was approved in 2017 by the voters of the town. The article states Putney is a town that values diversity and "has a long honorable tradition of being a community that welcomes immigrants and refugees as 'New Americans' and valued members of our community."

The Law Enforcement Support Center in Williston "is a single national point of contact that provides timely immigration status, identity information, and real-time assistance to local, state, and federal law enforcement agencies on aliens suspected, arrested, or convicted of criminal activity," states the website. "The center protects and defends the United States by sharing timely and relevant ICE information with our law enforcement partners around the world." The Center is open 24 hours a day, seven days a week, 365 days a year, and employs approximately 400 people.

The 20 people were arrested after they formed two human chains to block employees of the facility from coming and going into the building.

"History clearly displays the horrors of what happens when civilization does not stand up to a government that has fixed on dehumanizing and stripping a select group of people of their civil and human rights," wrote Chapman on her personal Facebook page.

"The American people have a moral and historical obligation to stand up to America's fascist immigration system and do everything they can to close down these concentration camps by using our bodies and voices to stand with Jews, immigrants, and allies to say 'Never Again,'" said Karlyn Ellis of Bennington, who was also arrested. "It was not right in 1940s Germany, it was not right when the American government put Japanese-Americans in internment camps, it was not right when we colonized indigenous people and kidnapped their children, and it is not right now."

Ellis said she hopes arrests around the country during protests of ICE are "a call to action" and will motivate people to get involved by writing letters to their legislators, donating to organizations fighting for the rights of refugees and immigrants, and boycotting corporations that profit from the detention of immigrants and asylum seekers.

"I want people to take to the streets and demand that ICE be abolished," said Ellis. "The Trump Administration is using ICE to wage state-sponsored terror against undocumented people. People with citizenship and privilege have an obligation to put themselves on the line for our undocumented communities here and all the undocumented people trying to make their way here to make a life for themselves."

Like Chapman, she is disturbed the Center operates in Vermont, a state that purports to value diversity and tolerance.

"If Vermonters are truly committed to family reunification, we will kick ICE out of our state," said Ellis. "The fact that we have an ICE facility shows the extent to which ICE has been able to sneak into every corner of our country right under our noses. I hope that having this ICE facility poorly affects the image of the state because I think that it could galvanize Vermonters into action in a meaningful way."

Nancy Braus, who owns and operates Everyone's Books on Elliot Street in Brattleboro, served as Chapman's "support person" during the protest. Braus, also a Putney resident, was arrested last year during a similar protest and eventually pleaded no contest to a disorderly conduct charge. As Chapman's support person, she was standing by to fill out any paperwork and pay any bail if required.

At first, the protesters were standing on the property of the Center but moved to the street because they were concerned about what might happen if they were arrested by federal marshals.

"The Trump administration is pretty lawless," said Braus. "We've all read the stories of the American citizen stuck in ICE custody for three weeks."

By standing in the street, the protesters were violating local law and were arrested and cited on the scene by officers with the Williston Police Department.

"This is the first time I've ever been part of a civil disobedience action and the first time I've ever been arrested," said Chapman. "I don't see any accountability right now on the part of our government, so I chose to take it on by getting arrested. We need to take our lessons from the civil rights movement and repeat these actions over and over again. People need to go to Williston every day and line the streets until this is over."

"There is no longer any room for nuance," she said. "Any citizen who does not take action against ICE who has the means to is complicit in fascist violence, complicit in the abuse of children."

Chapman said she knows she will be subject to criticism for her "lawlessness," but is willing to engage in a conversation with people who don't agree with her or her methods.

"I would ask them to put themselves in their shoes and imagine if they had to flee to Canada and Canada was treating them the way we are treating refugees and asylum seekers," she said.

The economic and political policies of the Trump Administration, reads a statement issued at the time of the Sunday protest, "have devastated Latin America and other parts of the world, driving millions of people to find sanctuary in the U.S. Once here, they have been met with super-exploitation as cheap criminalized labor, racist and xenophobic discrimination, threats of detention and deportation, and now under Trump, incarceration in concentration camps throughout the country."

The protest called for the closure of the detention centers, the end of family separation and the incarceration of children, and the end of discrimination against queer and trans migrants. The protest statement also called for the freeing of all the detainees and providing funds for their settlement and family reunification as well as freeing Vermont's own Ismael Mendez-Lopez, Mario Diaz-Aguilar, and Ubertoni Aguilar-Montero.

The protest also called for the end of "collaboration and joint training between the Vermont state and local police with federal deportation officials and agencies ..."

Braus said she's not sure what the result of the citations issued on Sunday will be, but if it's similar to what happened to her, the court won't allow the protesters to cite what is known as the necessity defense.

To prevail on a necessity defense, wrote Martin A. Maley, a judge in Chittenden Superior Court, the defendants must prove there is an emergency that is "imminent and compelling" and there is no recourse "to avoid the injury without doing the criminal act." Maley noted the injury must be "of sufficient seriousness to outmeasure the criminal wrong."

Maley also agreed with the Chittenden County State's Attorney's Office that the defendants couldn't enter into the court record White House policies or actions taken by ICE because it would be "inextricably linked to a 'hot-button' political issue, the mention of which may inflame the jury. ... [T]he State argues that to admit such evidence would have the effect of encouraging jury nullification, in contravention to Vermont law."

According to USLegal.com, "Jury nullification occurs when a jury returns a verdict of 'Not Guilty' despite its belief that the defendant is guilty of the violation charged. The jury in effect nullifies a law that it believes is either immoral or wrongly applied to the defendant whose fate that are charged with deciding."

In Suffolk County, in Massachusetts, the district attorney recently announced her office would not prosecute 18 protesters arrested outside the Boston ICE detention center in June.

"Under prior administrations, similar offenses stemming from acts of civil disobedience were routinely converted to civil infractions, which likewise prevented such arrests from appearing on an individual's criminal record," said spokeswoman Renee Algarin.

"I do not have a set policy around protest cases as they depend on the evidence for each case," said Sarah George, state's attorney for Chittenden County. "I have not received the paperwork for these cases yet so I have not made any decisions around charging."

Another march and protest is expected in Williston in August.

"Grabbing children and babies from their parents and throwing them in cages without diapers or mattresses is not something we should accept," said Braus. "We can't live with this level of injustice."

Robert Appel, a Burlington attorney who specializes in civil rights and who represented Braus last year, said while he disagrees with the judge's decision to not allow the necessity defense, he, as an officer of the court, is not allowed to go against a judge's lawful ruling.

"If the Legislature passes a law allowing a necessity defense in the state of Vermont, then I could argue it," said Appel. "But right now, case law is against it. The judge's decision was well founded in the law. I don't agree with the law but I am bound to follow it and the jurors are sworn and bound to act on the judge's legal instructions and produce what I think, is an unjust outcome."

As result of last year's protest, all but two that were arrested agreed to plead no contest. And though he believed the jury mostly had sympathy for the motives of the offenders, it was still obligated to return a guilty verdict under the law.

"As is often said in my line of work, awful but lawful," said Appel. He said the current citations will probably be resolved in a similar manner to last year's charges, unless a judge allows them to argue a necessity defense.