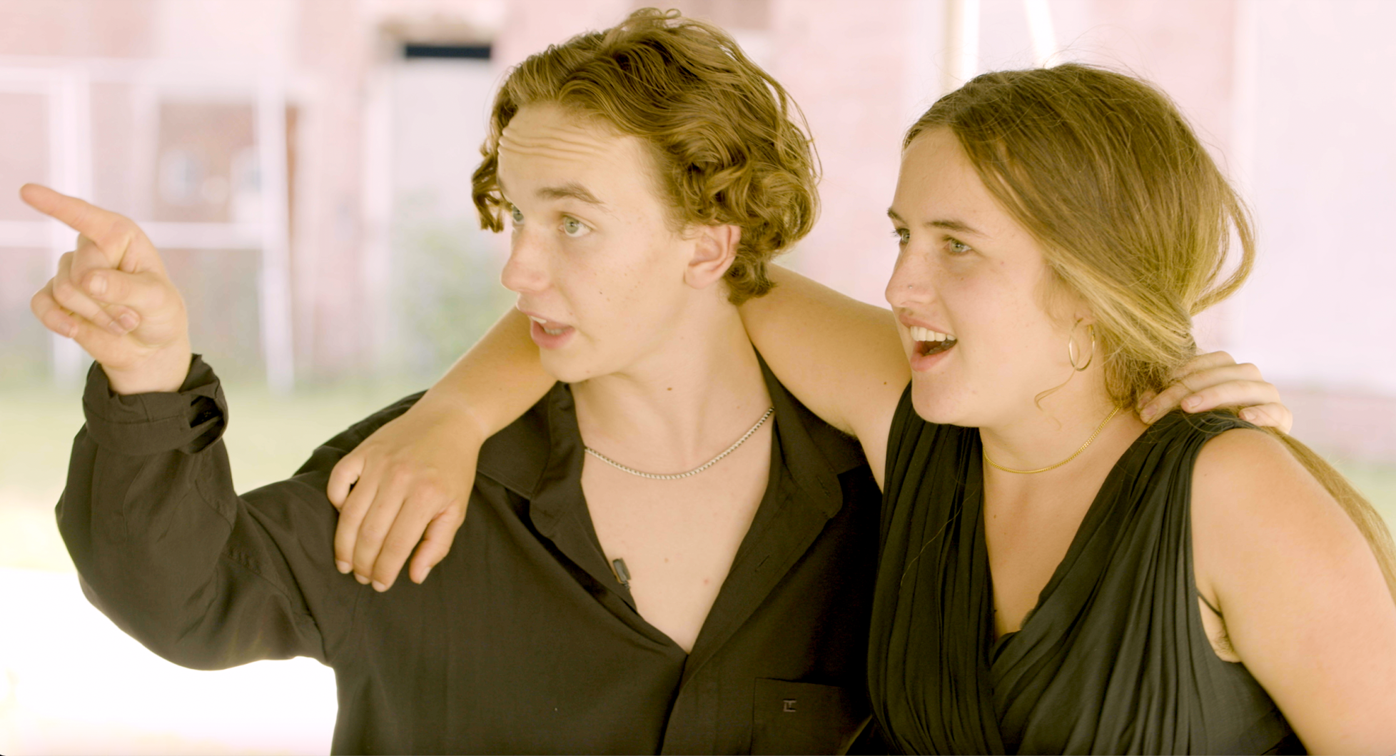 Benedick (Django Grace) and Beatrice (Charlotte Roberts) in the happy-ever-after ending of "Much Ado About Nothing." 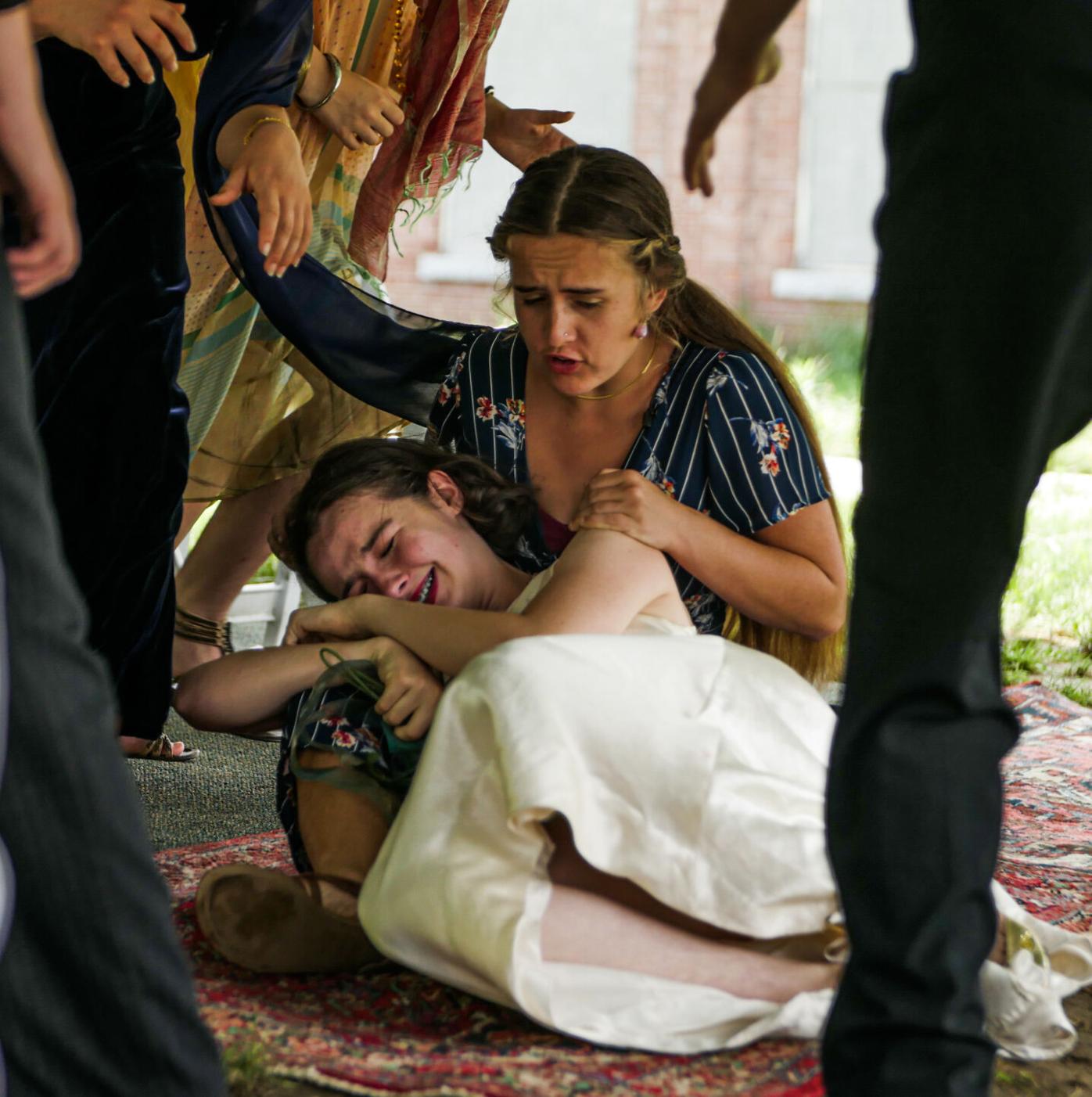 Charlotte Roberts as Beatrice and Isabella May as Hero from the pivotal scene at the wedding in "Much Ado About Nothing." 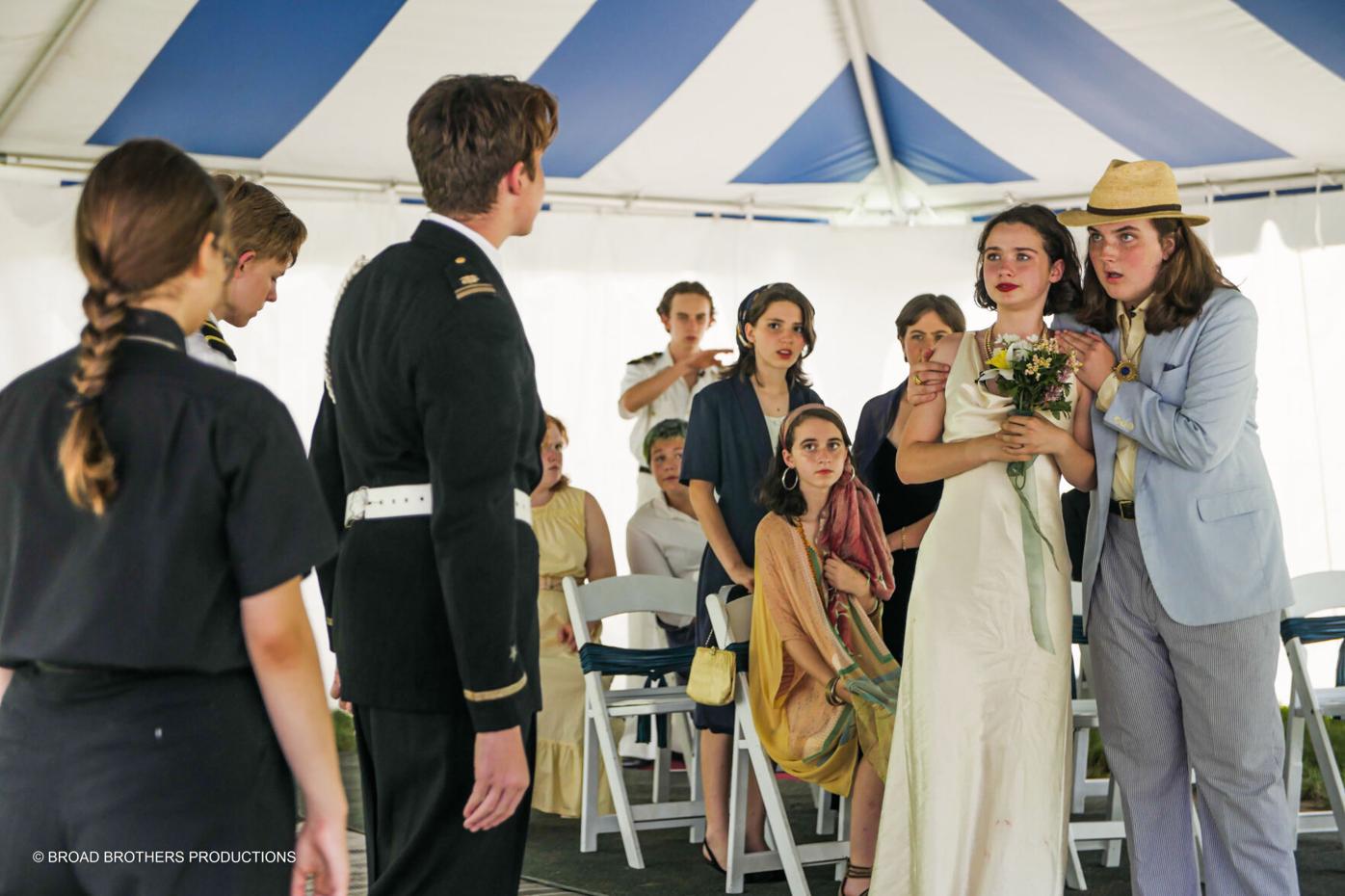 Julius Jensen as Leonato and Isabella May as Hero experience false accusations rather than nuptial bliss in "Much Ado About Nothing." 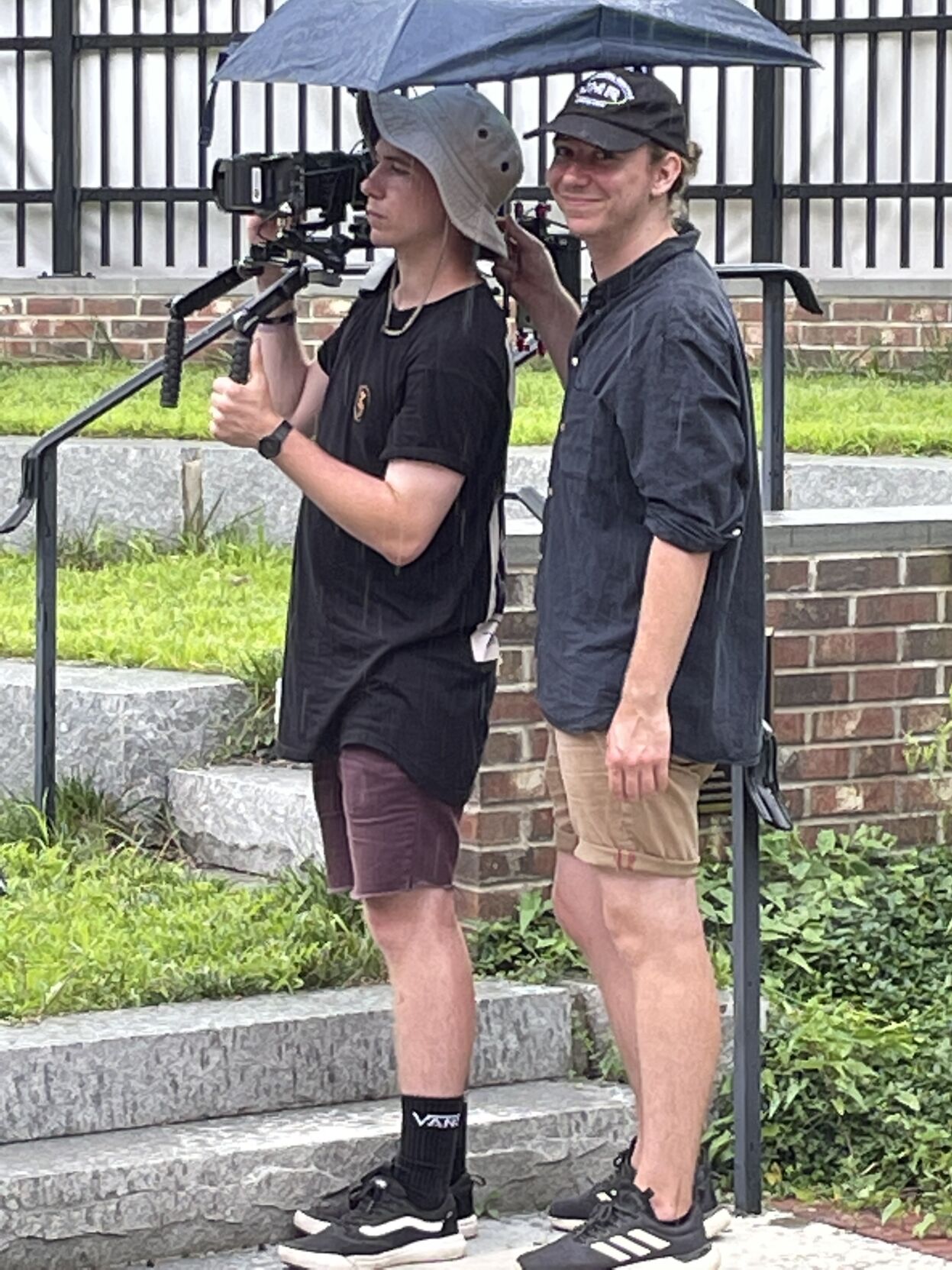 Filmmakers Kaelen and Aja Selbach-Broad brave the rain to get the shot in "Much Ado About Nothing." 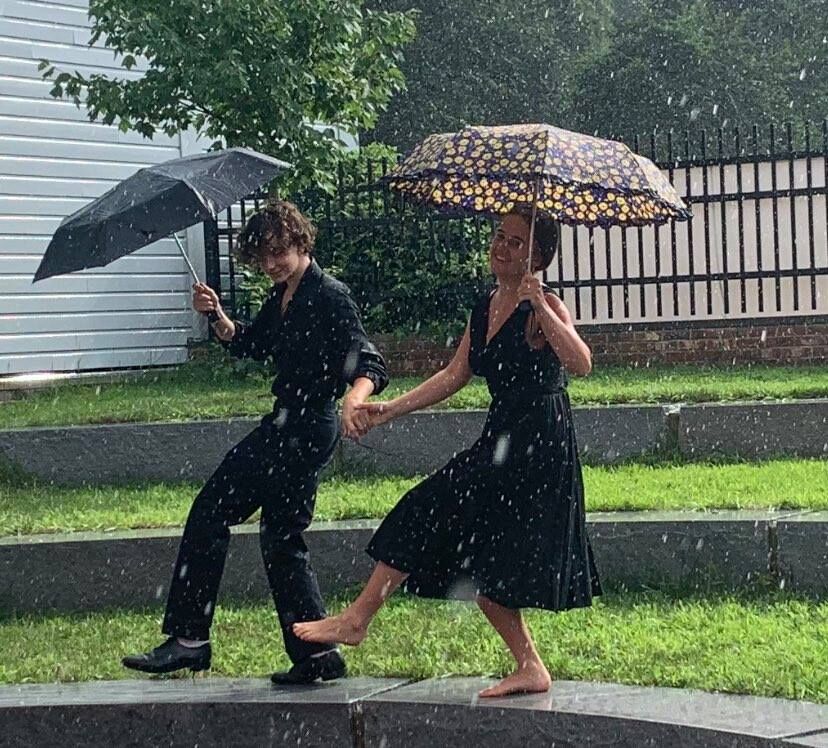 Benedick (Django Grace) & Beatrice (Charlotte Roberts) break into an impromptu dance during a quick summer rain in "Much Ado About Nothing." 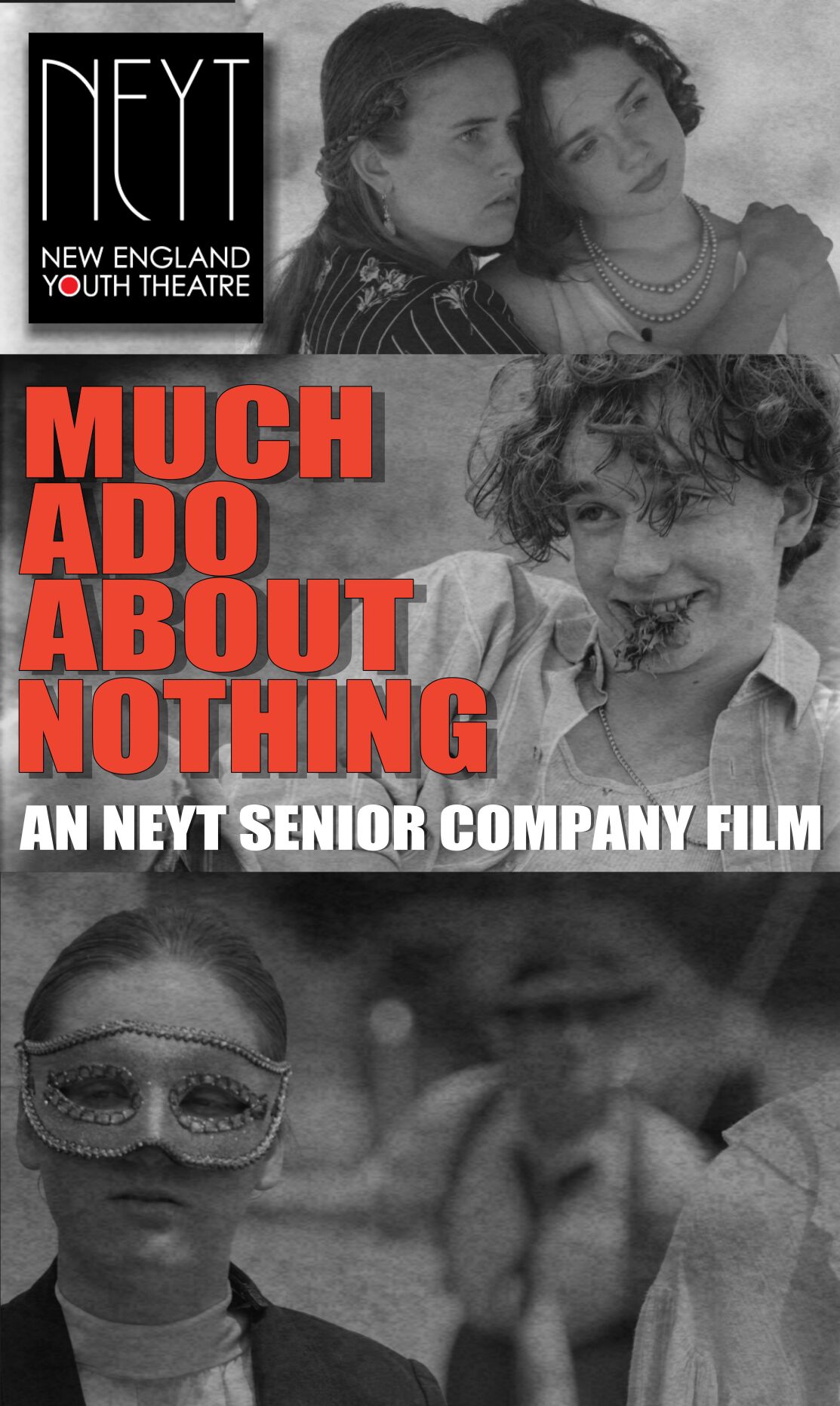 Poster for "Much Ado About Nothing."

Benedick (Django Grace) and Beatrice (Charlotte Roberts) in the happy-ever-after ending of "Much Ado About Nothing."

Charlotte Roberts as Beatrice and Isabella May as Hero from the pivotal scene at the wedding in "Much Ado About Nothing."

Julius Jensen as Leonato and Isabella May as Hero experience false accusations rather than nuptial bliss in "Much Ado About Nothing."

Filmmakers Kaelen and Aja Selbach-Broad brave the rain to get the shot in "Much Ado About Nothing."

Benedick (Django Grace) & Beatrice (Charlotte Roberts) break into an impromptu dance during a quick summer rain in "Much Ado About Nothing."

Poster for "Much Ado About Nothing."

BRATTLEBORO — One of Shakespeare’s most accessible comedies of the heart will be hitting the big screen, thanks to a local theater company and the young people who take part.

New England Youth Theatre’s Summer Shakespeare film project “Much Ado About Nothing” makes its world premiere at the Latchis Theatre on Oct. 12 at 7 p.m. There is a second showing on Sunday, Oct. 17 at 1 p.m.

Twelve student actors and crew members, ages 12 to 18, took part in this year’s first in-person Shakespeare camp after an 18-month hiatus due to the COVID-19 pandemic.

Hallie Flower, executive director of the youth theater, explains, “It’s not all about the actors. It’s about young people participating in all of our roles, costuming crew, lighting crew, sound crew and filming crew.”

The summer of 2021 looked very different from the summer of 2020. This year, the theater held programs for young people from ages 6 to 19, with many programs returning, Flower said. Pit Band and live musical theater came back for outdoor performances, with other programs performed under a big top tent.

“It was a bigger summer than last year which was exciting, not quite as big as normal,” Flower said.

She said the theater company chose “Much Ado” because it would play well outside with lighter dress. “It’s been on the top of our list for a while and has a lot of physical theater in it which gave us a chance to get back to some of our clowning roots and some dancing in it,” she adds.

An alum came up from New York and did a weeklong clowning workshop, then worked with the whole cast on physical theater. Another alum returned to work with our scenic department lights and sounds.

Latchis Arts is sponsoring this film screening so that all ticket sales will go to cover programming and New England Youth Theatre’s Angels in the Wings, which has provided over $20,000 in financial aid and scholarship support to anyone wishing to participate.

Several cast and crew members shared their insights and reflections on this film project. Here they are in their own words:

Keely Eastley, ‘Much Ado’ director, of Marlboro“What stood out to me was the esprit de corps within this cast! They were so supportive and positive as a company, they could take risks and create with joy knowing they were emotionally and creatively safe. It was also a very collaborative process with NEYT alums bringing their experiences from professional actor training programs and professional film school programs as well as extensive work in the profession to these young actors and this project. It was a very healing process for me, to be honest.”

Aja and Kaelan Selbach-Broad, ‘Much Ado’ filmmakers, of Atlanta, Ga., and Brooklyn, N.Y.“The thing that stood out to us this year is everyone’s total commitment and enthusiasm for such a new, crazy, impossible task! Creating theater in a small amount of time is a feat in and of itself, but adding the extra hundreds of elements needed to shoot a film of that same length is unheard of.

“It was surprising that we had so many less COVID-19 restrictions this year, so we weren’t having to split screen around performers who couldn’t be next to one another due to social distancing, no hiding masks in larger scenes, and yet it still ended up being so hard. Much Ado is such an ensemble show compared to Romeo and Juliet. We came in all excited about how much easier this year would be without some of those bigger COVID-19 restrictions, and it quickly became clear we still had our work cut out for us.”

Monica Grist-Weiner, of Brattleboro, ‘Much Ado’ costumer“Much Ado was the first show I’d done since COVID-19 began where I could have real-life costume helpers, three costumers ages 12 to 16. The teamwork brought so much excitement and energy. We had fun with aesthetics on this one. It had to be nautical, wealthy, and kind of preppy enough. We kept asking each other, ‘Is this preppy enough?’ There are so many good characters in this show. I had a team every step of the way and we were really collaborating about what each character needs. We made almost all of the costumes from repurposed materials.”

Isabella May, 13, of Brattleboro, plays Hero“I was surprised about how much I liked film acting. The camera can capture what you’re thinking or feeling and you can do a scene over and over. I had this one dialogue which was in iambic pentameter, even though the whole play was not in (iambic pentameter). It was cool to learn about the rhythm of speaking. It’s fun to hear — it’s like learning a new language, in a way.

“It was a great experience in general. Keely was great. Hallie was amazing! The costumes were so good. In theater you have scene partners and we learned about your relationship with scene partners and how you show that. I didn’t think I’d enjoy learning about Shakespeare, it seemed kind of boring, but it’s not. It’s very interesting.”

Charlotte Rogers, 18, of Greenfield, Mass., plays Beatrice“One of the major things that stuck with me is how caring and appreciative of each other’s time and company the cast was throughout the whole process. COVID-19 wasn’t as much of an omnipresence, as last year, but I think there was a real gratitude and excitement within the cast to be putting on a play at all, which showed up in the way we behaved toward one another and even how we engaged with the material.”

“The other thing that stays with me is, as always, Hallie and Keely’s directing. They’re both geniuses and powerhouses and there’s always so much to learn from both of them, and to have them working together on a project and amplifying each other was a super awesome and educational experience.”

Eben Watson, 15, of Charlestown, New Hampshire, plays Don Pedro, Prince of Aragon“There are so many reasons I enjoyed participating in this project. This has been my third movie so far with another coming out later this year. But this was my favorite by far. It was very hands-on — with them being very aware of the cast and crew’s needs. Playing a role with social power was incredibly fun, and a unique experience I’ll remember for years to come. It was later to my delight that I found out that my character’s part involved an extraordinary amount of comedy work with my co-stars, which I just loved!

“I was thrilled to be a part of the entire production and I would be happy to do it again and again.”

Event: NEYT’s “Much Ado About Nothing” Film Screenings

Advance tickets are available only online at www.neyt.org

Masks are required in the lobby and in the theatre; except when eating or drinking.