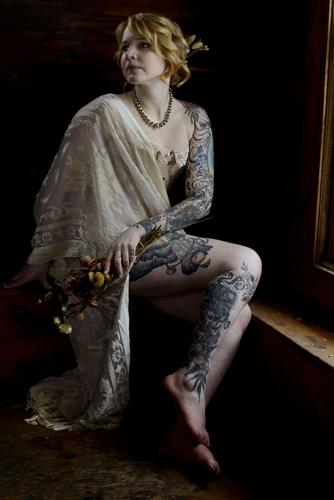 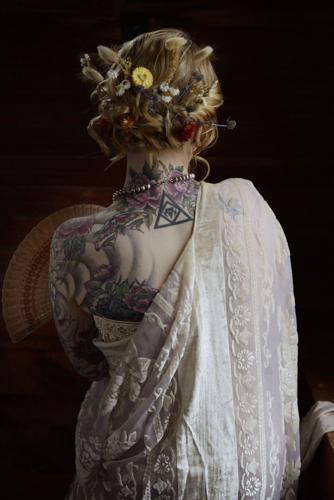 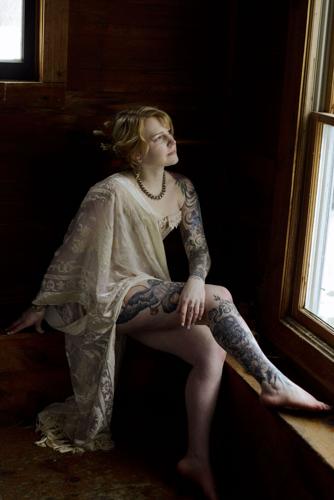 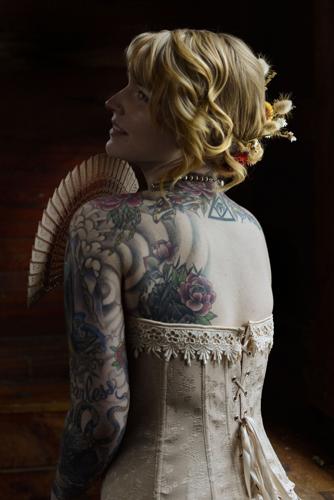 Liz VanDelinder, who goes by Lyz and Liz alternately, is one. Tattoos stretch across her arms, shoulders and legs. And the Burr and Burton graduate is trying to find a wider audience for the tale they tell — she’s entered a competition to become Inked Magazine’s next cover girl.

“I have a lot of good tattoo work,” she said. “I was very fortunate that I ended up working with some really great artists and I just felt like, you know, I’m a canvas myself. Why am I not showing that off?”

Photographer and fellow Burr and Burton graduate Kory Jean Kingsley collaborated on the project with her. They shot the series at the Smokey House Center in Danby with only natural light. They rushed to complete the project before VanDelinder turned pink in the 20 degree weather and unheated building.

She turned to Poshmark for her wardrobe — a corset and shawl.

“My goal was to kind of take a modern approach to the older styles, vintage styles, of beauty and mix them to make something timeless. I think when you start mixing eras like that, you’re not pigeonholing yourself into one thing. It becomes this really cool story.”

She wanted the shoot to explore the space between old and new. “I wanted to take it back to like, a bit of a lawless time and create sort of a lawless beauty in this project, mix in that sort of wild crazy charisma of the mid-1800s. That was a crazy time in this country.”

It was. Much of the modern U.S. was made up of loosely regulated territories at the time.

She also parted ways with traditional cover girl shoots for the project.

Google “Inked Magazine Cover Girl” and you’ll get an eyeful of buttocks. It’s not just that the baring of tattoos makes showing a lot of skin necessary, though that’s true. Inked Magazine has traditionally favored provocative poses. Shoots are splashy, edgy and feature a lot of leather. Women lounge over motorcycles and stare open-mouthed at the camera.

And that’s their prerogative, VanDelinder feels. She wanted to nod to that tradition — she respects it — but also deviated from the script significantly.

“I wasn’t going for their typical image of beauty. Inked Magazine definitely shoots far more explicit imagery. I think most people would say, ‘I wouldn’t put that out on my coffee table.’ And I wanted to shoot something that I could show my dad and kids could see, you know? A strength to an image, a story to an image, not just skin.”

And she understands that tattoos have a cultural significance beyond their skin-deep aesthetic appeal. Women from many cultures have sported tattoos for centuries.

“I am really passionate about Native arts. I’m really passionate about Native spiritualism,” said VanDelinder. “Because (Native) art forms, to me, are the most interesting and inspiring and the roots of creation as far as art goes in this country. And our tattooing has its roots in that sacred art in this country as well. So my goal was to honor that.”

She plans to back her sentiment with her wallet. The contest comes with a $25,000 prize. She and Kingsley plan to split half and donate the other half to the American Indian College Fund. They knew they wanted to give half away, and had originally optioned an arts-centered charity. But when that foundation was recommended by Betsy and Grant Turner, who own Long Ago and Far Away in Manchester Center, the women knew it was the perfect fit.

“Knowledge is power, and you can go anywhere with an education,” said VanDelinder.

And it looks like they may have a shot at the prize. With the public adjudicating the contest, all a contestant needs is a supportive community. And it looks like she’s got one. She’s first in her group and has been almost since public voting began Jan. 18. The first in a series of elimination rounds is coming up Feb. 15.

The town can rally around VanDelinder with daily voting at: cover.inkedmag.com/2022/lyz-vandelinder.

Though she decided to enter the contest almost impulsively this winter, the story has been a while in the making.

“It actually was a terrible tattoo,” she laughed.

Luckily, almost none have been since. One on her thigh, a large hawk, has particular significance for her.

“I had a family member do it up, so someone I really loved and trusted. She’s like, ‘I need somebody to work on,’ and I was like, ‘I’ll come up,’ and I like drove up to Montreal and it just was the first piece I got where I really thought it was gorgeous. I’ve had a lot of work done that I really liked the way I felt wearing. It was what I was looking for. But this was the first piece I had a spiritual connection with. … So that’s my favorite piece I think right now.”

But she was quick to add that she loves them all. “They’re all kind of like your friends and family that just hang out on you all day,” she joked.

She lives in Winhall and has run her own cleaning company, Peregrine Services, since 2016. But a multimedia artist in her own right, she hopes that project signifies a bit of a pivot.

“I’m really hoping to make a switch in my life to be more in the arts in general, whether it’s with visual art or, you know, or this tattoo modeling thing that I seem to be pursuing all of a sudden. It’s been really exciting, just to be more artistic right now in my life.”