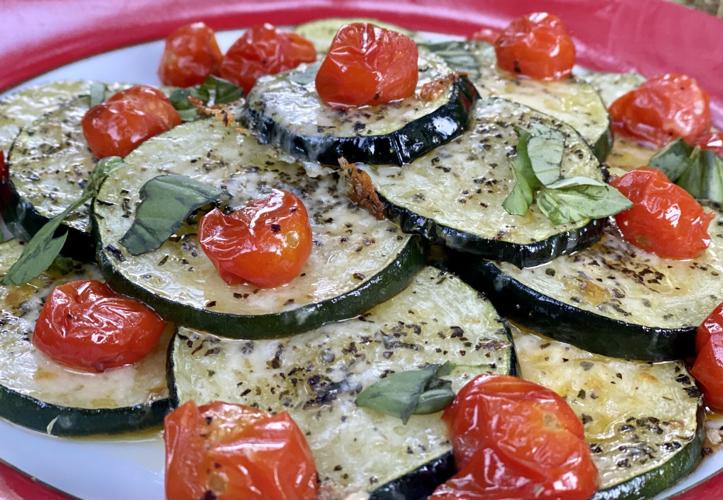 These zucchini "nachos" dish is a healthy snack that can use local produce. 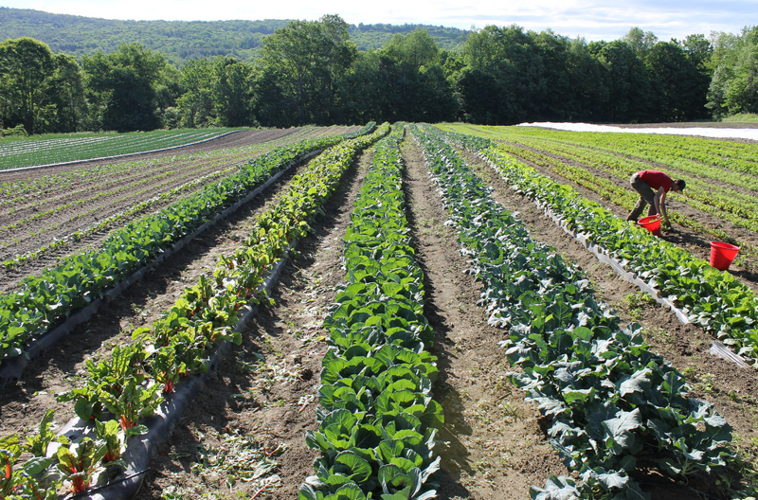 Jack Manix and his wife, Karen, of Walker Farm, met in college and have used their agricultural know-how to nurture plants, produce, trees, children and employees since their marriage in 1973. 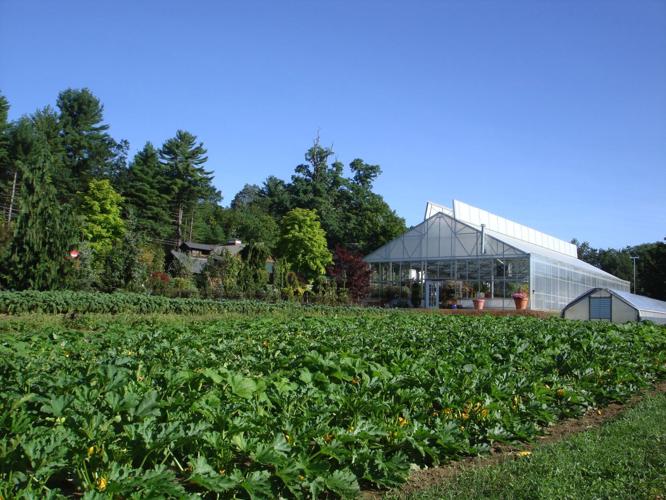 Walker Farm uses integrated pest management (IPM). “We tell our suppliers what kind of bugs we have and they send us the appropriate army of good bugs. We release those in the greenhouse and we don’t have to spray. Nobody likes to spray. It’s healthy for everybody and it’s just been revolutionary,” Jack Manix says.

These zucchini "nachos" dish is a healthy snack that can use local produce.

Jack Manix and his wife, Karen, of Walker Farm, met in college and have used their agricultural know-how to nurture plants, produce, trees, children and employees since their marriage in 1973.

Walker Farm uses integrated pest management (IPM). “We tell our suppliers what kind of bugs we have and they send us the appropriate army of good bugs. We release those in the greenhouse and we don’t have to spray. Nobody likes to spray. It’s healthy for everybody and it’s just been revolutionary,” Jack Manix says.

It’s in the headlines everyday but it’s easy to overlook until our grass turns brown or our gardens get deluged with rain. This summer has been the antithesis of last year as far as rainfall is concerned. Last year our peach tree was overwhelmed with tiny, watery-tasting fruit. This year, I thought she was on vacay before I spotted two dozen large fruits way up high, tasty treats she managed to grow with little water.

“Vermont Strong” license plates remind us of Tropical Storm Irene — a storm we once thought wasn’t possible in our lush and beachless neck of the woods. It rearranged landscapes, including several of our favorite swimming holes, but we recovered and figured it was a one-off.

Perhaps with the exception of meteorologists, few know weather better than those in the business of agriculture. A sixth-generation farmer, Jack Manix has come in from the fields and greenhouses for his coffee break when he takes time to speak with me. His piercing blue eyes cast a kindness toward their focal points and one can see how he left a city life after graduating from Boston University to return to his family’s generations-old farm in Dummerston. He and his wife, Karen, met in college and have used their agricultural know-how to nurture plants, produce, trees, children and employees since their marriage in 1973.

I was going to ask him what his farmland meant to him, but I can tell. It’s an extension of himself — part of his family. He talks about his beloved topsoil floating away as a result of monsoon-like rains. In response, he’s built grass strips between crop rows, taking up valuable farm land to protect the soil from washing away. “A lot of our topsoil ended up in the Connecticut River,” he says with a subtle dismay in his soothing voice.

Manix remembers the good old all-day drenchings we used to get. “We used to get, every now and then, an all-day rain. A gentle, soaking rain, but those are so rare now.”

We’re here to talk about crops and seasonality. I’ve been enjoying the organic bounty from his farm stand all summer, but our topic changes to climate change and pest management, which is a fascinating science in and of itself. They’re noticing new bugs on the farm, he says, and they stay longer, thanks to a three-week lag in the first frost of the fall. “We always were able to predict a frost around Sept. 20 to 25,” he says. “The last five years, we haven’t gotten a frost before Columbus Day, like Oct. 12 or so. It’s like a three-week difference, almost.”

Suddenly, eating seasonably seems like a luxury that may soon be forgotten. The growing season is shorter, thanks to flash rains and long droughts. Things are different, and not good-different. Manix discusses that not only are the frosts delayed, prolonging bug season, but because of the warmer weather elsewhere, new types of insects are traveling north and arriving from overseas. Due to the weather, new diseases are also blossoming, which aren’t quite the kind of blossoms they want to see come springtime. Because most of his produce is organic (they were well ahead of their time in certifying as organic in the 1990s), they don’t want to use any of the sprays deemed acceptable even by organic standards. Instead, they’ve turned to integrated pest management (IPM). “We tell our suppliers what kind of bugs we have and they send us the appropriate army of good bugs. We release those in the greenhouse and we don’t have to spray. Nobody likes to spray. It’s healthy for everybody and it’s just been revolutionary,” Manix says.

As the World Warms

Living in Los Angeles currently, global warming seems to be the norm. Residents are compensated for ripping out their lawns, replacing them with more water-resistant landscaping. With trees the exception to the rule, we are limited to watering our plants a couple of days a week during odd hours. Anyone caught watering more or stealing water (I’m looking at you, Tom Selleck) will be reprimanded, fined and will subsequently have their water rationed after multiple attempts to pilfer life’s coveted pillar of life.

I flee to Vermont in the summers and would gladly endure the winters if my Angeleno husband would get on board. Inundated in water last year, I thought nothing of climate change and its effects on us in the northeast, but this year is different. Talking to Jack Manix, it suddenly becomes clear: Climate change isn’t coming. It’s here.

The implications are wild. The effects are upon us. During the last 115 years, our glorious planet has warmed to the tune of 1.8° F. While that might not seem like much, it’s too much, too quickly and, according to the fourth and most recent national climate assessment, its effects will persist “for decades to millennia,” regardless of future greenhouse gas emissions.

What can we do?

Aside from spending a ton on electric cars, how can we fight this warming trend? Though we might be inclined to throw our hands in the air, there are a few things we can do to lower our carbon footprint.

Local Yocals: Buy locally-grown produce and meats whenever possible. An apple from Fiji has its own carbon footprint to worry about. Buying locally means that the apple is fresher and didn’t have to board a plane to get to us.

Waste Less, Want Not: I’m guilty of being a food waster. I either make too much, or it stays in the fridge too long, but small steps to throw less food out is good for everyone, including the environment.

Power Yourself: When possible, leaving the car at home is a no-brainer way to help stave off climate change. Does anyone remember the panoramic pictures of our planet during the pandemic? The comparison was astonishing. The pictures taken in early March 2020 show our earth clouded with polluted skies, edging toward a brown hue. During the lockdowns, there it was, seemingly healed. Crystal blue skies, not a plume of smoke in sight. They may tell us that there’s nothing we can do, but those pictures tell a different story. Walking or biking rather than driving is a small step we can take. And it might just be enjoyable.

The Scoop: According to the Sixth National Climate Risk Assessment regarding hazardous heat that was published on Monday of this week, Vermont currently experiences seven days over 91°F. While that sounds brutal enough, over the next 30 years, that number is expected to rise to 16, representing a 128 percent increase in hot days. We may have to plan to spend more time inside in front of a fan, but our crops won’t be that lucky.

Manix talks about the direction in which he and his family plan to take the farm. He wants to play small ball, he says, making lots of small, positive changes. As for climate change, he’s looking into electric tractors. “It’s gonna be a changed world. That’s for sure.”

Thankfully, for now, we can still count on one thing: fresh, organic produce at the Walker Farm farm stand and the friendly faces who work there. Manix says his employees are like family. Many have been part of the family for decades and he hopes to keep it that way. After all, it’s a family-run farm.

(adjust all seasonings according to taste)

Place tomatoes between rounds and rub with olive oil from the pan.

Bake for ten minutes or until tender.

Sprinkle grated cheese on each disc.

When ready to serve, place back into oven, broiling for 2 minutes.

These are kid- and crowd- pleasers!