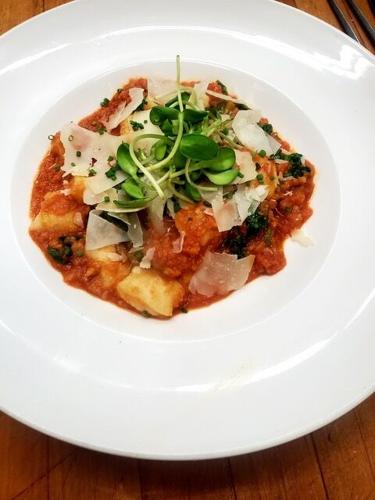 Cauliflower Bolognese is a popular dish at Peter Havens Restaurant in Brattleboro. Now, you can make it at home. 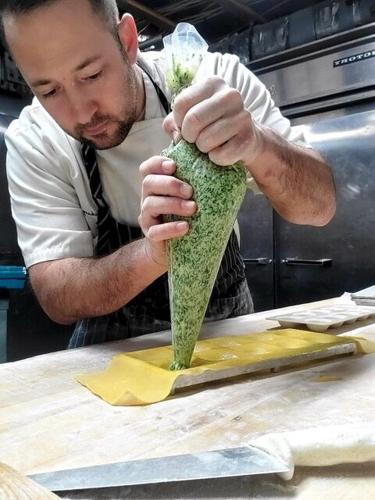 Zach Corbin is chef and owner of Peter Havens Restaurant in Brattleboro.

Cauliflower Bolognese is a popular dish at Peter Havens Restaurant in Brattleboro. Now, you can make it at home.

Zach Corbin is chef and owner of Peter Havens Restaurant in Brattleboro.

Though Vermonters have long known all there is to love about the Green Mountain State, many who fled the cities at the onset of the pandemic have been pleasantly surprised to witness the Vermont pride taken in culinary skill and presentation. Reeling from COVID-induced staffing and supply issues, countless restaurants have folded or been forced to reduce their hours. Not so with Peter Havens, the chef-owned, highly sought-after establishment that has been there, for many of us, as long as we can remember.

Vermont restaurants essentially established the phrase "farm-to-table" just by doing it long before it became a national phenomenon. With so many talented and artistic sponsors of cuisine within our borders, there are many restauranteurs from whom to choose as we commence this monthly spotlight on Vermont chefs.

A Neighbor Among Us

Some of our restaurants in Southern Vermont are quite literally historical figures and are as much members of the community as are our eldest residents. One such figurehead is Peter Havens Restaurant, established Feb. 23, 1989, in Brattleboro. Having recently won not only Keene’s Best Downtown Brattleboro Restaurant but Best Bar as well, it may be one of the oldest restaurants in town, but, defying its age year after year, it maintains its status as one of the hippest places to be this side of the Connecticut.

Though the restaurant is nearly as old as its chef owner, Zach Corbin, it playfully beckons in weary travelers and hungry locals with a stellar menu of items honed by Corbin and rooted in his gourmet French and Italian culinary training.

More confident now than the shy kid I playfully waved to each time he performed with our high school band as a drummer, Corbin now adeptly wields kitchen utensils in lieu of drum sticks. Going on 10 years as chef and owner of Peter Havens, Corbin attributes his success to adaptability. He regales me with stories of catering lunches for the employees hired to decommission Vermont Yankee during the initial phase of the pandemic.

“I called the boss and said — I’m not doing anything, your guys need meals — let’s work something out.” And work something out they did. Corbin used his kitchen to cater 180 meals a day for weeks until budget restrictions ended the arrangement.

The Secret to Success ...

Adaptability could be his middle name. Corbin started as a dishwasher at Three Mountain Inn in Jamaica, replacing his sister, Ashley, and worked his way up through salad prep to line cook. Though he later trained with the best from Nantucket to Marco Island, Florida, Zach returned home to Vermont to buy a food cart. He had foresight, not to mention guts, when he approached Thom Dahlin and Gregg Van Iderstine, the founders of Peter Havens, about renting their now-patio space for his food cart. There, he sold burgers, hot dogs, veggie burgers and lemonade for two years, garnering a following that included the then-proprietors of Peter Havens as daily lunch customers.

When it came time for Gregg and Thom to move on, it was without question that Zach was their guy.

“We said, 'what, are you going to sell hamburgers and hot dogs at Peter Havens?' He said, ‘No, I’m a gourmet chef,’ (He’s) the most honorable, nice guy I’ve ever met.” Thom Dahlin has nothing but kind things to say about Corbin. “He’s fair, honest, creative and hardworking. I can’t think of enough superlatives to describe that guy. He’s just the best.”

Prepping for another busy night (business has been up 300 percent since the start of the pandemic), Corbin tells me how easy his oatmeal spice cake is. “You just cook oatmeal as you normally would, and then weigh out your dry ingredients, and alternate them with the oatmeal while mixing in the flour. You just bake that and then make the rum walnut glaze.” He goes through a head-spinning 12 more steps before he sends me a photo of the cake, dressed to perfection with a crème anglaise and berries. My mouth waters, but I’m still stuck at the recipe’s second step.

If he can whip up a spinach ravioli with fresh pasta while dazzling me with his cake recipe, it’s from years of hard work. Having apprenticed with some of the best, Jean-Charles Berruet and Alberto Veretto, Corbin has been refining his technique and culinary expertise since he started in 1999, washing dishes in the kitchen.

After buying Peter Havens in 2012, Corbin combined his business acumen with his kitchen skills and quickly expanded the restaurant, taking the area where his food truck used to be and turning it into the now much-appreciated outdoor patio adjacent to the restaurant. His plans don’t stop there. Corbin is currently setting up a bar in the front area to allow for the overflow from the sought-after seats at the restaurant’s bar. This one will have another touch of flair, in that it will serve as Brattleboro’s first dedicated raw bar. Corbin said Peter Havens has become known for its oysters, very often shucking 400 to 500 a week.

While Corbin doesn’t subscribe to any particular dietary theories except for eating quality food and enjoying it, he makes sure he uses exceptional ingredients, sourced locally when possible. I feel as though I’ve been given a gift when he tells me a little secret about French cooking. He uses Kosher salt and only white pepper. In French cooking, he says, the chefs don’t want the specks of black pepper to make the dish look dirty. Incredible. Other than white pepper, his theory remains that good food, good friends, a little tequila and a passion for your work is what matters most, second only to kids and family.

I couldn’t agree with him more. And I know what I’m ordering next time I’m at Peter Havens.

Using a food processor or grinding attachment for a Kitchen Aid mixer, grind the cauliflower, carrot, celery and onion together with garlic, rosemary, sage and thyme until they are a coarse texture.

Sauté veggies in a large sauté pan with olive oil until lightly browned.

Transfer veggies to a rondeau (or a deep frying pan).

Deglaze the sauté pan by adding red wine and cooking for 5-10 minutes or until the alcohol has cooked off.

While the wine cooks, add the tomatoes to a bowl and pulse with an immersion blender to break apart. (I used my food processor again).

Corbin serves his with broccolini over freshly made gnocchi as a vegetarian dish or with imported pasta (hold the cheese) to make it vegan.

Katharine A. Jameson, a certified nutrition counselor who grew up in Williamsville and Townshend, writes about food and health for Vermont News & Media. For more tricks, tips and hacks, find her on Instagram: @foodforthoughtwithkat