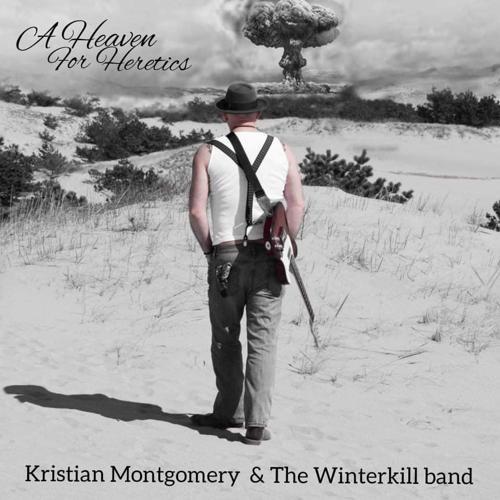 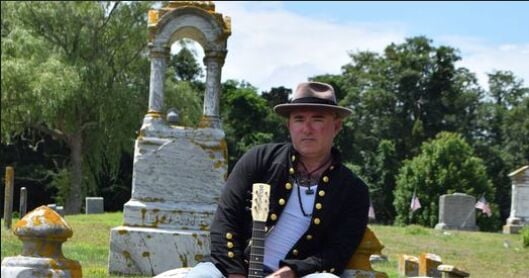 Kristian Montgomery will play a solo show at the Collective Lounge in Brattleboro on Feb. 4.

Kristian Montgomery will play a solo show at the Collective Lounge in Brattleboro on Feb. 4.

SOUTH WALLINGFORD — Kristian Montgomery had just finished band practice the other night, and had a few minutes to talk with a reporter on the phone — interrupted at first by a small squabble involving his pet cat and coonhound. “Excuse me, I have to break up this fight.”

The singer-songwriter and guitarist — once a metal vocalist, now the frontman for a hard-driving, country-rock band — had to get up early the next day for his job in a hospital engineering department.

“I do that Monday through Friday,” Montgomery said. “Gosh, how awesome would it be to do this (music) as a day job, but ... It was at one time, and I’m trying to get back there. The lofty heights of super-stardom are still on the horizon.”

Montgomery, 49, lives on a farm with his wife, April, surrounded by a virtual menagerie of animals — “too many goats and horses and chickens and ducks and turkeys, and a pretty good vegetable farm,” he said. “It’s a lot of fun. This is all my wife’s doing. When I started performing music again, my wife always wanted to have her own horse, and we were able to make it happen. I’ve supported her in her dream, she’s supported me in mine.”

Like his wife, Montgomery, who will play a solo show at the Collective Lounge in Brattleboro at 9 p.m. Feb. 4, is the child of a Boston-area fisherman. His blue-collar roots have shaped his work ethic, inspired his songs, and color his music to this day.

“I grew up fishing in New England with my dad and granddad, that was the family trade,” he said. “We came up here to visit a cousin in Manchester who’s a chef, and we fell in love with this area. It’s just beautiful. So we sold our fishing boat and moved up here. It was a weird change. I had just been nominated for the Boston Music Awards and the New England Music Awards, and then just decided to abruptly leave. It was a good decision.”

He credits his church minister, the Rev. Robert Mackie, a former tenor for the Boston Pops, with introducing him to music — but he also gives a nod to his tone-deaf grandmother.

“My grandmother sounded like Ethel Merman, and she forced me to go to church,” Montgomery said. “And when we sang in church, everybody would stare at us, because my grandmother had such a terrible voice. But that didn’t stop her. So the only way for me to protect myself was to sing louder than her, and when the reverend heard me he thought my voice was beautiful.

“We were poor, coming from a tradesman’s family ... and he gave me free vocal lessons, and it exploded from there. He introduced me to the Beatles. It was all over after that.”

Inspired by his father’s work, Montgomery took to barrooms to sing sea chanteys, as well as Celtic and Scandinavian songs of fishermen’s homecomings. Eventually, his big voice, comparable to the late Chris Cornell of Soundgarden, made him a natural fit for Boston hard rock band Bone Dry System in the 1990s.

But his music has evolved to a place that’s hard to pinpoint. One journalist coined the phrase “Appalachian Rock” to describe his sound.

“It’s been cool,” Montgomery said. “People have been saying, ‘I don’t know who these guys sound like.’ They throw out stuff like, Gov’t Mule meets the Allman Brothers, and others say it’s like Chris Whitley met Queens of the Stone Age. I think I’ve kinda come into my own in this last decade of trying to find my own voice. It’s kinda cool to have people say, ‘You’re kinda here but not quite.’ Better than having people put their finger right on ya and saying, ‘You sound like this guy.’”

“I’ve always been a huge Townes Van Zandt fan,” he said. “I just found him to be honest, and that’s all I expect out of people who are writing songs, especially in this day and age. It’s almost like you turn on the radio to listen to propaganda. It’s lulled everybody to sleep. There’s not a lot of songs with substance, or songs that make you feel anything other than, consume more, buy more.”

He said his concert performances — especially in an intimate setting like The Collective, when it’s just him alone with a guitar — are partially inspired by Men at Work front man Colin Hay.

“I’ve always loved the way that he could tell a story, even while he’s playing the introduction to songs,” Montgomery said of Hay. “He’ll start telling you about the purpose, or the inspiration, and some of the music that I’ve written over the last couple of years is very funny.”

Montgomery has made four albums in three years with his Winterkill Band. The first three were recorded with friends in the Boston area, including producer Joe Clapp. The fourth, the upcoming “Lower County Outlaw,” featuring the folksy single “Gypsy Girl,” was produced by Andrew Koss, who previously engineered recordings by Alicia Keys and John Legend, and now owns The Studio at Strawberry Fields Lane in Manchester.

“I went in there with a hodgepodge band, most of them retired and in their 70s, and we’d get together and have these little bluegrass jams,” Montgomery said. “I’m not much of a bluegrass player, but I appreciate the genre. I was going to do a six-song EP ... and (Koss) said, ‘We need to do six more to be Grammy-eligible,’ and I said, ‘You know who I am? I’m Kris, I never catch a break, I’m not going to get a Grammy.’ But he said, ‘We’ll definitely get on the first ballot, I don’t know about the second.’ He’s just all in on this.”

Montgomery’s career has had its ups and downs, but is clearly on an upswing. It’s still not to the point where he can quit his day job.

“There’s no such thing these days as an artist being able to do this full-time,” he said. “Although the current technology has made music more accessible, and more makeable, to everybody, getting it to the masses is just as difficult as it’s ever been. It’s not like you go to a bar any more and a guy is pouring his heart out with a guitar and that artist takes off. And the record labels, when they sign people now, they’re not giving you money to go out on the road. They want you to be able to do it on your own, so you have to come from privilege.”

At the end of the conversation, Montgomery was informed by this reporter that rock legend David Crosby had passed away earlier that day. While he admires Crosby’s music, he said he was more emotionally affected by the death of British guitar great Jeff Beck the week before.

“We’re losing our heroes, one by one. But I’m still here, ready to take over,” he said with a laugh. “I’ll do my best to fill the void.”