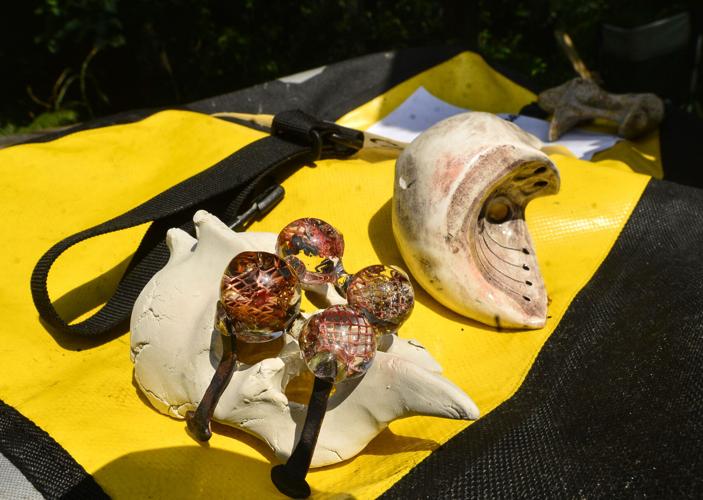 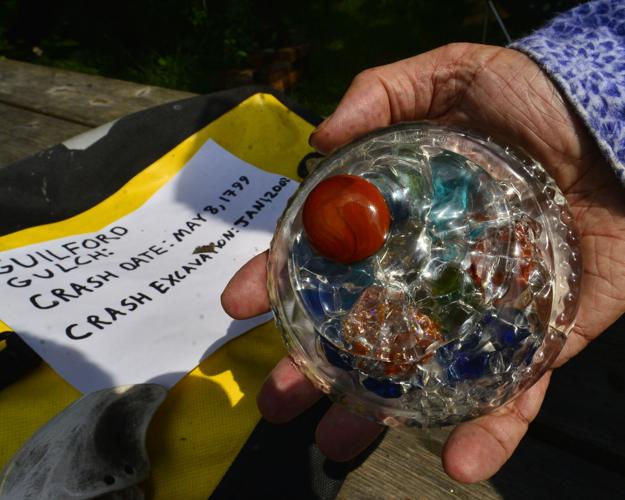 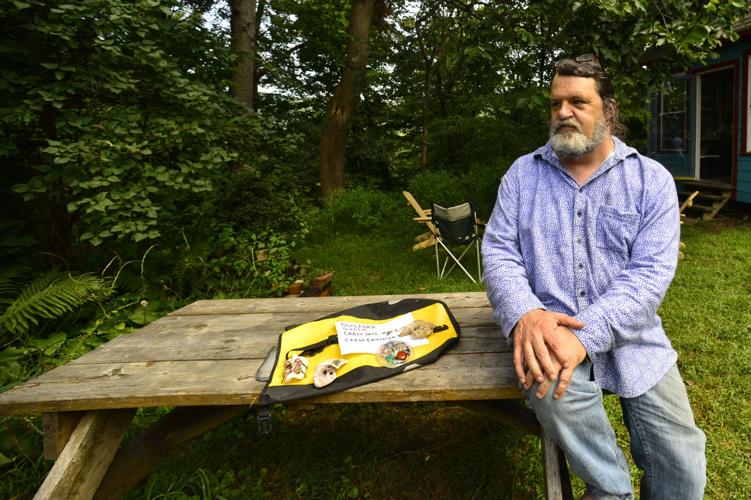 BRATTLEBORO — Unidentified flying objects may have crashed downtown, according to local residents who have a questionable past when it comes to such matters.

“I can confirm that we have found bones — alien bones, not human bones,” Rolf Parker-Houghton said. “I don’t want to reveal much. It might just be a rock. I don’t know what it is. There’s something else there.”

At Gallery Walk in Brattleboro, from 5 to 8 p.m. Friday, “The University of Brattleboro’s Department of Archaeology and Paranormal Investigations” will be hosting an event that is appropriate for all ages. Digging for artifacts is set to begin at 6:30 p.m. at “Lawton’s Field,” which is at the corner of Elliot and Church streets.

During an interview by Zoom, Rolf and his wife Cynthia Parker-Houghton copped to a scandal that happened a decade ago in which the couple was caught launching fake UFOs off a parking garage in downtown Brattleboro. It wasn’t meant to deceive people, but have a laugh, Rolf said.

Balloons were tied together and had LED lights. They were reeled in after going into the air, Cynthia said.

“Dr. Balderdash was outraged that we had done this,” Rolf said, referring to a character involved in the latest project.

Dr. Balderdash is said to have strong opinions on UFOs.

Rolf founded the University of Brattleboro, where he now serves as “dean.” The school is described in a past report as “a project that combines fun with local history to create entertainment for the community.”

Rolf and Cynthia have participated in a number of UFO projects over the years.

“This is the first crash site that we’ll be ‘investigating,’” Cynthia said, using air quotes.

Erin Maile O’Keefe, who helps coordinate the Artful Streets project in Brattleboro, invited Rolf to make use of the area in front of “Lawton’s Field” during Gallery Walk. Rolf said Dr. Balderdash confirmed the property is a crash site, dating all the way back to 1811.

According to reports detailed on brattleborhistory.com, a child put black powder in a paper lantern and sent it into the sky with a kite.

“It went boom," Rolf said. "It very much impressed the people of Brattleboro back then.”

People thought it was a celestial omen, Rolf said. But he always insisted the incident involved a UFO.

Over the years, he has organized similar events with a historical angle. He said Brattleboro is “a great town” but it has its challenges and issues.

“I can’t fix everything but I can give people a reason to get together and have fun and laugh hopefully,” he said.

Before Cynthia met Rolf, she was making artifacts and burying them. When they got together, she said, they began collaborating.

“Dr. Rea L. Faux” makes props for the events but Dr. Balderdash is adamant that the UFO artifacts and alien remains at the site are real, Rolf said. “Dr. Quantapath” will have the scientific equipment used for discovering the objects.

“I’m hoping they’re not too far down,” Rolf said.

“Maybe there is something out there,” he said. “I don’t know.”

Murchison said he never looked for UFOs or paranormal items before, but he collects and invents items that deal with “radioactive stuff.”

“I think it will be fun,” he said. “That’s an old part of town and it’s had folks messing around for lots of years. Who knows what I’ll find? Plus, it’s Gallery Walk. So it should be a pretty fun scene.”

If any money is raised during the event, Rolf hopes it will be used to purchase a small plaque to put up at the site.

Cynthia is a member of the Harmony Collective Artist Gallery and is thinking of putting up some of the artifacts for sale once they’re verified by Dr. Balderdash. She’s also considering a T-shirt design to celebrate the site.

The response to the announcement of the event on Facebook has been “very strong,” Rolf said, hoping more alien artifacts from crash sites come forward as a result.

“We can reveal that we have an amazing video that has unidentified flying objects in it, flying above Lawton’s field,” he said. “We just happened to be out there Sunday (Aug. 24). Dr. Balderdash was there and he pointed out there they were.”

Scaggs said the two groups reach out to as many people and organizations as possible to “try to dream up some really cool interactive art activities that then get scattered throughout the event downtown.” Usually, that results in five to seven stations set up at each Gallery Walk with links to another local figure or organization.

“The main intention of Artful Streets is to showcase the concept that art can happen anywhere and it can be by anyone and that all of us have some little shred of artistic inclination within us,” Scaggs said. “And we’re hoping to provide space for people to find theirs and celebrate it.”

Gallery Walk team member ella szutu moved to Brattleboro within the past year with a goal of allowing “my own inner artist to come out because I’m inspired by everything I see around here” — and hopes Gallery Walk similarly inspires others.

“I really believe that we are direct experiences of our environment, and when you show up to Gallery Walk and you are organically inspired by the art and artists around you, that your inner artist comes out and art supports art,” szutu said.

September’s theme for Gallery Walk is Technicolor Town. It’s “all about color, in many many shapes and forms,” the Downtown Brattleboro Alliance said in a Facebook post.

The Ditrani Brothers will perform from 6:30 to 8:30 p.m. on Elliot Street. Scaggs said organizers never know what other musicians might pop up for performances downtown during Gallery Walk.

“The new, revamped Gallery Walk is really trying to celebrate art in all its forms so there’s been a lot more performance art,” she said. “Sometimes, it’s quite hard to fit it all in one event. Sometimes we run into feeling it’s so jampacked with activities and content that you almost can’t get to all of it, which is a great problem to have but definitely something we’re looking at.”

In addition to all the “amazing downtown restaurants,” Scaggs said, organizers knew more food options would be needed so attendees can eat in a timely fashion. Food trucks or vendors are set up on Elliot Street or in the Harmony Parking Lot.

Organizers are cautiously optimistic about turnout.

“We started this series with a bang in May just as all of our community’s energy really felt like it was flowing towards being ready to meet and gather again,” Scaggs said. “It was feeling more and more safe, and the weather was getting nicer. We just unveiled it at this perfect moment of all of those variables lining up.”

Gallery Walk was well attended again in June but then met rain in July, Scaggs said. Attendance was down in August, which she attributes to vacations and COVID-19 infections being on the rise.

For the upcoming event, attendees are encouraged to consider wearing masks in crowded areas indoors and outdoors. Sixteen of the 18 art galleries participating will require masks inside.

“We hope these steps will help people continue to venture out,” Scaggs said, anticipating that some people may be out of town for Labor Day weekend. “The only predictable thing in Brattleboro is unpredictability so I’m just surrendering and being flexible.”

Scaggs noted Rescue Inc. sets up a vaccination clinic at every Gallery Walk.