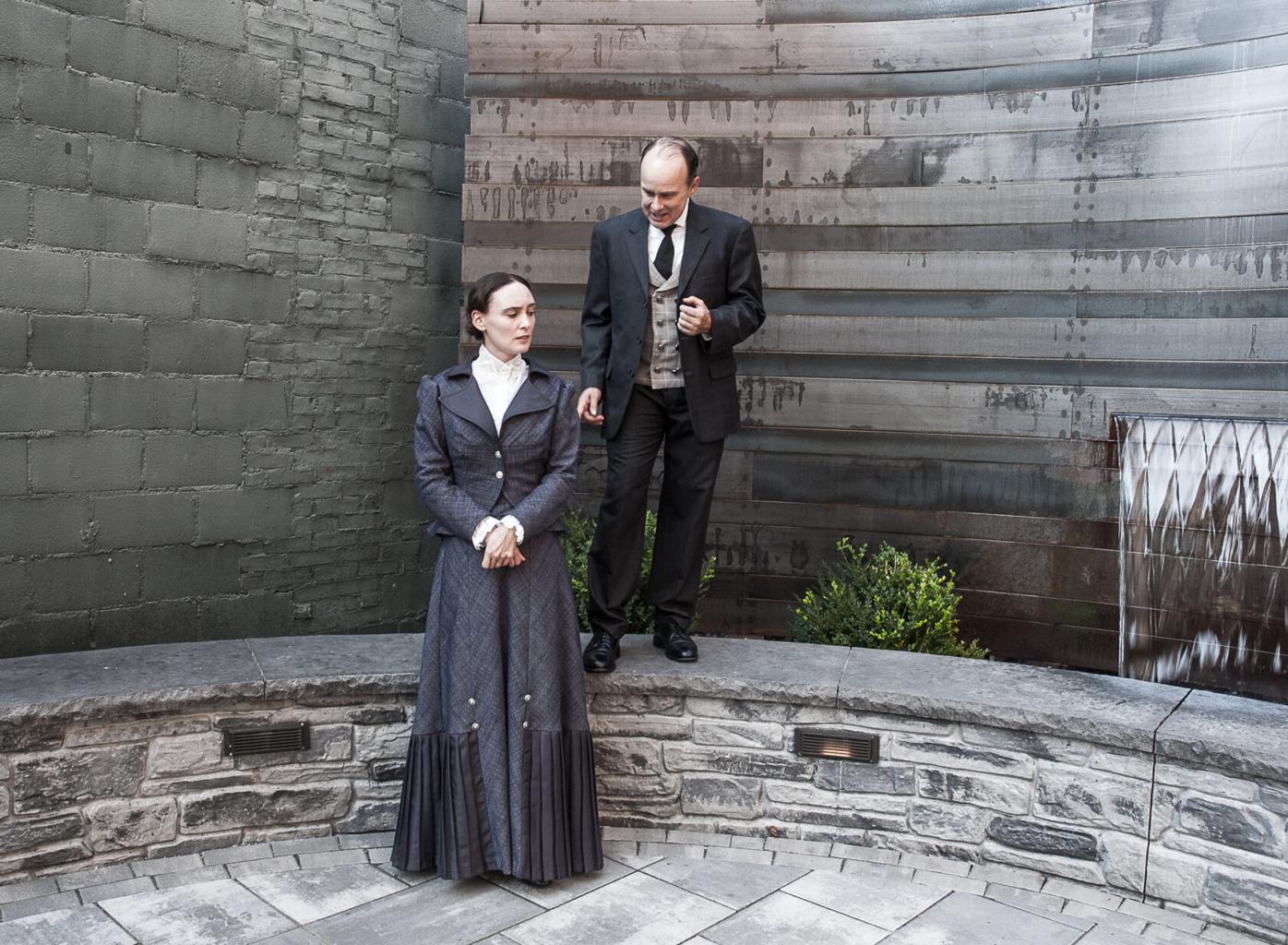 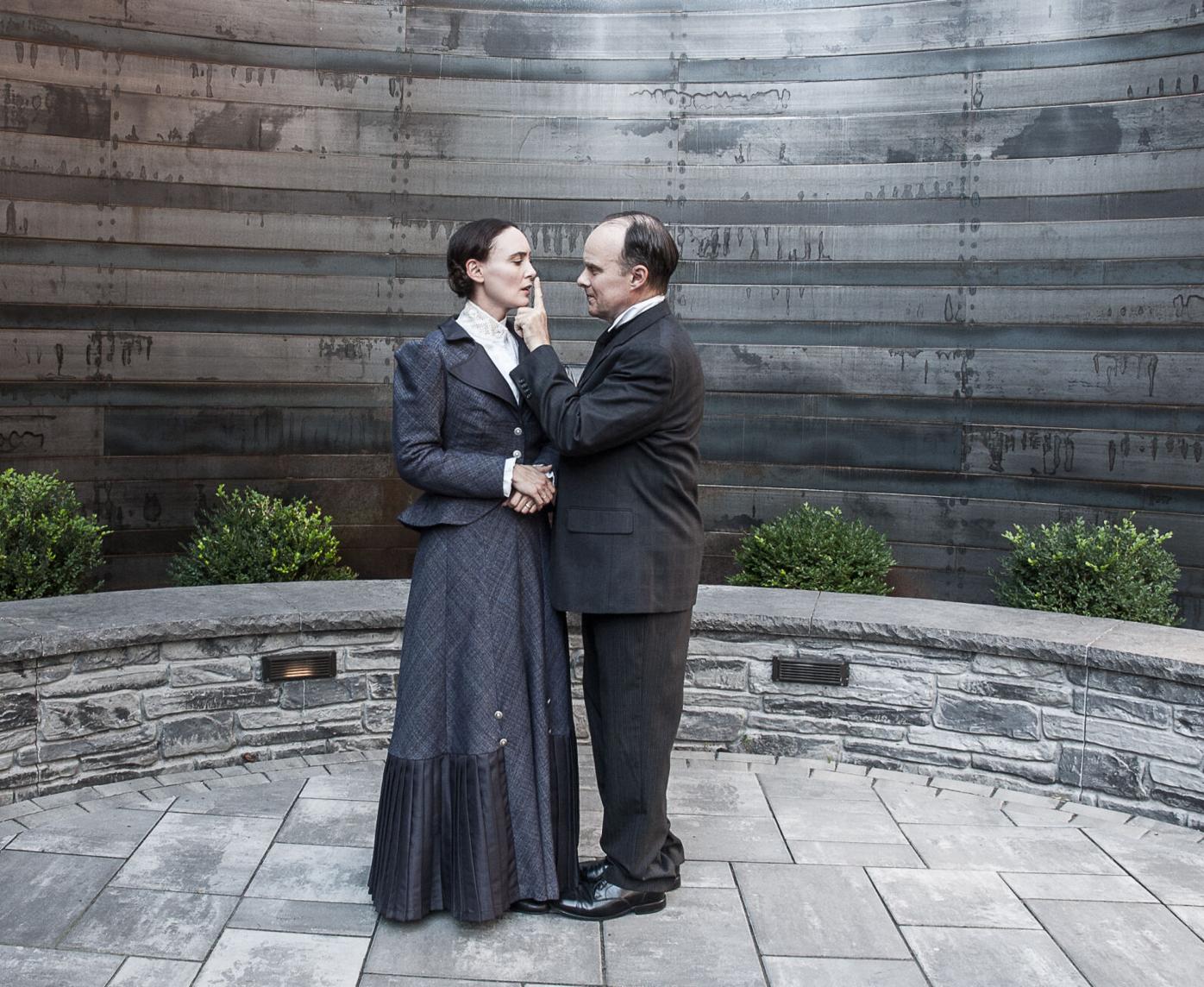 BENNINGTON — If you want to approach fall in a mysterious frame of mind, then look no further than Oldcastle Theatre Company and go soak up a closing performance of the dark thriller, “The Turn of The Screw.”

Directed by Oldcastle newcomer and well-known TV actor Jillian Armenante, the production stars one of the company’s longtime favorites and North Bennington local, Oliver Wadsworth as far too many characters to name and count here, and another Oldcastle rookie, Rebecca Mozo as the Governess, perhaps one of literature’s most reviled villainesses.

The play tells the story of a Victorian-era governess, who is hired to care for two orphaned children. After learning of the deaths of her predecessor and the former groundskeeper, she is haunted by the images of their ghosts. On top of all this, enter multiple other characters to add to the twists (and there are many).

For those familiar with the story, it’s much like James wrote. Hatcher’s version puts the onus on the audience to decide if the ghosts are real, or merely figments of the imagination. Not only does the play examine the power of human creativity, but it asks audiences to dig deep into their own imaginings in fascinating and inventive ways.

If her actors’ performances are any indication of the efforts and insight which Armenante put into preparing them, then we must bring the veteran actor-turned-fledgling-director back to Oldcastle to continue honing her artistic evolution.

Newcomer Mozo wowed the opening night audience, channeling the fusion of her natural beauty and austere 19th-century styling to project terror, madness and a sultriness that easily could serve well in a portrayal of fetish.

But past the brief yet pulsating moments of steamy sensuality, Mozo struck fear into our hearts, made the goosebumps on our necks rise when her glance caught ours in the shadows, and pushed us to question her sanity at times with the raising of an eyebrow, an upturn of her lips, and a facial contortion that gripped our imagination without letting go. How dark can an actor possibly take a character? Deep into the abyss, it turns out, as Mozo shows us.

On the other hand, when considering Wadsworth, we are faced with a phenomenon common to audience members who are lucky enough to see such a versatile Thespian at his pinnacle of repeated excellence: you run the danger of taking it for granted because by now, we all know Wadsworth is blessed with this uncanny talent for playing more characters than our fingers can count.

And so we must keep in mind that performances as peerless as Wadsworth’s, yes, do have to do with talent, but mostly are rooted in years of graft, sweat, frustration, repetition ad nauseam, and then some more graft – all in a labor of love which is bundled up and then unleashed on stage, one production at a time — bravo, sir!

The Oldcastle crew again picked up the gauntlet laid down by the actors and were proven worthy to the challenge. Ken Mooney’s adept modular costuming, as well as his multifunctional and surreal set design greatly enhanced the quality of audience experience.

Lights by David V. Groupe and sound by Cory Wheat excelled throughout, with a nice touch by the cemetery rendering. Kristine Schlachter’s stage management was as tight as a drum.

Of note and special mention was the work of dialect coach Tuffet Schmelzle. Readers over the years have known of my resignation for American actors botching English accents, and my endless desire to just scrap them and show us through acting how English the character is, rather than telling us with an icing of Cockney on Brooklyn cake.

But this is one of those times when the investment in a dialect guru did wonders for the accents used by Mozo and Wadsworth. Excellent move all around.

I purposely did not brush off my volume of Henry James to re-read the original novella. I did this to see how well the acting could carry me without refreshing the story details. It certainly is helpful to be aware of the basic plot of such a classic re-imagining, but not necessary.

To this end then, Oldcastle’s “The Turn of the Screw” stood on its own, and as a result — with just a handful of shows left — go see for yourself the high quality of theater this stage company is bringing to Southern Vermont on a consistent basis.

“The Turn of the Screw” by Jeffrey Hatcher, based on the story by Henry James and directed by Jillian Armenante, will run though Sep. 12 at the Bennington Performing Arts Center (BPAC) – The Home of Oldcastle Theatre Company, 331 Main St., Bennington. Indoor pod seating with masks required. Tickets: call the box office at 802-447-05654 or visit oldcastletheatre.org/tickets