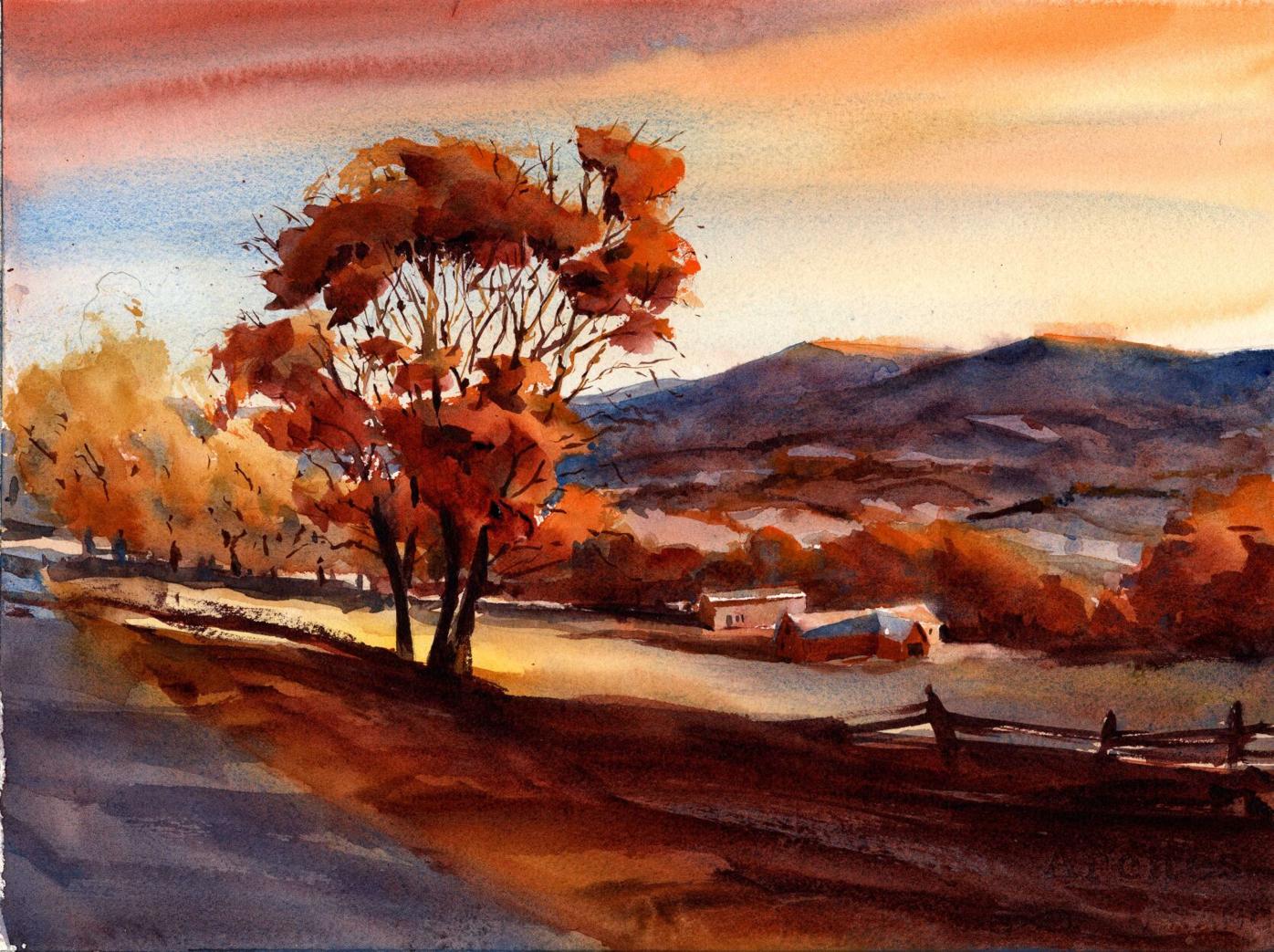 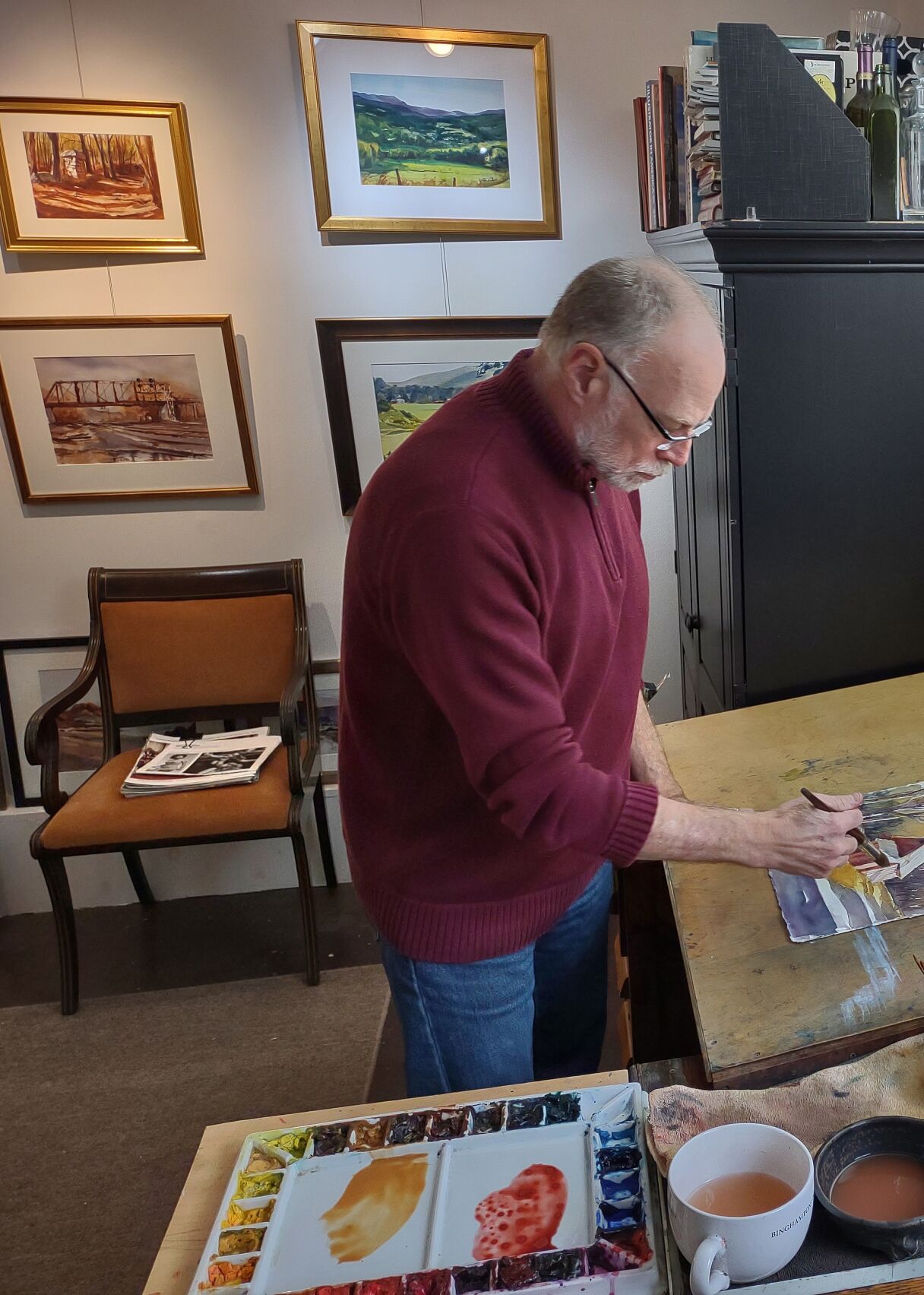 Painting as a hobby since elementary school, Conner missed out on formal art education in college, choosing instead to pursue business in school and his ongoing work life. So he ventured forth to learn on his own, beginning an enduring process of self-study.

While a corporate sales and marketing executive, Conner began to carve out time from his day to set about the task of becoming a full-time artist. This included self-study and work, as well as formal education and training when it fit his schedule.

“I couldn’t just drop everything in the midst of a growing family,” Conner said.

So Conner dedicated some time before work and at the end of each day to study and paint. In 1989 the Conner family settled in Bennington while Tony commuted to Albany, N.Y. daily to work for AT & T.

This continued until the 9/11 attacks, after which Conner was laid off from his job and seized the chance he was waiting for: an early retirement from corporate life, and a turn to painting his beloved watercolors full time.

“Even though I had been preparing for the moment when I could pursue my art dream for more than 20 years, it was a terrifying prospect.”

The watercolorist’s visionIn the ensuing two decades, Conner’s ongoing hard work, endless training in architectural drafting and continued education in painting led to the evolution of his own art.

“That training not only helped me find commercial success in a different medium, but also breathed new life into my representational expression; it enhanced the vision and technique of my watercolors,” he said.

Conner’s newfound appreciation meshed with his artistic role models, as well as associates and colleagues. He counts among his most influential teachers and mentors the artists Frank Webb, and the architectural draftsman and artist Frank Costantino.

“I learned to believe in the power of active marketing and promotion,” he said. “It was [important] to create opportunities for sales and commissions.”

Art historian Robert Wolterstorff, director of the Bruce Museum in Greenwich, Conn., said Conner’s vision is what sets him apart from those who are drawn to his paintings.

“A really good landscape painter has learned to see the world differently from the rest of us,” Wolterstorff said. “Tony sees the blue in shadows and the purple in clouds where we see only gray. But as a result we go out and see the world in a new way, enjoy it more, and understand our place in it differently. It changes us and enriches our lives.”

The motivation to strive for constant improvement while touching hearts seems to have served Conner well. In 2015, he attained one of the highest honors for a working artist: membership in New York’s venerable Salmagundi Club. Founded in 1871, it’s a landmark institution for artists: its membership once included greats such as N.C Wyeth and Louis Comfort Tiffany.

Art in the age of COVIDIn 2020, the pandemic caused cancellation of Conner’s many in-person classes and workshops — another important source of his income.

“I switched to online classes right away, in March 2020,” Conner said. “I spent the initial lockdown converting two- and three-day workshops into four or six-week online classes. I was very surprised to discover that most folks seem to learn better in online classes.”

His new teaching approach, Conner said, is to assign pre-class work, which the students return several days before the next online class so that he can do a recorded critique in Photoshop. Conner called these methods “far more effective for learning and building skill than in-person workshops.”

For his own art, Conner delved into more studio paintings and is now working in three mediums besides watercolor — gouache, acrylic and casein. He took two online classes himself — one in figure drawing and another intensive color class.

“The figure class has gotten me interested learning to draw and paint the head and face,” Conner said. “More specifically, Americans have experienced the serial traumas of our recent politics and the resulting cultural divide, along with the almost two years worth of pandemic anxiety. I’m interested in being able to capture the human effect of the collective trauma.”

In that same vein, Conner called the color class “eye opening.” He considered himself to be “really good at color — until the class” showed him how much was missing in subtlety, nuance and, ultimately, expression.

“This work has already changed the way I make color choices for a painting,” Conner said. “The painting ‘Fading Glory’ is a good example of this new approach, especially in the way richer, warm color is infused into the darker areas of the painting, especially the foreground.”

And while he continues his plein air work, it’s clear he is evolving yet again as an artist, one fueled by new endeavors the pandemic forced on him.

“These other inspirations and directions have both drawn time away from plein air, but also created new perspective and re-informed my approach,” he said.

For more on the art of Tony Conner, and to view his online store, visit tonyconner.com