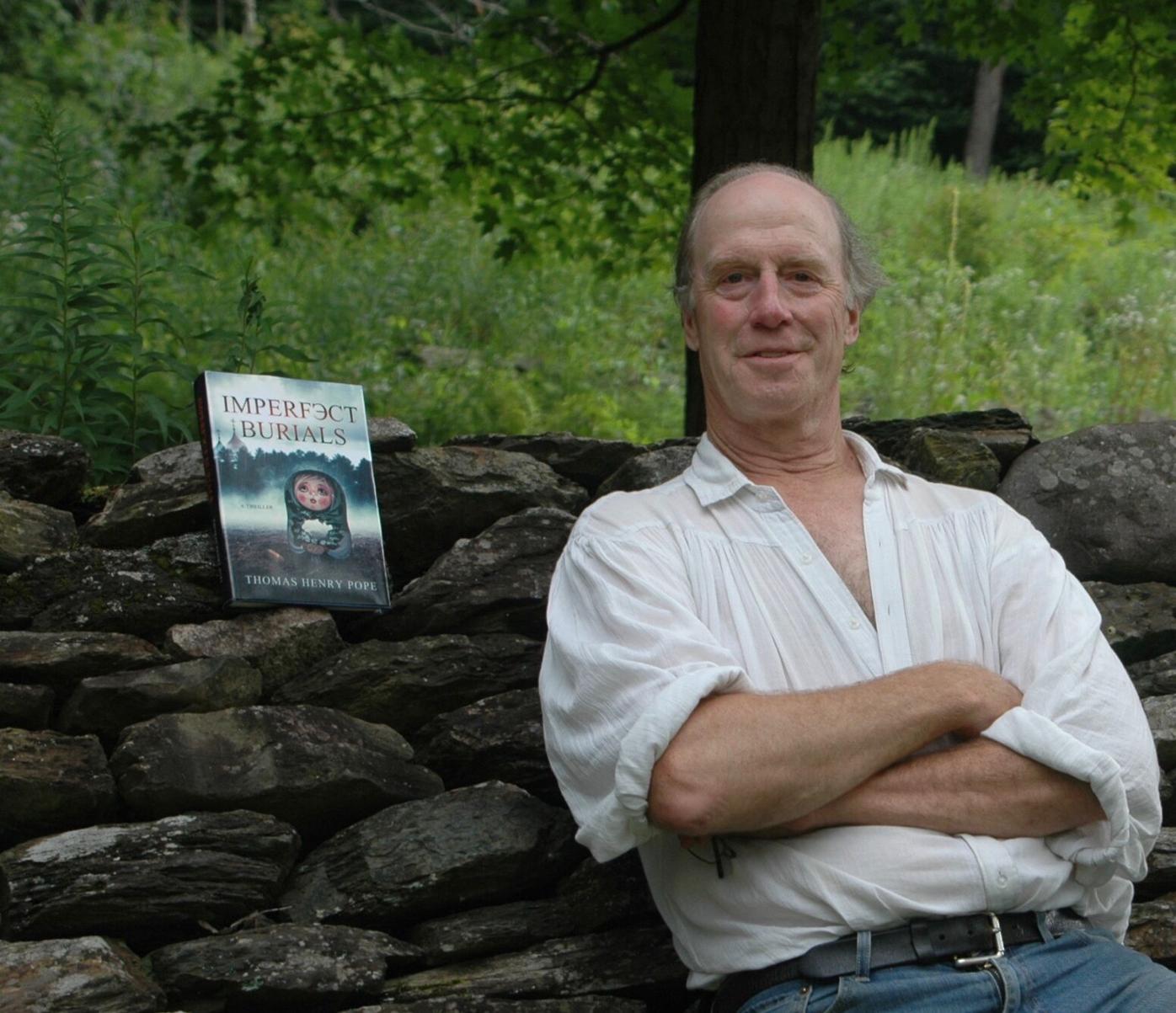 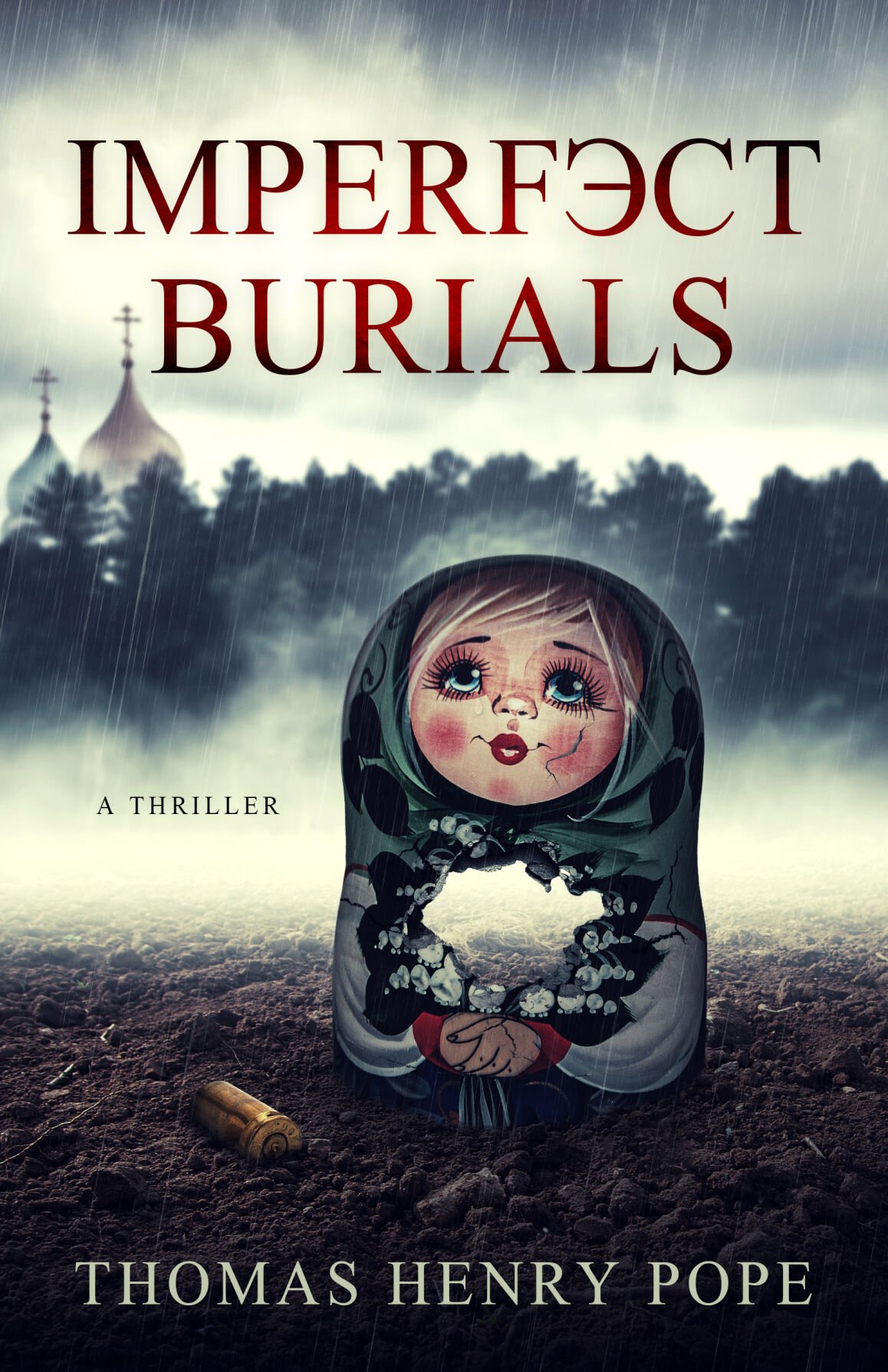 RUPERT — For Vermont author Thomas Henry Pope, living in Europe as a teenager in the late 1980s was a deeply influential period in his life. This is particularly revealed in his new novel, “Imperfect Burials,” (Shires Press, 2021, $28 hardcover, $18 trade softcover, available in bookstores and on Amazon) a thriller set on the continent in 1989 — the dying breath of the Cold War.

I can empathize with Pope’s assessment of that time in his life and how it affects him to this day. I lived in several different countries in Europe for a total of 16 years — some as an adult, but most of them as part of my boyhood when my parents decided to leave Brooklyn behind and go back to the family roots.

And so it is that Pope brings us journalist Finn Waters, a American correspondent in Eastern Europe who risks his life in pursuit of a story he dreams will exalt him to the level of his famous journalist father, who disappeared covering the Hungarian Revolution.

But Finn, as intriguing a heroic archetype as you’ll find in the classic thrillers of John le Carre and others of his ilk, is also devastatingly human:

“Regret often swept over [Finn] when coverage in a place wound down. He knew that in a decade’s time, new leader would have converted the fresh start into riches, and power from themselves. He, or some other journalist on the rise, would return to this place to file stories of the countries pain. Political scientists would connect the dots. But the people who were being fleeced would ignore [his] reports until it was too late.”

So in pursuit of an ideal, Finn doesn’t suspect he’ll have to make a devil’s bargain. But that’s how a good story turns, right?

With only three days before secret police will notice his absence at the 1989 Round Table Talks in Warsaw, Finn slips undercover into Russia to prove, once and for all, who massacred 22,000 polish officers and members of Poland’s professional class in the Katyn Forest bloodletting during Word War II.

“[Finn] took a taxi to the American embassy, where in a short meeting with the first secretary, he prepared the Katyn film and his pages to go direct to New York under diplomatic pouch. It was to be delivered unopened to Sam Rich at the New York Times. Because the embassy phones were also bugged, he would wait until he got to Vienna to call Sam about the change in his itinerary.”

Finn knows the truth will cause a global uproar capable of shattering the unsteady Soviet Union. And he prays the acclaim will smooth over the problems in his marriage.

To be clear: as a journalist myself, I’ve always rolled my eyes at stories about heroic reporters saving the world when so much of the job is mundane, persistent, low-level graft, and meeting deadlines to keep your editor happy. But in Finn Waters, Pope has created a character — indeed, complete with a cadre of others surrounding him — in whom readers can find not just admirable traits, but also relate to in terms of his human flaws.

This empathy is key for a very obvious reason: historically, we all know what happened: The Iron Curtain collapsed, and the Soviet Union broke up into many pieces with its principal driver, Russia, still a menace of sorts on the world stage to this day.

So while navigating sweeping events, Pope keeps us engaged — at time enthralled — with his mellifluous flow of language and an efficient style of descriptive narrative that is both thoughtful and some kind of hybrid between the efficiency of Hemingway, the gravitas of Steinbeck, and the historical research of Michener.

Well, agreed that those three aforementioned writers are giants, but there’s no question that an experienced writer like Pope has the goods, and then some.

I’m certainly not going to offer up a spoiler alert or anything like that. This particular novelist knows how to keep his readers fully engaged, while mercifully avoiding the cliches and tired rhetoric found in most so-called cliff-hangers.

Even someone like me, who is not attracted to fictional stories of my own profession, really liked “Imperfect Burials.” As entertainment, while giving a nod for its underlying serious message and history lessons, it’s a winner.

This is a lively read, one you would do well to tuck under your arm, while enjoying the ride Pope offers.

Telly Halkias is a national