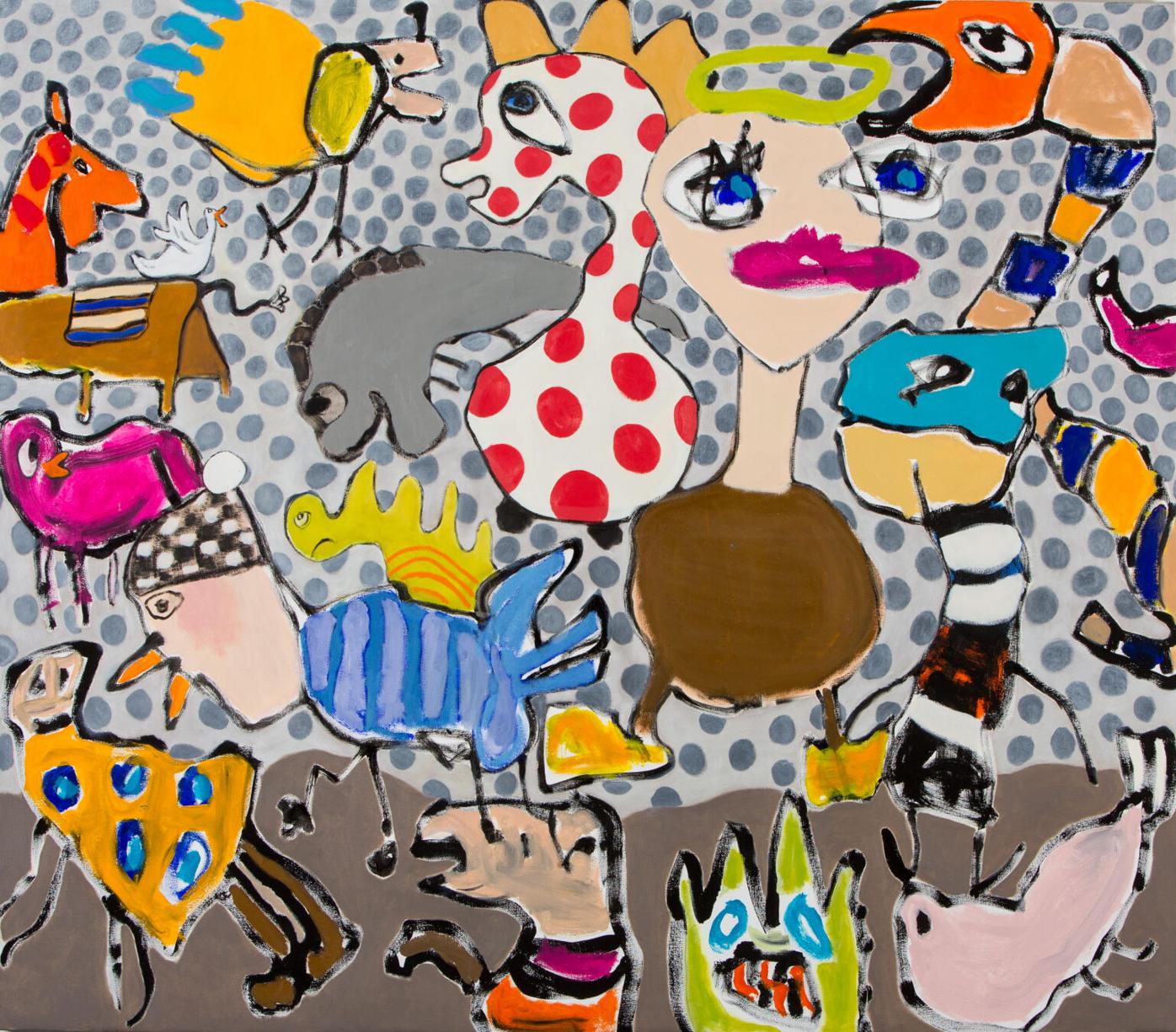 "Too Much Fun," 2017, by Dusty Boynton, mixed media on cotton canvas, 68 x 78 inches, now on exhibit in "Boundless: Dusty Boynton," at the Bennington Museum through New Year's Eve. 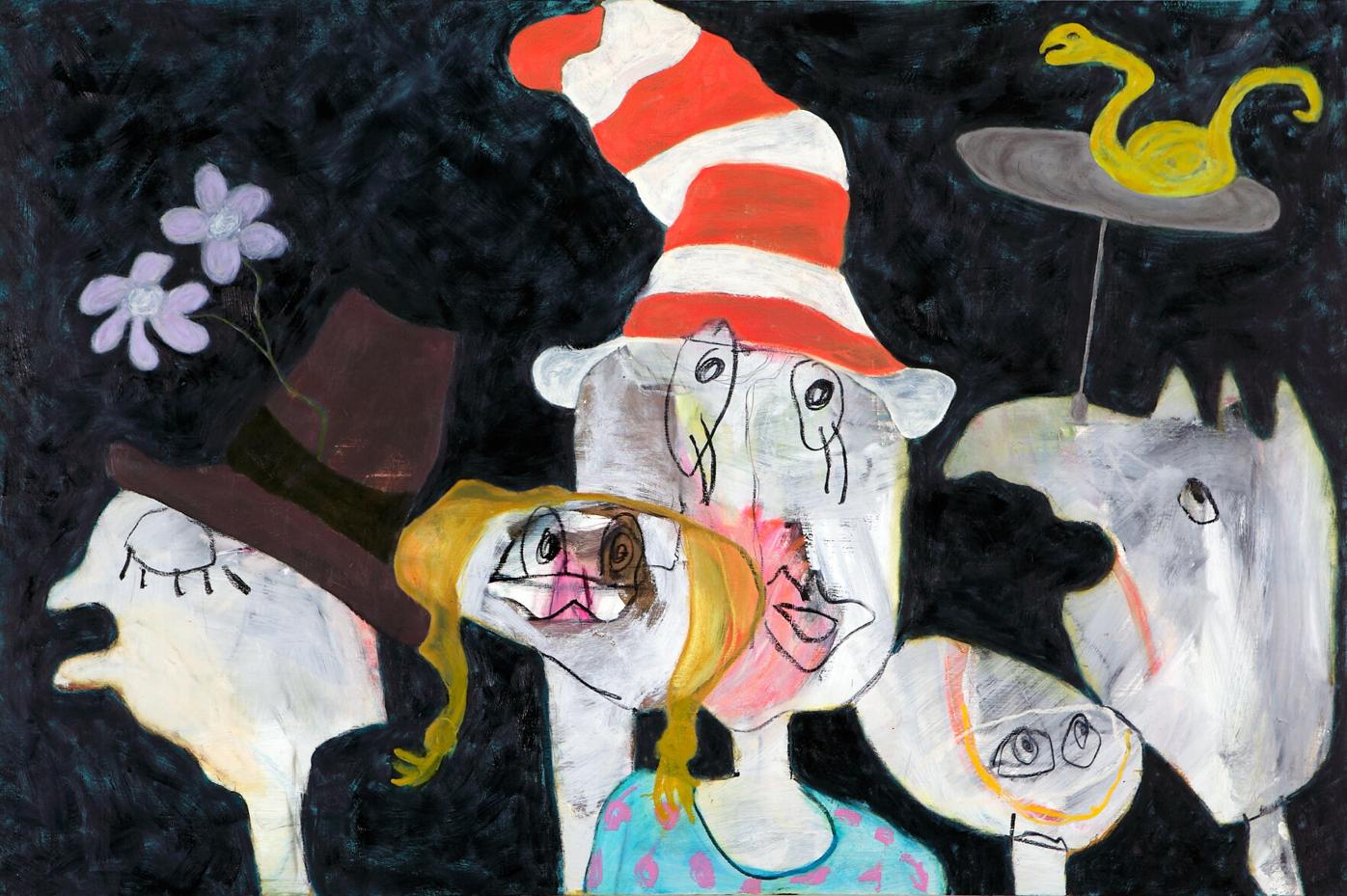 "Too Much Fun," 2017, by Dusty Boynton, mixed media on cotton canvas, 68 x 78 inches, now on exhibit in "Boundless: Dusty Boynton," at the Bennington Museum through New Year's Eve.

BENNINGTON — The great artist Pablo Picasso once memorably noted: “Every child is an artist. The problem is how to remain an artist once he grows up.”

These words of Picasso’s seem to reverberate in the long and narrow gallery hallways of the Bennington Museum, which recently opened “Boundless: Dusty Boynton,” running through New Year’s Eve.

This echo to youth, according to Bennington Museum curator of collections Jamie Franklin, is rooted in the artist’s own personal history: Boynton, who turns 86 this December and lives and works in Hyde Park, began painting when she was 52.

“You can say Dusty started at her art late in life, but her creative evolution was already in motion,” Franklin said. “Before she began the decades of painting which yielded the works in this show, she was involved in creating high quality, intricately detailed, three-dimensional doll houses.”

This sense of order continues to inform Boynton’s current work, even if the free flow of ideas and imagines in her paintings might suggest otherwise.

Boynton’s recent paintings and monoprints — many of the works in “Boundless” were created during the pandemic lockdown — draw viewers into lively and passionate worlds, introducing them to a powerfully unconventional group of characters.

The themes and personalities in her paintings seem to choose delight rather than melancholy, and her figures love to mix it up with viewers in funny and surprising ways. The spare lines that define her awkward and joyful human representations lend a moving vulnerability to the proceedings.

“I leave my head at the [studio] door,” Boynton, who typically avoids speaking to reporters, is known to be fond of reminding everyone.

To demonstrate this much, Franklin goes directly to the end wall of the gallery, where there is an oversized 2017 painting of oil on cotton canvas, “Too Much Fun,” which serves as a magnet to those walking along the gauntlet of Boynton’s work.

“For me, this painting brings together what Dusty’s work is in its essence,” Franklin said. “Look at some of these creatures and you really can’t tell what they are. These creatures, is this a bird or something else? What is that blue tail doing there? The wing looks like it might be another creature. The face — it’s wearing a winter hat. It looks like it might have a beak and four legs, four insect legs. The gray polka-dotted pattern in the background?”

Franklin continued with a smile on his face to say that there is “so much child-like joy” in the painting, that thinking about its title, “Too Much Fun” may be exactly the feeling one should have when trying to decipher it.

“Sure, as students and lovers of art, we can stand here and work on analyzing it, but we’re also having such great fun doing so,” Franklin said. “Consciously or subconsciously, Dusty is bringing out the better part of being human in the way we are reacting to what she’s created.”

This connection of Franklin’s echoes the notion brought out in every one of Boynton’s 14 oil paintings in the show, co-curated by Franklin and Sophie Bréchu-West of 571 Projects, that the works have the spontaneous immediacy and seeming naivete of children’s artwork.

Still, as Boynton herself pointed out, she has no preconceived notions when first sitting in front of a blank canvas, and just wants to let her creativity flow.

Franklin concluded by standing in front of one of his favorite paintings, the 2011 offering, “Town Meeting,” and once again with a broad grin indicated how Boynton’s gravitas and joy can come together in a topic close to the heart of every Vermonter.

“The images in this painting, topped off with the central figure and his Cat In the Hat hat, has us all nodding fondly at what our small town personalities are like,” Franklin said. “We see serious issues on the lips of our select board members while at the same time the court jesters we all know so well are taking up the meeting floor time with their tangents and eccentricities. As a Vermonter, how can you not love this?”

“Boundless: Dusty Boynton,” will be on display through New Year’s Eve at The Bennington Museum, 75 Main St., Bennington. More information is available by calling 802-447-1571 or online at benningtonmuseum.org.