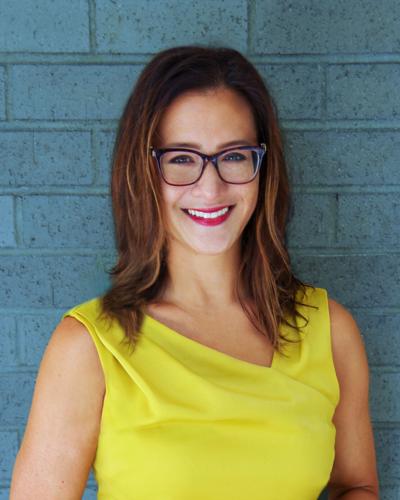 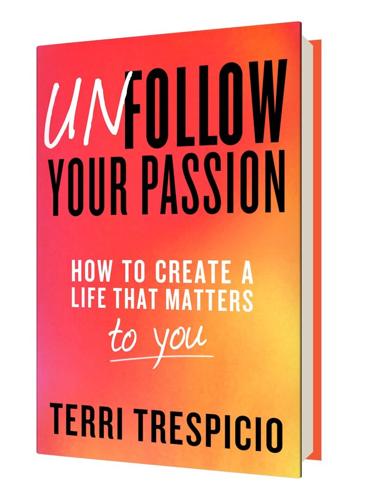 KEENE, N.H. — When Terri Trespicio was in her 20s, unsure what she wanted to do with her life and paralyzed by the fear she would make the wrong choice, her mother, Jeanne, gave her some advice.

“She was like, ‘You don’t figure out your life and then live it. You figure it out by living it.’ That was very prophetic of her,” said Trespicio, 48, now a nationally in-demand speaker, award-winning writer, brand adviser, stand-up comic, TODAY Show guest and, most recently, author.

Trespicio, of New York City, is coming to Nova Arts Block, 48 Emerald St., Keene, at 7 p.m. Jan. 29, to promote her book, “Unfollow Your Passion: How to Create a Life that Matters to You” in an event that combines a book launch with a writing workshop based around ideas in the book. Attendees will receive a signed, hardcover copy of the book.

“I wanted to make sure that this was an event that people would get something of their own from,” Trespicio said of the idea to combine a launch with an interactive workshop. “I wanted people to feel transformed in their own way. And that doesn’t come from just listening to me.”

Tickets are $30, and available online at novaarts.org/events/unfollowyourpassion. Masks will be required for entrance and moving around the space.

“You come away from her work feeling like you jumped in a spring lake, alive, excited for your own work and seeing everything anew,” Karush said.

Karush noted that Trespicio’s workshop is informed by Gateless Writing, founded by Suzanne Kingsbury, formerly of Brattleboro, Vt. Gateless Writing is “a methodology that uses creative brain science, ancient Zen, and highly-effective craft tools + resources to move you beyond the conditioned, critical mind to a place of limitless creative potential beyond,” according to Kingsbury’s website.

Trespicio recently caught up with Vermont News & Media via Zoom to talk about her book’s unconventional title and wisdom, why introverts make good speakers and what her mother thinks of where she is now.

Q: How did you come up with the phrase, “unfollow your passion?” It sounds almost negative.

A: It’s meant to make you look twice. It was inspired by a TED Talk I gave in 2015 called “Stop searching for your passion.” We almost called the book that, because that TED Talk has almost seven and a half million views. And we’re like, “Hey, guess what? People know the talk, we should stick close to that.” But I didn’t want to call it the same thing. And I couldn’t think of a name. I was too close to it. So a friend of mine, who’s a creative director, she came up with the name and she said, I know what it is: It’s “unfollow” — she’s big into social media. So I feel like I can give credit to my friend Kim for coming up with the name.

I’ll tell you the reason why I wanted to go with that, was, number one, it’s counterintuitive. It’s like, what do you mean? Here’s what it means: The reason I named it that was because I wanted people to question the conventional wisdom that you should follow your passion. Not because you shouldn’t follow it, but because the idea that you have one — and you’re supposed to know what it is — paralyzes a lot of people. And they think, “oh, I’m supposed to know what I’m supposed to do with my life and my career, and I don’t know.” No one knows. I wanted to relieve people of this idea that they’re supposed to go on a wild goose chase their whole life because I got off that train a while ago. It was hard enough to pick a major in college. Now I have to pick a major for life? So, the goal of it is not for people to not be passionate — opposite. It’s for people to realize they can experience passion in lots of different ways and that you’re not doing your life wrong, that you didn’t make a wrong choice.

Q: Can you talk about how this perspective played out in your own life?

A: I’ve always loved writing, but that didn’t help me find a career. I left college and I was like, I don’t know. And I don’t want to work at a newspaper. I was not a reporter type. And, of course, this was also the nineties, so content producer was not a title that existed yet. I didn’t know what I wanted to do, and it didn’t matter that I liked to write. I was afraid of everything. I didn’t think anyone would want to hire me. And I didn’t know how, because I liked to write someone would hire me.

But later, let’s jump way ahead: When I got laid off in 2011, I knew that following my passion wouldn’t help there, either, because I didn’t need to follow my passion. I needed to pay my rent. I wanted to stay in Manhattan, which is a little pricey.

I (didn’t) want to get a job-job. I had already had a job-job. I wanted to work from home and just sort of have lots of different clients. That sounded fun to me. So that’s how I did it. Not by following my passion, but by trying different things that I liked to do, just trying. And if someone was really excited about something like, “oh my God, can you do that? We will, we will pay you for that.” Then I got excited about that thing. It wasn’t my barometer for excitement that made the job exciting. It was when someone goes, “oh my God, this is so helpful. Could you write my website, content?” I said, “guess what? I’m in business as a website copywriter.” I’d do whatever was fun.

That’s how I learned to make a living as a business owner, but it wasn’t because I picked one thing.

Q: Do you consider yourself an introvert or an extrovert?

A: Complete introvert. I love public speaking. It’s a big part of my life. I love doing that stuff, but I’m an introvert, meaning, if given the chance, I like my own company versus company with anyone else. I live alone. I love living alone. I need long periods of being alone, and then I can bring all my energy to the table or to a talk or whatever. And I love it. But then like most introverts I need to run away. Whereas an extrovert feeds off that energy. I spend my energy on that because I love spending it in this way.

So I get to do both. I don’t think it’s one or the other, I think introverts make for great speakers because the introverts are great at one-on-one conversation and a speaker who you feel is talking to you is very powerful. So I tend to question the notion, right? That extroverts are the life of the party and introverts are not.

Q: You carry yourself very well. Can you talk about how you developed your confidence?

A: It took a long time. Like when I was in my 20s or in my 30s, maybe I was starting to get more confident, but I think a lot of that also comes with age, you know?

Here’s what also gives someone confidence, I think: Practice at something that, you know, you’re good at talking about. Like I found, for instance, I was in a conversation recently with someone who was dropping a lot of names of artists and restaurants. I didn’t know any of them. And I immediately was like, I can’t contribute to this conversation. Then, the conversation shifted and I got to ask him questions about himself, and then I was at my best. I know I can’t talk about everything, but the confidence comes with having the courage to ask other people questions. So the more I got to let people feel listened to, they trusted me more. When people trust you, you start to realize, oh, people trust me: this is worth something. So the idea of confidence was acknowledging that I’m not great at everything.

In my little world of what I really like talking about, I can do that. I’m a strong communicator, but it’s been years of practice of leaning into what I’m good at, not trying to be better at what I’m bad at. This is what the research shows, too, is that, if you lean into what you’re good at, you’re gonna get better and you’re gonna feel good in that area.

Q: In your TED Talk, you credited your mother with helping you get out of your own way. What does she think of where her advice has taken you?

A: She called me sobbing. She did what I did in my 20s. I would call her crying because I had no life and nothing. And she called me after she read the early galley of the book and just sobbed. And I just sat there and she’s like, “it’s just so good.” I was like, “I know, but you’re my mom. Of course you love it.” She’s like, “no, it’s really good.”

I wrote about her brother, her only sibling, my uncle Bob, who had a huge impact. And it was particularly emotional for her.

His prostate cancer came back, so he died pretty young and it was devastating for everyone because we were all close to him. He died when I was 30, so it’s coming up on like 20 years now that he’s been gone, and it’s exciting because any friends I’ve made since then don’t know him, but now, because of the book, they do know him.

He was one of the first, definitely before anyone else, when I was 24, 25, he was someone who said to me, when we were on one of our trips, he said, “You don’t have to do what everyone’s doing.” All my friends were getting engaged and moving in and buying appliances and thinking about very serious long-term commitments. And I was like, “I am nowhere near ready for that.” And he said, “You don’t ever have to do that.”

Q: How have you coped with perfectionism?

A: I was a straight-A student. If I didn’t do well in something, I was hung up on it. I was so perfectionist and so blocked in, it might have been sixth grade that we were given a term paper, like our first research paper. I was overwhelmed: go to the library, get the card catalog. I had no effing idea what I was doing. And I picked a topic that was too big. No one was really helping and I was overwhelmed and then couldn’t do anything. Couldn’t write a thing.

The principal had to call me down to the office, and, usually you go in there when you don’t do your homework, but she was like: Listen, you do the paper when you can do it. If you hand it in next summer, that’s fine.

It was affecting kind of everything, and that’s when I learned how dangerous it could be to be blocked as a writer. I still run up against that, but now I know how to write my way out of it, which I didn’t have the skills for then, but I have them now. And that’s why I love teaching workshops because the thing that people say when they leave them is, “Oh, thank God. I feel like I can. I feel like I can breathe. I feel like I can write.” Even the people who don’t identify as writers feel like they can write. And so that’s, to me, that’s so worth it.