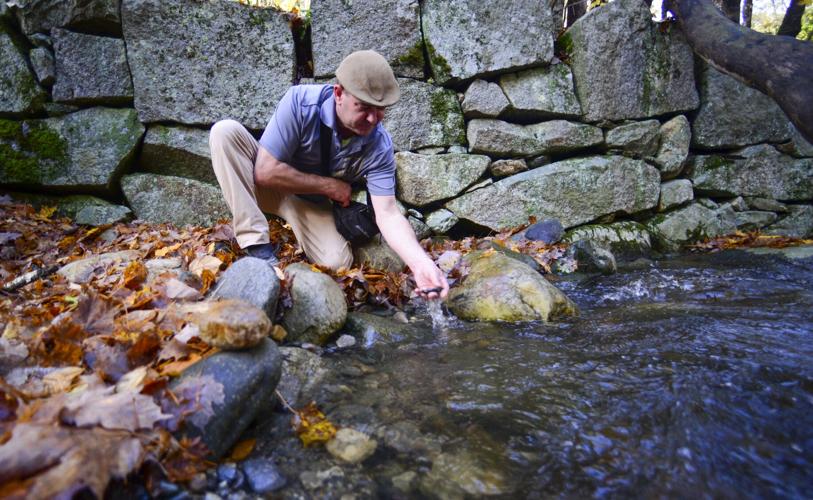 Tom Hathaway collects rocks to be cut into pieces for his Gravitas game at Stickney Brook in Dummerston in late October. 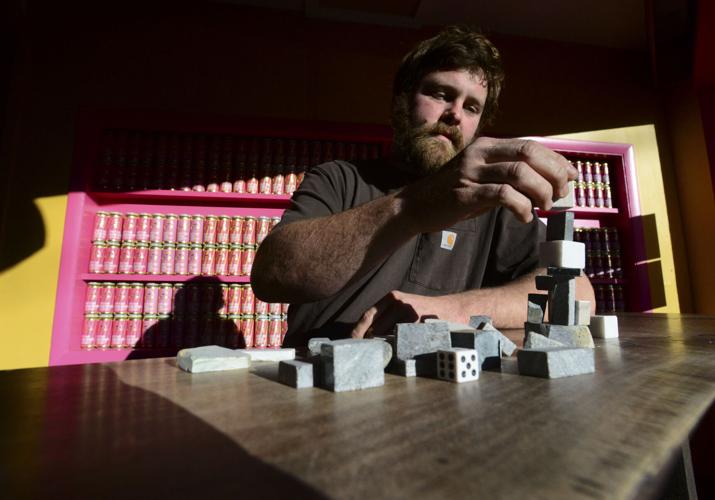 Reigning Gravitas champion Riley Luthier of Townshend will defend his title at the game's annual tournament Sunday at the Dummerston Community Center. 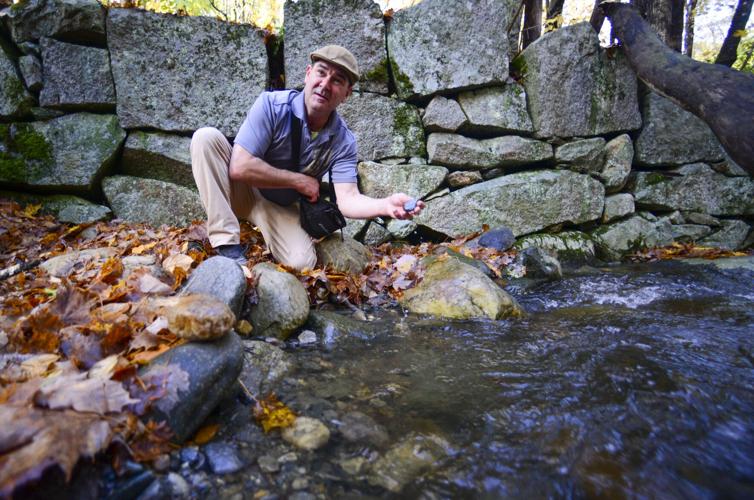 Tom Hathaway collects potential Gravitas pieces at Stickney Brook in Dummerston. He estimates he has created about 2,400 editions of the game since inventing it about four years ago. 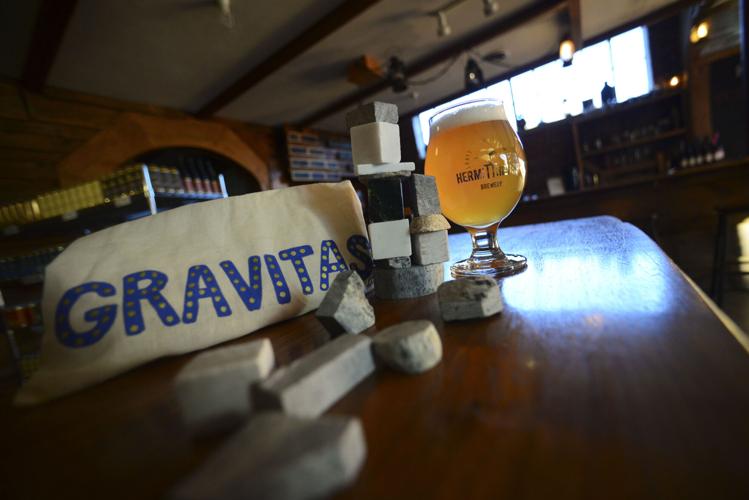 Gravitas is available to play at the Hermit Thrush Brewery taproom in Brattleboro, and available to purchase through the brewery's website.

Tom Hathaway collects rocks to be cut into pieces for his Gravitas game at Stickney Brook in Dummerston in late October.

Reigning Gravitas champion Riley Luthier of Townshend will defend his title at the game's annual tournament Sunday at the Dummerston Community Center.

Tom Hathaway collects potential Gravitas pieces at Stickney Brook in Dummerston. He estimates he has created about 2,400 editions of the game since inventing it about four years ago.

Gravitas is available to play at the Hermit Thrush Brewery taproom in Brattleboro, and available to purchase through the brewery's website.

DUMMERSTON — The word “gravitas” conveys the ancient Roman virtue of seriousness, something of weight, dignity and importance. It also conjures a sense of responsibility and commitment to a task.

So there’s some irony (another good mineral-based word) that a locally created stone-stacking game called Gravitas can be so much fun, can bring people together and draw them away from everyday concerns and responsibilities.

“This isn’t a business, this is a community, a tribe,” says Hathaway, a Dummerston resident who goes by the nickname “Tom Thumb.”

“I love the Gravitas camaraderie. I just want people to be able to get together and play this game, and enjoy each other’s company and not be flipping through phones or email or instant messages or whatever,” Hathaway says. “It’s about people putting their phones down and getting back to the ‘Stone Ages’ or ‘B.C.’ — for me that stands for ‘before cellphones.’”

Hathaway, 49, collects all of the rocks used in Gravitas from area waterways, such as Stickney Brook, or the Rock or West rivers. He cuts them into the shapes used in the game — circles, shafts, triangles, squares, pentagons, etc. Players receive the same number of shapes, then take turns rolling a die and stacking the stones corresponding to the shape that matches the number rolled. If the stack falls or a piece falls off, the player must take back all the stones that fall. The winner is the person with no stones left.

The game is kind of a blend of Jenga and those ubiquitous cairns seen all over New England — manmade stacks of stones sometimes used as trail markers or memorials. Part of the appeal of Gravitas is that it can bring the outdoor world inside in a fun way. And each edition of the game has its unique set of pieces hand cut by Hathaway — like a “snowflake,” as longtime Gravitas supporter Pete Ginter says.

It all comes naturally to Hathaway, a Massachusetts native who formerly worked for years cutting and engraving memorials for his family’s gravestone business. But don’t call him a rock “expert,” not yet anyway. “I’m getting there. I know what cuts good, what people like. I know how to cut them properly,” he says.

While Hathaway doesn’t call Gravitas a business, it has certainly blossomed into more than a hobby. He estimates there are nearly 2,400 editions of the game out there, either in private hands or public spaces. Hathaway and his longtime partner, Kristin Atkins, market and sell the game online through a Facebook page, or simply by word of mouth. It is also available for purchase at area farm stores, such as Dutton’s Farm Stands in Brattleboro, Newfane and Manchester Center.

A lot of the “word of mouth” comes from Hathaway himself, an energetic, personable fellow who easily strikes up conversations with strangers, either at (often Grateful Dead-related) concerts, public events or out in “the wild.”

“I want to be a beacon for people to get together,” he said. “I’ve been lucky that way, and I want to share that.”

The game sells for about $100 a pop, sometimes more for special editions — the “red carpet treatment,” Hathaway calls it — such as ones in which Hathaway cuts all the pieces from a single stone that somebody has found or has a sentimental attachment to.

Hermit Thrush Brewery in Brattleboro is one of the game’s biggest supporters, ever since co-owner Chris Gagne fell in love with the game about four years ago. The brewery sells the game through its website and usually has an edition on hand for patrons to play in the taproom.

“It’s a good complement to what we do here,” said Joan Bulzacchelli, Hermit Thrush taproom and events manager. “It’s easy to learn, harder to play. It also fits with our story. We ferment all our beer using local Vermont yeast. All the rocks in Gravitas are locally sourced and handmade, so it ties in with that.”

The game has certainly caught on, especially in Southern Vermont. Its popularity soared during the COVID-19 pandemic, when people were quarantined and looking for something different to pass the time indoors. Gravitas is also played during the monthly “Game Night” at the Stone Church in Brattleboro. The game even has its own annual tournament, which this year will take place this Sunday at Dummerston Community Hall.

It’s all very gratifying to Hathaway, who enjoys kayaking, bicycling or just walking along local riverbanks, filling up his backpack with rocks and taking them home to cut them up for Gravitas pieces.

Hathaway said he cut on average about a thousand memorial stones per year when he worked for his family’s gravestone business, “helping people out in the last steps of their life.”

By contrast, he recalls a particular edition of Gravitas that he made for an elderly man who was suffering from a serious, life-threatening illness. The man’s family said the game “brought him back to a place where he was comfortable again and enjoying life,” according to Hathaway.

While Hathaway isn’t sure if the man survived, “I like to think that in his last days he was playing Gravitas. That’s better than writing his name on a stone, isn’t it?”

You can order an edition of Gravitas by calling 802-257-4360 or through the game’s Facebook page. It is also available to purchase through the Hermit Thrush Brewery website, and at Dutton Farm Stands in Brattleboro, Newfane and Manchester Center.