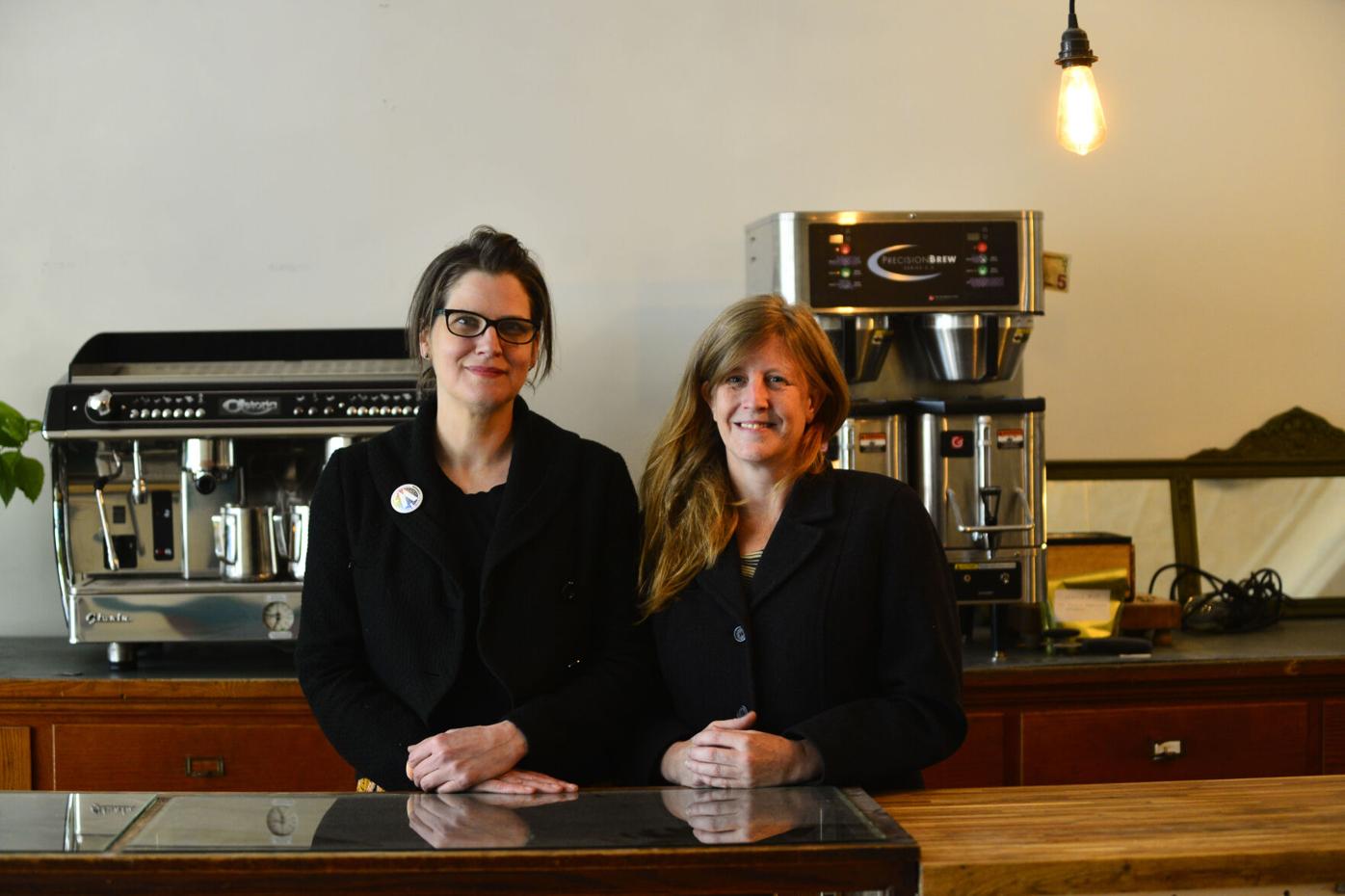 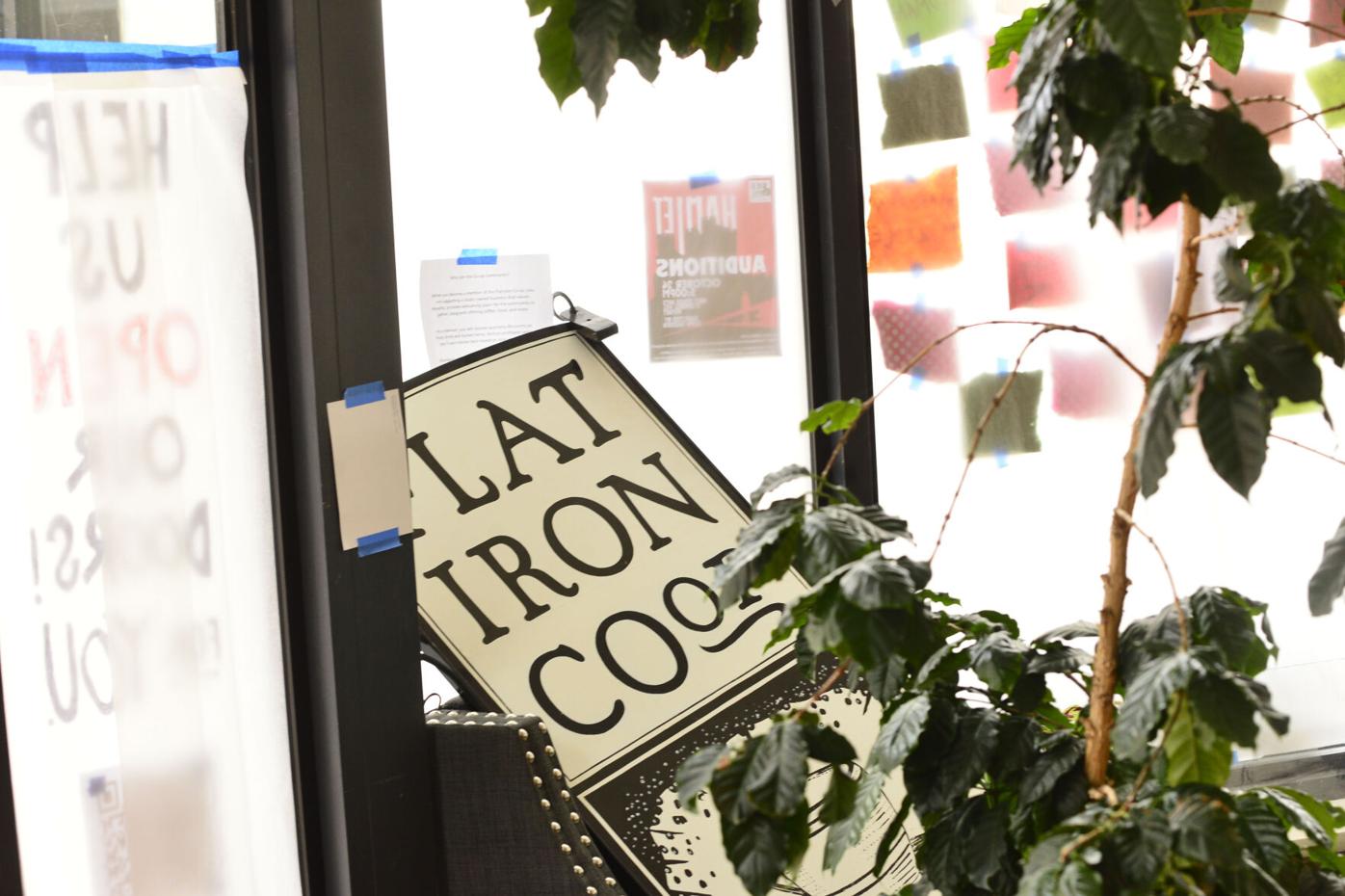 BELLOWS FALLS — The Flat Iron coffee shop hopes to reopen next month as a cooperative.

Three friends — Bri Johnson, Larisa Demos and Jana Bryan — are reopening the COVID-shuttered downtown coffee shop, and on Friday they were celebrating a successful Kickstarter campaign to raise $45,000 to pay for renovations and operating expenses.

In the meanwhile, Bryan, a landscape architect with Julie Moir Messervy Design Studio, sold the distinctive building to her college friend Johnson in late 2020, and since then Johnson, Demos and Bryan have been working on a plan to reopen the coffee shop, but this time as a cooperative.

“We’re all about cooperatives,” said Johnson. Demos said they had been buoyed by support from “friends, family and strangers ... and lots of support from other coops.”

On Thursday, the open front door let the warm air in, and there was a steady stream of people stopping by, lending words of support (and a check) and questions about when they were opening. An antique counter from North Adams, Mass., occupied one back wall, and the front counters were still under construction.

A contractor was working on installing a vent in the bathroom, and paper still covered the large windows. The floors had already been refinished.

There’s still lots more to do before they open, said Demos.

They say the coffee shop will fill a community need, not just for gourmet coffee and scones.

Previously, the coffee shop was called the Flat Iron Exchange, and Johnson said they debated whether to keep the name Flat Iron, but ultimately they decided to but change the word exchange for co-op.

Johnson, Demos and Bryan are renovating the space, bringing in new-to-them old wooden counters, built benches, bought furniture, and because the coffee shop is now considered a restaurant by state regulations, installing improvements in the bathroom.

One thing won’t change — the spirit of community, said Johnson, who is originally from Hyde Park in Northern Vermont.

There won’t be on-site cooking in the small space, which is shaped like a flat iron: narrow in the front and widening in the back.

Johnson said the 1861 building is actually older than the famous Flat Iron building in New York City. It started its life as a drugstore, she said. Johnson and her dog live on the third floor of the building, overlooking Westminster Street and The Square.

Johnson is an artist and librarian, and Demos has worked for businesses for the past 20 years, the last eight at employee-owned Green Mountain Spinnery in Putney.

Johnson and Demos, who also lives in Bellows Falls, said that neither of them are baristas, but will undoubtedly learn quickly. They bought the coffee and espresso machines from the town of Rockingham, which had been listed as collateral for a town loan by the previous owner Jones.

The new owners said they were not borrowing money from the town’s revolving loan fund and were instead relying on the Kickstarter effort, which was an all-or-nothing fundraising effort.

They said the Flat Iron would again offer space for artists to display their work and for musicians to perform, in addition to being a gathering space for the community.

Demos herself used to come to the knitting club, which met at the Flat Iron.

The women plan on offering “grab-and-go” meals, including sandwiches, salads, soups and bread, along with vegan items. The cafe will also offer beer and wine.

They will be selling produce and food produced by North Wind Farm’s Nate and Thalia Brown. The Browns make wonderful kimchi, they said. Their coffee will be coming from the Wilmington coffee roaster 1a Coffee. “They are wonderful,” Demos said.

One fan is Betsy Thurston, the executive director of the Downtown Bellows Falls Development Alliance.

Thurston said a second coffee shop on The Square was good for business. Rockingham Roasters opened this spring.

“This is good for the town,” said Thurston. “You have a lot of support,” she said, pointing to the Kickstarter campaign.

Demos, Johnson and Bryan started the project in January, via Zoom. “We met on Zoom and didn’t meet in person until March,” said Johnson, who knew Bryan from the Rhode Island School of Design.

Johnson said she “loved being a librarian,” and said she wanted to bring the spoken and written word to the coffee shop, with readings or performances.

“We all have the same vision,” she said.

“Music, literature, art and coffee,” she summed up.

“This will be a hub where you meet people, a place to exchange ideas, a true coffee house,” said Demos.

Johnson and Demos said they didn’t have a firm opening date yet, or schedule or hours. The two of them will be the first employees, they said, and they will hire people.

They would love to be open from 6 a.m. to 6 p.m., seven days a week, but they both said starting small made more sense.

“Hours will be based on our stamina,” Johnson laughed.