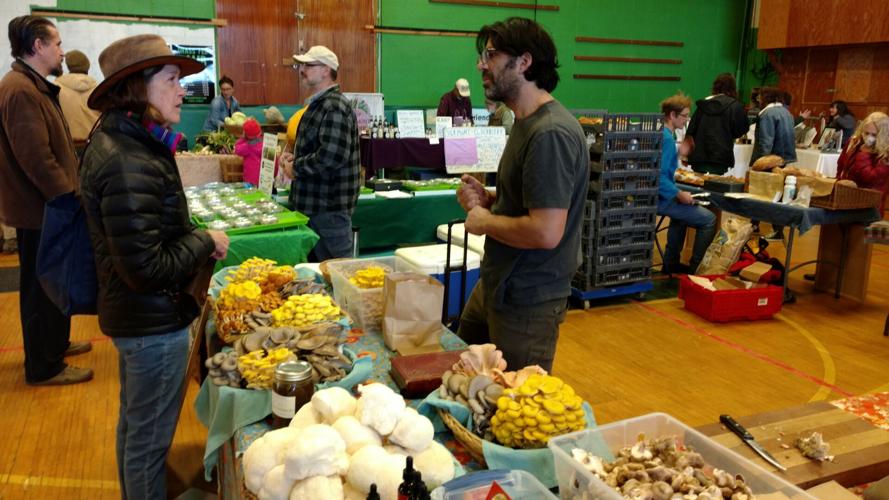 Carol Moore, of Hinsdale, N.H., talks with Jon Deloge, of Slipstream Farm in Newfane, about the different varieties of mushrooms he offers. 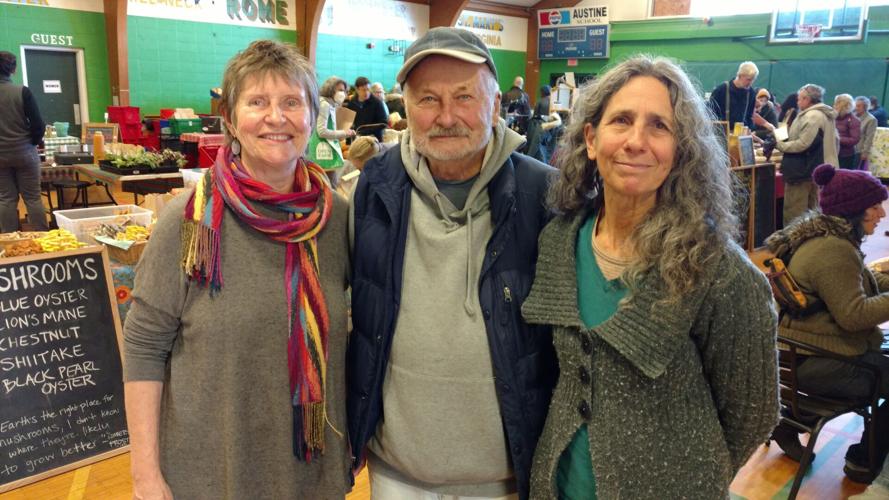 Carol Moore, of Hinsdale, N.H., talks with Jon Deloge, of Slipstream Farm in Newfane, about the different varieties of mushrooms he offers.

BRATTLEBORO — The Brattleboro Winter Farmers Market has outgrown its space twice in its 17 years, but in its new home — the gym of the former Austine School for the Deaf on the Winston Prouty Campus — the market has room to grow.

“It has been such a welcoming place for us,” said Sherry Maher, market manager.

“It’s a beautiful space,” said Jon Deloge, of Slipstream Farm in Newfane, which specializes in a wide array of mushrooms. “This is a dynamite location.”

Hannah and Cole North, of Finocchio Wood-Fired Kitchen in Marlboro, brought bagels, bread and focaccia to the farmers market.

“We’ve met so many amazing people at the market,” said Hannah North.

Nicole Crouch-Diaz, of Earthen Co. of Putney, which specializes in flower essences, said the new location is able to serve more people.

“And the crowd is open and interested,” she said.

The market was in the Robert H. Gibson River Garden for more than a decade, since its founding by Post Oil Solutions in 2006. For the past four years, before moving to Austine Drive, the market has been at 80 Flat St., where can now be found Experienced Goods.

The market ran out of space in both locations, said Maher. In the gym, there’s more space for vendors, music, food and people with kids.

“When Post Oil was kind of a new beginning grassroots group in Brattleboro, it was right at the same time that there was a lot of localvore food things happening around, not just in Vermont, but elsewhere around the country,” said Maher, who’s married to the founder of Post Oil Solutions, Tim Stevenson. “One of the folks who was involved with Post Oil, Cindy Hellman, kept on saying to us, ‘When the [summer] market closes down at the end of October, those folks have tons of produce left, and they have no place to sell it. We should do something.’”

The Winter Farmers Market is in its 17th season, having grown and evolved over those many years, but it was a hit right off the bat.

“We began with a plan to be open for Saturdays November through December,” said Maher. “Within, I would say, three years, we were opening for one day in January, February and March, and then two days in January, February and March and then people kept getting confused. So we kind of bit the bullet and went with every Saturday, November through March, and we’ve never looked back.”

She was a little hesitant at first to move out of the River Garden and off of Main Street but, “It was just too tight,” she said.

“It is a beautiful space,” said Maher. “But we had outgrown it. We were losing customers like parents with little kids who would never bring them into the market because there was no room and, you know, they turn around and they knock something over. I mean, it was really too tight.”

Parking was also a problem on Main Street.

“We were pretty confident that being on Main Street wasn’t as important as having adequate and convenient parking,” she said about the market’s move to Flat Street.

She said sales “took off” when the market moved to the Church Building and have gotten even better now that it is on the Winston Prouty Campus.

“We were a little concerned as to whether or not folks would follow us. But they certainly have. And many new folks have found us. And we’re pretty excited about it.”

The location is also a great spot to get some hot food and listen to music.

“It’s in the acoustic, folk-type of genre,” said Maher.

The farmers market accepts a $10 credit from the Supplemental Nutrition Assistance Program. The market also offers an additional $20 match from the Vermont Food Bank, so folks on SNAP can use a $10 credit and get $40 worth of food, said Maher.

Zach Hebert, manager of community engagement of the Vermont Food Bank in Southern Vermont, said the grant is part of the organization’s Food Boost Program.

“It accomplishes all of the goals Vermont Food Bank is shooting for,” he said. “It not only benefits Vermont farmers, it also puts money directly in the hands of folks who need the funding. The more you can get money directly to people, the better.”