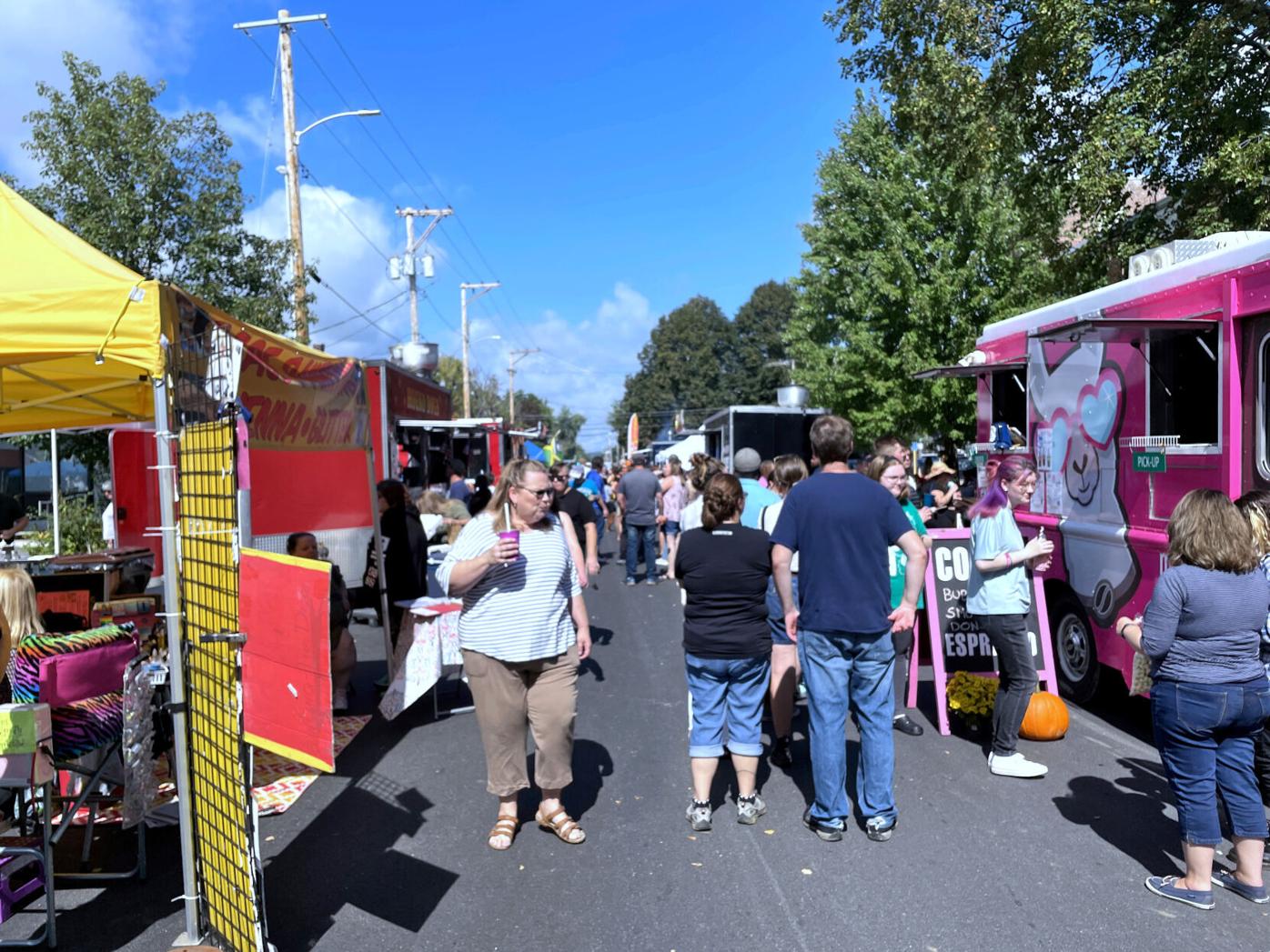 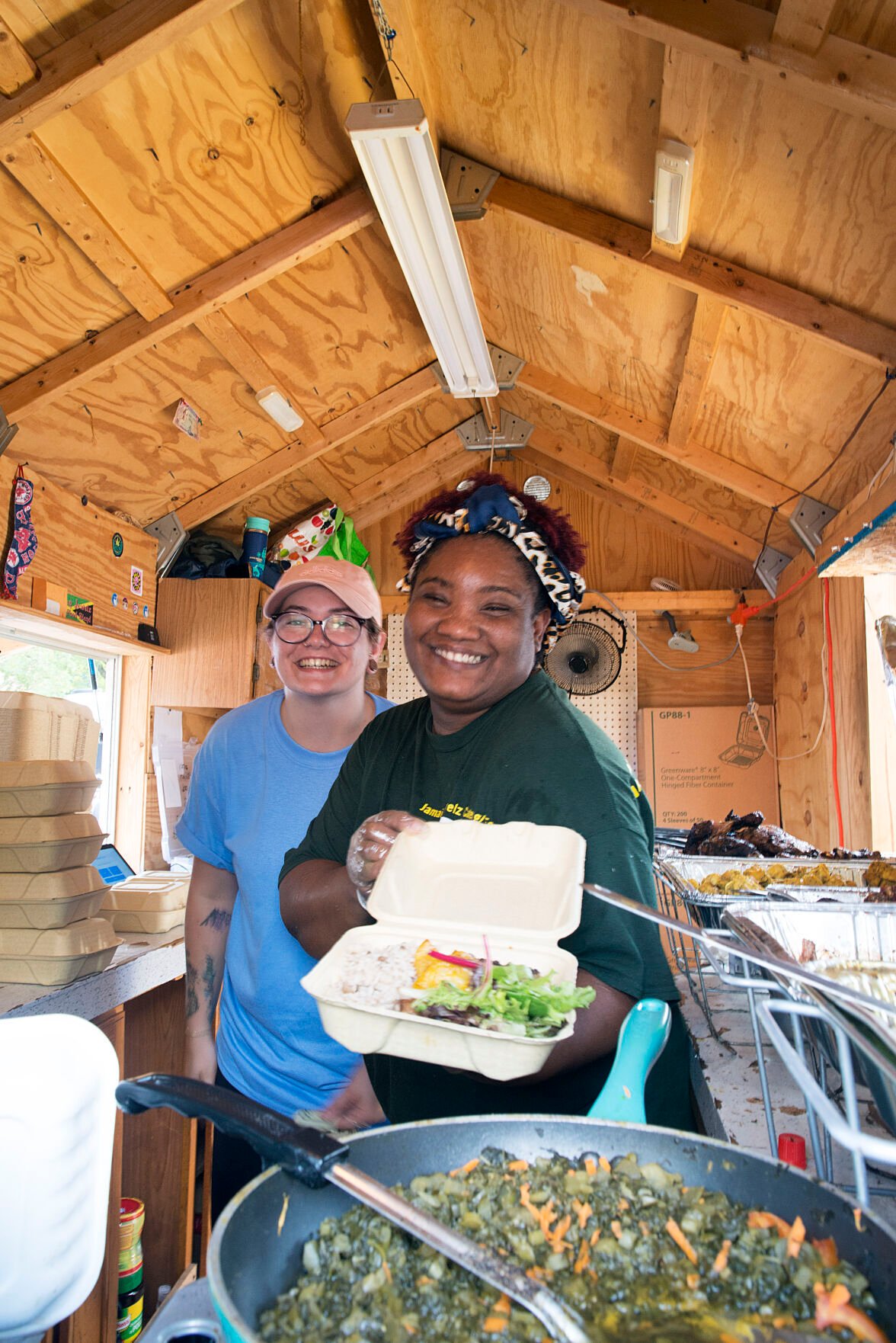 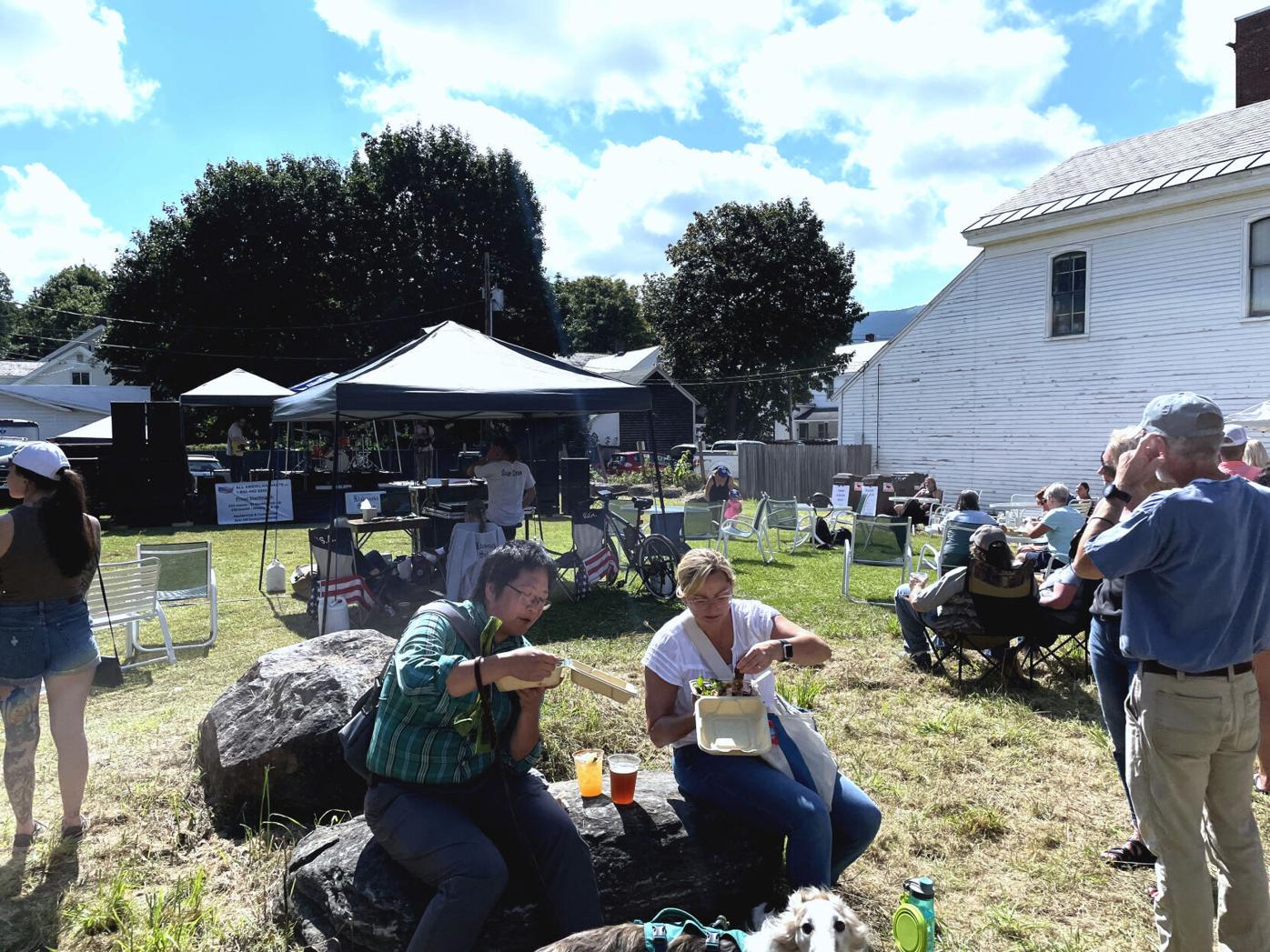 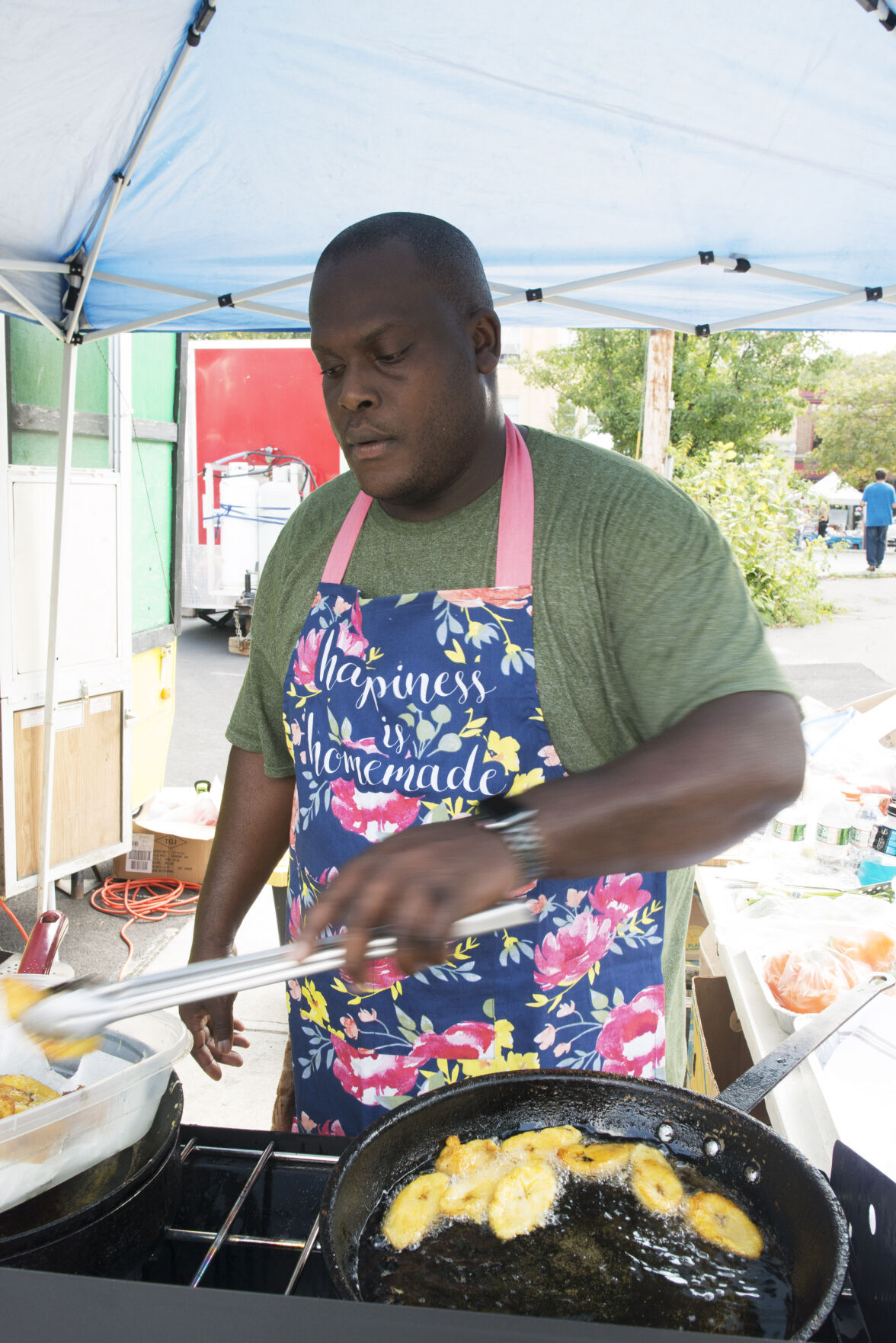 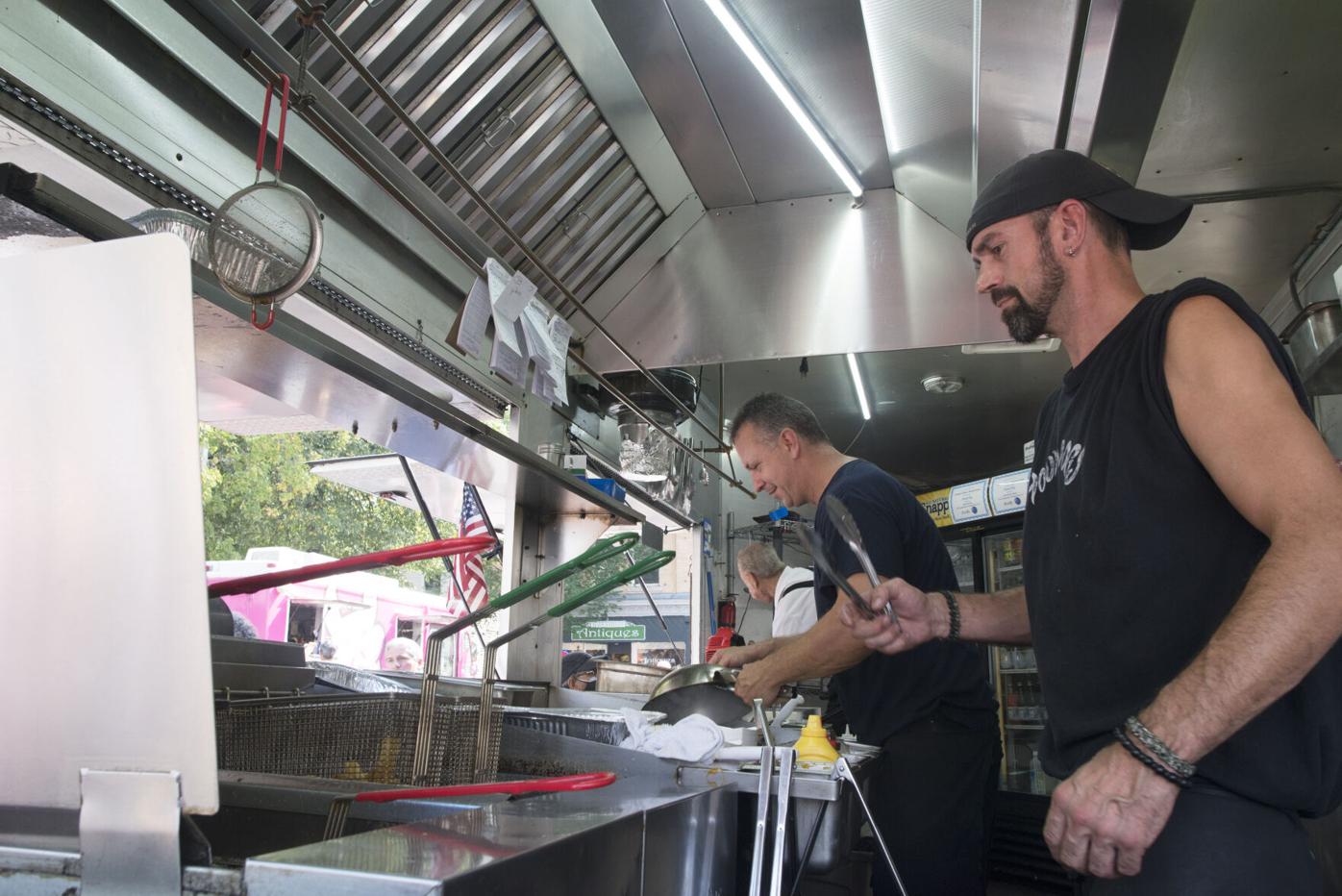 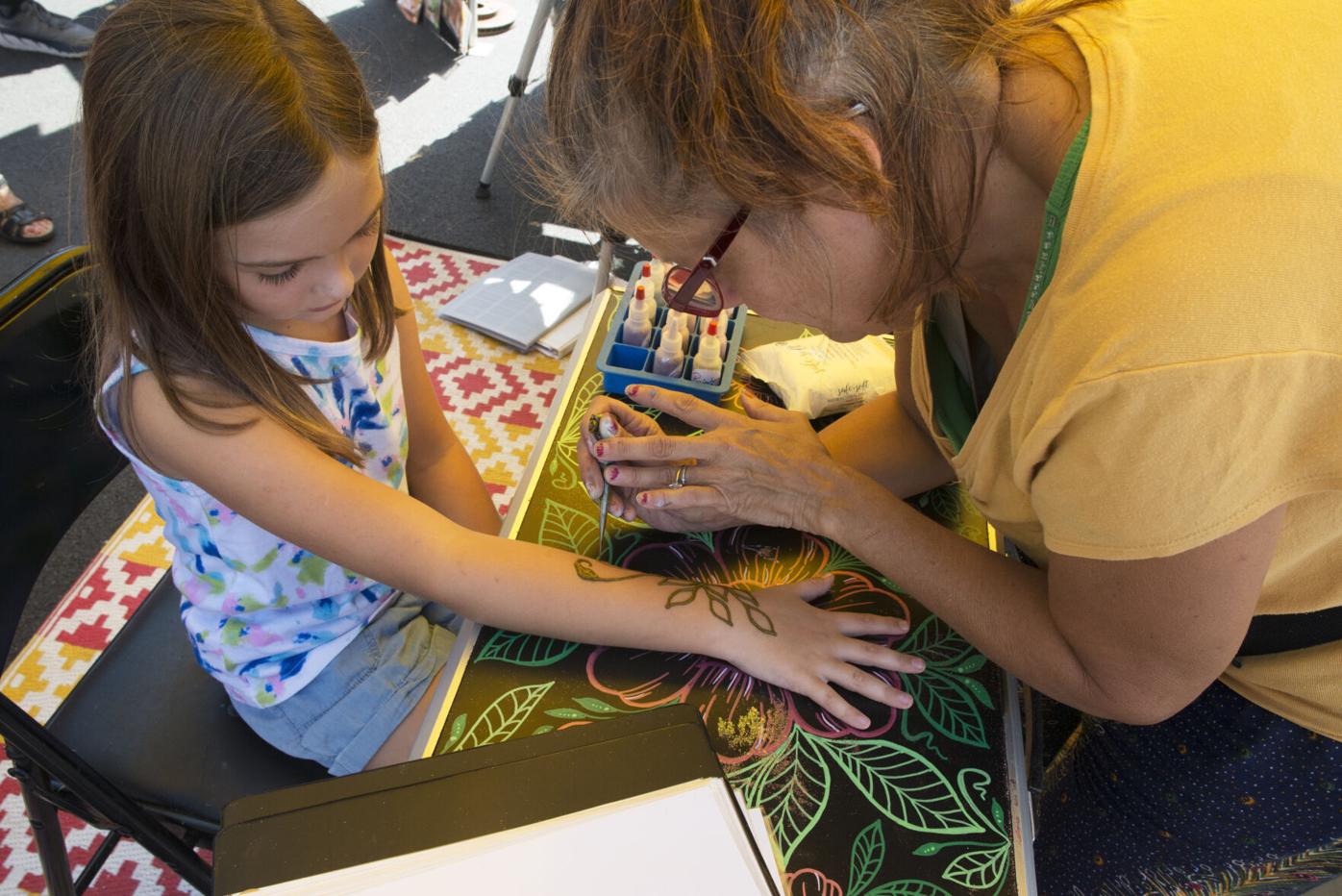 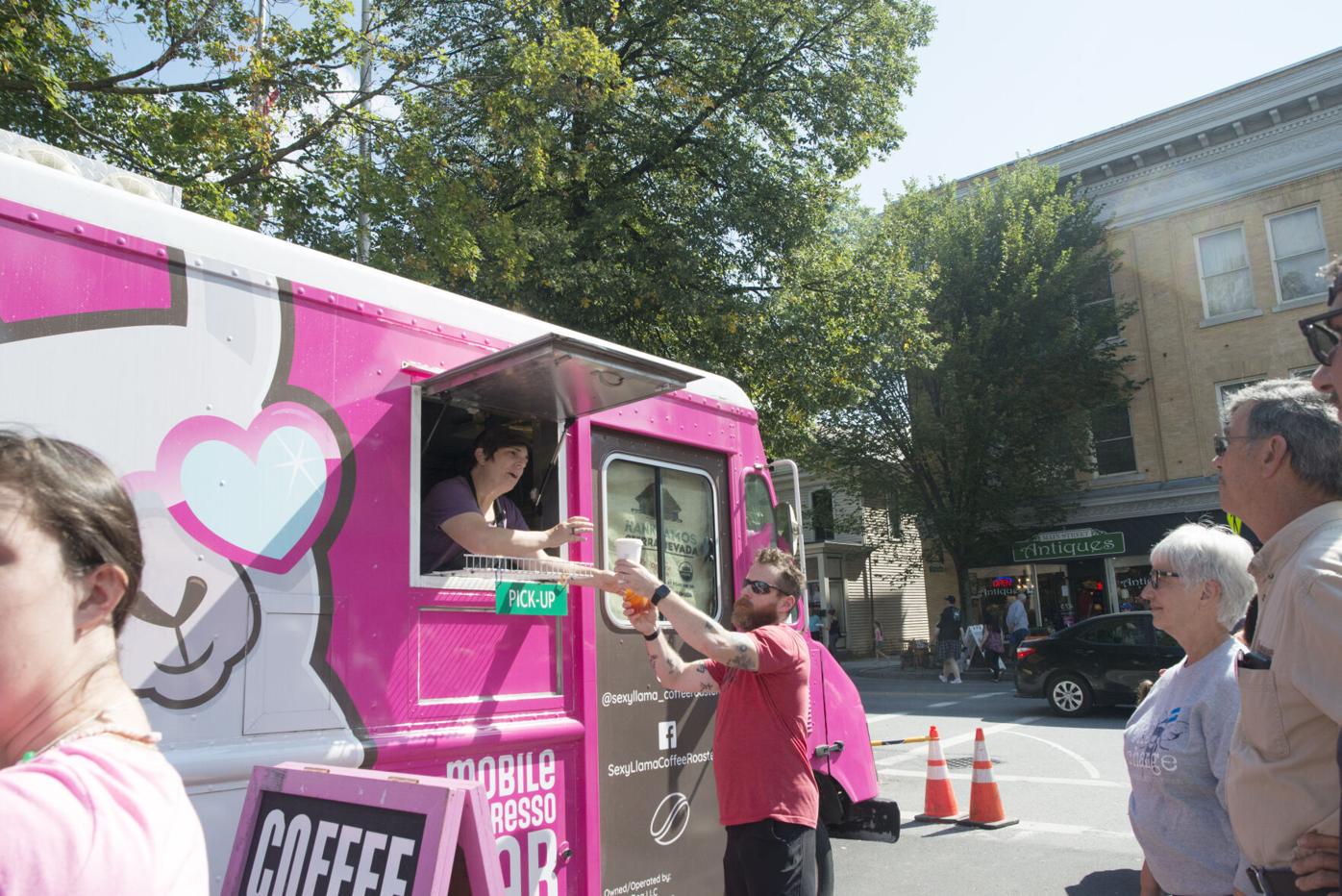 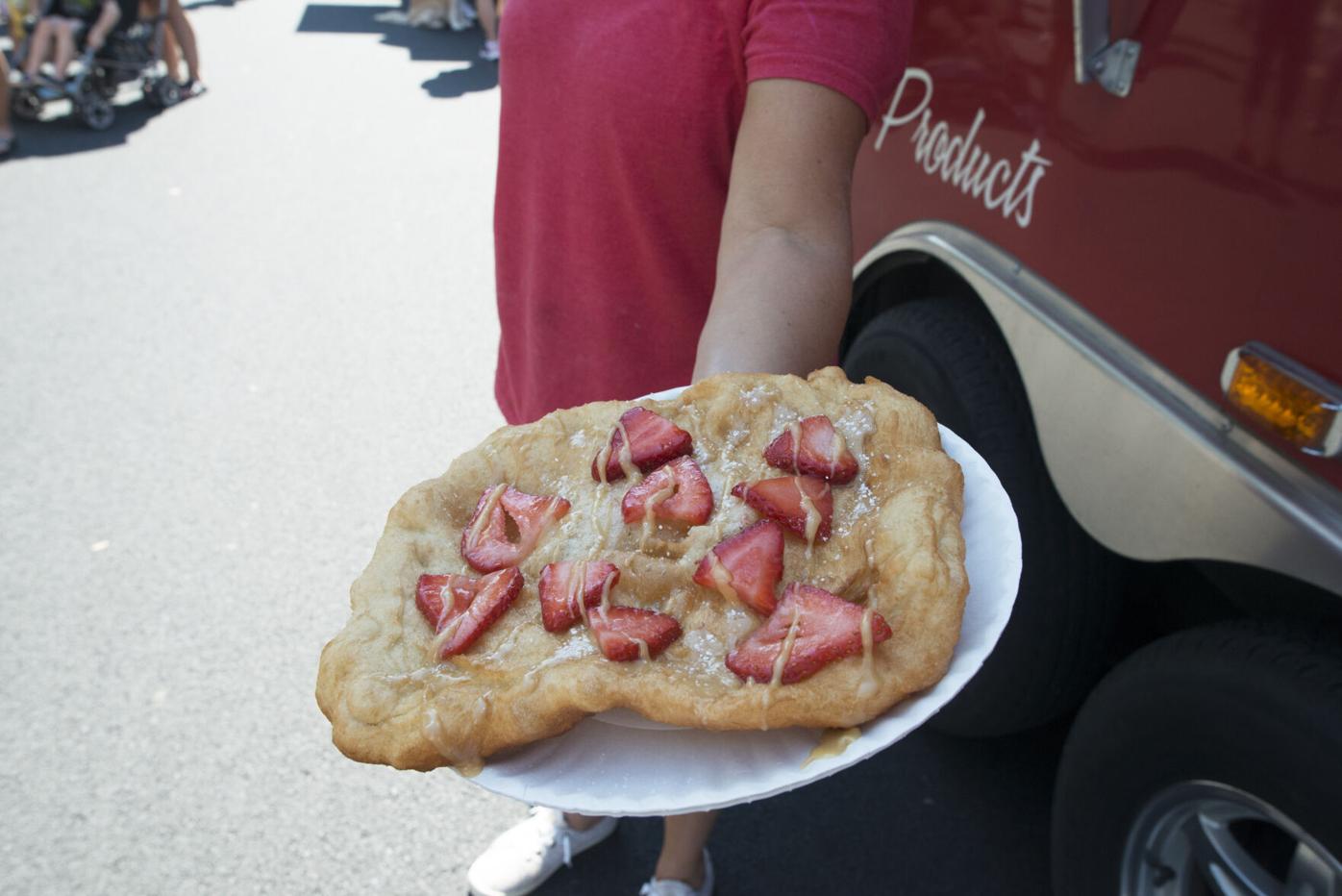 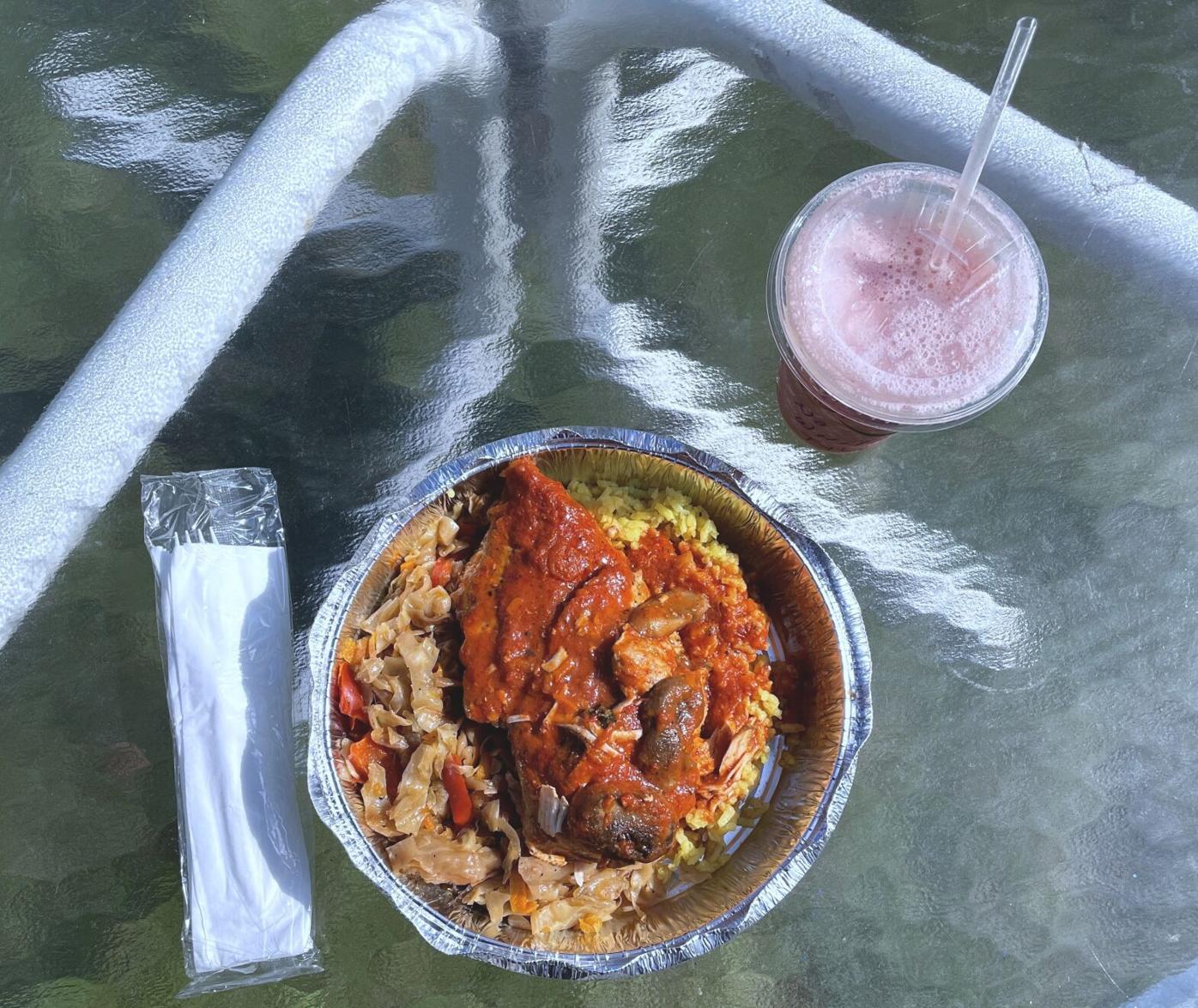 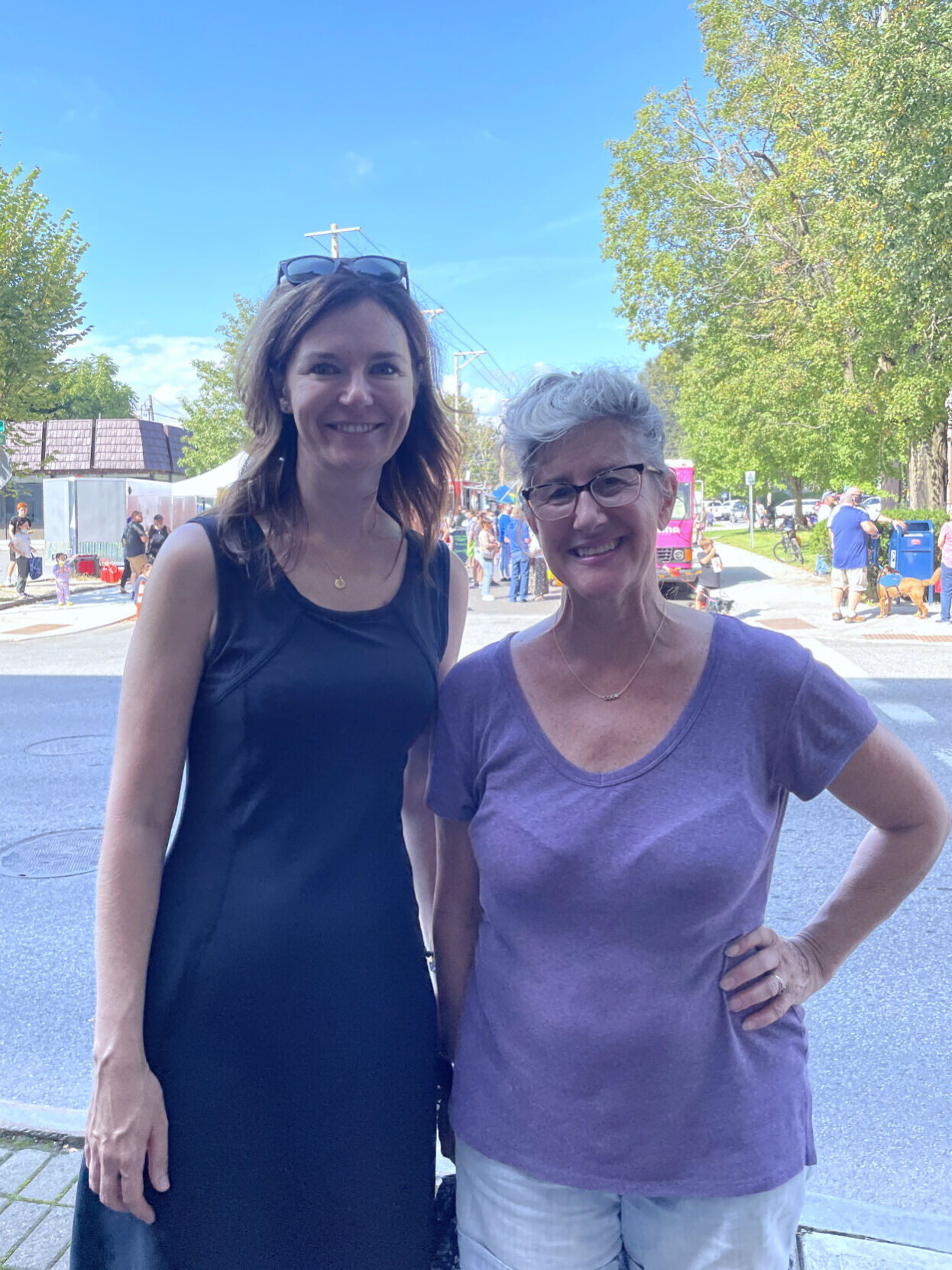 From 10 a.m. to 6 p.m. food vendors from Vermont and New York plopped their food trucks on School Street and served crowds a variety of different cuisines, such as Jamaican, Slavonian and barbeque, among others. Dishes included maple fried dough topped with strawberries, chicken francese with fried cabbage and rice, strawberry-banana fruit smoothies and Thai milk tea.

Musical act Beard and Glasses played the Harte Lot across the street from 11 a.m. to 2 p.m. They were followed by All Ten & John from 3 to 6 p.m. Madison Brewing Co. served drinks to the concert-goers.

Besides food, drink and music, children could get henna tattoos and face painting done by Teach Art 2 Me.

Admission to the event was free. According to co-organizer Betsy Greenawalt, the goal of the festival was to be a “fun, free, safe, outdoor event to bring people to downtown Bennington,” she said.

At the time of the festival, she was happy with how it turned out, saying it was “going very well for a post-COVID event.”

Attendees and vendors alike were also happy with the event. Vendor and chef Julian “Mama Jewels” Perkins, of Bellows Falls-based caterer Jamaican Jewels, was happy to meet other people and soak up the atmosphere.

“Thanks to all people willing to try something new,” she said.

MOOver driver Vince Rice, of Wilmington, stated he enjoyed the variety of food, as well as the “fresh air” and “beautiful” weather.

Despite the positive atmosphere, the pandemic still remained in the background. Last year’s food truck festival was cancelled due to COVID-19, making this year’s the third annual instead of the fourth.

Co-organizer and select board member Sarah Perrin said they took precautions this time around to keep people distanced. Unlike previous years, they did not get a tent for the main food-serving area.

They also arranged the festival in a zig-zag layout. Attendees would have to go from School St. to Main Street and walk down to the Harte Lot to see the entertainment. Tables were also placed in the lot at a distance from each other.

She noted some vendors posted vaccination cards on their trucks but didn’t require that of them.

“The only thing we did was ask vendors to bring hand sanitizer,” said Greenawalt.

Attendees and vendors cited the high vaccination rate and the outdoor environment as reasons not to be concerned about COVID-19. While Rice was concerned, even he walked around the School St. crowds unmasked.

“I wouldn’t be surprised if there wasn’t a spike in cases,” he said.

Chief of Police Paul Doucette, who handed out free popsicles as part of the Bennington Police Association’s “Operation Copsicle,” was similarly unfazed by rising cases.

“We’re not concerned about COVID at all at this point,” he said.

Nonprofit website CovidActNow.org identifies Bennington County as having a “very high” risk level. As of Sept. 18, the county had a “critical” number of 43.1 cases per 100,000 residents; a “medium” infection rate of 1.07 per 100,000; and a “medium” positive test rate of 4.1 percent per 100,000. According to the website, 66.3 percent were fully vaccinated. According to the Vermont Department of Health, up to 82.4 percent of Bennington County residents have received at least one dose.

At Saturday’s event, most attendees came unmasked. Those interviewed touted that they were fully-vaccinated.

“People just seem happy to be out and about,” said Perrin.

The Brattleboro area will have its own New England Street Food Festival on Saturday, Sept. 25 from 11 a.m. to 5 p.m. at Kampfires Campground in Dummerston, with a variety of food trucks, beverages, live music and performances by the New England Center for Circus Arts.