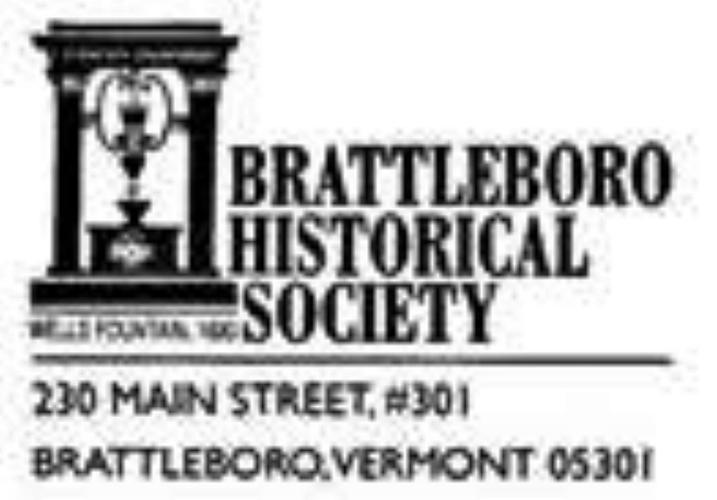 Revere House on the southern corner of Elliot and Main streets in Brattleboro. Jim Fisk served as a waiter here. 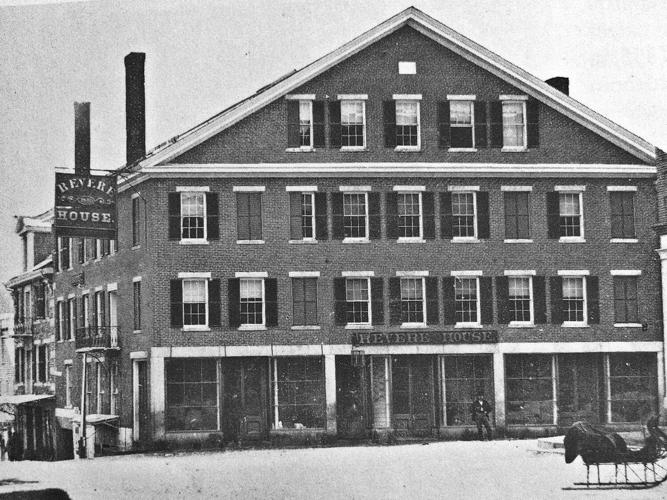 Fisk is buried in the Prospect Hill Cemetery. The marble monument cost $30,000 and was created by Brattleboro's Larkin Mead. A Fisk biographer wrote he "never saw a more appropriate monument. Fisk had trouble with women all his life, so they put four of them over his grave to haunt him through eternity." 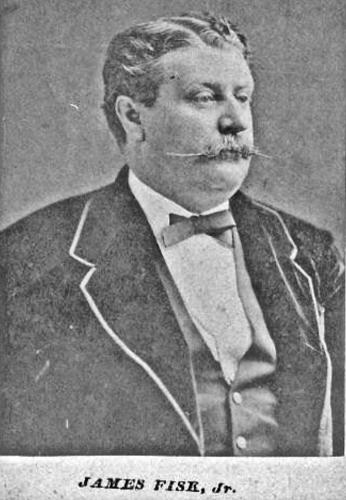 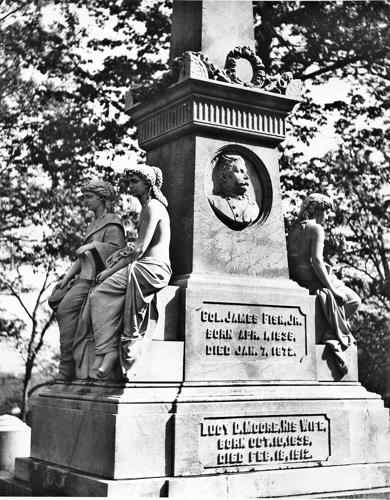 Revere House on the southern corner of Elliot and Main streets in Brattleboro. Jim Fisk served as a waiter here.

Fisk is buried in the Prospect Hill Cemetery. The marble monument cost $30,000 and was created by Brattleboro's Larkin Mead. A Fisk biographer wrote he "never saw a more appropriate monument. Fisk had trouble with women all his life, so they put four of them over his grave to haunt him through eternity."

On April Fool's Day in 1835 Jim Fisk was born in Pownal, Vermont. His father worked in Pownal and Bennington woolen mills for a few years and then became a peddler. When Jim was 8, his family moved to Brattleboro. His father sold household goods on the road, specializing in silk dresses and other products for farmers and their wives. Mr. Fisk was very successful and had up to eight wagons on the road selling goods in southern Vermont and New Hampshire, eastern New York, and western Massachusetts and Connecticut. In 1849, Mr. Fisk built the Revere House on the southern corner of Elliot and Main streets.

This successful economic environment gave young Jim an early exposure to the business world. However, Jim grew up restless. At the age of 12 he dropped out of school. He worked for his father, serving as a waiter in the Revere House, and he also tried his hand in the peddler trade.

At the age of 15 he joined Van Ambergh's Circus and traveled from town to town selling tickets, feeding animals and learning to be independent. At 18 he returned to Brattleboro and entered into partnership with his father in the peddling business. Jim brought a circus-style flamboyance to the peddling profession, painting the wagons bright colors, wearing fancy suits and selling like a circus ringmaster.

When Jim was 19 he married 15-year-old Lucy Moore of Brattleboro. This was legal at the time but today would be illegal. After five years in the peddling business Jim Fisk became very successful and caught the eye of the Jordan and Marsh Company of Boston. Jim and Lucy moved to Boston and he began working for the retailer Jordan Marsh when he was 25. A year later, when the Civil War began, Fisk saw an opportunity to make a lot of money.

As the war started he sold blankets to the Union Army for huge profits. He wined and dined government officials and gained large government contracts to provide clothing for the soldiers. He then made millions by illegally smuggling southern cotton to New England mills during the war. He bribed railroad operators, ship owners and government officials in order to break federal laws and transport the cotton to mills controlled by the retailer Jordan Marsh and himself. Fisk had many people working for him in the south as they searched for available cotton, including his father. The Civil War made it very hard to find cotton goods in the north and Fisk became a millionaire before the war ended in 1865.

After the war, at the age of 30, Fisk moved to New York City and became a stock broker. He invested in the stock market, railroads and steamboats. Through bribery and manipulation he was able to gain control of the Erie Railroad and made tens of millions of dollars.

The Black Friday scheme of 1869 caused many people to lose a great deal of money. Fisk and business partner Jay Gould attempted to corner the gold market by bribing government officials, artificially raising gold prices by 30%, and then selling the gold before the market dropped. Over 500 million dollars' worth of gold was traded on that Friday and much of it was lost through speculation. It was reported that Fisk and his partner were able to make 11 million dollars before the government stepped in and stopped Fisk's attempt to control all of the available U.S. gold. Economists say this event caused a mini-depression in our country.

The term "Black Friday" is now used to describe the day after Thanksgiving when there are huge sales in many stores. These two events are connected because now on Black Fridays, people are in a panic to buy things before the deals end. The same approach was taken by many back in 1869 when people bought gold in a panic thinking the value would continue to go up. When the price went down quickly, many people lost a great deal of money.

While most of Fisk's money was gained by deceit and bribery, he was also known to donate large sums of money to needy causes. When the Great Chicago Fire happened in 1871 Jim Fisk led the New York City relief effort and sent trains of supplies to Chicago to help the city get back on its feet. Even though he spent most of his time in New York City, he had married a girl from Brattleboro and often donated to worthy causes in the area like fire department equipment and cemetery maintenance.

Fisk continued to live an exciting life in New York City but, in 1872, he was shot and killed by an ex-business partner. Fisk had been involved in an affair with a New York City actress for two years. A business partner of his also began an affair with the same woman and a scandal ensued. During their affair Fisk had written love letters to the actress and now she and her new boyfriend threatened to release them to the press. The new couple tried to blackmail Fisk but he was able to stop the release of the letters by getting a friendly judge to issue a court order banning the publication of the letters. Fisk eventually agreed to pay the couple $10,000 but the former business partner thought the letters were worth at least $40,000. The two men met, a disagreement occurred and Fisk was shot by the former business partner.

Fisk's body was brought back to Brattleboro and he was buried in the Prospect Hill Cemetery. The elaborate marble monument erected at the cemetery for Jim Fisk cost $30,000 and was created by Brattleboro's Larkin Mead. The monument features statues of four young women each holding a representation of Fisk's financial empire: a sack of coins, railroad stocks, steamship shares and a theatre emblem. A Fisk biographer wrote he "never saw a more appropriate monument. Fisk had trouble with women all his life, so they put four of them over his grave to haunt him through eternity."

Jim Fisk had many nicknames. He was known as Big Jim, Diamond Jim, and Jubilee Jim. Many historians place him in the group of wealthy men known as the Robber Barons of the Gilded Age. After researching his story we tend to think of him more as a wheeling, dealing, boisterous circus worker and peddler who learned his ways traveling the quiet country roads of New England. We'd like to thank BAMS 7th graders Gabe, Evelyn, and Eben for researching much of this story.