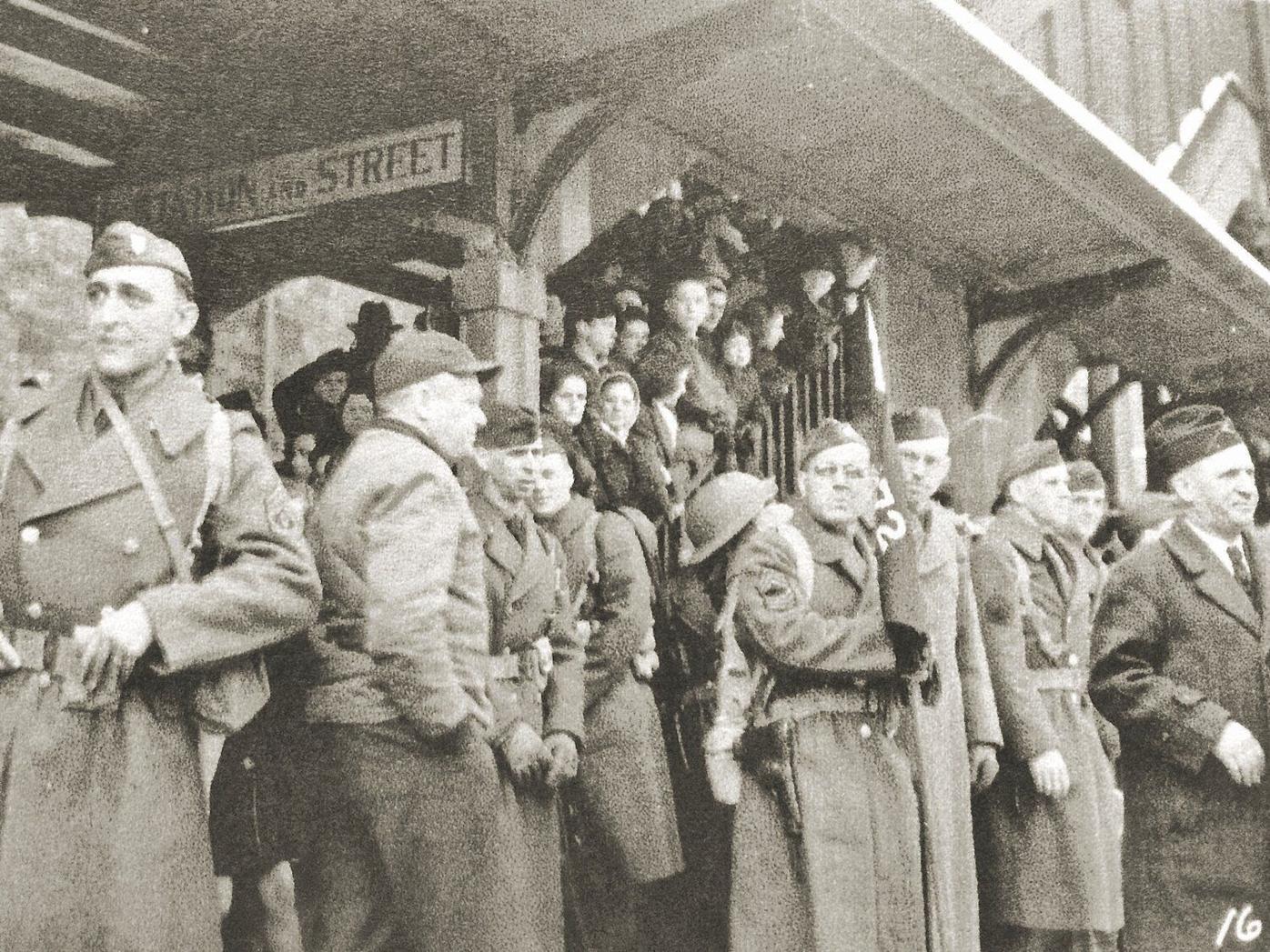 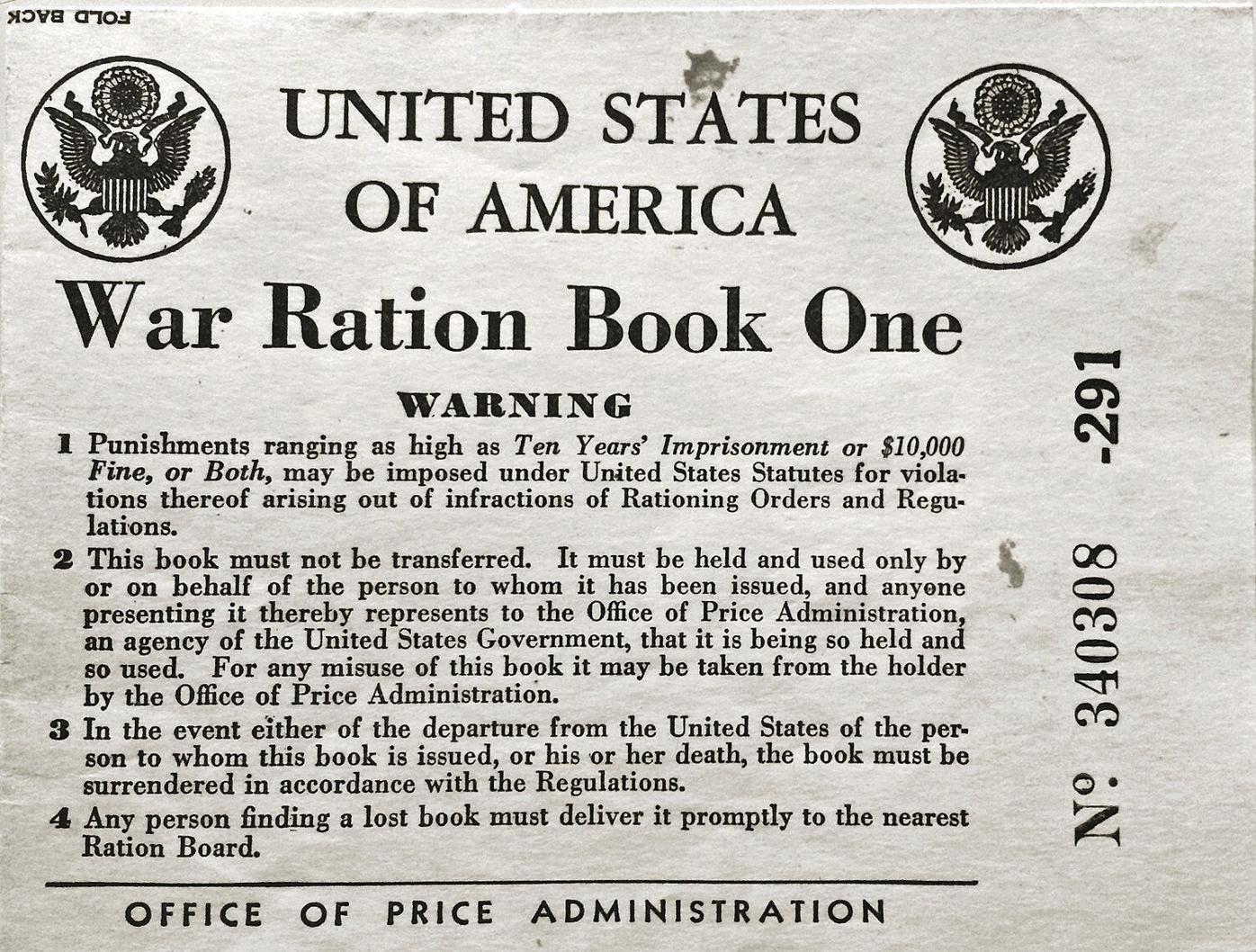 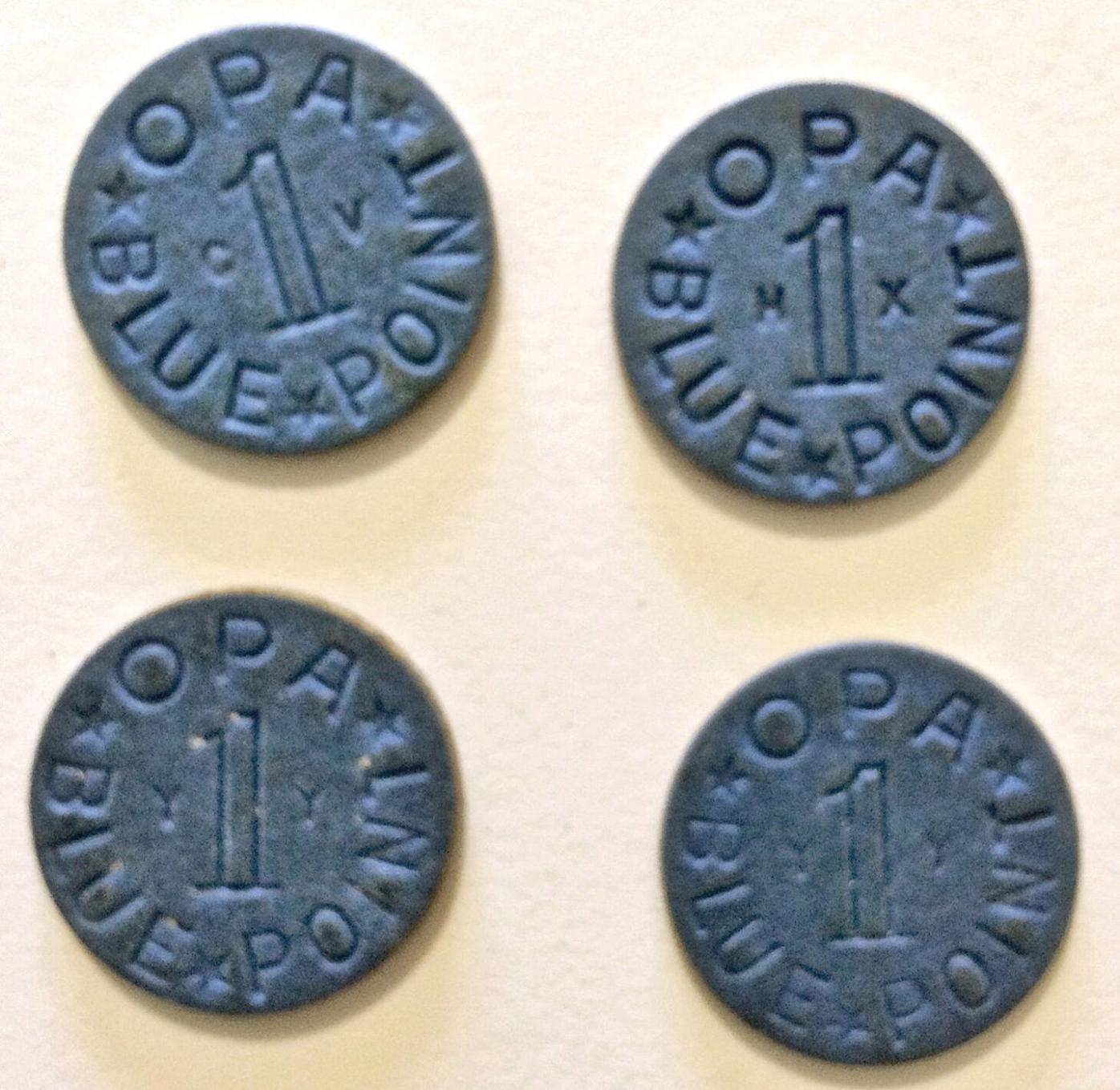 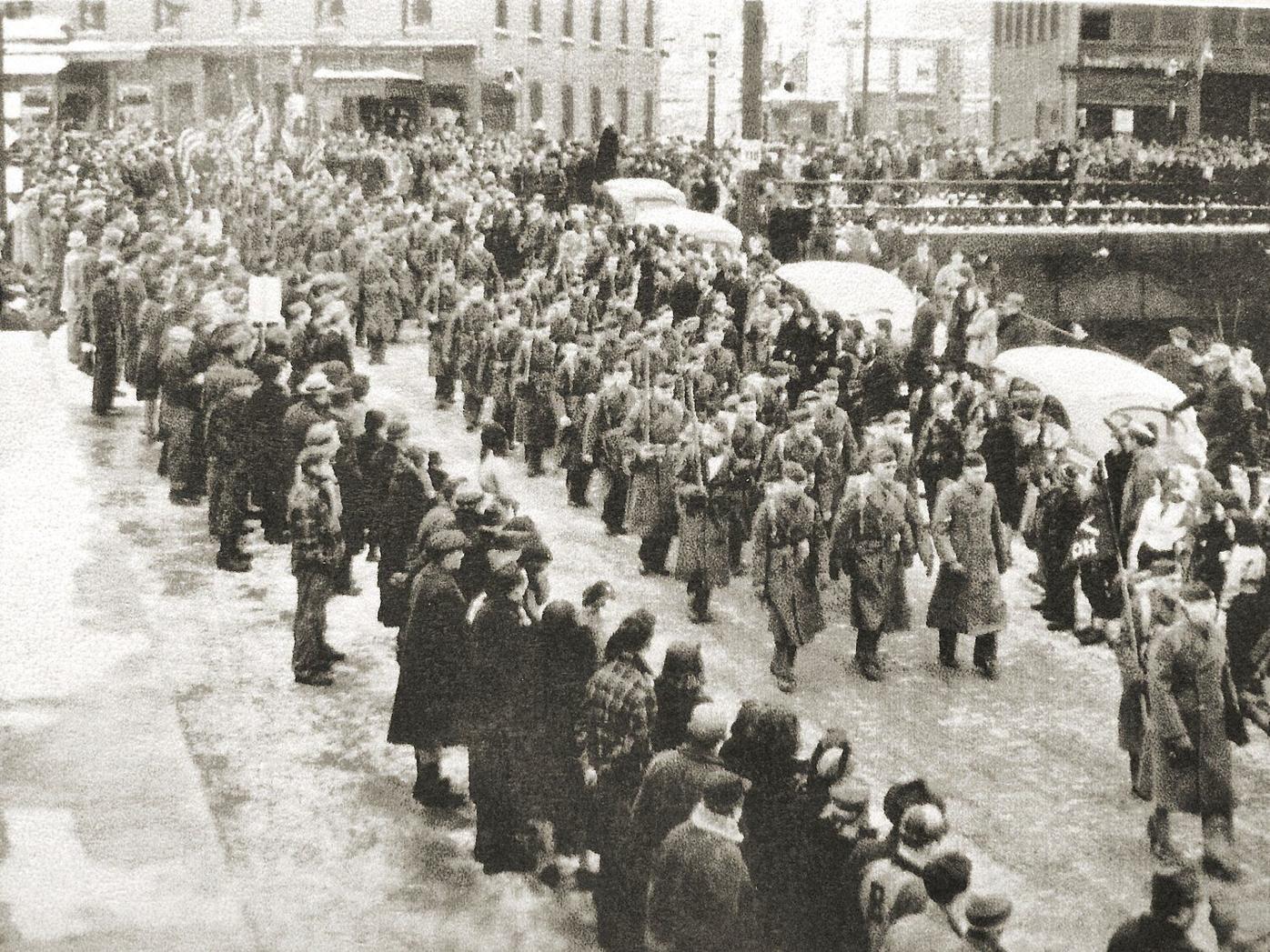 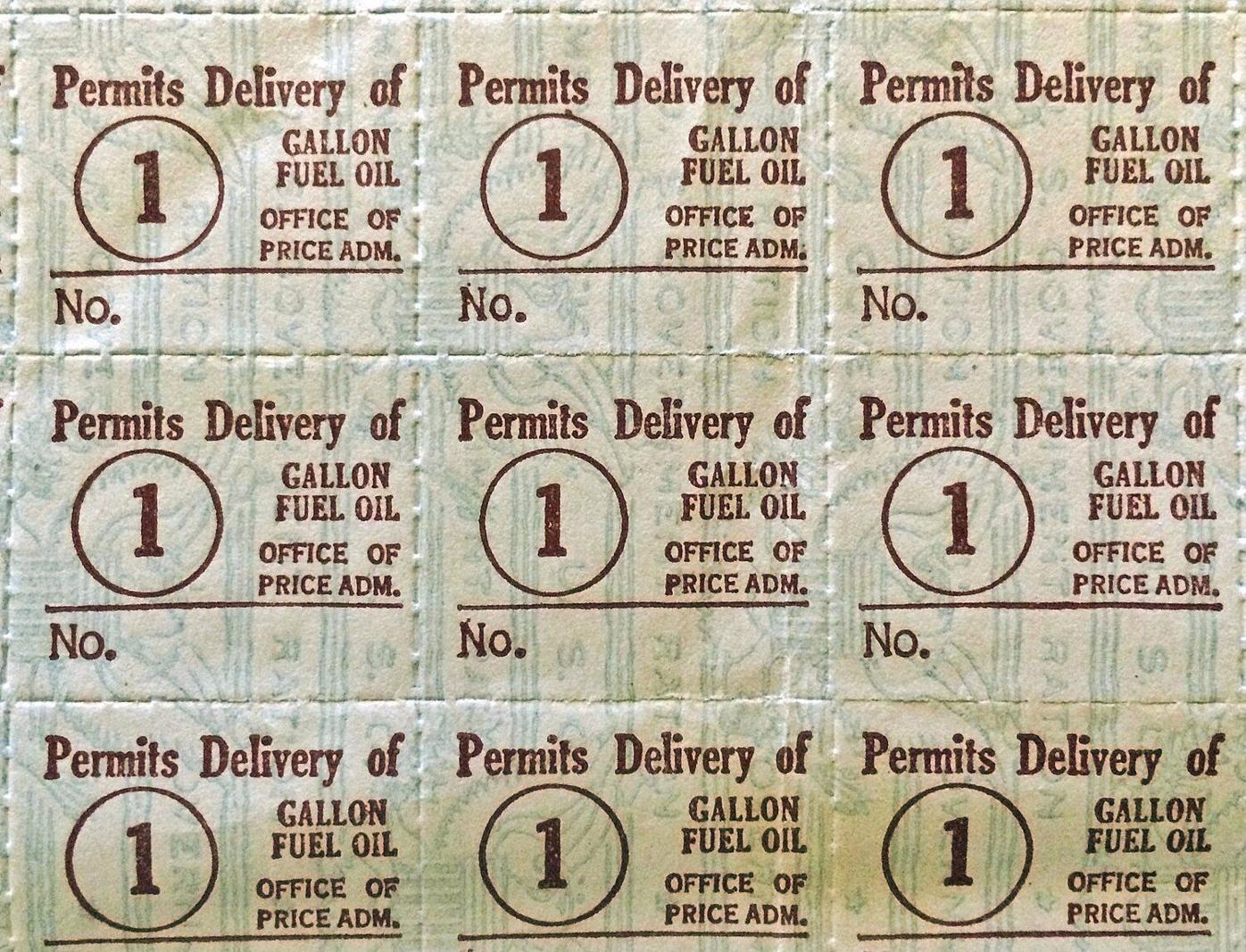 During World War II, the United States was facing a crisis. War production, supply chain disruption and worker scarcity meant that many products were not readily available. In January 1942, Congress passed the Emergency Price Control Act to combat inflation and federally organize the production and supply of scarce products such as tires, sugar, gasoline, fuel oil, coffee, meats, shoes, and processed foods.

The act also created the Office of Price Administration, (OPA). The OPA had the power to place price ceilings on virtually any product. At the peak of price controls almost 90 percent of retail food prices were frozen. The OPA was also responsible for overseeing the rationing of scarce products.

In 1942, Fred Brynn, the OPA's Vermont director, explained to a Burlington Free Press reporter that rationing was by no means a new idea. "Always when anything is scarce, it is necessary to take measures to keep the more selfish from hoarding and getting more than their share, while others have to go without," Brynn said. Rationing and fixing price ceilings for commodities was in harmony with the American traditions of fairness and looking out for one another, he added.

Locally, 14 grocery stores got together and sponsored an educational ad in the Brattleboro Reformer to help explain the rationing system. "Rationing was designed to protect you-to see that you get your share," the ad read. "Rationing is a necessary wartime measure. It curbs hoarding. Without rationing, others would stock up on supplies for many months to come. Merchants would lose supplies too quickly. An artificial demand would be created for certain articles; prices would rise. Inflation would start. Rationing helps protect against this."

Each community formed a local rationing board to oversee the federally mandated system. Jesse Haynes, the retired manager of Swift and Company, became the chair of the Brattleboro Rationing Board. In January, 1942 the first item to be rationed was tires. By March, plans were made to ration other items such as sugar and gasoline.

The Rationing Board began meeting in the town manager's office at the Town Hall on Main Street. They realized a local infrastructure was needed to begin a more elaborate rationing system and turned to the public schools. School superintendent Guy Powers, high school principal Joseph Wiggin, and Rationing Board members Jesse Haynes and Edmund Root went to state-sponsored meetings to get ready for gasoline and sugar rationing.

Over three days Brattleboro citizens registered for these programs during the evening hours at Canal Street, Green Street and Academy Schools. The town was divided geographically and alphabetically to make the job as methodical and orderly as possible. Principals of the three schools, teachers and volunteers registered hundreds of people.

In July, 1942 Jesse Haynes resigned as chair of the Rationing Board to become one of the three paid board clerks. As the war continued the number of board clerks was expanded to six. They kept track of ration systems for tires, gasoline, automobiles, fuel oil, meats, canned goods, sugar, coffee and shoes. Haynes became the chief clerk and continued with the bookkeeping skills he had first developed more than 40 years earlier. The high school's assistant principal, James Nelson, took Haynes' place on the board. Before the war ended there would be more than 25 people who would serve at one time or another on the Rationing Board.

Charles Perkins became the chair of the Rationing Board. Board membership was a volunteer position but as the responsibilities grew it began to feel like a full time job. Perkins had moved to Brattleboro in the 1920's. He and his father purchased the 265-acre Barber Farm on Upper Dummerston Road and raised Guernsey and Holstein cows. In 1938 Perkins sold the farm and opened the Perkins Guest Home on Western Avenue.

Perkins would serve as chair of the board until after the war ended. Edmund Root was the other Rationing Board member who would serve throughout the war. He was originally from Craftsbury, and served as Windham County Agricultural Extension Agent from 1930 to 1946.

The Rationing Board moved into offices in the Crosby Block. As the war continued many file cabinets were filled with ration applications and paperwork. In a Reformer editorial from December, 1942 entitled "Rationing Board Blues" it was written, "The gentlemen on the rationing board are no different from you except that they were asked to serve in one of the hardest volunteer war jobs. ... Let us assume that you were asked to serve on the rationing board at no pay and long hours. Let us assume that you have finished your regular breadwinning job, have snatched a bite to eat downtown, and have rushed to the rationing office for your fourth consecutive night in the week.

"You face a batch of applications, many of which were made out wrong. You take those applications and apply a formula to them, arriving at a mathematical result. This process goes on for several hours, and you are too weary even to realize that as you leave for home you are probably just about the weariest patriot in Brattleboro."

The ration system was stringent and not universally loved. The federally overseen program struggled at times to be regionally flexible. One troubling issue was the federal government's slow response to seasonal sugar needs for canning food. Sugar needs expanded when crops became available for canning and the government did not always expand rations to coincide with demands. Edmund Root and Charles Perkins were two local Rationing Board members with farming backgrounds who struggled with enforcing federal guidelines that didn't match the needs of the community. The Rationing Board appealed up the chain of command and eventually the federal government became responsive to Brattleboro's canning needs.

From March 1941 to November 1945, the ration program for food, fuel and automobiles was operational. Rationing for some items, like sugar, continued after the war. The ration books were pretty basic. A numbered coupon in the booklet was torn out and exchanged, along with money, for food items. The booklets were color coded for meats, canned goods, sugar and coffee. A customer could only buy a rationed item if they possessed the necessary coupon and the money needed to buy the product.

The Rationing Board members devoted hours of their time, without pay, to one of the toughest home front jobs of the war. They took a lot of grief from those who thought others were getting away with cheating the system. They also took grief from those who thought the rules and formulas should not apply to them. Charles Perkins, Jesse Haynes and Edmund Root remained with the rationing system throughout the entire war and, as a result, earned respect from the community. In August, 1946 a Reformer article said of the three, "they exerted the greatest effort to administer the program conscientiously and treat all persons fairly."

In fact, Charles Perkins was awarded a medal for his service. He and local Red Cross Production Chair Nina DeWitt were each honored by the state for donating more than 5,000 hours to the war effort. No one else in Vermont came close to accumulating that many hours. Nina DeWitt was the leader of the Red Cross sewing and knitting brigade which shipped out thousands of garments for the armed forces and civilian war victims. Mrs. DeWitt had assumed the job in 1916 and continued leading the effort through 1944.

Our public schools have been closed for over five weeks now but students are still completing school work. Some BAMS students have even continued to contribute research for these local history articles. We'd like to thank Jacob, Brandon, Priya, Ryan, Karson, Cayden and Koby for their contributions this week in Brattleboro history.