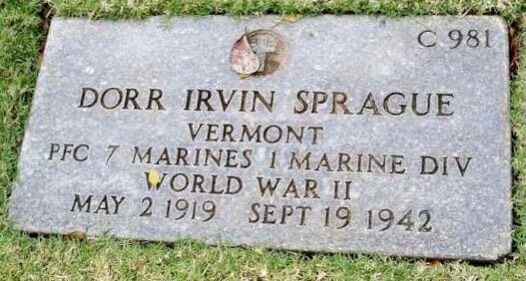 The grave of Brattleboro native Dorr Irvin Sprague in the National Memorial Cemetery of the Pacific, Honolulu Hawaii. 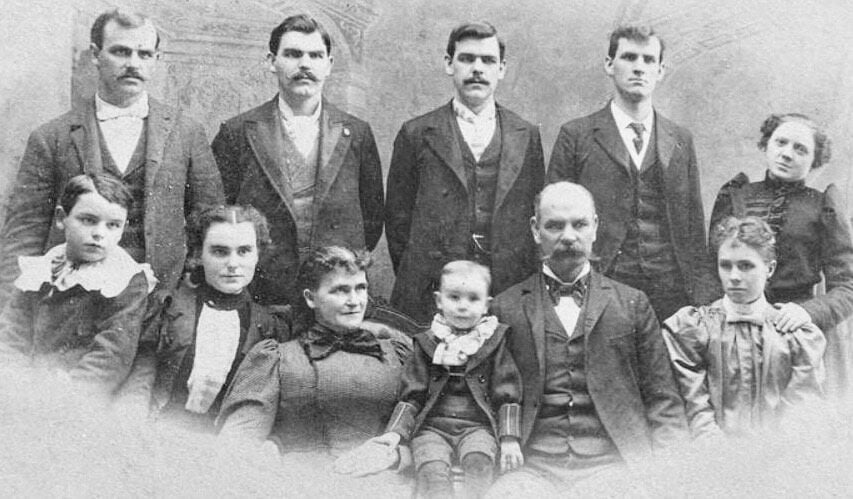 The Bloxsom family in about 1900; Edward is in the front row with mustache. 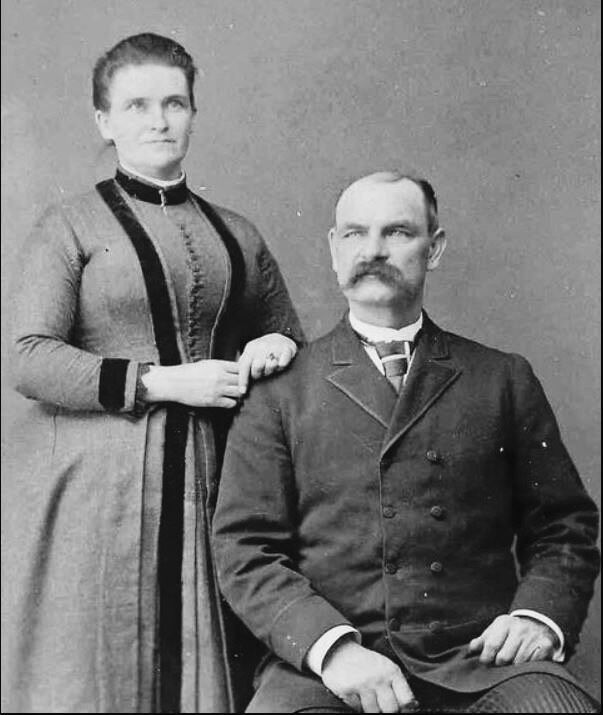 Edward and Mary O’Leary Bloxsom, in about 1900.

The grave of Brattleboro native Dorr Irvin Sprague in the National Memorial Cemetery of the Pacific, Honolulu Hawaii.

The Bloxsom family in about 1900; Edward is in the front row with mustache.

Edward and Mary O’Leary Bloxsom, in about 1900.

The Brattleboro Historical Society receives requests in several forms. Some individuals respond to our Facebook posts, some send emails to histsoc@sover.net, others write letters, and still others leave messages on the answering machine. This week we’ll review two of our recent requests.

A few weeks ago, we received an email from a gentleman whose great uncle had been awarded a Purple Heart for action in the South Pacific. The man to whom the medal was awarded died during World War II at Guadalcanal in the Solomon Islands. He died early in the war, in September of 1942. The medal was sent to his mother and handed down through the family. Now his great-nephew wants to donate this medal to the historical society to be included with our WW II Memorabilia. What an honor to be asked to hold this very special object within our collection.

So, who was this young man? And why did the Brattleboro Reformer call him the “First Brattleboro Boy Killed in Action”? His name was Dorr Irvin Sprague.

Sprague enlisted in the Marines in October, 1940. He was 21 years old. His enlistment papers say he had brown eyes, was 5’7” and weighed 140 pounds. He was working for the Deerfield Glassine Co at the time of his enlistment.

Dorr trained in South Carolina, Cuba, and finally Parris Island, South Carolina. The newspaper reported that he visited his grandfather in Jacksonville, Vermont right before the outbreak of World War II. It was believed he was overseas for about seven months at the time of his death. There is no further mention of his whereabouts until the notice of his death in the South Pacific. Can you imagine not knowing where your son, your brother, your relative, was for seven months? And waiting for the telegram or the knock on the door to tell you that he had been killed in action?

Dorr’s father died of pneumonia when Dorr was less than a year old. His mother moved the family from Colrain, Massachusetts to Brattleboro where she found work as a telephone operator, and later a taxi cab dispatcher. Dorr grew up in Brattleboro and, after attending the local high school, worked at Woodward Lumber and the Brattleboro Restaurant.

At the time of his enlistment he was working in northern Massachusetts. In April, 1945 the Dorr Sprague Marine Corps Auxiliary was organized at a meeting of the American Legion. As the paper said, Sprague was “the first local Marine to give his life in World War II.” Dorr’s mother and sister were some of the first officers of the organization. Dorr’s mom lived in Brattleboro for the remainder of her life, passing away at the age of 97 in 1992.

Dorr Irvin Sprague was buried in the National Memorial Cemetery of the Pacific, Honolulu Hawaii, on January 12, 1949, (he died on September 19, 1942 so this would have been a reinternment) with a note saying that a flag had been sent to his family.

In another request, we received a Facebook inquiry from the great great granddaughter of a man who was killed while working in Brattleboro over 100 years ago. She was interested in knowing any details of the incident.

The man was Edward Bloxsom and, at the time of his death in 1909, he was 68 years old. Bloxsom was a construction foreman for Crosby and Parker, the company contracted to build the Pleasant Valley Reservoir. The reservoir was a project of George Crowell’s and would eventually become the Brattleboro Water System.

Bloxsom had worked for Crosby and Parker for fourteen years. Crosby and Parker was a construction company that focused on concrete installations. The company specialized in building dams, water supply systems and sewers. They also excavated building sites and laid foundations for large factory buildings.

Edward Bloxsom was born in Limerick, Ireland. He and his mother moved to Perkinsville, Vermont in 1860. When Edward was fourteen years and four months old he enlisted in the 7th Vermont Regiment. He is thought to be one of the youngest recruits to have served during the Civil War. He served for about two and a half years.

After the Civil War Bloxsom became a stone mason. As he advanced in the construction trades he became an expert in dynamite work as well. For the last twenty five years of his life he worked with dynamite and stone on many construction projects.

In 1909 he had been working in the Brattleboro area for about five years. The Pleasant Valley Reservoir project had been controversial and dangerous. Some people were opposed to the construction of the reservoir as it would divert water from the Whetstone Brook. There were businesses along the Whetstone Brook that relied on water power to operate their machinery. These business owners thought they would suffer if the reservoir was completed.

At one point dynamite was stolen from a work site shed and a retaining dam was blown up so water would flow back to the Whetstone Brook. No one was injured and no one was prosecuted for the robbery or vandalism.

There was sabotage at the work site but there were also challenges in court. Reservoir construction was stalled by businesses along the Whetstone Brook who took the developers of the water system to court over claims to water rights. These court battles resulted in work stoppages. This meant that construction was often not carried out during optimum weather conditions as timelines were disrupted by these disturbances.

In September, 1909 Edward Bloxsom was overseeing the installation of water pipes on the West River Road. In order to clear a path for the water pipe he set dynamite to blast through rock about eight feet below ground. He connected the dynamite charge with an electric battery located over100 feet away in a corn field.

After giving the “all clear” signal he turned the switch and the explosion occurred. Bloxsom was in the corn field so he did not see the large piece of rock about two feet in diameter that flew through the air. Although his work crew shouted, he was unaware of his danger, as the corn blocked his view of the blast site. The boulder crashed through the corn and struck Bloxsom in the chest. His injuries were massive and he died within twenty five minutes of the accident. The Italian laborers in his work crew grieved his death and refused to work for the remainder of the day.

The local papers did not report the incident. The accident occurred during Valley Fair days and the newspapers were busy promoting activities associated with the Fair. There was one article which reported on the reservoir project that week but it focused on the possible number of fire hydrants that could be installed throughout town once the water project was completed.

As we conduct research in our archives we find this is sometimes the case. Uncomfortable stories about things that happened in town were not always reported in local papers. Instead, we find the stories in papers from places like Keene, Rutland, Springfield and St. Albans.

This week we remember Dorr Sprague and Edward Bloxsom. Two stories brought to light because family members wanted them to be remembered.