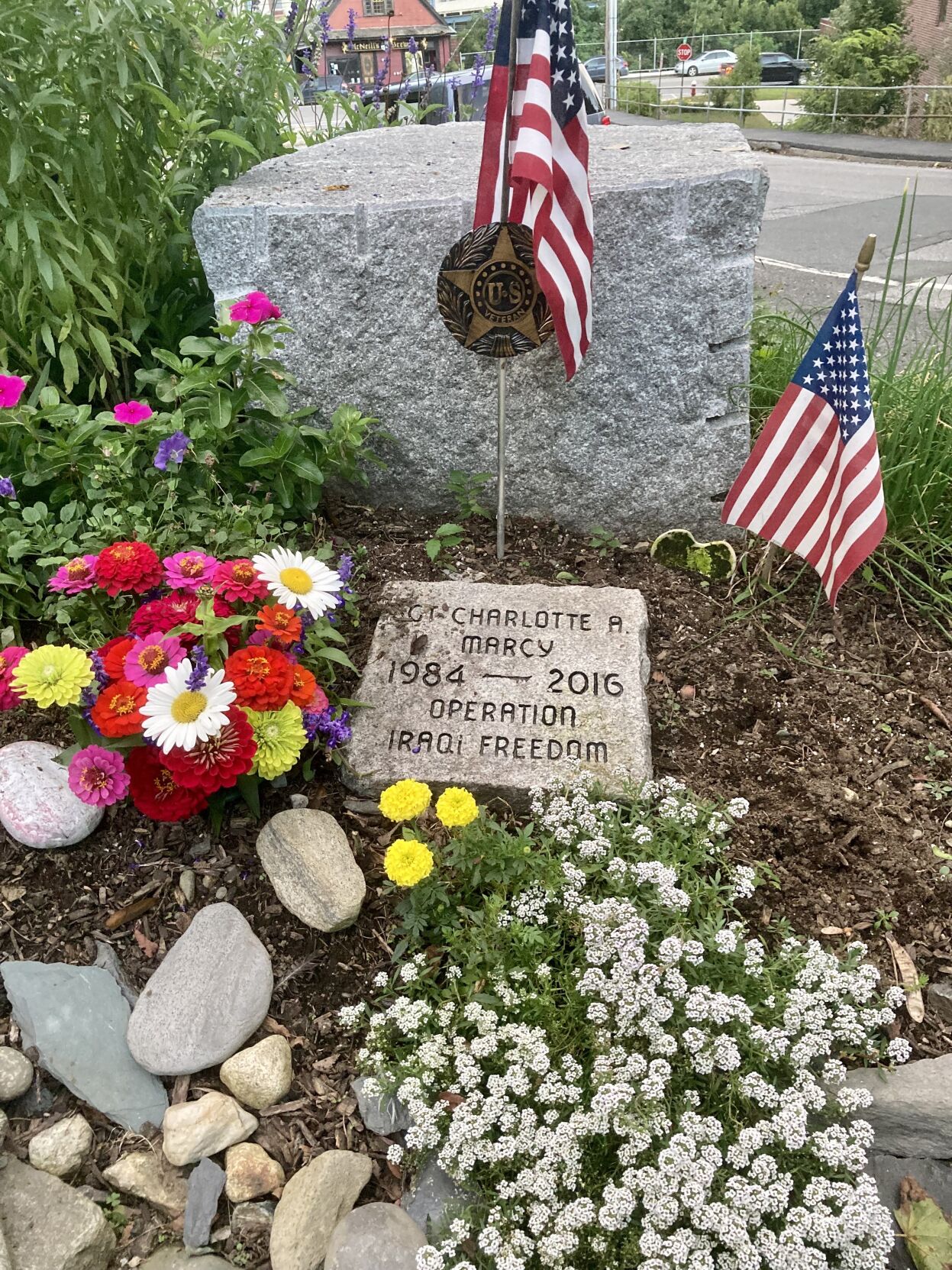 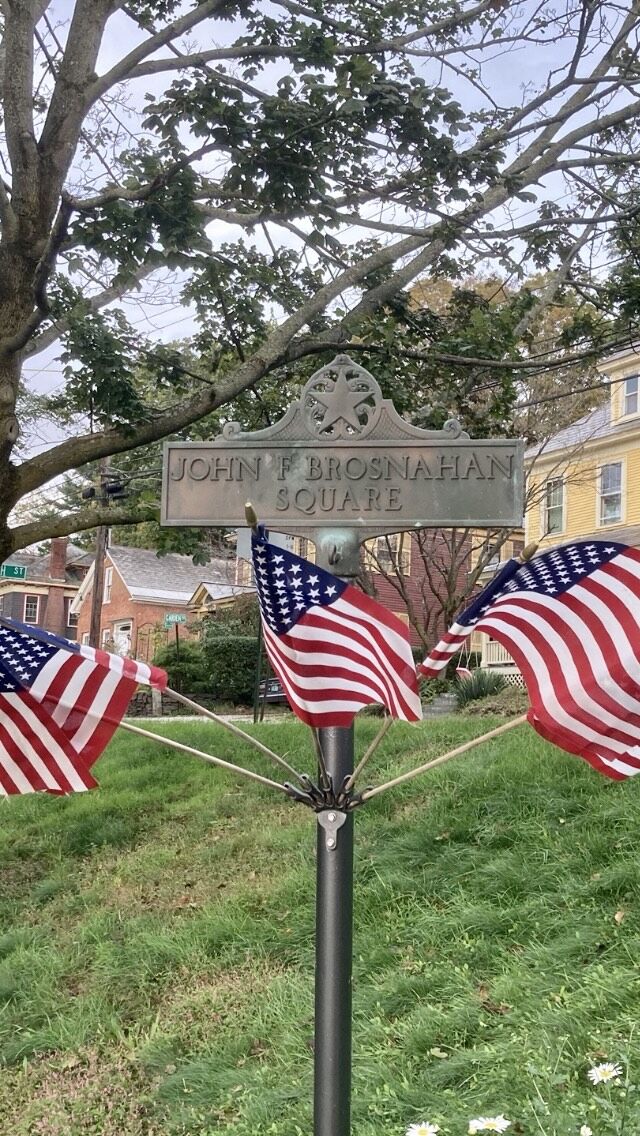 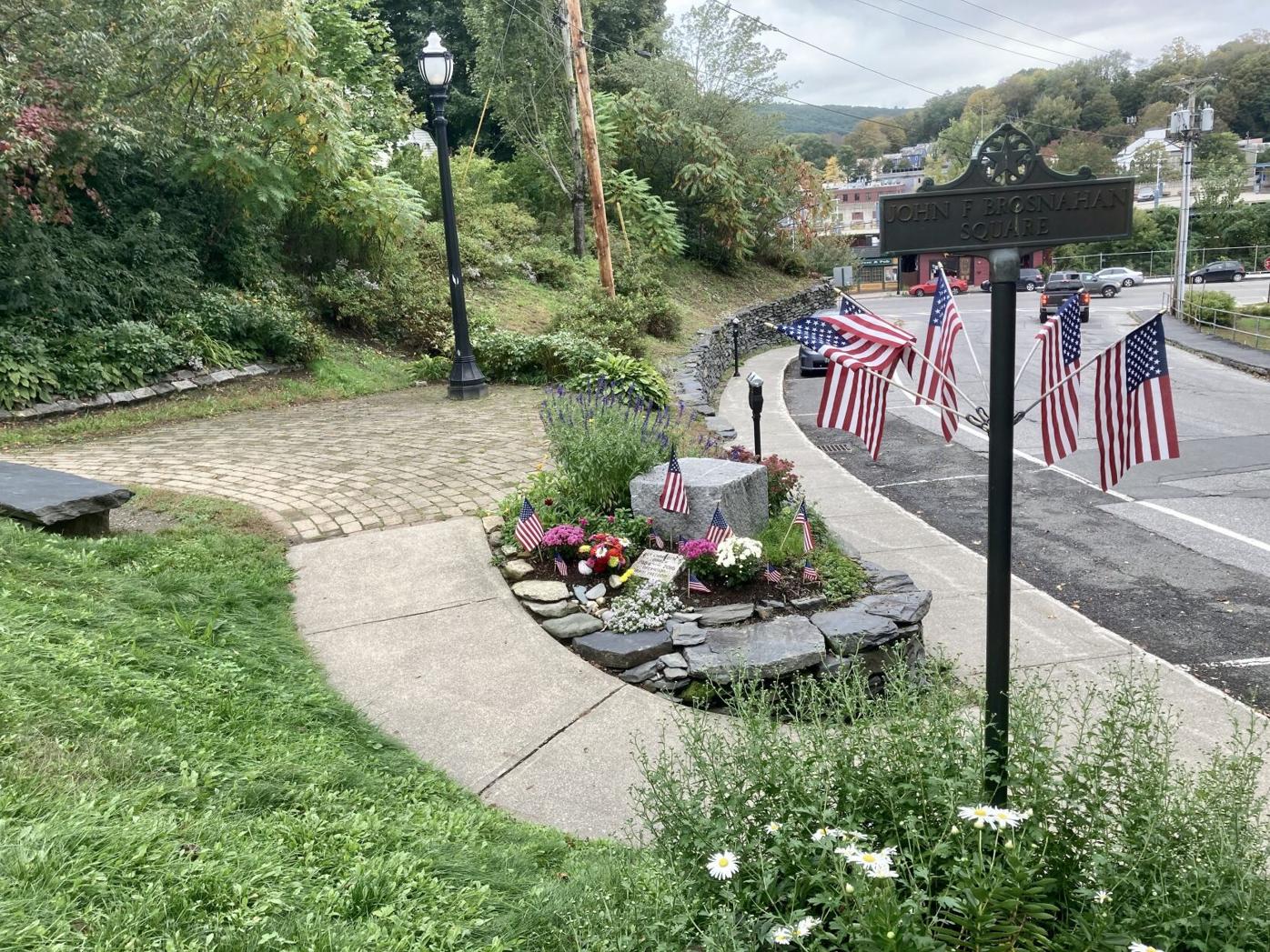 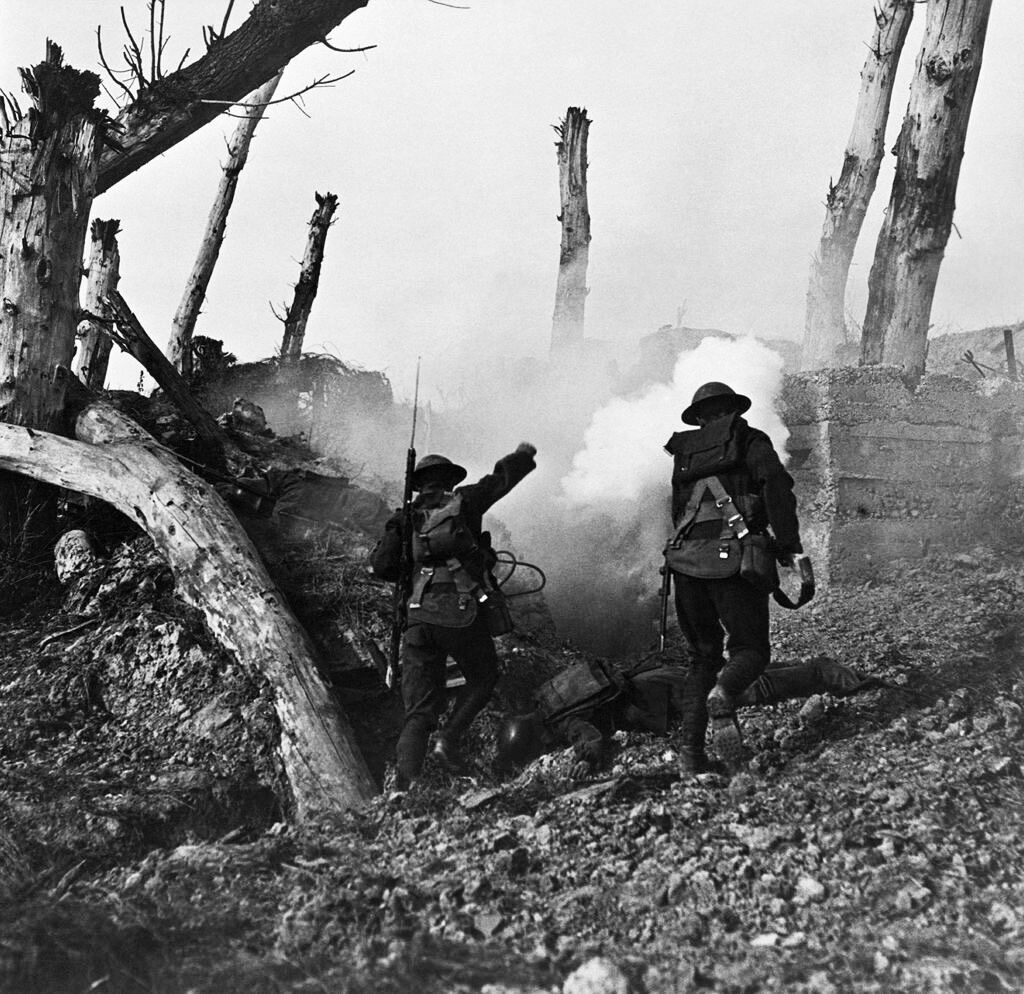 BRATTLEBORO — In November 1935, as part of an Armistice Day Remembrance, there was an American Legion ceremony at the corner of Green and Church streets to honor the memory of Private John Brosnahan. He had been killed in action during World War I when his division launched an offensive against the Germans along the Vesle (pronounced Vel) River in France. According to the letter his mother received from Brosnahan’s commanding officer, John was killed by an enemy shell explosion on the morning of August 19, 1918. He had been serving overseas for four months. A bronze marker declaring the corner “John F. Brosnahan Square” was unveiled at the Armistice Day ceremony. The high school band played and approximately 300 people attended the dedication of the Square.

John Brosnahan grew up in town and lived on Beech Street. While in high school he played football and worked at Fenton’s Clothing Store on Main Street. After graduating he attended Albany Business College and became a bookkeeper. He was working at an Altman Department Store in New York when the draft notice arrived.

John’s mother was notified by mail of her son’s death more than a month after he was killed in battle. He was buried in an American military cemetery in France. Here in Brattleboro a well-attended requiem military mass was sung by the Rev. James Rand at St. Michael’s Roman Catholic Church for Private John F. Brosnahan.

The Square was dedicated in 1935 and continued as an open space into this century. After more than 70 years had passed the bronze marker declaring the area “John F. Brosnahan Square” was no longer on display. No one is sure if the marker had been knocked over by a snow plow, tipped over from bank erosion, or fallen from some other cause.

To determine ownership of the collapsed retaining wall property, Director of Public Works Steve Barrett researched the history of the area and came upon the story of the 1935 dedication of Brosnahan Square. In 2007 the town budget ended with a large surplus and the town voted to set aside money for the rebuilding of the Church Street retaining wall. In 2008 Zaluzny Excavating and Welch Masonry were hired to rebuild the wall and hardscape Brosnahan Square. The Brosnahan Square marker had been discovered in storage and was incorporated into the new construction.

During the Square’s rebuilding process new drainage was established, a new LED street-light was installed, two stone benches were introduced, a granite block anchored the paved walkway, and the Brosnahan bronze marker was placed back in the Square.

In 2009 Steve Barrett approached the Brattleboro Garden Club and asked if they would be interested in establishing plantings at the Square that might soften the look and make the park more attractive. The Garden Club has been continuously planting and maintaining flowers at the site ever since.

In 2013 Floral Gates Nursery donated peonies to the project and Jil MacMenamin of the Garden Club reached out to the Brattleboro Area Drop In Center seeking volunteers to help establish the new plantings. Charlotte Marcy had recently returned from serving two combat tours in Iraq and was volunteering at the Drop In Center’s emergency overflow shelter. Charlotte had been a past member of Jil’s 4-H Club and eagerly joined the project. For the next two summers Charlotte helped amend the soil, plant, and weed perennials in the Square.

CHARLOTTE MARCYCharlotte Marcy was born in Brattleboro in 1984. She grew up in Guilford with her mother Therese, her father Michael and her brother Paul, who was two years older.

Charlotte was an animal lover to the core, she adored animals of all shapes and sizes but her real love was horses. She learned how to groom horses and do many barn chores in exchange for riding lessons and the opportunity to compete in horse shows. At the age of 15, with the money she earned caring for horses and various pets, she was able to purchase her first horse, Jupiter.

Charlotte was full of spunk and adventure. One time when she was 16, she rode her horse to Brattleboro Union High School and placed an order at the Burger King drive-thru window while still on her horse. Originally Charlotte wished to go into law enforcement and enrolled in the Career Center program. She strived for fairness and wanted to help others while serving her community.

In 2002 Charlotte joined the Vermont Army National Guard. In 2005 she was deployed to Iraq. On Charlotte’s first tour she was part of the military police. She was supposed to tour with the Vermont Army National Guard but was 3 pounds under the minimum weight and had to wait a year before being deployed as a replacement soldier with Arizona National Guard’s 860th Military Police Company. She was only in Iraq for a week when the vehicle she was in was hit by a roadside bomb. Charlotte sustained traumatic brain and spinal injuries but remained in Iraq until the end of her deployment. Despite her injuries she returned to her unit within a week of the explosion.

In 2006 Charlotte was deployed to Iraq again. She remained in action until 2008. She worked really hard and within two years she was promoted through the ranks to sergeant.

Charlotte came home from her second tour and with her military savings she bought land in Guilford. With the help of her friends and family she built a house. However, Charlotte didn’t come home from Iraq unscathed, she suffered from PTSD and the brain and spinal injuries that never really healed from her first tour.

Charlotte tried to pursue a career in law enforcement again and got a degree from the Community College of Vermont. She attempted to continue her education at Keene State College but focusing on the work became a struggle. She tried to stay in the Vermont Guard, but the chronic back pain coupled with her brain injury and PTSD made it impossible to continue. She retired from the Guard in 2013. And so, Charlotte spent a lot of her time volunteering, she wanted to be able to help people in need.

She volunteered at Brosnaham Square, making sure the veterans that fell before her still had a nice place to be remembered. She also spent a lot of time at the Drop In Center working for the overflow shelter. Her back pain and PTSD meant she didn’t sleep much so she volunteered for the 1 to 7 a.m. shift, making sure people had tents and blankets to get through the night.

Charlotte also continued to spend a lot of time with horses; she owned two horses of her own and was also involved in therapeutic riding. Charlotte lived in constant pain and had been prescribed morphine by her VA doctor. Her doctor was attempting to transition her to another pain medication when she suffered a life threatening heat stroke while showing her horse at the Guilford Fair.

She was airlifted to Dartmouth Hospital but a lack of oxygen to her brain caused real physical changes. The stroke worsened her previous injuries and additionally compromised her speech and mobility. During the next two years Charlotte was in various recovery settings for 21 months. Most of that time was spent in and out of hospitals. Near the end, she was essentially confined to a wheelchair.

Charlotte died by suicide on September 30, 2016 at the age of 32. She fought two years against the struggles of her physical limitations and pain. Suicide rates among veterans and active service members continue to challenge our society. Last week US Secretary of Defense Lloyd Austin said, “We must redouble our efforts to provide all of our people with the care and the resources they need, to reduce stigmas and barriers to care, and to ensure that our community uses simple safety measures and precautions to reduce the risk of future tragedies.”

Brosnahan Square continues to provide Charlotte’s family with a comfortable place to tend flowers and remember their loved one. A cobblestone engraved with Charlotte’s name can be found at the Square surrounded by flowers maintained by her mother and the Brattleboro Garden Club.

This article was written with the help of many people. Jil MacMenamin, Steve Barrett, Sam Kuusinen, Bill Holiday, Peter Welch, Therese Marcy and BAMS students provided information and research for the article.