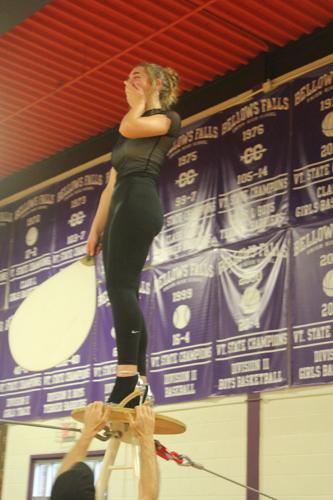 Emotions run wild post-walk when Ariana Wunderle realizes what she has done. 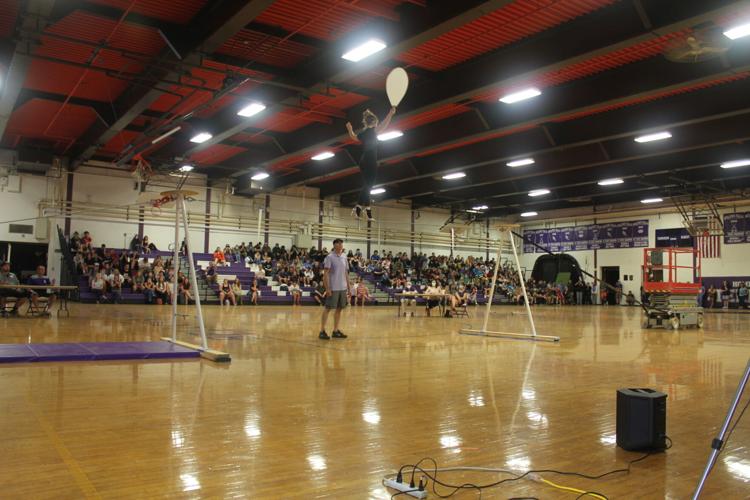 Ariana Wunderle set a world record in high-heeled tightrope walking in front of BFUHS students, faculty, timekeepers and other witnesses on May 16. 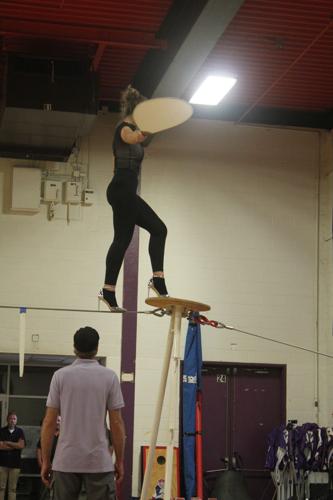 Emotions run wild post-walk when Ariana Wunderle realizes what she has done.

Ariana Wunderle set a world record in high-heeled tightrope walking in front of BFUHS students, faculty, timekeepers and other witnesses on May 16.

WESTMINSTER — Ariana Wunderle comes from a circus family so it was a natural that she chose a circus tightrope walk — in four-inch stilettos no less — for her senior year project.

Wunderle, 18, a senior at Bellows Falls Union High School, is awaiting official confirmation that she broke the Guinness world record on Monday for farthest tightrope walk in high heels, on a rope that is only as wide as a pinky finger.

Wunderle, who is from Rockingham, has been performing with Vermont’s own Circus Smirkus of Greensboro since she was only 2 years old. As a senior, this was going to be the last season for her to perform under its big top, so she wanted to give back as part of her senior project.

Wunderle has been “dancing on the wire” since the age of 7 and she wanted to pay tribute to where she learned the love of wire and where she discovered her own individuality by performing with Circus Smirkus.

“This was the only Guinness record I was thinking of attempting,” she said this week. “I was born into a circus family and I have performed with the non-profit organization, Circus Smirkus, every summer of my life. My first appearance at the circus ring was at age 2.

“Previous to age 7, the circus disciplines I participated in were out of a fascination watching my sister or other circus performers,” she said, referring to her sister Emily, another BFUHS grad.

Wunderle said during the summer of 2011 she started wire walking.

“Wire walking is not a super common circus discipline so when I was being introduced to the circus, I wasn’t really aware that it was an option. I had witnessed the traditional high wire balancing acts in bigger circuses like in Ringling Brothers and Barnum and Bailey, but Circus Smirkus introduced me to a type of wire walking that I would fall in love with,” she said in an interview after her performance on Monday, in front of a school after-hours audience.

“This form of wire walking was more like ‘dancing’ on the wire and I felt that it provided a greater opportunity for expression. At 7 years old, I walked up to the wire coach at Circus Smirkus and asked if I could be taught how to wire walk. I spent hours upon hours just drilling the basics. And while at the time all I wanted was to try the crazy tricks that the older wire walkers were completing, I now know that I would not have become a successful wire walker if I hadn’t spent so much time focused on the basics.”

The next summer, 2012, when she was 8 years old, she was cast in her first ever wire walking act.

“From this moment, my love for the tightrope grew and it became my main circus discipline. My dad (Big Top Adventures’ Troy Wunderle) has always wanted to break a world record and one day we had been looking at world records together with the idea of breaking them together as father and daughter,” she said.

“During this time my dad was working at a school participating in his circus residency through his business. One of the students discovered the world record for the farthest high heel walk on wire and this is how I was introduced to it,” she said.

“The previous summer I had learned how to walk high heels on wire because I had always been fascinated by this feat and after being introduced to this world record, I knew that I would one day beat it. Unfortunately, when I first tried for the record, I was too young to apply and so I had to wait.

“Through my senior project I would be able to invite the school community to come watch and support me, which was important to me. I also used this as an opportunity to create a fundraiser for Circus Smirkus in an attempt to give back to the community which initiated my love for circus and the wire.”

Each senior at BFUHS has to come up with a senior project that gives something back to the community, and Wunderle said she thought it a perfect pairing.

The world record for the farthest tightrope walk in high heels before her attempt was 49.213 feet on a tightrope, 6.56 feet off the ground, and 16.4 feet long, in four-inch high heels.

On Monday afternoon in the high school gym, in front of her family, BFUHS students and faculty, Wunderle set a big record: 639 feet, 8.5 inches, with her tightrope higher, 6 feet, 8.75 inches tall, and 19 feet long.

She only needed four passes on her wire to break the world record, and instead she made 52 passes on the wire, which is about as thick as a pinkie finger, she said. In all, the tight-rope act took 55 minutes.

To allow some room to turn, Wunderle had two ribbons of tape hanging that were 12 feet apart.

After an official 55 minutes that was marked by timekeepers, she ended up walking a distance of 639 feet and 8.5 inches.

Although the record is not official until all the evidence is submitted to Guinness, she met her goal of beating the record as well as the donations made to Smirkus.

Once Guinness receives the materials it can take up to 12 weeks to have them review and certify her record attempt.

Once her attempt is certified, Wunderle plans on framing her glittery four-inch stilettos.

After graduation next month, Wunderle plans to attend Ithaca College in Ithaca, N.Y., and enroll in the exploratory program.

“The circus has been my life up until this point,” she said. The program at Ithaca will help her find her next calling, she said.

Or, if the circus still calls, there’s always Circus Culture, a local circus, in downtown Ithaca, she said.

She said the key is to become so comfortable with balancing that you no longer have to focus on it.

“Learning to walk ‘with’ the wire instead of ‘on’ the wire is so important. You may be able to balance, walk and turn on the wire, but until you realize that the wire is an extension of you, not your manipulation of an object, you will be unable to ‘dance’ on the wire,” she said.