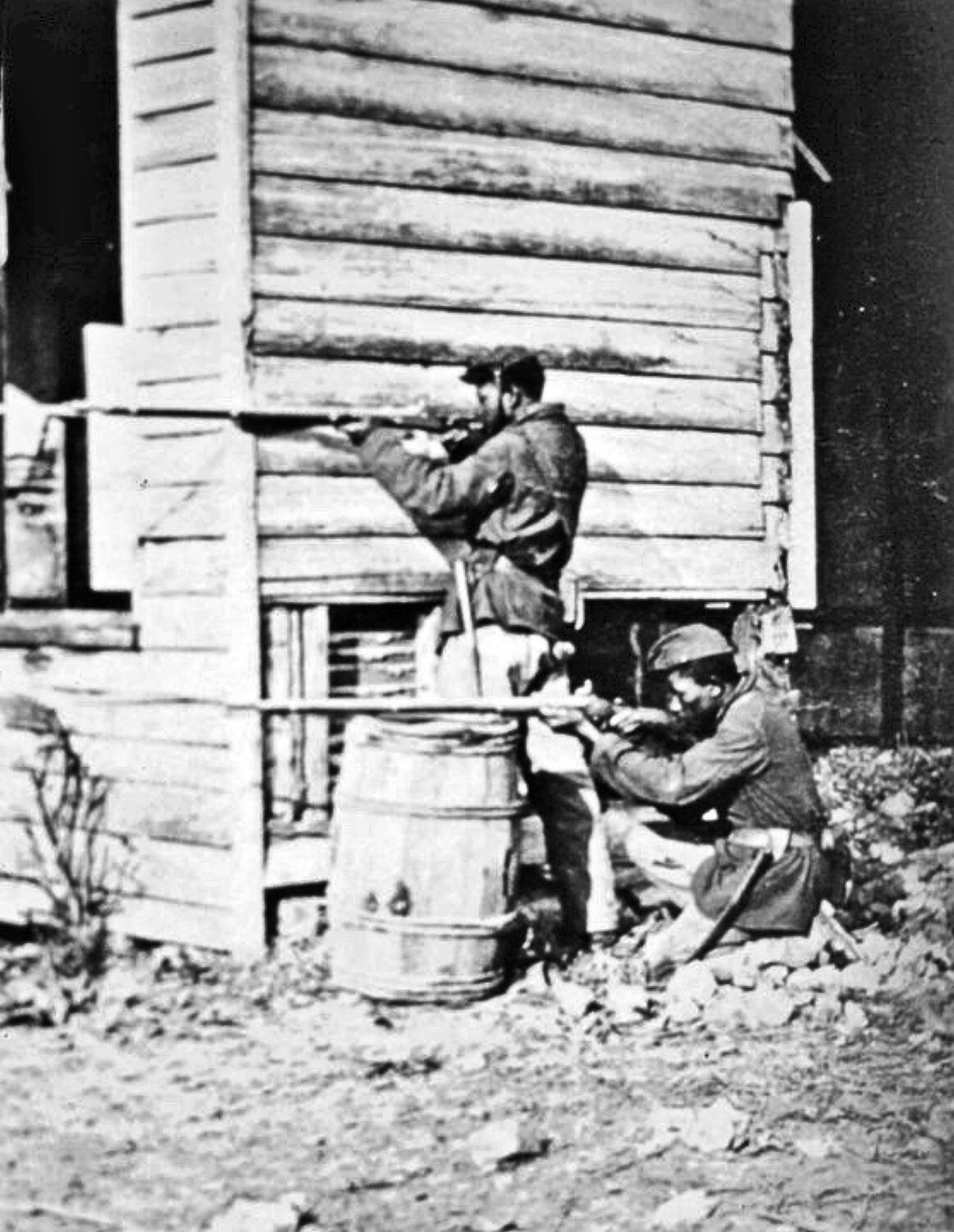 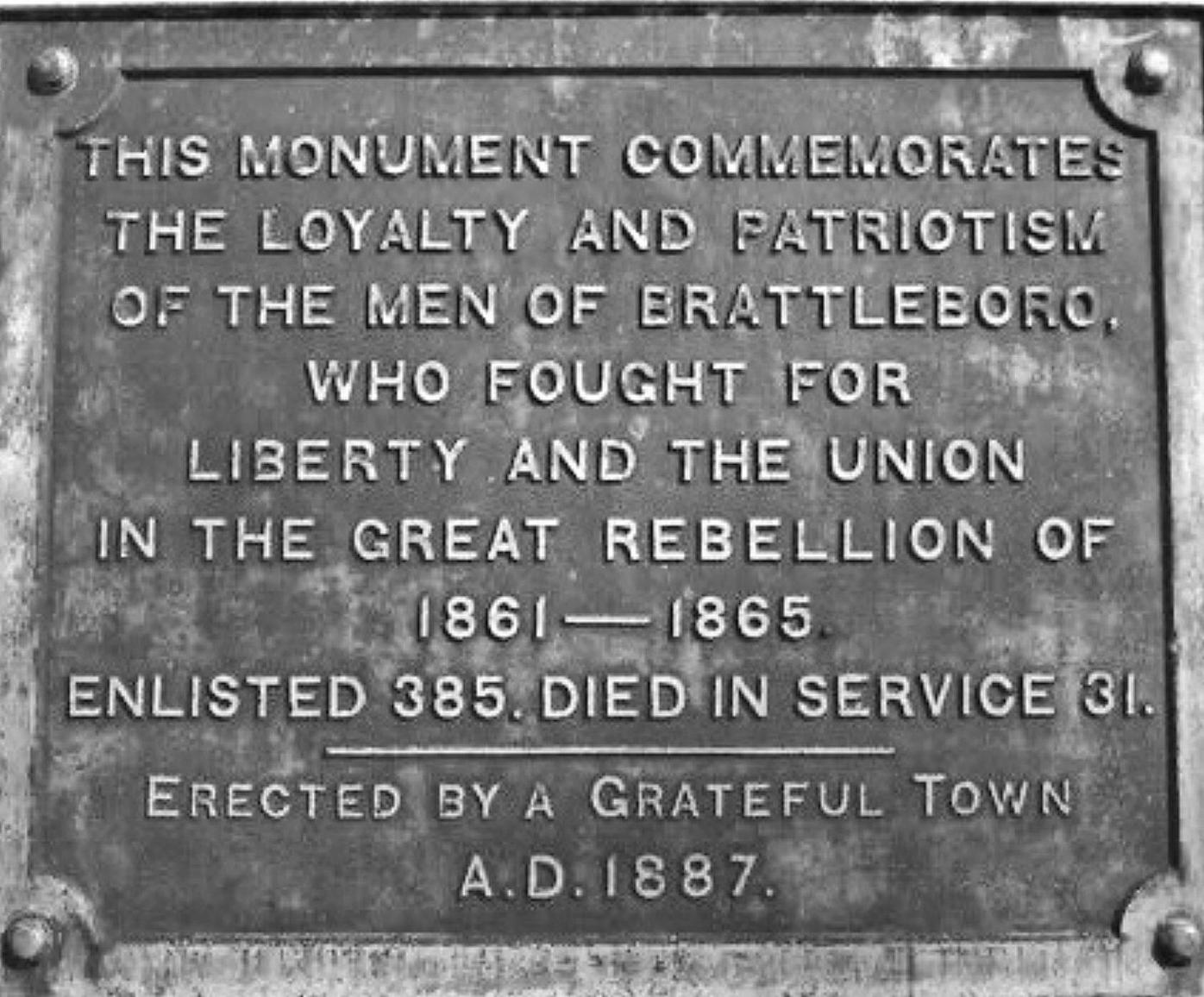 The numbers on the Soldiers' Monument at the Brattleboro Common do not reflect African Americans who served during the Civil War. 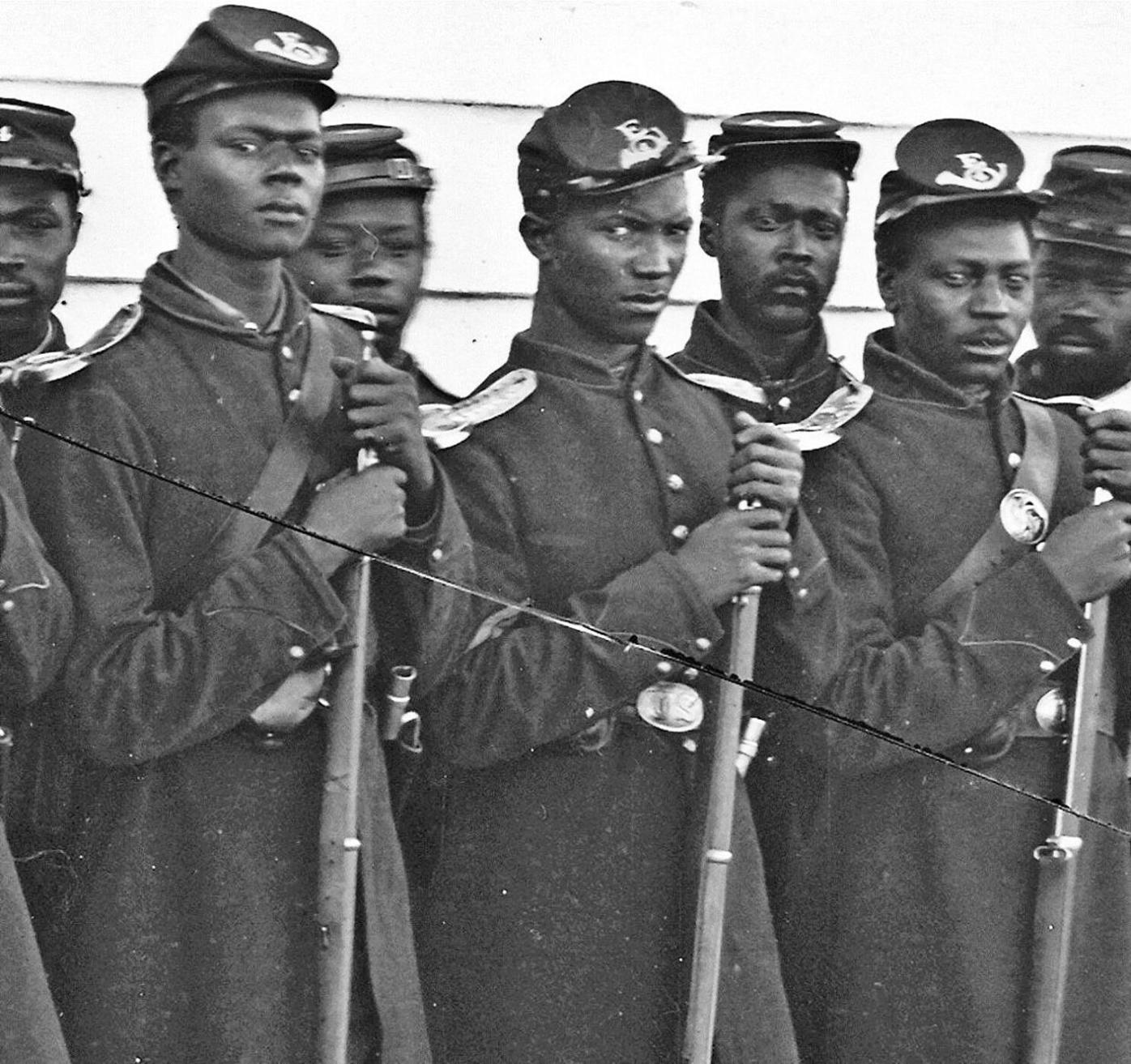 The numbers on the Soldiers' Monument at the Brattleboro Common do not reflect African Americans who served during the Civil War.

A plaque attached to the granite monument states, "This monument commemorates the loyalty and patriotism of the men of Brattleboro, who fought for liberty and the union in the great rebellion of 1861-1865. Enlisted 385. Died in service 31. Erected by a grateful town A.D. 1887."

The year 2015 marked the 150th anniversary of the end of the Civil War and a question had been raised as to whether the numbers of "enlisted" and "died" on the monument were accurate. In 1886, when plans for the monument were first discussed, it was reported that some community members desired to have all of the soldiers' names listed. However, after much discussion, this idea was dropped in favor of collecting and commemorating the total number of those who had served and died during the conflict. Apparently there was fear that some soldiers might mistakenly be omitted from the list.

This fear proved to be justified. In 1892, five years after the monument was erected, the state of Vermont compiled a revised roster of those Vermont men who served in the Army and Navy during the War of the Rebellion. This list was more comprehensive than the one collected locally for the Brattleboro monument. Additional data ballooned the number of soldiers credited to Brattleboro to about 425. It also increased the number of soldiers who died in service to 32.

While looking at the 1892 data, BAMS students realized that not all of the soldiers who enlisted here were included in the reports. This caused us to look more deeply into the question of who served in the military for Brattleboro. Were African Americans part of the mix? Were they included in the Civil War Soldiers' Monument totals?

The land where BAMS, Brattleboro Union High School, the Windham Regional Career Center and the Town Garage are presently located was a military camp during the Civil War. Approximately one-third of all Vermonters who served during the Civil War mustered into service in Brattleboro and were assigned to regiments while at the camp. However, African Americans did not serve in Vermont regiments. Instead, African Americans who mustered into service at Brattleboro were sent by train to serve in United States Colored Troop regiments out of Massachusetts.

It's a challenge to locate accurate information about something that happened over 150 years ago, especially if what you're researching is not part of the dominant narrative already established by others. Various BAMS students have spent a few years on this project and have found that at least five African Americans enlisted at Brattleboro and were credited to this community. To create a list of African American soldiers with connections to Brattleboro we used many resources and relied heavily on the website vermontcivilwar.org and the book, "Men of Color, To Arms! Vermont African-Americans in the Civil War."

All of these African-Americans would serve the Union cause. Charles P. Smith was born in Brattleboro in 1842 and enlisted when African Americans were allowed to join the Union Army in 1863. He served in the 20th Massachusetts regiment, USCT. He died while serving at Port Hudson, Louisiana on April 22, 1864.

Isaac Sawyer enlisted in April 1863. He had been working in downtown Brattleboro at the horse stables of one of the hotels. Some reports state he was an escaped slave from Virginia who had been working in town and keeping a low profile to avoid bounty hunters. Shortly after the U.S. War Department created the Bureau of Colored Troops, Sawyer enlisted at the Brattleboro camp. He served in the USCT Massachusetts 54th regiment and settled in Charleston, South Carolina after the war.

Daniel Green came north from Maryland to enlist. His parents were infirmed former slaves who were struggling to find work. Daniel sent his pay home to his parents so they could have money for their basic necessities. However, after nine months of service in the 45th regiment United States Colored Infantry, Daniel's health began to fail and he was discharged from the military in June 1865 due to illness. He returned home and was unable to work because of rheumatism and epilepsy. He died nine years later at the age of 29.

Benjamin Loney enlisted at the same time as Daniel Green in 1864 and served in the 45th Massachusetts regiment. Records indicate he had traveled to Vermont from Virginia and had been living here as an escaped slave. In 1865 he died while in military service in Brownsville, Texas at the age of 20.

In 1864, 20-year-old Hayworth Matthews enlisted at Brattleboro and was sent to the 45th Massachusetts Colored Infantry as well. His enlistment information indicated he was born in Virginia and came north. He survived the war and was discharged from service in November 1865.

In the 1880s, when soldiers' names were collected for the monument, these five African-Americans were not counted towards the total. The Vermont and Federal governments had credited Brattleboro with their service, but the men didn't make the monument list.

Other African-Americans served Brattleboro during the Civil War as well. These were men who came north to Brattleboro and signed to become substitutes for local men who had been drafted but did not want to serve.

By 1863, war fervor had waned and the U.S. Congress enacted a draft to fill dwindling troop numbers. Draft quotas were established for communities. As part of the plan, a draftee could be discharged if he furnished an acceptable substitute, or paid a $300 fee to commute his draft. If a draftee paid the $300 fee he would avoid that call but could be eligible for future drafts. If the draftee provided a substitute and paid a bounty he was exempt from service for the remainder of the war. This policy spawned the phrase, "a rich man's war and a poor man's fight."

Records indicate that at least 18 Brattleboro men paid the $300 fee to the government to avoid serving and another 17 paid the fee and also arranged to have substitutes take their place. Substitutes expected to receive their $300 bounty from the government. Unfortunately, in February 1864, the Rutland Weekly Herald reported that 54 African-Americans at the Brattleboro encampment were sent by train to join the colored regiments in southern New England without receiving their bounty. Substitutes not receiving their bounties was an issue throughout the Union.

This research tells us that the numbers on the Soldiers' Monument at the Common are incorrect. When adding the African-Americans who served for Brattleboro in the Civil War the totals are closer to 450 "enlisted" and 41 "died in service." The plaque states, 385 enlisted and 31 died in service. These are discrepancies that should be remedied.

Over the years many students have helped with this research. We'd like to thank the newest contributors, Priya and Annabelle, for assistance with this article.

The Brattleboro Historical Society is seeking public opinion concerning this issue. Is it time to modify the Civil War Monument on the Brattleboro Common to reflect more accurately what happened during the 1860s? Should there be an additional plaque near the monument including the newer information? Should the current plaque be replaced with more accurate statistics?

At the end of this article is contact information for the Brattleboro Historical Society. We welcome your thoughts.

Letter: Black heroes should be recognized on monument

To the editor: I had hoped by this Memorial Day that we would finally see recognition of local Black veterans of the Civil War up on our monum…