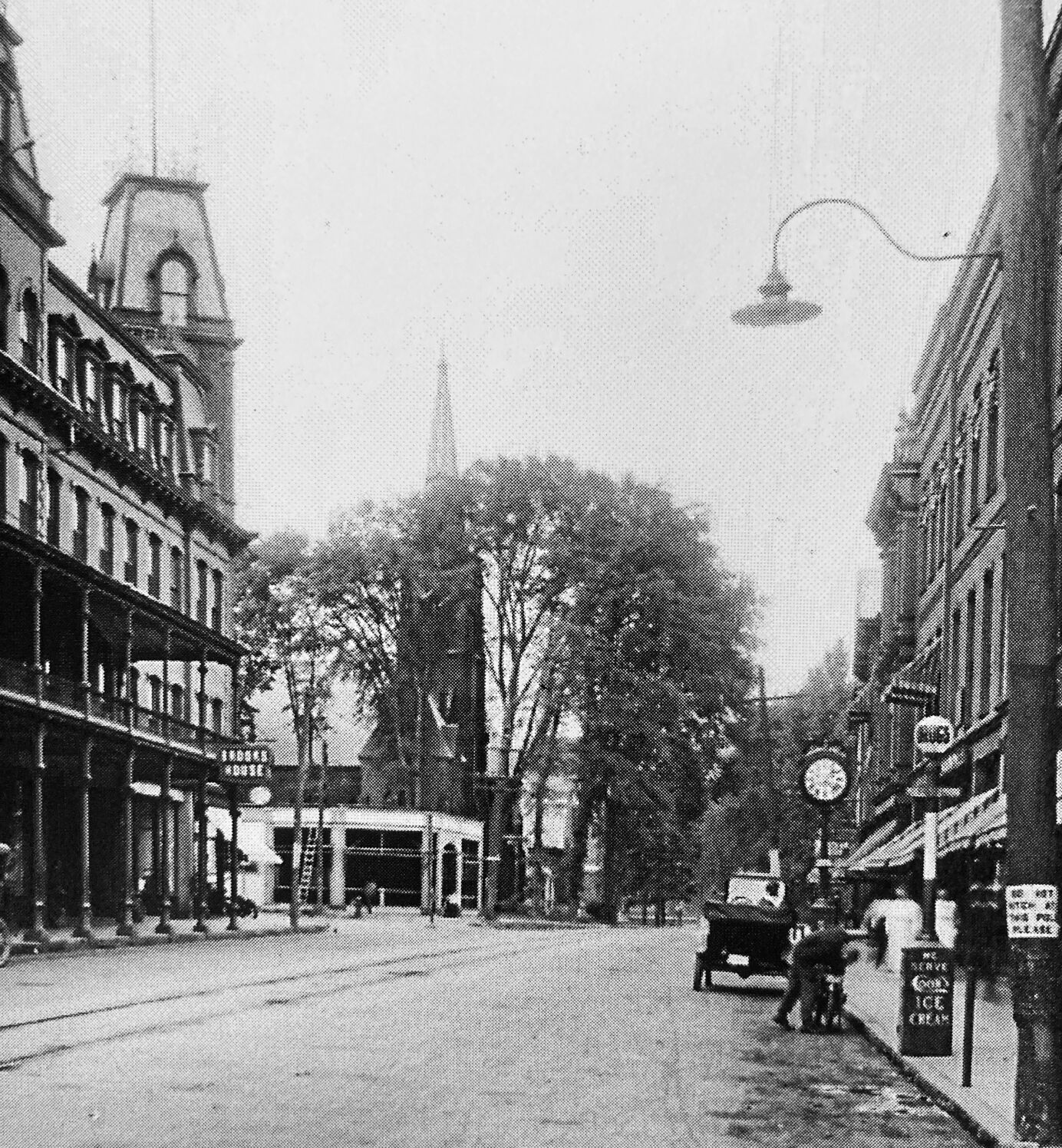 An electric lamp on Main Street in Brattleboro, looking north. 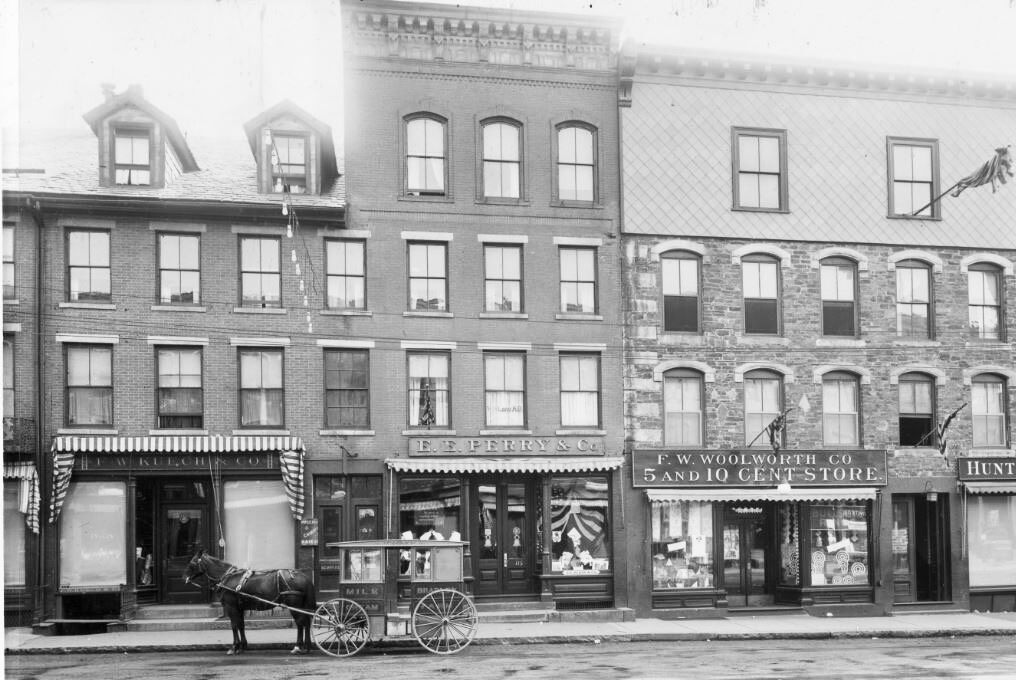 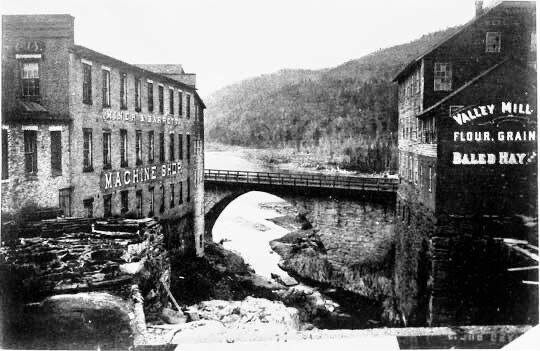 Charles Barrett's Machine Shop on the left, looking towards the Arch Bridge and the confluence of the Whetstone Brook and Connecticut River in Brattleboro.

An electric lamp on Main Street in Brattleboro, looking north.

Charles Barrett's Machine Shop on the left, looking towards the Arch Bridge and the confluence of the Whetstone Brook and Connecticut River in Brattleboro.

BRATTLEBORO — In 1880 Thomas Edison patented the incandescent light bulb and began to set up an electric generating and distribution system in New York City. This business was in its infancy and many mechanically minded people began experimenting with electric power. In the beginning, electricity was used mainly to power lightbulbs. The technology did not support large scale use of electricity to power machinery. Industry was powered by waterwheels and steam engines well into the 1900s.

During the 1880s, artificial light in Brattleboro was mostly created by manufacturing, storing, distributing and burning gas. The Brattleboro Gas Light Company had been operating since 1869. Gas was considered a superior type of lighting over candles and oil lamps because it was piped into buildings and provided an uninterrupted source of fuel. Streets were lit up at night and the gas could also be used for cooking and heating. An underground piping system was created in downtown Brattleboro and ran below street level to homes, commercial buildings and street lamps. The Brattleboro Gas Light Company was located just north of the train station and generated the gas by heating coal in ovens and capturing the gas that was produced. The gas was stored in large tanks that piped the fuel throughout the downtown area.

In December of 1886 the first electric bulbs in Brattleboro were installed by a machinist named Charles Barrett. He had a shop along the Whetstone Brook in the Tyler Block on Main Street and specialized in the manufacture of paper-making machines. Barrett was a tinkerer and enjoyed trying to turn ideas into inventions. For example, he patented a design for roller skates during this time.

Barrett purchased a small electric generating machine from a New York company which could power 20 light bulbs. He lighted his business and also ran electric wire next door to the Reformer newspaper office and lighted their offices as well. Barrett wanted to work in his machine shop even when natural light wasn’t available and he liked the idea of producing his own low maintenance artificial light from electricity instead of paying others to provide higher maintenance gas light.

In the spring of 1887 a proposal was made to the village of Brattleboro by Barrett and others to bring electric light to four street lights as a pilot project to show the community the advantages of electricity. Three of the most powerful businessmen in town — Levi Fuller, Edward Crosby and Charles Thompson — spoke against the electric light experiment. Their large businesses were all powered by coal, gas and steam. They did not see any reason why the village should experiment with electricity. The discussion at the meeting became heated. Smaller shop owners wanted to see if electricity could become part of the power mix in the business district. A voice vote in the village meeting was so close a “division of the house” was called and ballots were cast to determine if the experiment should occur. The secret ballot resulted in the acceptance of the electric light experiment. The bulbs were installed and within a few months there were more than six downtown stores using electricity to light their shops.

George Niles was a local tinkerer and inventor. He became the first “electrician” in the Brattleboro area. Niles worked for Charles Barrett and, when not tinkering with electricity, he kept busy running telephone wires throughout southeastern Vermont. The electric light business was just taking off and Niles designed and built a dynamo which could generate electricity using magnets. General Electric became interested in the device and offered Niles a large sum of money to purchase the machine. Niles refused the offer and continued to provide lights to local businesses and residences. His dynamo could produce electricity to power up to 150 lightbulbs.

Charles Barrett brought electricity to Brattleboro but did not see it as his major business. Barrett saw himself as a machinist who built equipment for industry. For him, electricity was a more efficient way to light his workshops and to provide lighting for neighbors. In 1888 Barrett went into partnership with three other local businessmen to expand his machine shop. The business became known as the Valley Machine Company and specialized in paper machine orders while also repairing machinery from other industries.

Meanwhile, George Niles began to market his own electricity machines. In 1889, while Barrett was moving to Massachusetts, Niles was selling his eight light dynamos that could be used in individual homes and businesses. By 1892 Niles had branched out and was wiring homes and street lights in Wilmington.

The electricity industry was growing rapidly and in 1894 Brattleboro Gas Light Company began competing with individual electricians like George Niles. Niles could set up dynamos to power up to 200 light bulbs at a time but the Gas Light Company used water power from the Whetstone Brook to generate a lot more power. The company powered lights for individual businesses and residences while also creating enough electricity to run the newly established trolley system in town. George Niles found he could not compete with the large business and became an electrician for the trolley company. Within 10 years electricity in Brattleboro went from a small enterprise to one controlled by the most powerful businessmen in town.

Twenty five years after Charles Barrett had introduced electricity into his little machine shop on the Whetstone Brook approximately 60 percent of the businesses in Brattleboro relied on electricity as a power source and the remaining 40 percent were using gas. The Twin State Gas and Electricity Company was providing electricity to the villages of Brattleboro, North Brattleboro, Esteyville, and Centreville. In 1896 the Brattleboro Gas Light Company built its second hydroelectric generating station right next to Barrett’s old machine shop. It became known as the Arch Street Station.

Edward Crosby, who had initially opposed bringing electricity to Brattleboro, became one of the largest local investors in the electric industry. The Brattleboro Gas Light and Electricity Company was acquired by Twin State Gas and Electric Company in 1906. Twin State was a subsidiary of National Light, Heat and Power Company of New York. In 1913 Twin State was purchased by a Chicago-based company that consolidated most of its Vermont companies into Central Vermont Public Service in 1923.

George Nile’s idea of individuals creating their own electricity with machines in their homes and businesses had given way to large scale electricity production that was marketed to the masses and transported many miles over electric transmission lines. In less than 40 years the electric industry went from individual tinkering machinists to gigantic Midwestern power companies controlling access to power in our area.