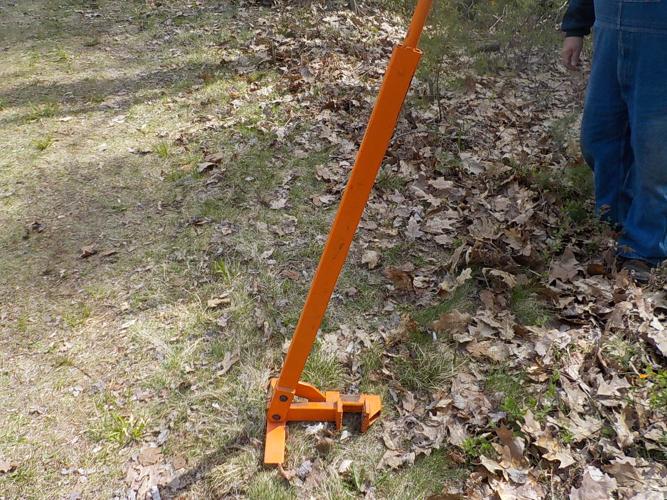 A weed wrench allows anyone to pull out invasive shrubs. 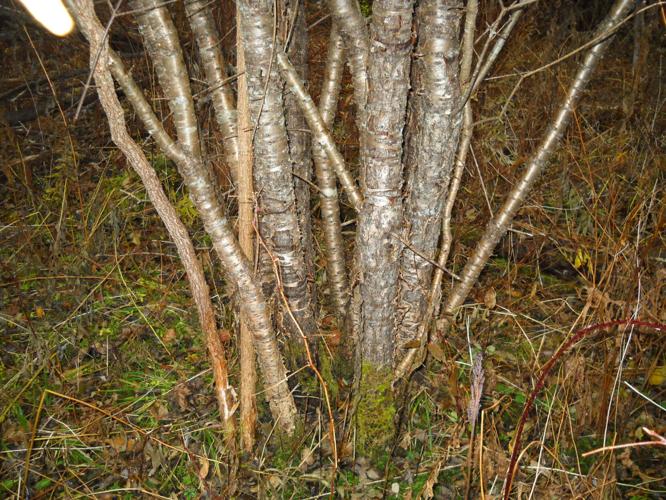 Buckthorn often grows with several stems in a tight grouping. 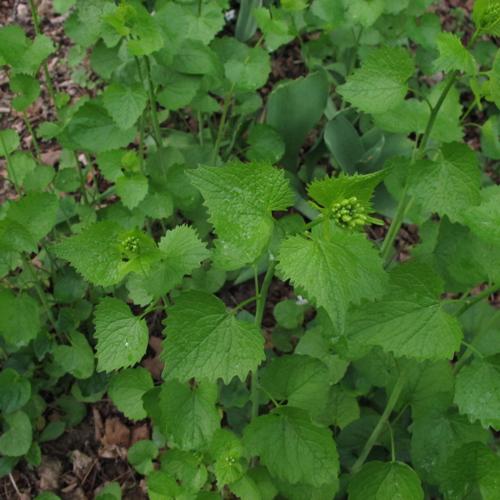 Garlic mustard leaves smell a little like garlic when crushed. 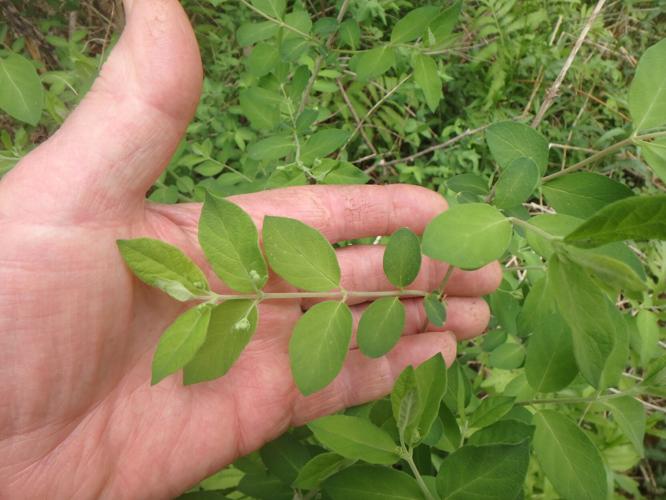 Honeysuckle leaves are oval and opposite each other on the stem. 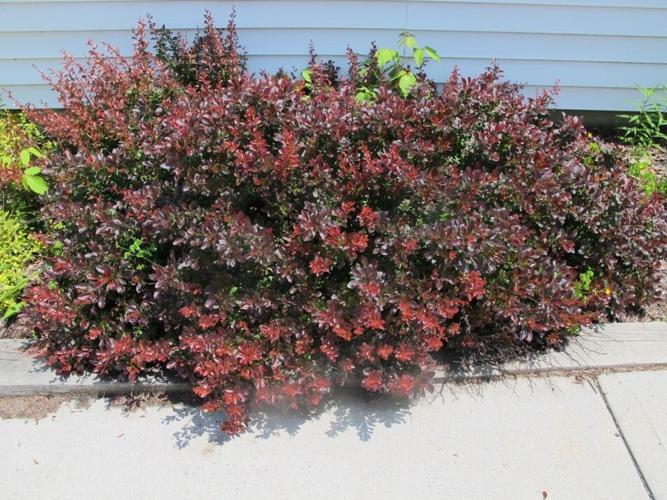 This barberry planted at the post office has red leaves, but most have green ones. All have thorns and red berries in winter.

A weed wrench allows anyone to pull out invasive shrubs.

Buckthorn often grows with several stems in a tight grouping.

Garlic mustard leaves smell a little like garlic when crushed.

Honeysuckle leaves are oval and opposite each other on the stem.

This barberry planted at the post office has red leaves, but most have green ones. All have thorns and red berries in winter.

Well intentioned people of the past century imported many handsome plants. Unfortunately, some of them – absent the predators of their homeland – became pests here in America. These “invasives” generally spread quickly by seed and root, and can take over our gardens and adjoining wild places. Many will grow in sun or shade in wet or dry soil — in other words – anywhere!

This is a good time to work on removing as many invasives as you can. You can obtain the entire list online as each state keeps a list of plants that are considered invasive and are prohibited from sale, propagation or transportation. But let’s look at a few that are common and important to remove, no matter where you live.

For me, those include bush honeysuckle (Lonicera spp.), barberry (Berberis thunbergii) and common buckthorn (Rhamnus cathartica). I recently organized a work day on a hiking trail in Cornish that focused on honeysuckle and barberry. We tried to pull these shrubs by hand, but also used a device called a weed wrench for bigger specimens.

Although weed wrench is used generically, it was in fact a trade name, but the company has gone out of business. Similar tools be found under the name “Pullerbear,” “Uprooter” and perhaps others. I have used Weed Wrenches, but not other brands. These are steel tools with sturdy handles and a gripping mouthpiece that bites onto the stem of a shrub up to 2 or 3 inches in diameter, depending on the model. You pull back, and with great leverage you pull out the culprit, roots and all. Some brands come in different sizes.

Many invasive plants are hard to eradicate because if you leave a part of the root in the ground when pulling it out, it will re-sprout. And simply cutting down an invasive tree or shrub usually will often not work: the roots will send up new shoots, and may respond by sending up many, many new shoots.

But don’t be discouraged if you can’t get all the roots out. You are severely setting back the plant you pulled and it will be several years before the plant can produce seeds for birds to distribute elsewhere.

Buckthorn is one of those that responds to cutting by sending up many new plants. Instead of one buckthorn or a clump of buckthorn, you get dozens of buckthorn. But you can kill buckthorn by girdling the trunk. Take a small pruning saw and cut through the bark all the way around the trunk. Don’t cut into the hardwood, just cut the bark. Then go 12 inches higher up, and do it again.

Girdling a buckthorn is a slow death: you are interrupting the flow of sugars from the leaves to the roots, which slowly starve to death. I have done this in winter, and the tree leafed out and seemed normal that spring and the next spring. The third spring it never leafed out – it was dead, and did not sent up any new sprouts around the tree.

That said, it is not always easy to girdle buckthorn. They often grow with several trunks that merge near the base and grow tightly together. So a folding saw with a pointed tip is the best way to get into the cluster of stems. Or try to cut the clump twice down low, near the base.

During the recent work day in Cornish, I spoke with someone who explained a theory of invasive plant control that made a lot of sense to me. It was a theory proposed by Dr. Steve Dewey of Utah State University, and was based on the way firefighters approach wildfires. When a fire is raging, sometimes all you can do is try to contain it, and look for places where the wind has sent sparks that are just starting a new fire.

Likewise, when there is a bad infestation of an invasive plant like honeysuckle or barberry on a property, look around for spots where a single small plant is growing. It will be easier to pull than a big one. And within a few years, a small plant will be a big plant producing seeds for birds, wind or water to move to a new location – and to produce a big patch. So put out the glowing ember first, then work on the big fire – or infestation – next.

An easy invasive plant to pull is garlic mustard. This is a biennial weedy plant and might not be thought to be so bad. But its roots produce a toxin that kills beneficial soil fungi that will, in time, reduce tree viability. It can grow in deep shade in our forests. The toxin it produces will eliminate the mycorrhizal fungi that live in symbiotic relationship with our trees, gradually weakening the trees – and killing them. Not only that, garlic mustard inhibits the germination of seeds of many species of native plants, including many spring wildflowers.

As a biennial weed, garlic mustard has two forms. In the first year it produces a low rosette of rounded leaves. The second year it sends up 18- to 36-inch flower spikes with pointy, heart-shaped leaves with jagged edges. The small white flowers have 4 petals and bloom in clusters about an inch or more in diameter. One plant can produce about 4,000 seeds. And although about 70 percent of the seeds will germinate the next year, some will remain viable in the soil for up to 10 years.

So organize a work party in your town – it’s more fun than taking on invasives on your own. Try to remove any one of the invasives that threaten our woodlands and wetlands. Your grandkids will thank you one day.

Henry Homeyer can be reached at henry.homeyer@conmcast.net. He is the author of four gardening books.