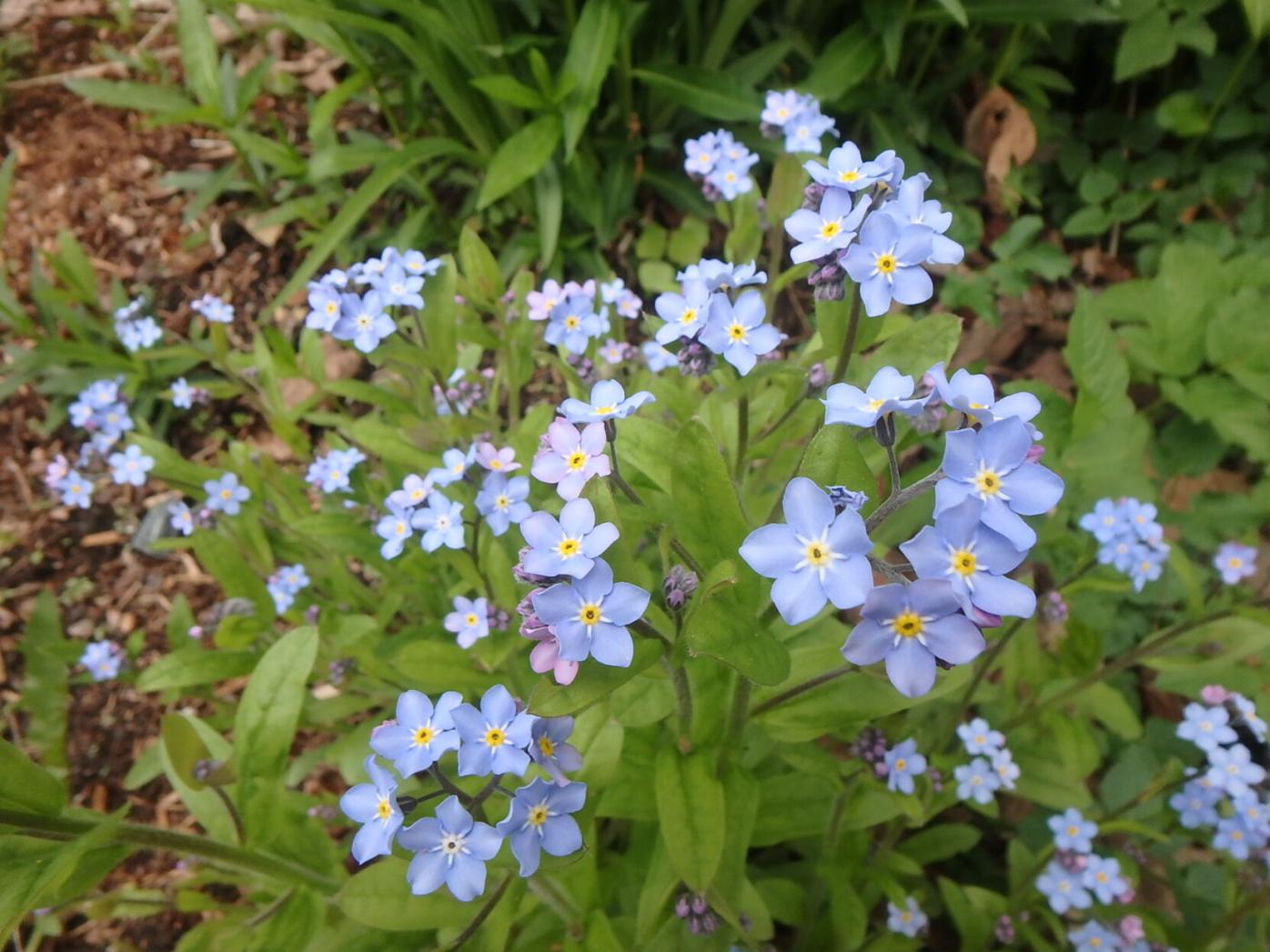 Forget-Me-Not flowers do best in rich, moist soil in either sun or shade, but will bloom in dry shade. 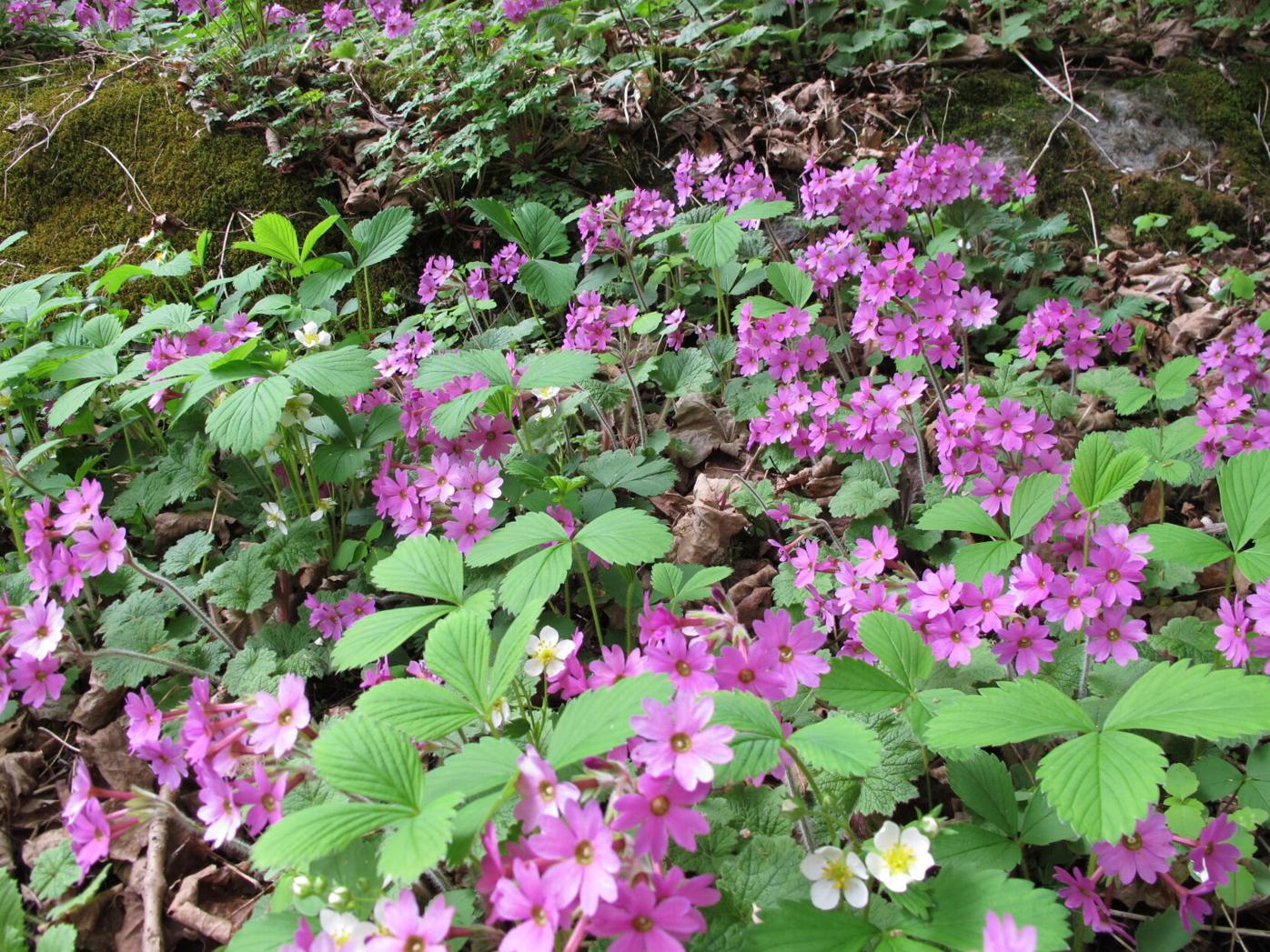 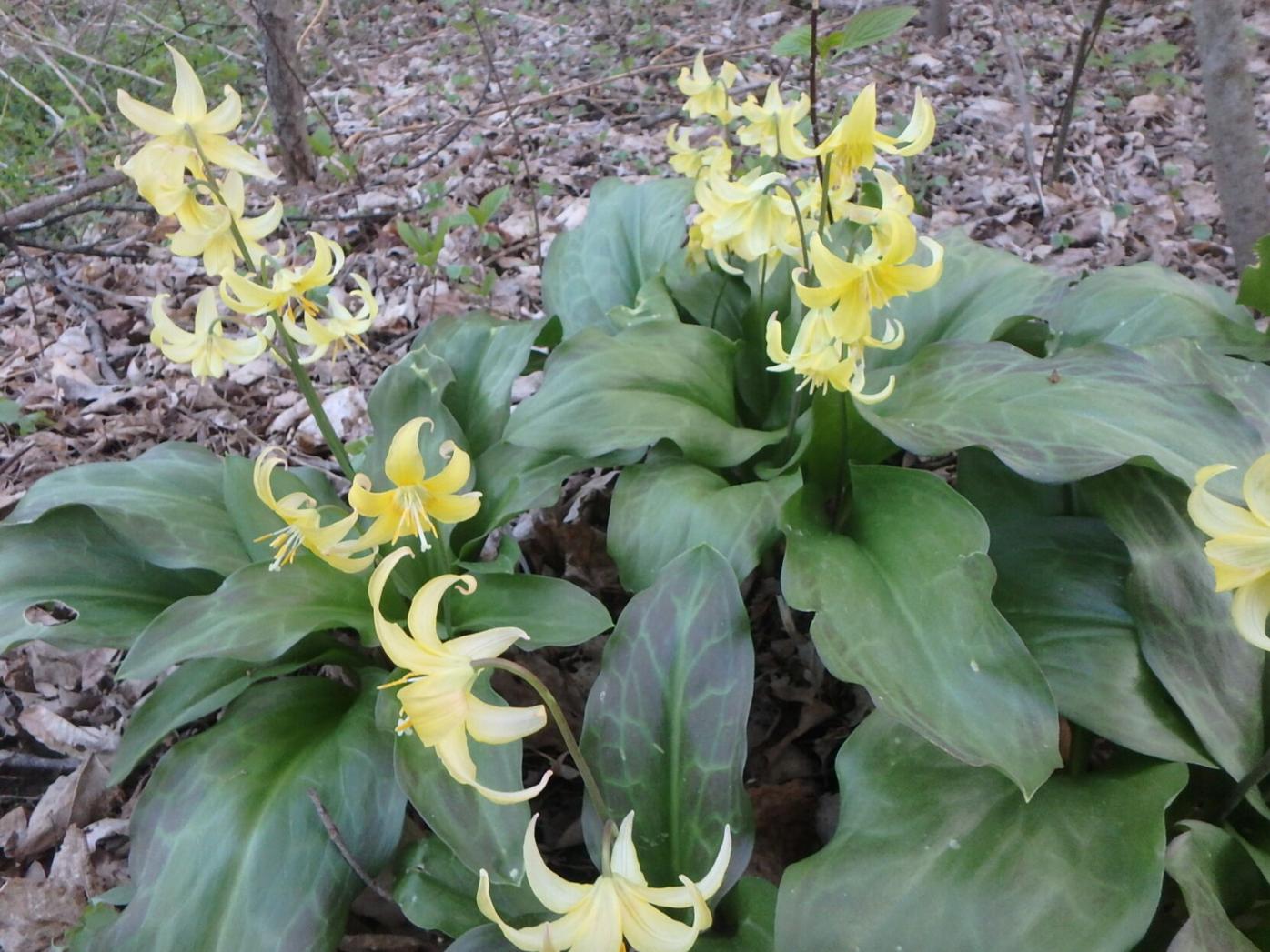 Forget-Me-Not flowers do best in rich, moist soil in either sun or shade, but will bloom in dry shade.

Spring puts a spring in my step, quite literally. I bounce out of the house in the morning to see what is blooming, and since early March I have never been disappointed. You know the regular cast of characters in early spring: first snowdrops with their tiny white blossoms, then glory-of-the-snow in blue, white or pink, and winter aconite in brilliant yellow – all blossoming near ground level. But there are lots of other plants to consider, especially now, in May.

One of my favorites is a wildflower called bloodroot (named for its irritating red sap when the roots are disturbed). It has white blossoms that stay closed at night, or on cold, wet mornings. It has broad light green leaves that can curl around the blossoms like cigars when they first come up. The leaves can serve as a nice groundcover most of the summer.

I also have a double bloodroot. This was given to me by a friend, and it is quite rare. I found it for sale online when writing this, but it is quite expensive. It does not produce viable seed because it is a tetraploid, meaning it has double the number of chromosomes that the ordinary one does. But mine has spread by root over the years, allowing me to dig plants to move to new spots. The blossoms look like miniature double peonies, and it stays in bloom longer than the common one.

I grew up in Connecticut where we had masses of trout lilies (Erythronium americanum) blooming in our hardwood forest. The small yellow lily-like blossoms nod and look down. Here I see plenty of them, but few blossoming. I have learned that only once they have two leaves will they blossom, and mostly I see those with just one leaf.

A few years ago I ordered bulbs from K. Von Bourgondian bulb company for a hybrid Western trout lily that is much bigger than the wild ones. The hybrid Erythronium “Pagoda” has been an amazing success! The leaves are large and each plant produces two to four flowers on each tall stalk. The blossoms are yellow, but much larger than the wild form I grew up with. They are blooming now, but bulbs are shipped in fall.

Lungwort (Pulmonaria spp.) is a perennial flowers that starts blooming very early in the season, and persists for many weeks. Not only that, the leaves are interesting all summer long: they are a nice green and most varieties are decorated with white spots. The flowers on any given plant may be blue, pink or peach. Often a patch will have flowers of all three colors – even appearing on a single plant. It spreads by root, and some gardeners avoid it, thinking it will take over the garden, but I love it.

Corydalis or fumewort is a delicate flower that blooms for me in lavender or yellow, spreading by seed to serve as a groundcover. I have never heard anyone call it fumewort so I invite you to use its scientific name. It does well in shade or part shade, and tolerates moist soils well. The leaves are finely cut, almost fern-like, and each blossom is small and downward looking. Some varieties will re-bloom later in the summer.

Our celandine poppies (Stylophorum diphyllum) are starting to bloom in shady areas now. These are not true poppies, but are in the poppy family. These are native to North America, and do well in shade or part shade, exhibiting bright yellow 1- to 2-inch wide four-petaled flowers. The leaves stand up about 20 inches, and are handsome all summer. Celandine poppies do best in moist, humus-rich soil, but will perform even in dry shade, once established. There is a weedy relative that pops up all over in my garden. Celandine poppies will re-bloom if you cut off the stems after flowering.

One of my favorite early summer flowers is the Forget-Me-Not (Myosotis sylvatica). It is a rambunctious spreader, but pulls easily if it gets where you don’t want it. It stands 6- to 12-inches tall, and has lovely bright blue, upward-looking flowers less than half an inch across, with yellow and white eyes. It does best in rich, moist soil in either sun or shade, but will bloom in dry shade if it has to.

It is not clear to me if Forget-Me-Nots are annuals, biennials or perennials. They self-seed readily, and I generally treat them as annuals. They transplant easily and can serve as a ground cover. But I pull them often to plant other things, and more will show up in the general area the next summer. They even appear along the banks of my brook, where they bloom much of the summer.

I love primroses of all sorts, and my dramatic candelabra primroses (Primula japonica) have their own bed under old apple trees. But they will not bloom until June, so right now I make do with early yellow primroses (Primula eliator) that have been blooming for weeks and show no signs of finishing up their bloom cycle. They stay in tidy clumps.

Now starting to bloom are my Primula kisoana, with lovely pink or magenta- colored flowers. They have no common name, unless you call them, as my wife does, “I wanna kiss-ya”, which is not found in books. The spread vigorously by root in shade, either moist or dry. Probably most vigorous in moist, rich soil, they are polite, going around other plants as they spread, not pushing them out of the way.

Visit your local nursery to see what is in bloom now, or ask your friends for divisions. There are lots of great flowers out there blooming now!

Henry Homeyer is a UNH Master Gardener and the author of four gardening books. He can be reached at henry.homeyer@comcast.net.