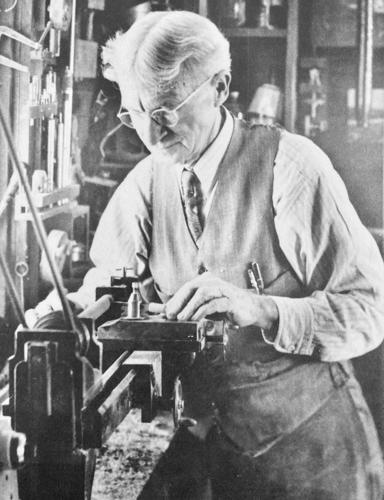 Charles Alvah Smith in his workshop. 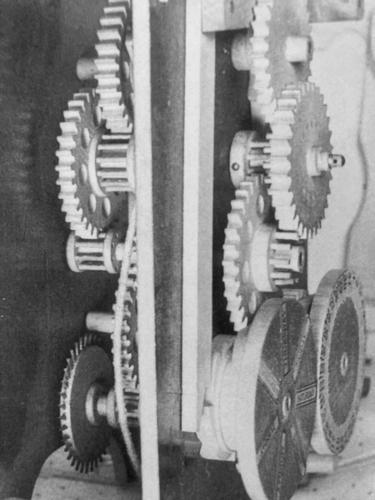 The wooden gears in a Smith timepiece. 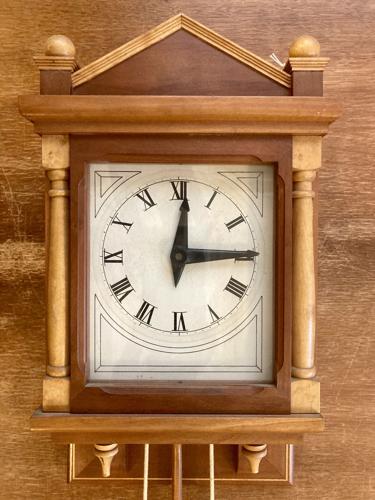 The #318 clock face made by Charles Alvah Smith.

Charles Alvah Smith in his workshop.

The wooden gears in a Smith timepiece.

The #318 clock face made by Charles Alvah Smith.

BRATTLEBORO — When thinking of Charles Alvah Smith words that quickly come to mind are craftsmanship, curiosity and creativity. From 1931 to 1945 Smith handbuilt more than 600 wooden timepieces. Not only were the clock cases and hands made of wood, but the internal mechanisms that kept time were also wooden.

Charles had woodworking in his blood. His father served in the Civil War and, upon his return, began producing wooden sleighs. Smith grew up in the family business. During his teen years the company expanded to Brattleboro and Philadelphia. Smith attended Brattleboro High School and began working at the Philadelphia plant sometime after graduation.

While in Philadelphia he quickly learned how to design machines and oversee the manufacturing of wooden products. There is no record that he attended schooling beyond Brattleboro High School but the formative Philadelphia years gave him the mechanical skills that served him well for the remainder of his life.

Charles remained in Philadelphia until the plant closed in 1889 and the business was reorganized so the next generation — Charles Alvah Smith, his brother, Fred and brother in law, Frank Hunt — could become partners. By this time all of the manufacturing was taking place in the Brattleboro woodworking plant at the corner of Frost and Elm streets. Production focused on wooden sleds, tricycles, wheelbarrows and the famous Shoo-Fly Rocking Horse. Smaller wooden toys like trains, wagons, and carts were also made. There were about 100 employees at the wooden toy factory.

Charles designed many of the machines that were used to create the components of the numerous wooden products made at the factory. In 1899 the building caught fire and was destroyed. Charles designed and oversaw the construction of a new factory. The business continued under the same management until 1903 when the company became a branch of the National Novelty Corporation of New York City. Charles remained with the company until 1920.

The wooden toy business gave way to metal toys so, at the age of 54, Charles began working at the W.E. Stellman Machine Shop on Whetstone Brook. The shop was often hired by companies to help plan and produce machines that would make components for other products. Charles was instrumental in the design of machines that produced parts for the Franklin Motor Car Company. During the 1920s he was given a new Franklin car every year as partial payment for his services. He also did work for the Packard Motor Car Company.

In 1929 the Stellman Machine Shop burned and he retired for good. Charles Alvah Smith was in the woodworking business for 35 years and had spent many of those years designing machines to build wooden products. He didn’t have an engineering degree but still held six patents associated with woodworking or automobiles. For three decades he specialized in efficient production methods.

On a personal level, Charles married Cora Pratt of Brattleboro in 1898. They lived on Canal Street and had one child, a son, but he did not survive early childhood, passing away in 1902. Cora battled a long illness and died in 1917.

Charles never remarried and became a confirmed widower. He converted his garage into a year-round woodworking shop and, after retirement, fashioned small wooden sailboats, trains and inlaid cribbage boards. He even made a xylophone and specialized in wooden accessories for hunters. Charles was an avid woodchuck hunter and rifleman.

In 1946 Charles Alvah Smith’s obituary stated that he was an “artisan of unusual ability.” Mr. Smith won nationwide attention in 1944 when The Saturday Evening Post published an illustrated article about his wooden clock-making hobby. He made over 600 clocks and numbered each one. The Brattleboro Historical Society has clock #318.

He began making clocks in 1931. They were unique in that no two were exactly the same, but they all had similar characteristics. Every timepiece had exposed weights and a pendulum that caused the clock to operate. Every part of the clock’s movements was made of wood. In the beginning he made clocks for friends and relatives. They proved popular and he then began trading them for items he wanted. He would trade for things like lead or gasoline. Eventually he sold the timepieces on consignment and also took orders from around the country.

Charles experimented with different wall case designs. He numbered every clock and kept meticulous records of their construction. He started with a simple rectangle, then by clock #81 he tried a “midget” style. Clock #110 was the first “colonial” style and #209 was the first “courthouse” clock.

During the World War II years his production went up significantly. From 1943 through ‘45 he made at least 100 clocks each year. Before the war he hadn’t made more than 60 clocks in any one year and usually averaged less than 30. It is guessed that there may have been two reasons: 1) clocks with metal movements became scarce as the metal was needed for the war effort, and 2) Charles had more time on his hands because he didn’t have access to rationed gasoline in order to travel for his other favorite pastime, hunting woodchucks.

Charles was frugal. The wood he used for the clocks was scrap wood from Estey Organ Company and the Templeton Furniture Company. Our clock was donated to the historical society by Faith Pepe. It is one of his “colonial courthouse” models. During the first half of his production he experimented with different styles and sizes of clocks. By the time he reached his 300th clock he had settled into building unique wall clocks that sold for $10 to $40 between 1943-1945. He had three basic designs ... a basic rectangular wall clock with little ornamentation, a rectangular clock with scroll features, and a rectangular clock with a courthouse top and colonial pillars

His biographer, John M. Anderson, wrote, “He must have been intellectually gifted. Part of that gift was his mechanical genius, part was his ability to learn and apply what he learned. He was largely self-taught … Somewhere along the line he learned to play the piano and the violin, and played them well ... He did make a xylophone of wooden bars, tuned it carefully, and taught himself how to play. In addition he played the drums for his own pleasure.”

Board member Peter Root brought this story to our attention and much of the information was found in John M. Anderson’s 1989 publication, “Charles Alvah Smith: Vermont Maker of Unusual Clocks.”