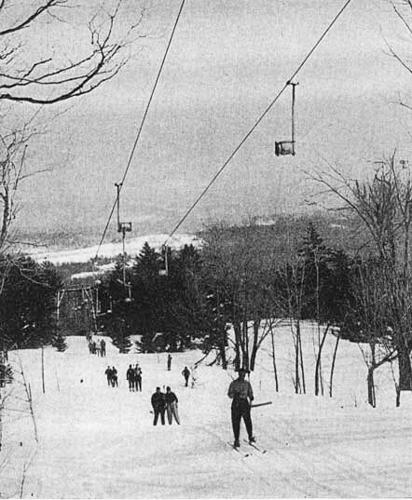 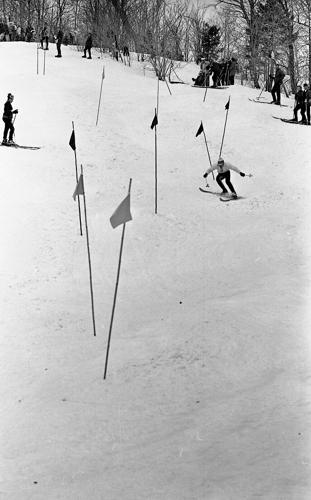 Hogback ski area in Marlboro in the 1960s. 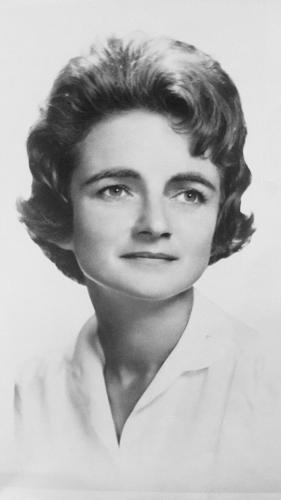 Hogback ski area in Marlboro in the 1960s.

BRATTLEBORO — In 1935 Brattleboro was well-known in the burgeoning New England skiing community. The annual Brattleboro Outing Club ski jump attracted thousands of people to the area every year. New Englanders came to Brattleboro all winter to experience winter sports opportunities.

For example, in January 1935, 700 people arrived on a special “Winter Sports” train originating from New London, Conn. The 13-coach train pulled into the station at noon and the skiing enthusiasts remained until 6 p.m. The Brattleboro Outing Club provided ski jumping and slalom races on the Cedar Street hill for the visitors.

In February 1935 Brattleboro hosted the New England Ski Championships. The events included ski jumping and slalom racing. It was reported that 3,000 paying customers attended the activities. Specially scheduled trains from Connecticut and Massachusetts brought 1,250 of the attendees.

One of the attendees at the Championships was Nancy Reynolds, a student at Bennington College and a skiing enthusiast. She often traveled over the mountain with friends and stayed at Hotel Billings to participate in the outdoor winter activities. The day before the New England Championships she had competed in the Brattleboro Outing Club’s interclub slalom races and come in third. Reynolds belonged to the Outing Club and took skiing lessons from Robert Billings, the son of the owners of Hotel Billings. He was also a graduate of Dartmouth College, a skiing instructor and directed many local meets and national ski tournaments.

After graduating from college in 1937 Nancy Reynolds continued to pursue her skiing interests. First, competing across the United States and then traveling to Europe to compete internationally. In November 1937 the Reformer reported that, “Nancy Reynolds, well known as a skier during her student days at Bennington College, will sail tomorrow from New York on the Queen Mary for a winter’s competition in Europe as a member of the Women’s International Ski Team. Miss Reynolds was formerly a pupil of Robert Billings, local ski instructor.”

Reynolds would go on to earn a spot on the 1940 U.S. Olympic team. However, the onset of World War II meant that the 1940 Winter Olympics scheduled to take place in Japan were cancelled. For two years Nancy was the national amateur women’s champion in both slalom and downhill events. From 1939 to 1941 she set records at competitions all over North America.

After her marriage, Nancy Reynolds Cooke became a ski instructor at the Brattleboro Outing Club from 1944 to 1950. She often had more than 100 students show up for her lessons.

In November 1937 Robert Billings announced that 150 acres of the Clark Farm on Guilford Street had been leased in order to build a ski tow. Billings, along with John Dunham, Elliot Barber and Floyd Messenger planned to use a 20-horsepower electric motor to power an 1,100-foot rope tow at the area where the Brattleboro Outing Club had been hosting skiing lessons under the lights for the past few years. In 20 years this area would become Living Memorial Park.

During the winter of 1937-38 there were three rope tows in town. Besides the Guilford Street Ski Tow, Bruce Sawin and William Mundell leased 15 acres of the Arthur Crooks Farm in West Brattleboro on the north side of Round Mountain to build a 400-foot rope tow powered by a gasoline engine. The Rice Farm on the Dummerston/Brattleboro border also operated a rope tow.

Robert Billings would also oversee a ski tow in Wilmington with his brother. Of the four men who founded the Guilford Street Ski Tow, three of them would serve during World War II. Billings served in the Air Force for four years. After the war he returned to Dartmouth to earn a master’s degree in business administration. Billings remained active in skiing. For many years he was the head of the Brattleboro Outing Club. He was also a director of the Eastern Amateur Ski Association and was certified as a ski instructor by that organization.

Elliot Barber, another founder of the Guilford Street Ski Tow, grew up in town and was a graduate of Harvard Law School. When the ski tow was constructed he had just joined his father’s law firm. During World War II he served in the Army and rose to the rank of captain while deployed in the Asian Theater. Barber would go on to serve in the Vermont House of Representatives and the Senate. In the 1950s he would also serve as Vermont Attorney General.

Floyd Messenger, another founder, grew up watching the annual ski jump and became a jumping enthusiast himself. Messenger competed in the New England region for the Brattleboro Outing Club. He was a member of the Club’s board of directors from 1931 to 1946. During World War II he served as an Army pilot. After the war he offered skiing classes at the Guilford Street Ski Tow. Nancy Reynolds Cooke taught the afternoon ski classes and he taught the evening classes under the lights.

John L. Dunham was the fourth founding member of the Guilford Street Ski Tow. He was the only one to remain in town during World War II. Dunham worked at his family’s shoe company while he championed outdoor sports. In the winters he was a great supporter of skiing and in the summers he was an important sponsor of tennis.

In 1939 Dunham announced the lengthening of the Guilford Street Ski Tow by 400 feet so the run would extend to 1,500 feet. More lighting was also added. An example of continued skiing enthusiasm was reported in the February 1939 Reformer, “the first ‘snow train’ of the season arrived at 7:30 p.m. as 200 visitors from Springfield, Holyoke and Northampton, Massachusetts spent over two hours at the Guilford Street Ski Tow. They were met at the railroad station by several buses and kept their feet in their skis until 10 p.m. The 200 Bay-staters joined 200 local skiers on the slopes. The tow was closed promptly at 10 o’clock to enable them to gather their equipment and return to the station in time to depart on schedule at 10:30. It was an evening well spent, judging by ruddy faces and ready grins.”

Later in the month the paper reported that the town select board had voted to make Guilford Street a one-way road to accommodate the high traffic generated by skiers going to the tow. Traffic would run south from Western Avenue on days when ski trains were expected to arrive.

The ski tow at Round Mountain didn’t operate past 1940. Dunham had opened another ski tow on Bonnyvale Road and it proved to be too competitive. The Guilford Street Tow ran from January 1938 to February 1946. In October 1946 it was announced that the Guilford Street Tow would no longer operate because the Clark family was no longer interested in leasing the land to the ski tow company. Dunham and Messenger remained active in the ski tow business and were looking to expand. They improved equipment on the Bonnyvale ski tow and began to develop a ski tow on Hogback Mountain.

In 1946 John L. Dunham announced a plan to lease land from Harold White on Hogback Mountain, 14 miles west of Brattleboro. A 2,310-foot T bar ski lift was installed near the Mt. Olga fire tower and an 80 horsepower diesel motor powered the lift. Five thousand shares of common stock at $10 a share were sold. Trails were cleared, telephone and public address systems were constructed and a powerhouse, warming hut and first aid station were erected. Dunham estimated that it would cost $50,000 to get the skiing business started. Floyd Messenger served as the treasurer of the corporation and Harold White planned to sell food, clothing and other things needed by skiers in his gift shop on Route 9.

The people who started the Guilford Street Ski Tow in 1937 began Hogback Mountain in 1946 and John L. Dunham kept his hand in the business for the next 30 years. Hogback became a popular family ski resort for people from the local area, and also the city folks from Massachusetts and Connecticut.