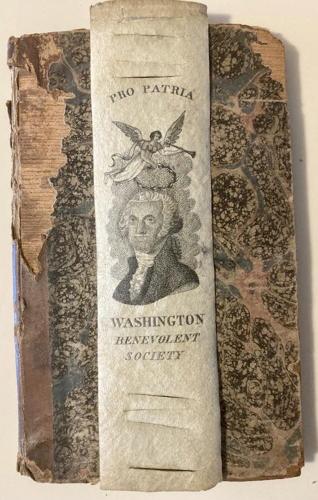 This booklet and ribbon were some of the Washington Benevolent Society artifacts from 1811 that were donated to the Brattleboro Historical Society by descendants of William Whipple. 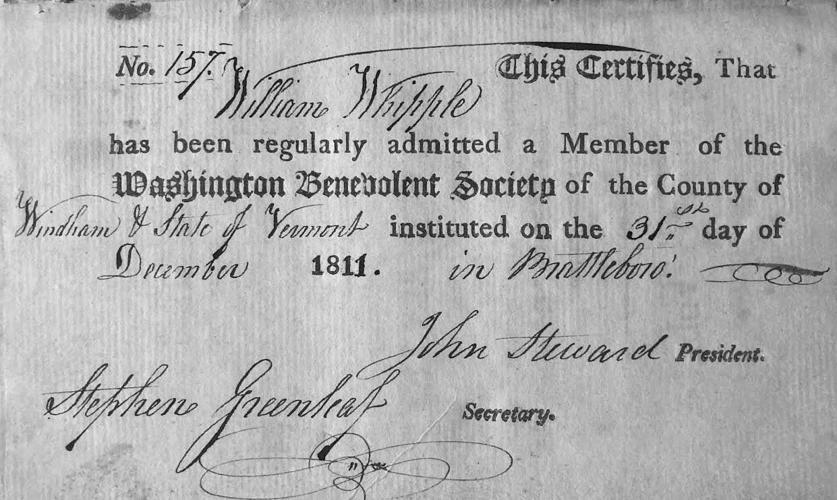 This membership card was among the Washington Benevolent Society artifacts from 1811 that were donated to the Brattleboro Historical Society by descendants of William Whipple.

This booklet and ribbon were some of the Washington Benevolent Society artifacts from 1811 that were donated to the Brattleboro Historical Society by descendants of William Whipple.

This membership card was among the Washington Benevolent Society artifacts from 1811 that were donated to the Brattleboro Historical Society by descendants of William Whipple.

BRATTLEBORO — In 2015 the Historical Society received a package in the mail from a family in Windsor Locks, Connecticut. The passing of one generation had caused the next generation to sort through boxes of “Dad’s stuff.” In one of the boxes were Brattleboro-related items that the family decided to donate to our organization.

William Whipple was born in Norwich, Connecticut in 1763. His extended family moved to Brattleboro when he was young. By the 1770s three branches of Whipples had settled in town. William met Sophia Prouty and they married. He went on to serve in the American Army during the Revolution. By the 1800s he was a prominent member of the community and served on various committees, including the town’s Congregational Society Finance Committee.

The signatories on Whipple’s 1811 membership card were John Steward and Stephen Greenleaf. They were also prominent men of the community. Steward was one of the founders of Brattleboro’s first educational institution, Academy School, and Greenleaf served 45 years as Brattleboro’s Town Clerk.

According to “The Annals of Brattleboro,” Elnathan Allen and Samuel Elliot also served as officers in the local chapter of the Washington Benevolent Society. Allen was a Revolutionary War veteran, lived in town at the time of the first 1790 census and owned a fair amount of property in the East Village. When Samuel Elliot served as vice president of the Washington Benevolent Society he was also Windham County State’s Attorney. He was one of the original owners of the Hinsdale toll bridge and had served as the town postmaster for seven years.

William Whipple’s membership card indicated that there were at least 157 members in the local chapter of the Society. These societies were popular in New England and New York. The members were typically prominent Federalists who wanted to take steps to influence upcoming elections. The Washington Benevolent Society was one of the earliest examples of what would become Political Action Committees. Each member received a membership card, a copy of President Washington’s Farewell Address, and a silk or vellum ribbon badge bearing Washington’s portrait and the slogan “Pro Patria,” (for one’s country) printed on the ribbon. These are some of the earliest mass-produced political items in the United States.

In the early 1800s the United States was caught up in trade conflicts and expansion disagreements with France and Great Britain. The two European countries were engaged in what was to become known as the Napoleonic Wars. The United States wanted to remain neutral and trade freely with both European countries but that became increasingly difficult. The U.S. also wanted to expand its borders further west but was hampered by British support of Native Americans. This brought about the War of 1812.

“The Annals of Brattleboro” put it this way: “Political opposition to the policy of the government in the War of 1812 gained considerable ground in this part of the country, owing to a general financial depression, the result of burdensome taxes, nonimportation laws and accumulating debts. Banks ran out of money and there were many failures among businessmen.”

Mary Cabot, the author of “The Annals of Brattleboro,” went on to explain that the local chapter of the Washington Benevolent Society was very active. She quoted an 1814 letter written by the Society and sent to the Northfield, Massachusetts chapter, “Permit us to enquire whether the cup of our calamity is nearly full? Whether the enormous taxes now collecting — the renewal of the embargo — the folly and cruelty of the war, and the sacrifice of our blood, treasure, commerce and peace, will ever again open the eyes of the American people? Will not the blood wantonly spilt cry from the ground? Will not the awful and distressing progress of this war rouse up their slumbering senses and make the government tremble?” The letter went on to invite Northfield members to a regional meeting in Putney where next steps for the organization could be planned.

A Vermont newspaper that supported the United States government during the war wrote this about the Washington Benevolent Society, “those self-created, secret clubs, which have lately sprung up among us, and call themselves ‘Washington Benevolent Societies,’ are much to be suspected, as organizations designing to interrupt the salutary measures of government under the mask of patriotism, to disseminate the seeds of discord, anarchy and confusion among the people, from motives unfriendly to the general good, and incompatible with the sacred oracles of this nation’s founding.”

We find it interesting that the Washington Benevolent Society, a political arm of the Federalist Party, would provide a copy of Washington’s Farewell Address to its members. In the 1796 address Washington warned the country against the rising power of political parties. He believed political parties would negatively influence the operation of government and possibly destroy the country. He argued that political parties would demand loyalty to the party over the welfare of the country. And yet, the Washington Benevolent Society, one of the first political action groups in America, chose to share this speech with its members as they attempted to undermine the national government in order to meet their regional needs. Next week we’ll focus on local involvement in the War of 1812.