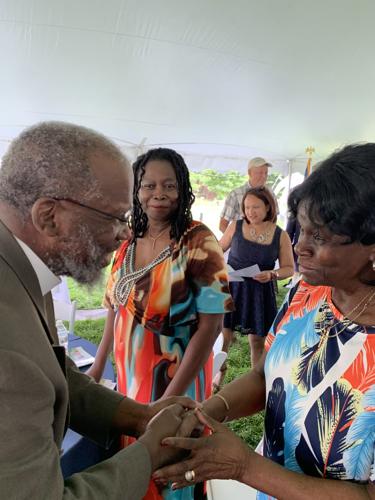 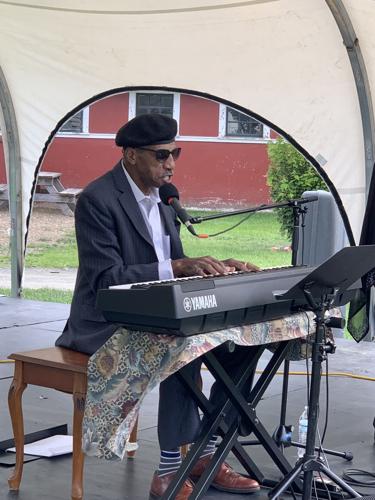 Sam Waymon plays for the community sing at the NAACP Freedom Fund Dinner. 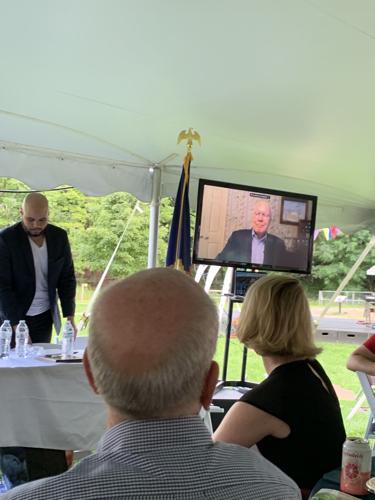 Sam Waymon plays for the community sing at the NAACP Freedom Fund Dinner.

BRATTLEBORO — Over 300 people began streaming onto the Retreat Farm and into a big white tent at 5 p.m. on Saturday as Sam Waymon, brother to Nina Simone, and two female vocalists set the rhythm for the Third Annual NAACP Freedom Fund Dinner. With upbeat rhythms, people gathered to sing together and enjoy dinner and the official program.

Cliff Wood, formerly a college president, had organized young and older NAACP members to make for a moving evening of food, celebration and song. The formal events of the evening began by honoring the Atowi Project at The Retreat Farm and Elnu Abenaki people of the region, and proceeded to the unison pledge of allegiance and the national anthem sung by two young men.

Juan Cofield, president of the New England Conference of the NAACP, brought his greetings and welcome, along with congratulations for the work of the local chapter and specifically to Steffen Gillom, the branch president, who, along with friends established what is now a vibrant active advocacy group, just three years ago.

Tears, applause and the streamed-in voice of U.S. Sen. Patrick Leahy marked a high point of the evening. Gov. Phil Scott was represented by Vermont’s Executive Director of Racial Equity Xusana Davis, and U.S. Rep. Peter Welch shared his own experiences working with Leahy. Welch shared moving accounts of Leahy’s work with John Lewis for the voting rights legislation, and currently on the John Lewis Voting Rights Act. Both Welch and Leahy are determined to pass the law before Leahy leaves office on Jan. 3, 2023.

Another poignant moment came as Leahy’s voice cracked, talking about how important it is to protect all children and particularly LGBTQ youth. It was shared that when Leahy was elected in 1975, there had not been a democratic legislator for 30 years and that, while other senators have come and gone, he has been elected again and again, always standing out as someone devoted to all Vermonters, regardless of their political persuasion.

Until a few weeks ago, Leahy and NAACP organizers had hoped that he would be able to attend in person, but his recent hip surgery made that impossible. Nonetheless he watched and participated in a livestream of the event, thanking Welch and wishing him well his upcoming election bid to replace Leahy in the U.S. Senate.

The keynote address was given by sought-after speaker Rev. Dr. Arnold Thomas.

Thomas, whose family moved from Alabama during the Great Migration, has lived and worked in Vermont for almost 25 years, serving first as Conference Minister for the United Church of Christ beginning in 1998 and later at Riverside Church in New York City and commuting to his home in Underhill. Current pastor of Good Shepherd Lutheran Church in Jeffersonville, he hosts the Racism in America podcast. He acknowledged the threats that he as an African American has received over the years and how it has felt as a black man living in and traveling all over Vermont. He also acknowledged that he has been surprised by welcomes he has received in the unlikeliest of places.

The theme of the night’s event was “Building Community,” certainly a hallmark of Leahy’s work, and Reverend Thomas highlighted the divisions of the past 150 years, along with efforts made and achieved along the way at great cost to people of color and their allies. In the end he pointed to the places and people everywhere who can make the differences in other’s lives and in the country’s history. As he shared his own experiences, people laughed, cried and later stood to give him a standing ovation.

The evening ended with lifetime achievement plaques given to Peter Elwell, Brattleboro’s former town manager, and to Norma Hardy, chief of police in Brattleboro. Clergy from Jewish, Muslim Christian, Buddhist and Indigenous communities offered blessings to close the event as the sun set with the singing of “We Shall Overcome”.

The NAACP will continue its work for equity, political rights and social inclusion in this region throughout the year. For more information, check the website https://windhamnaacp.org.

Lise Sparrow is chair of Religious Affairs for the Windham County NAACP.