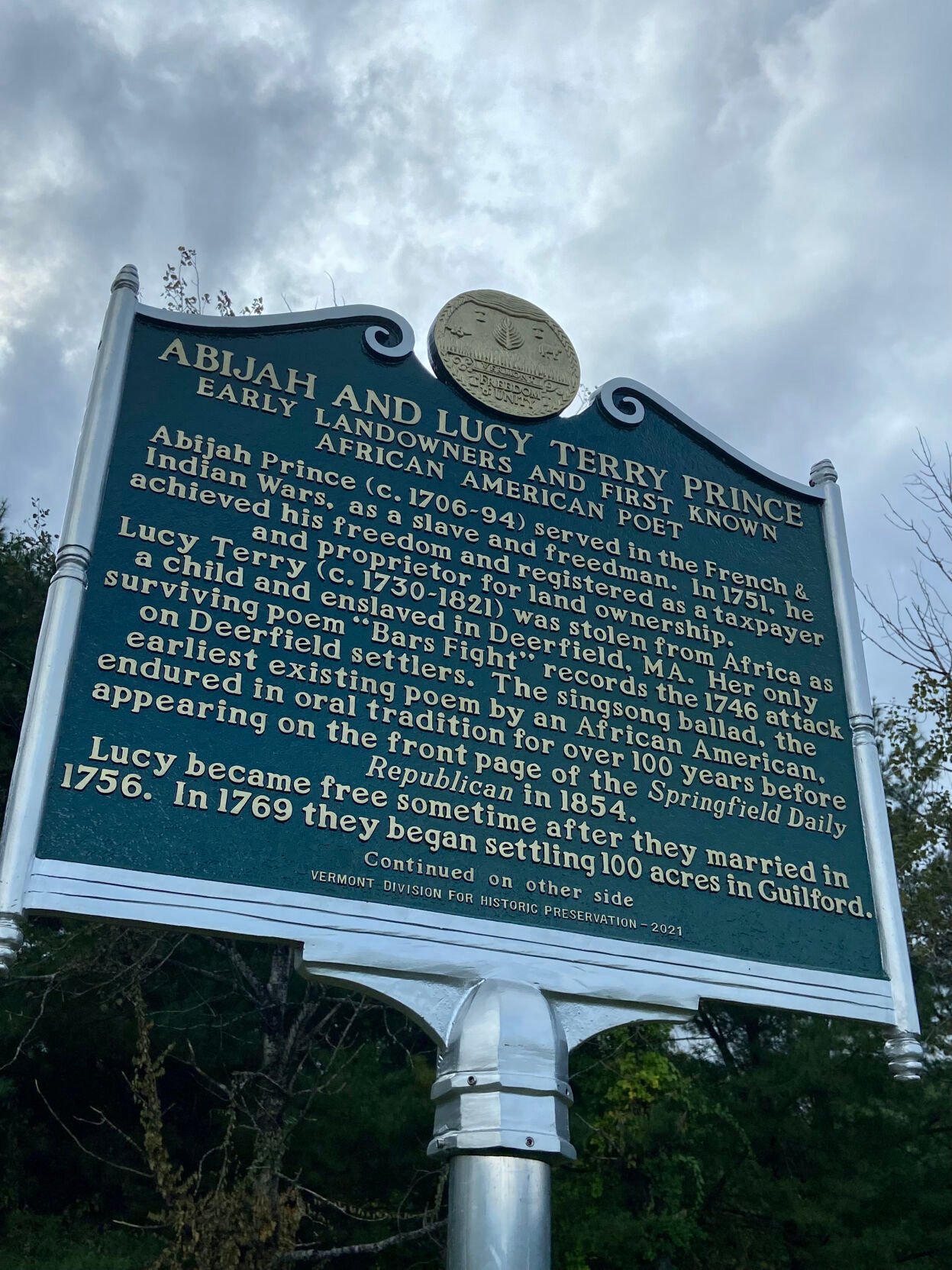 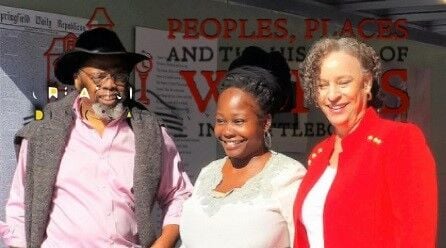 From left, Curtiss Reed, Shanta Lee Gander and Gretchen Gerzina have been a major part of the process to get a historic marker at the Guilford Welcome Center to recognize Lucy Terry Prince, considered the nation’s first African American poet, and her husband Abijah Prince.

From left, Curtiss Reed, Shanta Lee Gander and Gretchen Gerzina have been a major part of the process to get a historic marker at the Guilford Welcome Center to recognize Lucy Terry Prince, considered the nation’s first African American poet, and her husband Abijah Prince.

GUILFORD — The Brattleboro Words Trail, the town of Guilford and the Guilford Historical Society are co-hosting a community event to dedicate a state historic marker on Tuesday, at 11 a.m.

The dedication will recognize the achievements of Lucy Terry Prince, considered the nation’s first African American poet, and her husband Abijah Prince. The Princes were early Black landowners in Guilford and Sunderland in the mid 1700s, and advocates for civil rights.

Other featured guests will include:

Gretchen Holbrook Gerzina, Marlboro College alumna and former Guilford resident who wrote the Pulitzer Prize-nominated book “Mr. and Mrs. Prince: How an Extraordinary Eighteenth-Century Family Moved Out of Slavery and into Legend.”

Shanta Lee Gander, Brattleboro-based, multi-media artist who has written about and portrayed Lucy dramatically for the Brattleboro Words Trail, https://brattleboro.stqry.app/en/story/16641. She will perform Lucy Terry Prince’s one and only known work, “Bars Fight.”

Curtiss Reed, executive director of Vermont Partnership for Fairness and Diversity and founder of the Vermont African American Heritage Trail.

Lucy Terry Prince is recognized as the United States’ first known African American poet for documenting a 1746 attack involving colonists and indigenous inhabitants of the area often referred to as the second Deerfield Massacre (the first happened in 1704) or the“Bars Fight.” The poem of the same name, “Bars Fight,” survived in oral tradition for 100 years before being published on the front page of the Springfield Republican on the occasion of her death in 1821.

The Brattleboro Words Trail submitted the application initiating the process for a historic site marker at the Welcome Center in order to share this Vermont history with the almost 800,000 people estimated to pass through the Center annually. The Guilford Historical Society and the Guilford Select Board both voted in support of the project.

“Lucy and Abijah Prince, an African American family, were among the very first settlers in Vermont,” said Gerzina. “It’s so important that Vermonters know this history, which may surprise many and should revise the way people imagine Vermont history and the way that it’s taught.”

July 11 marked the 200th anniversary of Lucy Terry Prince’s death (c. 1730-1821). Her husband, Abijah Prince (c.1706-94) served in the French & Indian Wars as a slave and freedman. The Guilford Select Board voted to recognize July 11, 2021 as ‘Abijah and Lucy Terry Prince Day’ to honor the contributions they and other individuals of color have made to Guilford. The Sunderland Selectboard also adopted a proclamation to honor them.

These town efforts were supported by State Reps Sara Coffey of Guilford and Kathleen James, Seth Bongartz, and David Durfee of Sunderland, who completed a joint Vermont State House and Senate resolution to honor Abijah and Lucy Terry Prince.

Partially inspired by Gerzina’s book, the Brattleboro Words Project began working with the theme of the Princes in 2017 when it won a National Main Street/ Edward Jones “Placemaking on Main Challenge” to fund a Mobile, Interactive Literary Exhibition Space (MILES). The result was “Lucy Speaks,” which debuted on Main Street as part of the 2017 Brattleboro Literary Festival.

“The Princes’ story is essential Vermont history,” said Gander. “Their story and stories about Black Americans in early New England are key to correcting our misunderstandings about the individuals who helped to build our country. Having this historic marker at the Welcome Center is a full gesture that Vermont is a state that is seeking to live its diversity.”