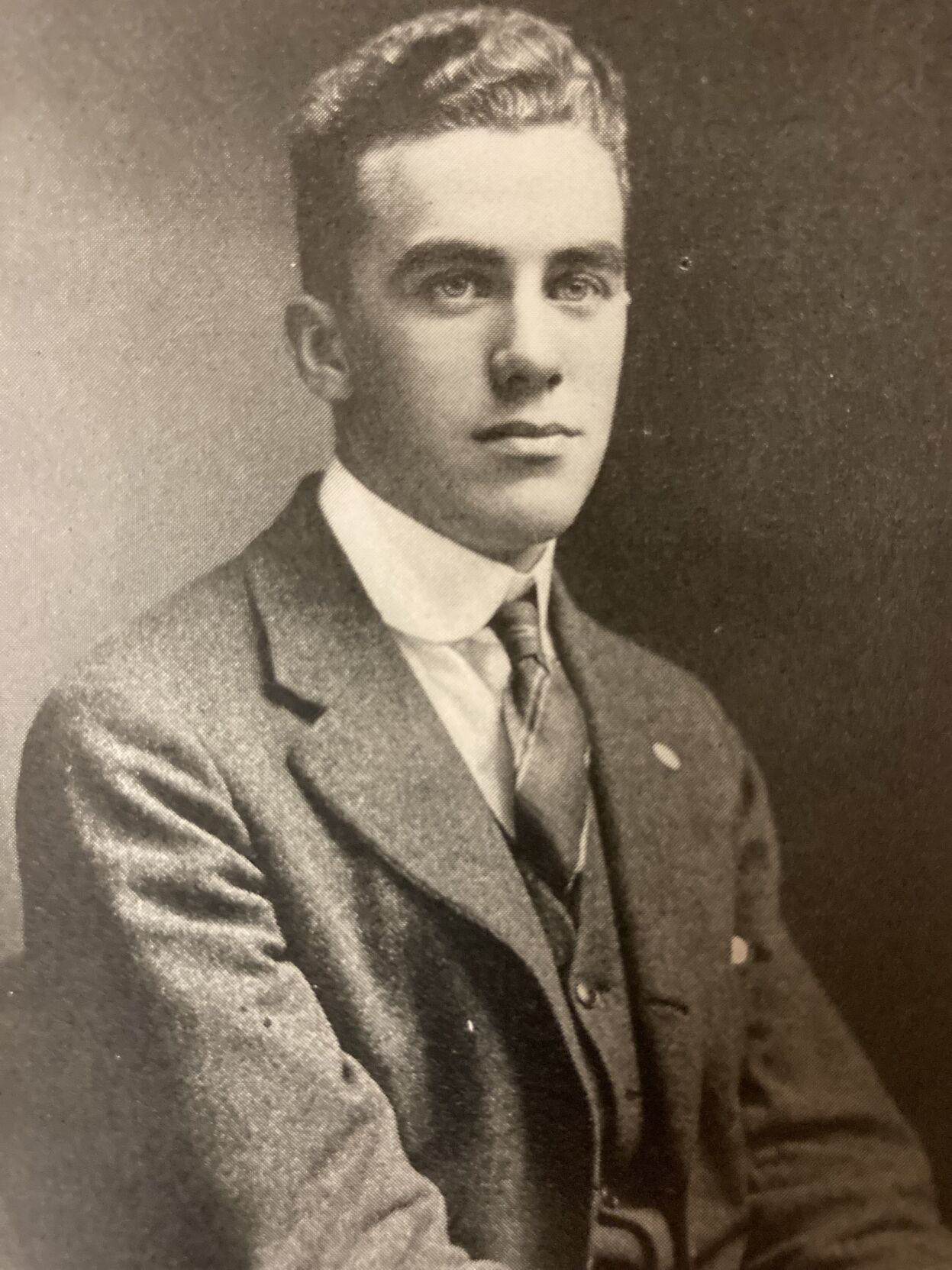 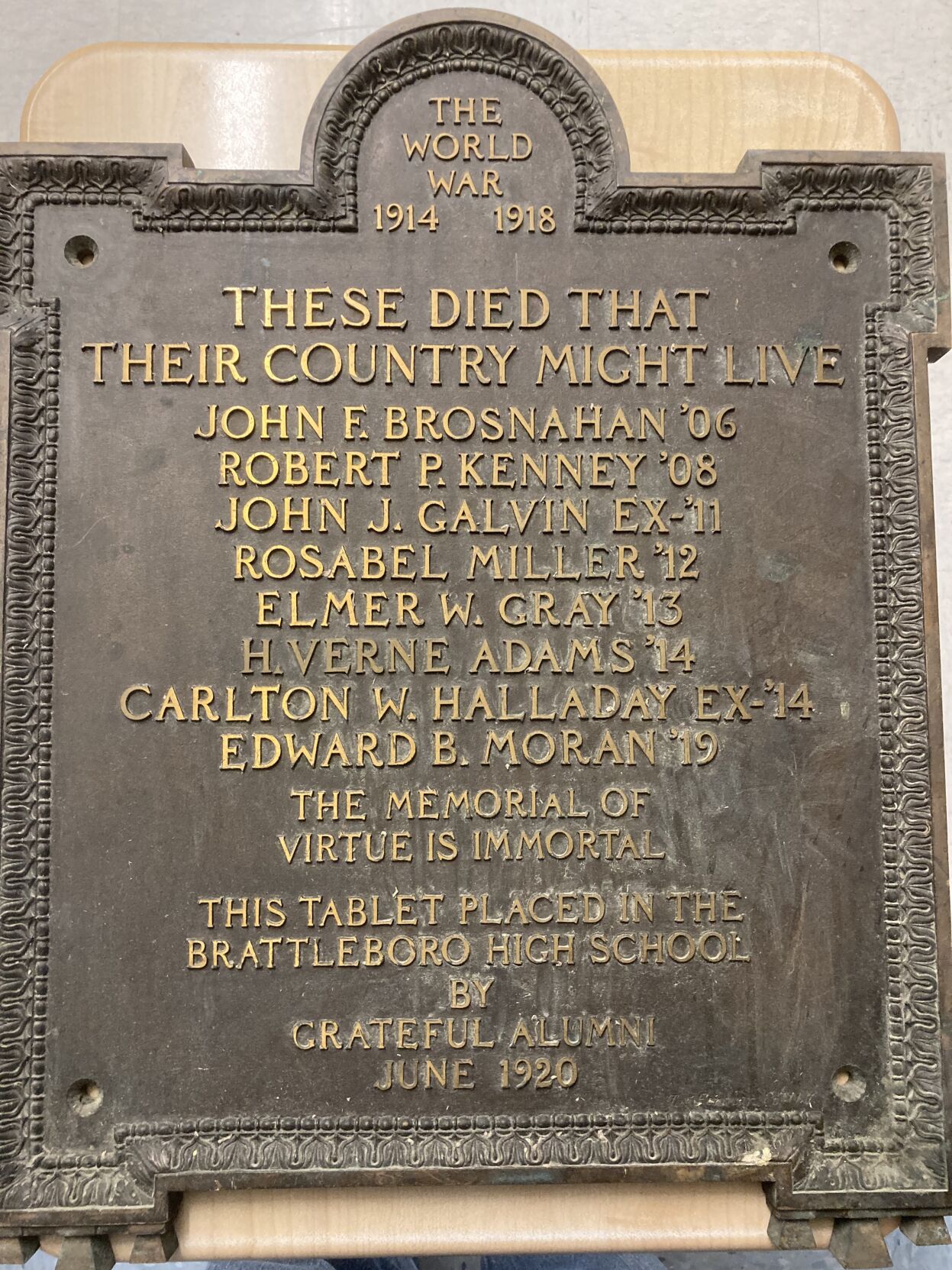 A 1920 Memorial Tablet honoring those Brattleboro High School members who died serving in World War I. 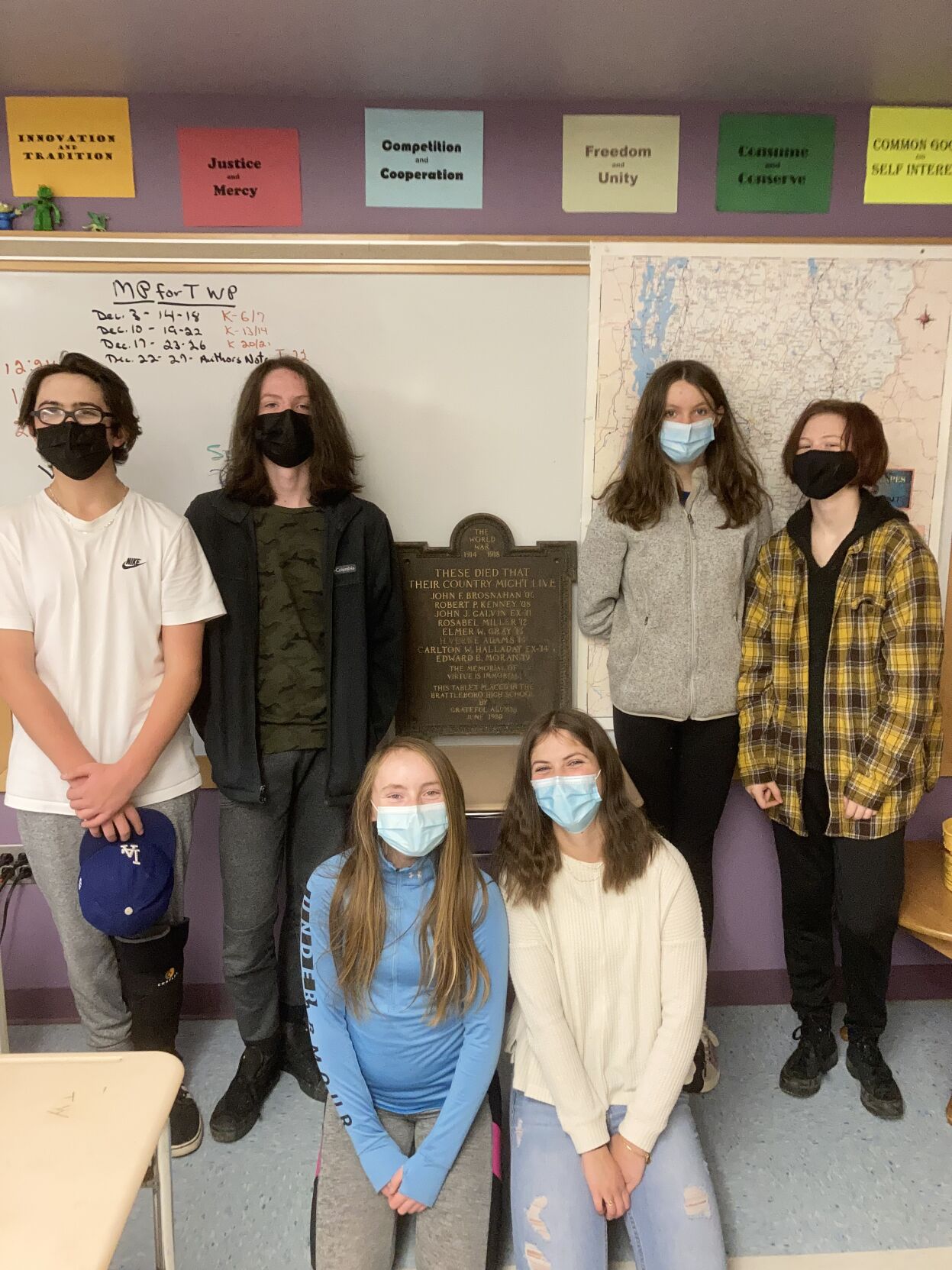 A 1920 Memorial Tablet honoring those Brattleboro High School members who died serving in World War I.

BRATTLEBORO — A few weeks ago, Brattleboro Union High School Assistant Principal Chris Day contacted the Brattleboro Area Middle School’s Local History class because of an interesting discovery in a closet next to the BUHS gym. A heavy, dusty bronze tablet was uncovered in the back of the unused closet. No one working at the school could remember the last time the closet had been opened.

The closet is under the northeast staircase and brings to mind the place where Harry Potter slept while living with his relatives. The bronze tablet was in the back of the closet, under the staircase, and seemed like a discarded relic from a different time.

The students of the Local History class cleaned up the bronze tablet and began to investigate the history of the artifact.

In 1920 the 14th Brattleboro High School Alumni Reunion took place and more than 400 people took part in the parade and activities. The Alumni Association led the parade up and down Main Street. The Brattleboro Military Band began the parade at the high school, (now Municipal Center) and the earliest classes followed. Farther down the line was the high school drum corps. The parade made its way to the intersection with Elliot Street and then went back up Main Street to the Wells Fountain. A large crowd was on hand to cheer the parade alumni. Participants filed into the school and the high school orchestra played a few songs. The Star Spangled Banner was sung and absolute quiet was asked for as preparations were made to dedicate the bronze memorial tablet.

The tablet was a gift of the Alumni Association and was placed on the north wall next to the double doorway. It contained the names of eight Brattleboro High School alumni who had died while serving during World War I. Until the tablet was unveiled it was covered by a silk flag. The president of the Alumni Association presented the tablet to the high school principal. The principal read the Rudyard Kipling poem, “Recessional” and the high school chorus sang the hymn, “O God, Our Help In Ages Past.”

Once the tablet was cleaned the BAMS students began researching the stories of the eight young people listed on the memorial. John Brosnahan lived on Beech Street and graduated from BHS in 1906. He was cited for his musical and athletic talents and was secretary of his class. He went on to attend Albany Business College and became a bookkeeper. He was working at an Altman Department Store in New York when he was drafted. While in France, John was killed in battle and buried in a military cemetery. His mother was notified by telegram of her son’s death more than a month after the battle.

Robert Kenney graduated from BHS in 1908. While in high school he worked at E.L. Hildreth. After graduation he moved to Philadelphia and worked in the insurance industry. He was a corporal in the US Army and died mysteriously of heart failure. Kenney had been chosen as class poet and a poem of his appeared in the Dial publication. Here is the first stanza:

“Time is ever urging us

Still farther upon our way;

We must say farewell this day,

We must take our part in life,

And do what comes to us well,

In every endeavor looking to

Our motto, “Strive to Excel”

John Galvin earned his three year certificate in 1911. He was a Lieutenant in the US Army. He had lived on Canal Street. Reports from France in 1918 said he was killed in action. An enemy shell bombardment caught him as he returned to the trenches from a medical tent where previous wounds had been bandaged. In a letter to Galvin’s mother the military chaplain wrote, “He was a born soldier, loved the military and was idolized by his men.”

Rosabel Miller was a 1912 class officer and wrote the class history for the yearbook. She graduated from Mt. Holyoke College and was taking Red Cross nurse’s training at New York’s Bellevue Hospital when she contracted the flu in 1918. Within a week she succumbed to the virus. Her father was a doctor and the family had joined the Red Cross a year earlier.

Elmer Gray earned his three year certificate in 1913. He was a bookkeeper at Twin State Gas and Electric Company in the American Building on Main Street. Gray enlisted in 1917 and was a regimental sergeant major. Gray died of influenza while on the “Leviathan” transport ship on the way to France. Fifty other soldiers on the trip died of the flu while traveling across the Atlantic as well. He left a young wife. They had been married for three months.

Carleton Halladay earned his three year degree in 1914. He worked at Dunham Brothers Company when he left school and later worked at New England Telephone and Telegraph. He enlisted in October 1917 and became a sergeant in a telegraph battalion. In February 1918, Halladay died while at Camp Devens in Ayer, Massachusetts. He became ill with measles, a week later he developed pneumonia, and died shortly after.

Verne Adams graduated from BHS in 1914. He grew up on Putney Road and was very involved in athletics. After high school he attended UVM and left during his junior year to join the aviation service. He was president of his college class and manager of the football team. He became a military aviation instructor and died as a result of a plane crash while teaching a flight cadet how to land properly in windy conditions. The student was flying the plane and Adams was killed instantly when the plane’s nose did not rise in time.

Edward Moran was a member of the class of 1919. Moran grew up on Chestnut Hill and was a star member of the high school track and football teams. He also regularly placed in regional New England track meets. He joined the Navy in October 1918 and died of influenza while at the Naval Base in Hingham, Massachusetts.

At the time of Moran’s death Brattleboro had shut down schools, churches, theaters and public gatherings for one week and the board of health was announcing another week of closing as 67 homes had been quarantined and 102 influenza cases had been reported. Fourteen new cases were announced the day Moran died and 12 more homes were quarantined. Brattleboro experienced its second death from influenza the night before Moran died. An emergency hospital had been created to deal with the overflow cases of influenza in town.

Researching the stories of the eight people on the memorial tablet caused us to look more closely into the 31 names that are on the World War I section of the Brattleboro Veterans Memorial located on the Common.

We found that Rosabel Miller was not listed on the granite memorial. However, Alice Potts, another Red Cross nurse, is on the memorial. Both died of influenza while caring for soldiers in US hospitals. If we count Rosabel Miller that brings the total to 31 deaths connected with the war effort. Of those 31, 17 died as a result of influenza. Six were killed in action and 8 died from other causes ... spinal meningitis, measles, blood poisoning, heart failure and accidents not connected with battle.

Now that the World War I bronze tablet has been recovered from a forgotten storage closet the question remains, “What will become of it?” One hundred and one years ago a parade and ceremony were conducted to honor the fallen Brattleboro High School members. Songs were sung, music was played, and dignitaries declared that their sacrifices would always be remembered.

This is a lesson from history. The lives and sacrifices of those who came before are honored if the stories are told and passed from one generation to the next. Here’s something else to ponder. Which stories should be displayed in public hallways, and which stories are better stored in dusty closets?