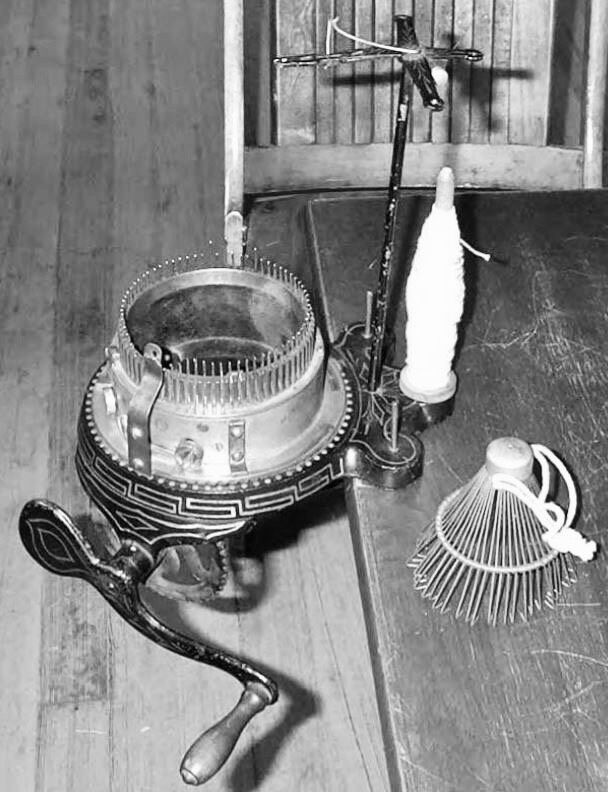 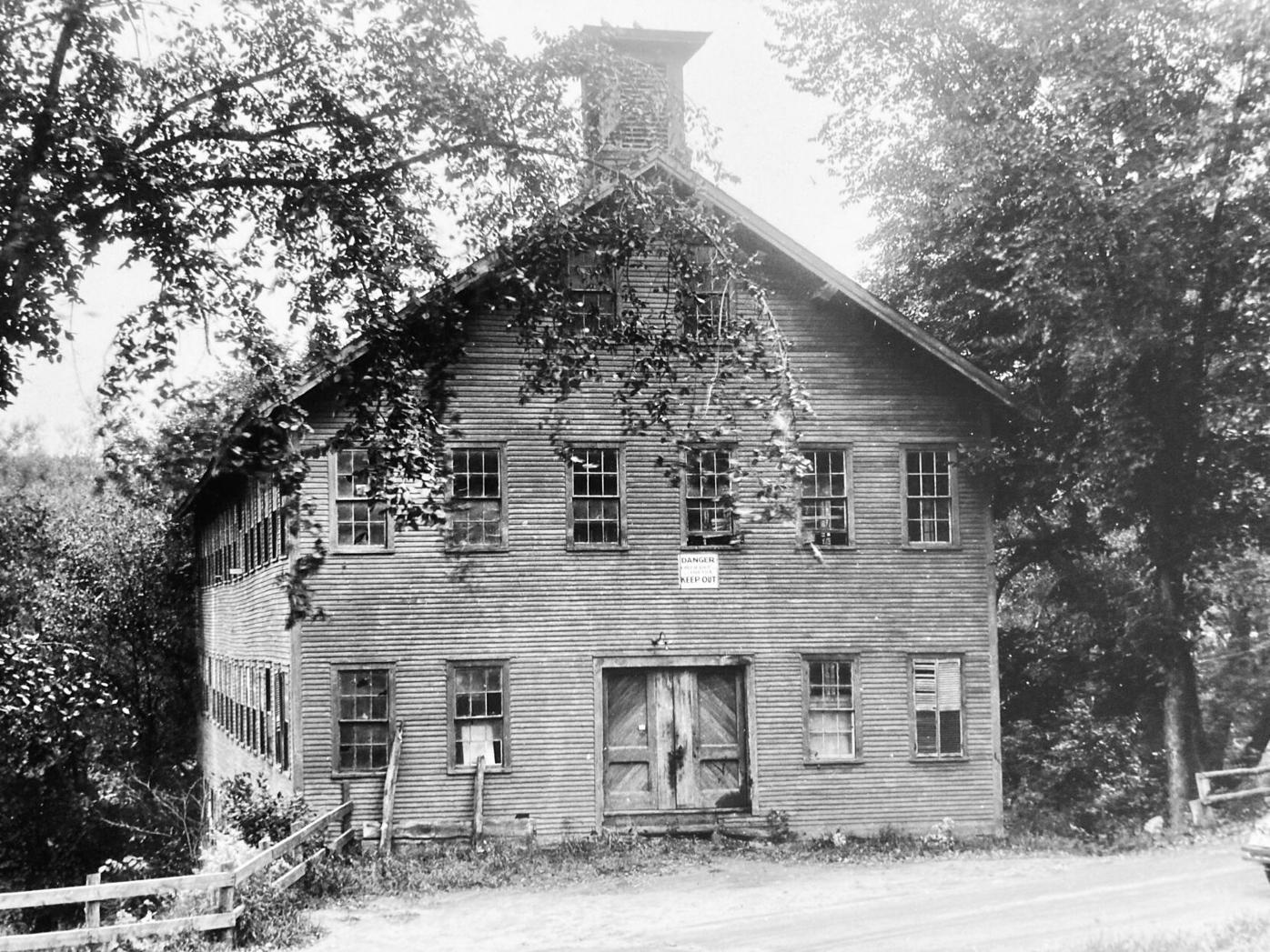 The Centreville Mill 1933 near the corner of Williams Street and Western Avenue. 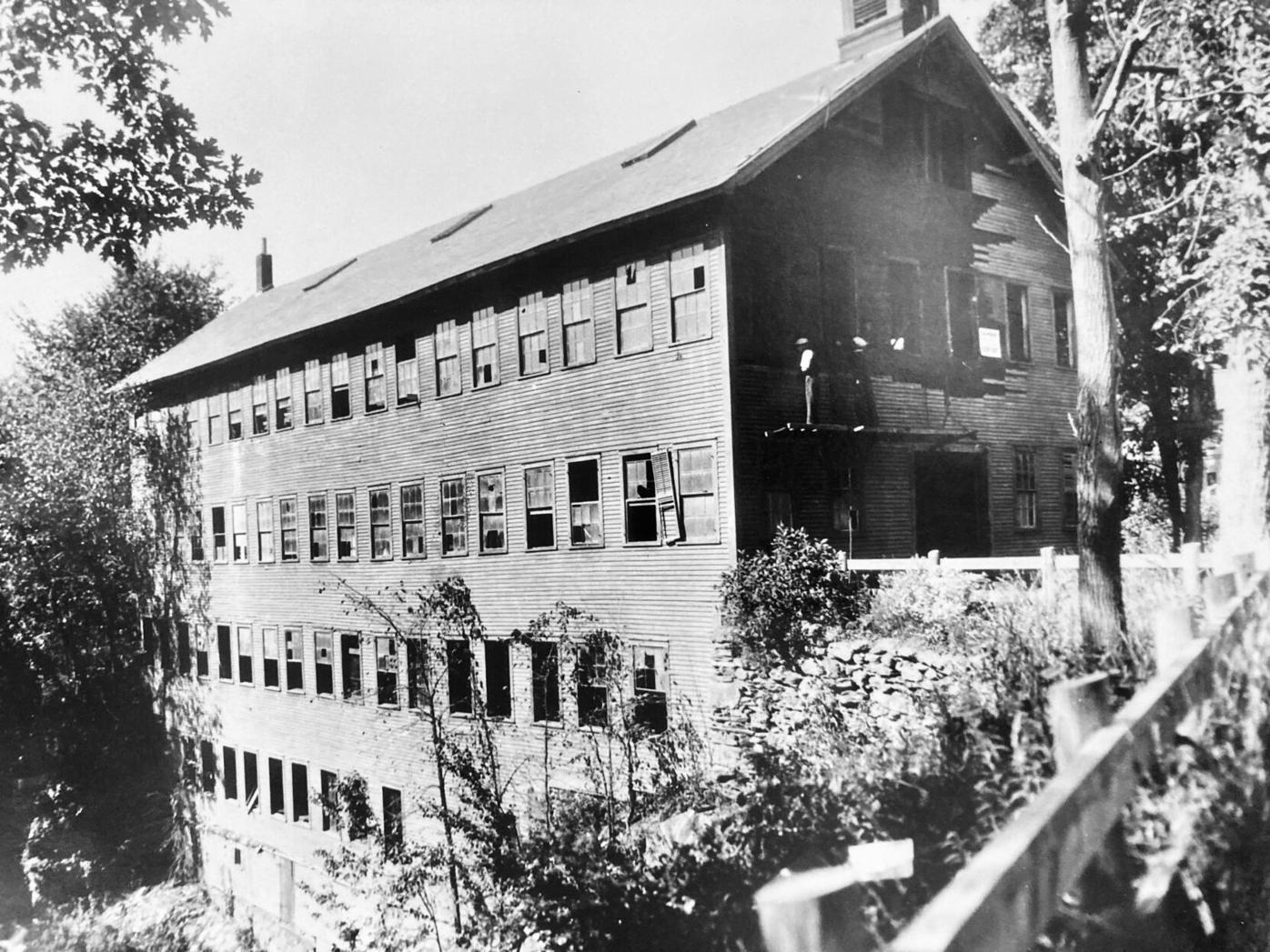 Demolition of the Centreville Mill began in October 1933. 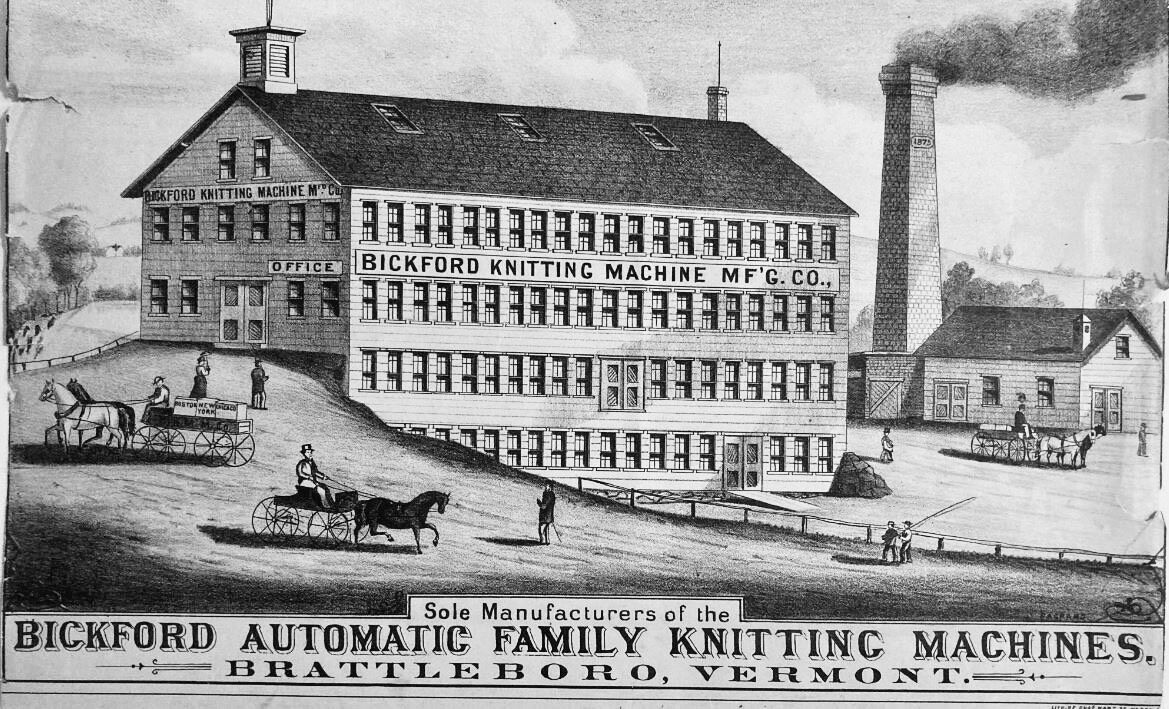 An illustration of the Bickford Knitting Machine Mill in Centreville.

The Centreville Mill 1933 near the corner of Williams Street and Western Avenue.

Demolition of the Centreville Mill began in October 1933.

An illustration of the Bickford Knitting Machine Mill in Centreville.

A venerable sage from Putney once said, “Few things in life are better than a well-crafted pair of socks.” Many people who used the Bickford Family Knitting Machines in the 1800s would probably agree. The Bickford machine was a hand-cranked device that made it much easier to do circular knitting work for items like socks and leggings.

Adjustments to the settings allowed for the automation of many different kinds of stitches. Dana Bickford’s company advertised that Bickford Family Knitting Machines could easily produce door mats, shawls, blankets, slippers, capes, and furniture covers; as well as, comfortable socks.

Dana Bickford was originally from Quechee, Vermont. He patented the machine in 1867 and began producing the automatic knitters in New York City. These machines were successful and he marketed them in Europe as well.

Meanwhile, in Brattleboro, a large water-powered mill had been constructed by the New England Furniture Company. It was located at the intersection of Williams Street and Western Avenue. The mill was perched on a rocky ledge next to the Whetstone Brook. When there was enough water, energy for the mill was produced by the brook. When the water level was too low the mill was powered by steam.

The building was 100 feet by 40 feet and was four stories in height. The mill was completed in 1872 but the furniture company was not successful and the tools and stock of the company were sold at auction only a year after it began operations.

The owners of the bankrupt furniture company possessed this large mill and began looking for another industry to move into the facility. In 1874 negotiations were begun with Dana Bickford to bring Bickford Knitting Machines to the Centreville Mill.

Centreville is the area half way between the old East Village (along the Connecticut River) and West Brattleboro. In January 1875, Dana Bickford and local investors began a joint stock company named the Bickford Knitting Machine Manufacturing Company. The Estey Company and Charles F. Thompson Company were major investors and $150,000 of local capital funded the business.

The Vermont Phoenix newspaper wrote, “The new Bickford Knitting Machine Manufacturing Company commenced operations at their factory on February 1. It is probable that no new enterprise has ever been established in Brattleboro with a better promise of success than this company. The men behind the product are men of good faith and the quality of their work can be confidently relied upon. Everybody knows a sewing machine is a household necessity, but very few people have more than a vague idea as to the practical use of a knitting machine. We believe that a trial of the machine will fulfill the needs and desires of most households.”

A Woodstock, Vermont paper wrote, “Aside from Estey Organ, Brattleboro can hardly be classed among the heavy manufacturing towns; therefore, whenever an enterprise springs into life with such flattering prospects for success as does the Bickford Knitting Machine Company the town’s citizens would naturally become deeply interested. Although the knitting machine already has a world-wide reputation by having been on the market for some years, it is particularly pleasing to the Brattleborians to be able to claim they are home to its place of manufacture. The factory is located about one mile from the village and is four stories high. The machinery is of the highest quality and only skilled mechanics are to be employed.”

The first year of operations proved very successful. By the end of 1876 the company had hired 40 employees and completed an order for 1,000 knitting machines to be shipped to Russia. The business looked to expand into the production of sewing machines as well. Levi Fuller was one of the major investors in Bickford Knitting Machines and had previous experience with manufacturing sewing machines in the 1860s.

Knitting machines for the home were a new invention and Bickford’s model was at the higher end of the price range. Other knitting machine manufacturers were in competition with the Brattleboro company but a version of the Bickford machine had been on the market for a decade so the Bickford brand was well-known and respected.

Disaster struck in 1879. Two inventors sued Dana Bickford for allegedly stealing their ideas in order to improve the Bickford Family Knitting Machines. William Franz and William Pope claimed that they had patented certain manufacturing techniques which were used by Dana Bickford in his knitting machine design. They also said that Bickford did not purchase the technology from them. Instead, he stole their design improvements and claimed them as his own.

A Federal Circuit Court in Pennsylvania found in favor of the two men and ordered that they should “recover the profits and gains made by Bickford in consequence of his patent infringement.” The court also said that Bickford was not allowed to make or sell any knitting machines that included the technology stolen from Franz or Pope. This ruined the Bickford Knitting Machine Manufacturing Company.

Even though some of the most influential and wealthy businessmen in Brattleboro were behind the company, the business no longer had a product it could legally sell. By mid-1880 the company was “financially embarrassed.” Law suits against the company caused the local sheriff to confiscate the factory and the equipment inside it. Anything connected to the Bickford company was sold to pay back debts to creditors who were owed money.

Dana Bickford would move to Peterborough, New Hampshire and start another knitting machine company that did not include the patent designs stolen from Franz and Pope. This company would not meet with much success and was eventually destroyed in a suspicious fire.

Levi Fuller would gain control of the Centreville Mill and attempt to produce sewing machines. The Brattleboro Sewing Machine Company also struggled and there were claims and counterclaims of patent stealing in the sewing machine business as well. The company had the support of the Estey Organ Company but Fuller’s sewing machine design was not competitive with other machines already on the market.

The Brattleboro Street Railway Company eventually bought the Centreville Mill and used the water and steam power to produce electricity for the local trolley system. The factory building was taken down in the 1930s.

While the Bickford Knitting Machine Manufacturing Company existed in Brattleboro for only five years it is still true that a good pair of well-made socks can be the foundation for a better day.

We’d like to thank Jake McDermott for inspiring the topic. The information for this article comes from the newly donated research files of John Carnahan.