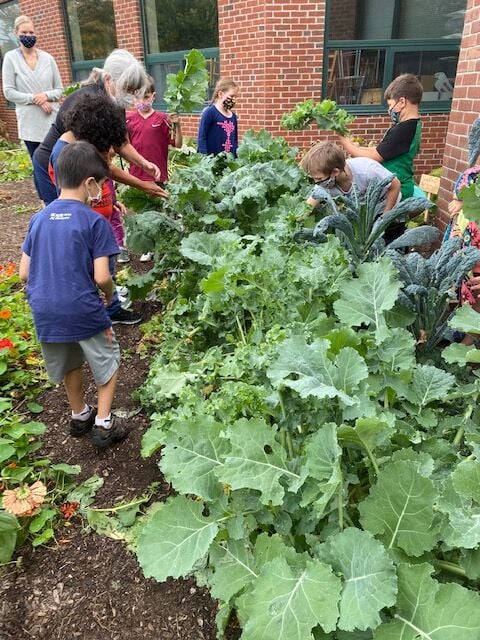 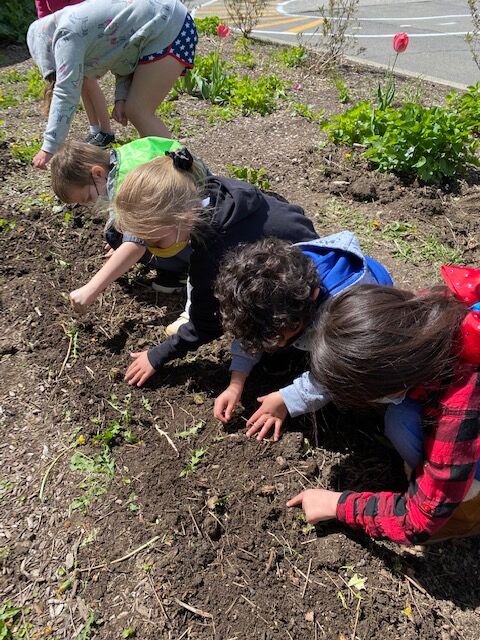 BRATTLEBORO — Seeds planted during the 2018-2019 school year at Oak Grove School are bearing fruit as a living schoolyard and a vibrant garden featuring native plants take root on campus. Over the past two and a half years, a collaborative process between school staff, parents, students and administration unfolded, making steady progress in spite of several obstacles. Principal Mary Kaufmann celebrates the project’s success, stating that “the schoolyard has developed into a lovely and welcoming space. Kids love to be outside! The more we have worked on the space, the more time we see classes outdoors.”

The visioning process for the project began in 2018 as a conversation between then principal Jeri Curry and a group of parents interested in making improvements to the playground. They identified problems including: A lack of quiet spaces for students in need of a less stimulating recess environment; outdated play structures and not enough swings; a lack of shady areas on hot, sunny days; limited choices for a range of play opportunities across all ages, especially pre-K and older students.

Some of the champions who helped bring this vision to reality are:

• Former principal Jeri Curry began the project in her final year as principal.

• School garden coordinator Tara Gordon led the move of the school garden and is connecting the garden to the classroom through hands-on learning.

• New facilities manager Chad Pacheco continues to support the project as he enters into his new role.

• Academic support teacher Laura Haskins leads the Oak Grove Green Team and has been planting trees with students on the playground for many years.

• Fifth-grade teacher Karen DiIorio-Bowen has been integrating nature-based education into her curriculum for many years and built part of her curriculum around the living schoolyard this year.

• PTO chair and parent Tara Davis advocated strongly for the project throughout the process.

Certain elements of the plan have already happened, such as: Relocating the school garden; building a footbridge for creative play; creating a new, wider, curved welcoming pathway at the playground entrance; and building cedar stump seating for the outdoor classroom.

Kaufmann says the garden has “grown and flourished thanks to the work of Tara Gordon and the students at Oak Grove.”

According to garden coordinator Tara Gordon, “The Oak Grove School garden is developing into a special place abundant with a rich array of perennial and native plantings, garden cultivars and annual florals, vegetables, fruits, and even mushrooms.”

These plantings are designed to support and encourage outdoor learning, foster connections to nature, and provide opportunities to learn about the local landscape. Gordon sees garden education as an integral part of the school curriculum and community development. Community engagement has been one of the keys to success — during the fall of 2020, a group of “guerilla gardeners” came together and planted more than a hundred spring bulbs donated by various community members and kept the location of the plantings secret from the students for a spring surprise.

Student involvement is another key component of the project. The school invited all students to participate in the Pennies for the Playground initiative. Back in November 2020, tennis ball piggy banks were distributed to all students, who were invited to collect pennies to help support the living playground project. The school community has raised $649.34 so far, including $163 raised by a penny challenge organized by Brattleboro Savings and Loan. Students voted recently to spend this money towards another step in the master plan — creating a new digging area won by a landslide. This will be completed over the summer and ready when students return to school.

DiIorio-Bowen’s fifth-grade class has been a key partner in the project this year through participation in the Wild Treasures program, 350 Vermont’s Rewild Vermont project, and a collaboration with Edible Brattleboro to plant additional trees on the campus.

“The work the fifth graders did this year to learn about the carbon cycle and the environment led to an amazing culminating activity in which plants and trees were added to the playground, bringing more beauty and function to the space,” says Kaufmann.

The students worked and consulted with Gordon to develop a plant list and placement throughout the school grounds following the master plan. Plantings included an array of native perennials, including trees, shrubs, and herbaceous pollinator plants. The project’s budget also includes an extensive signage collection with artwork and research by the students displayed throughout the gardens. The fifth-grade planting day culminated with a closing circle around the new sugar maple tree. Students placed handfuls of soil around the tree roots along with special wishes they had written on pieces of paper to place into the hole. Together, everyone recited the Earth Pledge and sang the official state song of Vermont, “These Green Mountains.”

Jen Tourville’s pre-k class was also involved in lots of garden work this year, setting aside time weekly for planting, harvesting, and cooking together with Gordon. They also enjoyed an infusion of local produce into their snack program thanks to a CSA grant from the Vermont Agency of Agriculture.

Special thanks was extended to various businesses and organizations for supporting the project: Edible Brattleboro for donating fruit trees and a hickory sapling; Bonnyvale Environmental Education Center (BEEC) and local arborist Bob Everingham from All About Trees for donating large cedar stumps for stump seating; numerous neighbors and community members who donated supplies for a mud kitchen playspace for preschool students, bird feeders for classrooms to feed birds throughout the winter, and permission to tap maple trees in the neighborhood; Heritage Maple Farm for supporting the first school sugaring operation by supplying buckets, taps, and other resources; Hamilton Lumber for providing firewood for the wood-fired sugaring operation; and the Food Connects Farm to School team for their continued support throughout the garden move, providing professional development opportunities, and a matching donation to the Pennies for the Playground initiative.

Looking ahead, there are several next steps in the process for the living schoolyard:

• The creation of a sensory path around the playground’s perimeter, funded by a grant from RiseVT. This path will build upon the new bridge, incorporating a living tunnel and a balance trail.

• The construction of an edible mushroom garden along the north side of the building will feature shiitakes and oyster mushrooms.

• A digging area, funded by the Pennies for the Playground initiative, will include mounds for climbing and some cob construction structures.

For information on how to support the living schoolyard project, call Oak Grove School at 802-254-3740 or email principal Mary Kaufmann at mkaufmann@wsesdvt.org.