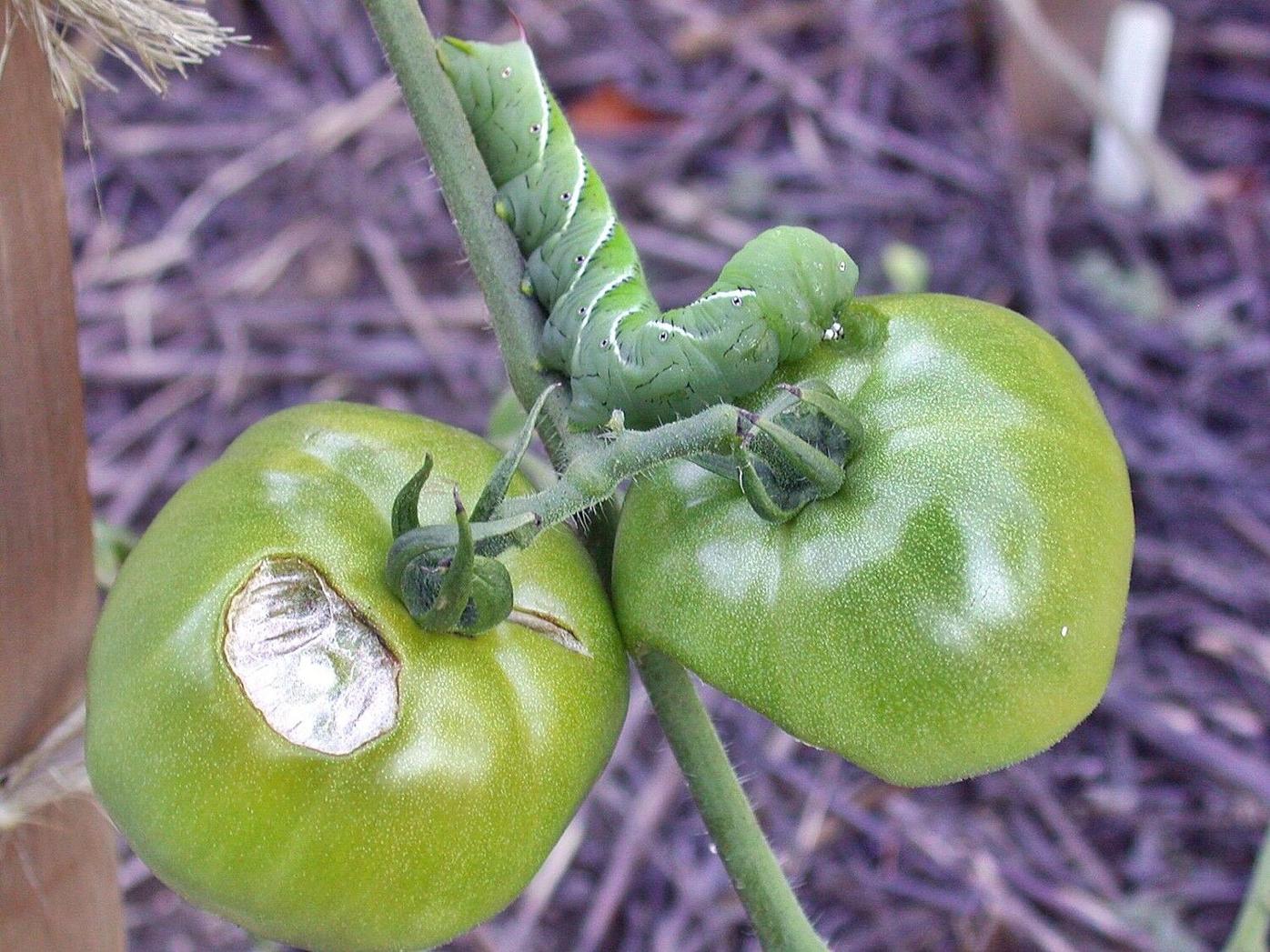 Tobacco hornworm is similar to the tomato hornworm but has a series of angled stripes along its sides. Both hornworms dine on the leaves and fruit of tomatoes. 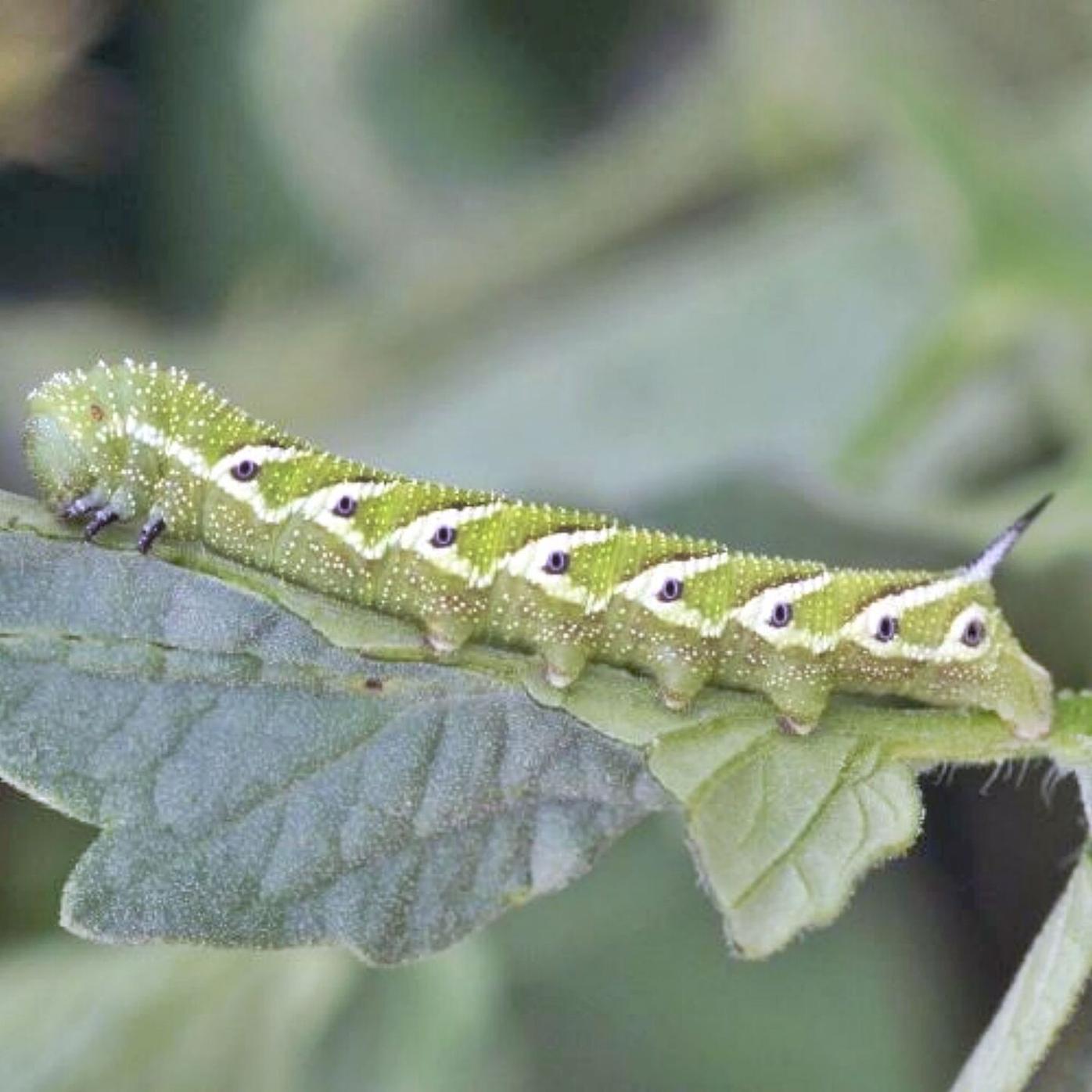 Tomato hornworm can be hard to spot because of their green color.

Tobacco hornworm is similar to the tomato hornworm but has a series of angled stripes along its sides. Both hornworms dine on the leaves and fruit of tomatoes.

Tomato hornworm can be hard to spot because of their green color.

One of the more fascinating, if not disturbing, pests now to be found in the vegetable garden is the tomato hornworm, so called for the large hornlike structure on its tail end. Though quite large, up to four inches in length, its green color, which closely matches that of a tomato leaf, makes it difficult to find the caterpillar before it consumes large amounts of foliage and occasionally the tomato fruits. Usually, defoliated stems and dark fecal droppings are noticed before locating the hornworm.

Another distinguishing characteristic is a series of white V-shaped markings along the sides of the tomato hornworm. A close, but less common, relative sometimes found on tomatoes is the tobacco hornworm, which differs from the tomato hornworm by having a series of seven diagonal lines along its sides. Though usually found on tomato plants, hornworms may also feed on the leaves of peppers and eggplant, as well as moonflower.

Because of their large size, hornworms can be easily hand-picked. The squeamish may opt for applications of an organic insecticide, such as Bt or spinosad, as a means of managing these critters on crop plants. Admittedly, there have been times I thought of attaching a leash to one of these giants and treating it as a family pet, except for the fact that they only last as caterpillars for about a month before burrowing into the ground, where they transform to the pupal stage. Also, my wife threatened to lock me out of the house if I appeared with one in tow.

In late spring, the hornworms emerge as giant moths, called hawk moths or sphinx moths, with wing spans of four to five inches. The moths lay eggs on the underside of tomato leaves and the battle begins again.

Sometimes, I'll see a hornworm with white cocoons projecting from its back. These are the cocoons of a parasitic wasp that had inserted its eggs into the hornworm. The resulting larvae feed on the caterpillar's innards before emerging to spin the cocoons. Of course, the hornworm's life will be short and my tomato foliage will be spared. In such cases, I make no effort to destroy the caterpillars since I want to preserve the parasites to continue this natural method of pest control.

Speaking of natural pest control, I recently ran into (figuratively, not literally) a friend who was ranting about giant "bees" digging holes in his lawn. "The biggest bees I've ever seen" he said. With those two clues — giant "bee" and digging holes — I knew that he was referring to cicada killers. Now that's an ominous name for an insect that is actually very non-threatening, except to cicadas. Cicada killers are not bees, but solitary wasps, meaning that these wasps do not live in colonies as do other wasps. They derive their common name from the fact that the female of the species captures cicadas, which she hauls back to the burrow she previously dug. The cicada will serve as food for the wasp's larvae. Male cicada killers do not sting and the females will only do so if handled roughly. So, be kind to your cicada killers, and let nature take its course.

Here are some killer chores to do in your garden this week:

◘ Mix one part milk to two parts water in a spray bottle. This seemingly innocuous solution is a very effective anti-fungal spray that can be used to control powdery mildew on the leaves of phlox, beebalm, lilac, cucumbers and squash. Apply the spray about every 10 days.

◘ Watch for an uptick in the slug and snail population after this past week's wet weather. One technique to trap these pests is to sink a wide can or other steep-sided container into the soil with the top rim at soil level and fill it with a solution of sugar, yeast and water. If you need the solution to bake bread, use beer in the slug/snail trap.

◘ Use this newspaper to control weeds in the vegetable garden. "Huh?" I find that spreading a double sheet of newspaper on the ground between rows of vegetables and then placing straw over the paper is more effective in retarding weed growth than using straw alone. And you thought this paper was only good for lining the bottom of the bird cage.

◘ Prune out raspberry and blackberry canes that produced fruit this month. New canes coming up now will produce next year's crop of fruit. So-called everbearing raspberry varieties, such as "Heritage," will produce a crop of berries this fall and again early next summer on these new canes.

◘ Bury vegetable scraps, coffee grounds, egg shells and herbaceous garden debris in trenches dug in vacant areas of the garden. These materials will quickly decompose and enrich the soil.

◘ Focus your weeding priorities, whether in the vegetable or ornamental garden, on those that which are about to go to seed. If you need some incentive, consider the fact that one lambsquarters plant can produce as many as 72,000 seeds. If that didn't move you, know that one shepherd's purse weed may produce as many as 150,000 seeds. Yikes! I gotta go weed.

Companies call for projects that will connect neighbors and uplift communities across the U.S.

Spring Lawn Equipment: Get Ready for Backyarding in High Style This Year