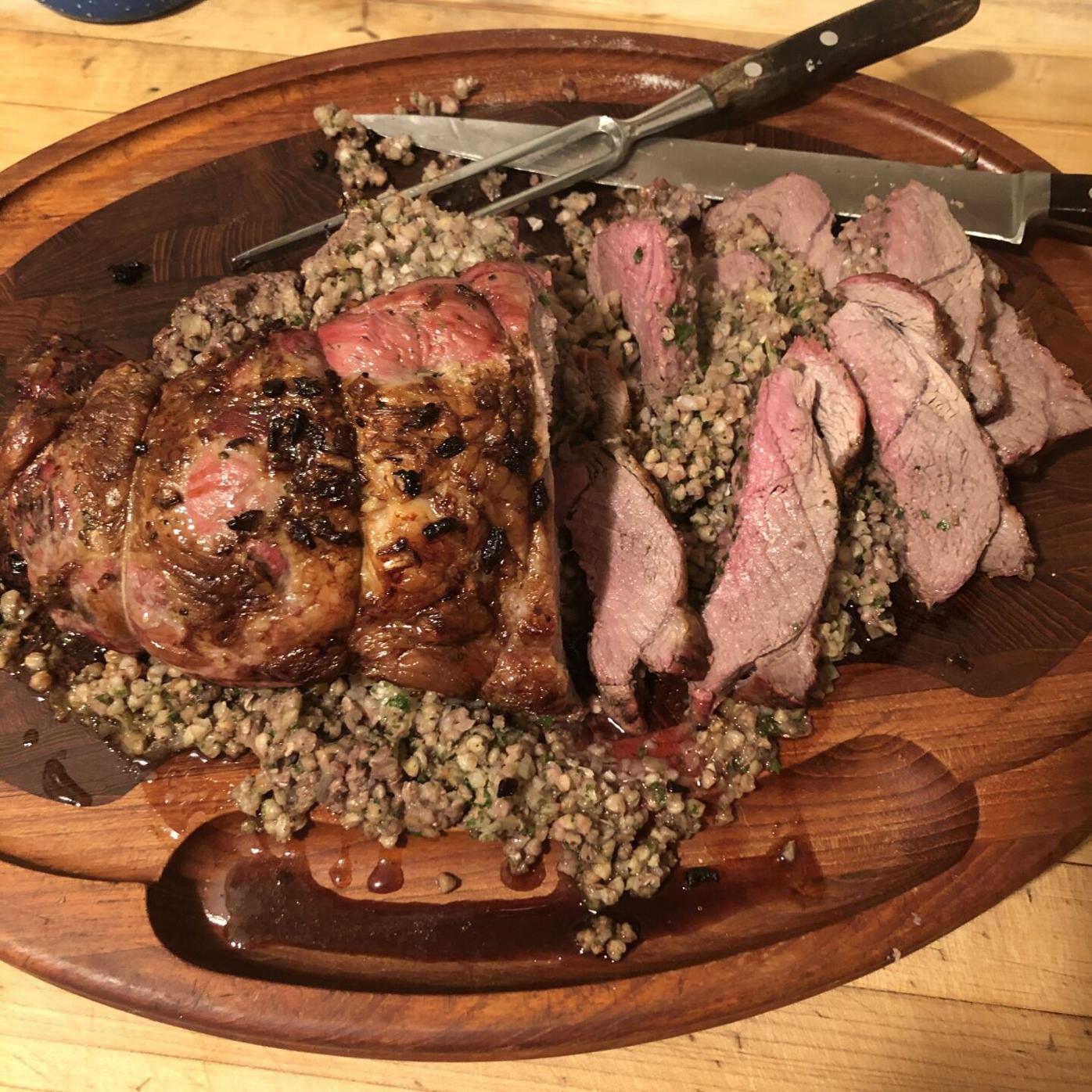 Roast Lamb with Kasha is a simple recipe that does require some time, but is well worth it. 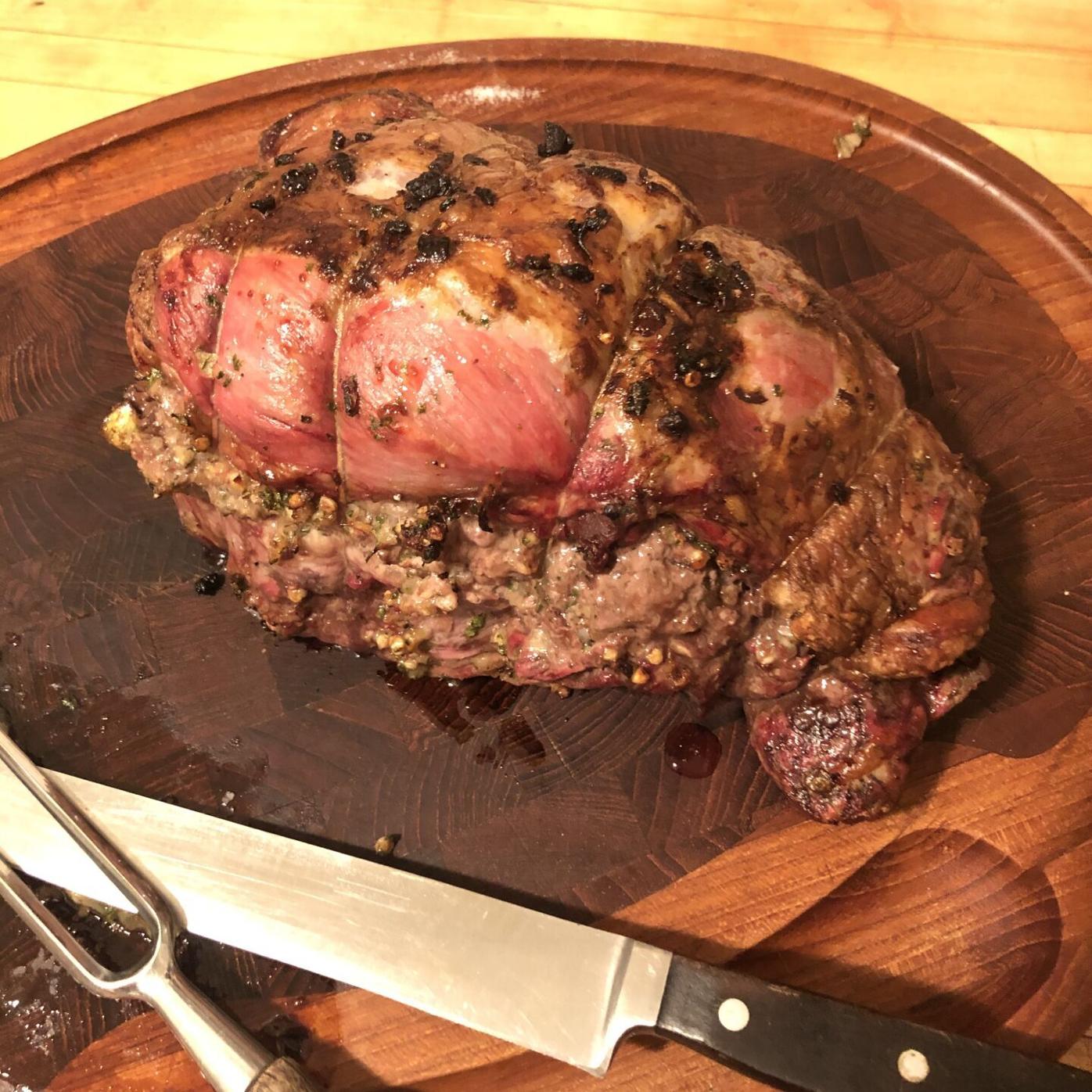 The lamb is held together with kitchen twine to help keep the buckwheat filling enclosed until it is ready to be served. 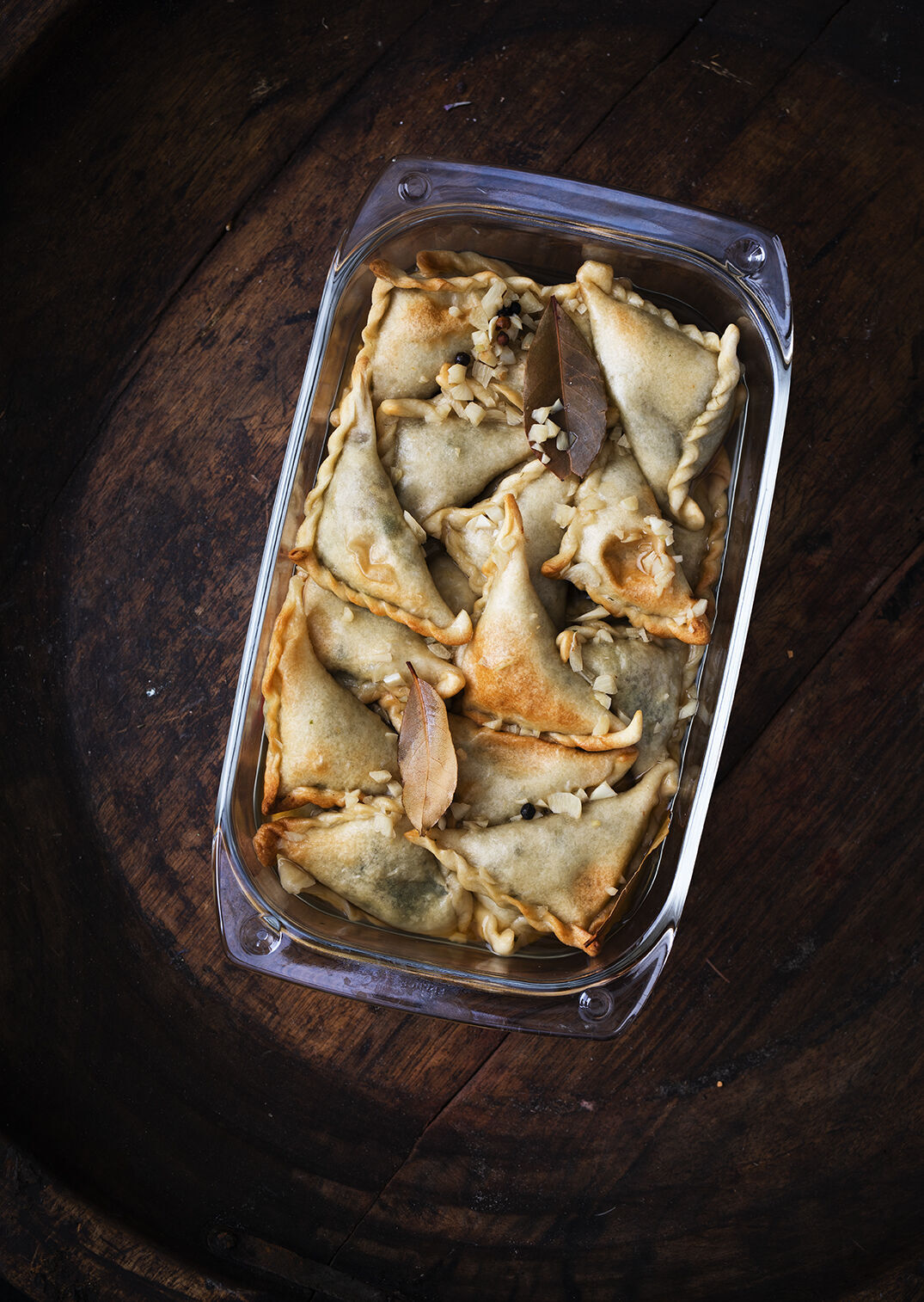 Dumplings with Mushrooms and Buckwheat are made with a simple homemade dough and steamed in the mushrooms' cooking water.

Before November 2020, I had never cooked with buckwheat groats.

I can't say before that, I really had a need for buckwheat groats in my pantry. But the desire to make two Russian dishes found me, in early December, out in the cold, during a pandemic, seeking out the elusive pseudocereal for two recipes from Darra Goldstein's latest Russian cookbook, "Beyond the North Wind: Russia in Recipes and Lore."

Weeks prior, I had interviewed Goldstein — an authority on Russian cuisine, founding editor of the food journal "Gastronomica" and professor emerita of Russian at Williams College — about her new cookbook. Released at the beginning of 2020, it was in the spotlight again as major publications rolled out their end-of-the-year "Top 10" lists. "Beyond the North Wind," had been named one of "10 of the Best Cookbooks in 2020" by Forbes and the Washington Post. Not to mention that it had already been part of The New York Times Book Review's list of "Best 2020 summer cookbooks" and named one of Amazon's "Best Cooking, Food and Wine Books of 2020 So Far."

My copy of "Beyond the North Wind," which I ordered online, arrived a few days before our phone interview. I had viewed the cookbook's online "preview pages" and was taken with Goldstein's tales of her travels in the Russian North in her quest to "dispel the false impressions that Russian food is heavy and bland, basically borscht and potatoes." I became enamored with two recipes that I was determined to make: Roast Lamb with Kasha and Dumplings with Mushrooms and Buckwheat. Stefan Wettainen's photograph of plump, steamed dumplings, which accompanies the recipe, further convinced me I needed to make them, despite my experience with Russian foods, in general, being limited to the beef stroganoff served up by my high school cafeteria.

Perhaps I was drawn to recipes because of the nature of the dishes; despite loving a decadent, gourmet dish when I dine out, my first love is "peasant food" — authentic flavors made with ingredients particular to a region and culture. And in this cookbook, Goldstein was sharing just that.

When Goldstein and I chatted, I gushed with enthusiasm about my desire to make both recipes. She cautioned that it might be difficult to find buckwheat groats locally, at this time of year, noting she'd found them with some success, but not always. (She later emailed me a link to an online Russian food store that carries them.) I wasn't phased, after all, it's not unusual to have to hunt down recipe ingredients in the Berkshires and particularly, in the Northern Berkshires, (I recently went looking for cardamom pods for a rice dish and finally found them in Pittsfield). And so, on a crisp winter night, my husband and I started searching locally for buckwheat groat. Four grocery stores later, we were still empty-handed and decided to throw in the proverbial towel, ending our search on the North Adams/Williamstown border.

I recently learned that if we had traveled a few minutes down the road to Wild Oats Co-Op in Williamstown, we would have ended our local quest in success. Grocery Manager Rob Peterson, assured me in a recent email, that Wild Oats not only sells raw organic buckwheat groats by the pound, but that the market also has online ordering and contactless pickup options. But alas, hindsight is 20/20 and my search ended with an order via the internet.

It was with great anticipation, two days later, when the buckwheat groats arrived, that I began preparing the roast lamb with kasha. This recipe is simple, despite it having multiple steps, and the outcome is a home filled with the aroma of buckwheat and a delicious lamb dish that quickly disappeared from the platter. (It's now a staple in my rotation of meat dishes.)

On the following Saturday, I decided to try my hand at making the dumplings, which is a little more labor intensive and lengthy as this recipe requires you to make the dough used for the dumplings. The effort is definitely worth it. Not only did my family enjoy this dish, but it would unexpectedly bring about a compliment from a stranger. Days after making the dumplings, my 20-year-old daughter returned from her part-time job to report a co-worker of Russian-descent had identified her reheated lunch by its aroma. The smells, she said, made her think of her grandmother and then, decided, she should make this dish as well.

(Recipe from "Beyond the North Wind by Darra Goldstein)

vegetable oil, for the pan

In a medium skillet, sauté the onion in the butter over low heat until golden, 8 to 10 minutes. Season it with 1/4 teaspoon of the salt and pepper. Set aside.

Bring the water to a boil with 1/4 teaspoon salt, then add the buckwheat. Simmer, covered, for 12 to 15 minutes, until the water has been absorbed. Stir in the sautéed onion and the parsley.

Preheat the oven to 400 F. Cut five 10-inch lengths of kitchen twine and set them aside. Open the lamb up to lie flat and pound it with a mallet to 1/2 inch thickness. Sprinkle the lamb with the remaining 1/2 teaspoon salt and pepper to taste. Spread about two-thirds of the buckwheat mixture over the meat, pressing down on it and leaving a 1-inch border. Bring the edges of the two long sides of the lamb up to meet in the center. Pinching the edges with the fingers of one hand, tie the meat with the twine in five places to enclose most of the filling. (It may help to have an extra set of hands here.) Don't worry if some spills out.

Remove the meat from the oven and allow it to sit for 10 minutes before carving into 2-inch slices. Spoon the buckwheat onto a serving platter and top with the sliced lamb. Serve immediately.

DUMPLINGS WITH MUSHROOMS AND BUCKWHEAT

(From "Beyond the North Wind," by Darra Goldstein)

4 tablespoons sunflower or other vegetable oil

3 tablespoons sunflower or other vegetable oil

To make the dough, place the flour and salt in a medium bowl and pour on the boiling water. Quickly add the oil and stir briskly till the dough holds together. Knead the dough a few times in the bowl with your hands, then cover the bowl and leave the dough to rest for at least 20 minutes and up to 1 hour.

While the dough rests, make the filling. Reconstitute the dried mushrooms by soaking them in the warm water for 30 minutes. Drain the mushrooms, reserving the water, and mince them. While the mushrooms are soaking, remove any coarse stems from the greens and rinse them well. Place them in a large pot and steam them, using the water clinging to the leaves, for 5 minutes. Squeeze all the liquid out and chop the greens finely. You should have about 1/2 cup. Set aside.

Place the buckwheat in a small saucepan with the cold water and a little salt. Simmer over low heat until the water is absorbed and the buckwheat is tender, about 15 minutes. Measure out 1/2 cup and set aside.

In a large skillet, sauté the onion in the oil over low heat until golden, about 8 minutes. Stir in the mushrooms, the greens, the 1/2 cup cooked buckwheat, a generous 1/2 teaspoon salt, the dill, and pepper to taste. Taste the filling for seasoning and set aside.

Preheat the oven to 350 F. Line two large baking sheets with parchment paper. Divide the dough into two balls. Leave one ball in the bowl, covered, while you work with the other. On a generously floured surface, roll out the dough into a very thin 12- by 16-inch rectangle, about 1/6-inch thick. Cut the dough into 2-inch squares. Place 1 teaspoon of the filling on each square. Bring one edge of the square diagonally over the filling to form a triangle. Pinch the edges tightly to seal. (You'll want to flour your hands well as the dough is sticky.) With your fingers, twist and turn the sealed edges to make decorative pleats. As each dumpling is made, place it on the prepared baking sheet. Repeat with the second ball of dough.

Bake the dumplings for 18 minutes, until they are dry and just beginning to take on color.

While the dumplings are baking, bring the reserved mushroom water to a boil with the bay leaves, peppercorns, garlic, and a teaspoon of salt. Simmer, covered, for 10 minutes. Transfer the dumplings to a shallow 2-quart ovenproof baking dish, arranging them in two layers. Pour on the hot mushroom broth. Cover the dish tightly with aluminum foil and return the dumplings to the oven to steam for 15 minutes. They will absorb almost all of the mushroom broth.

Serve the dumplings hot, sprinkled with the parsley. Offer sour cream on the side, if desired.