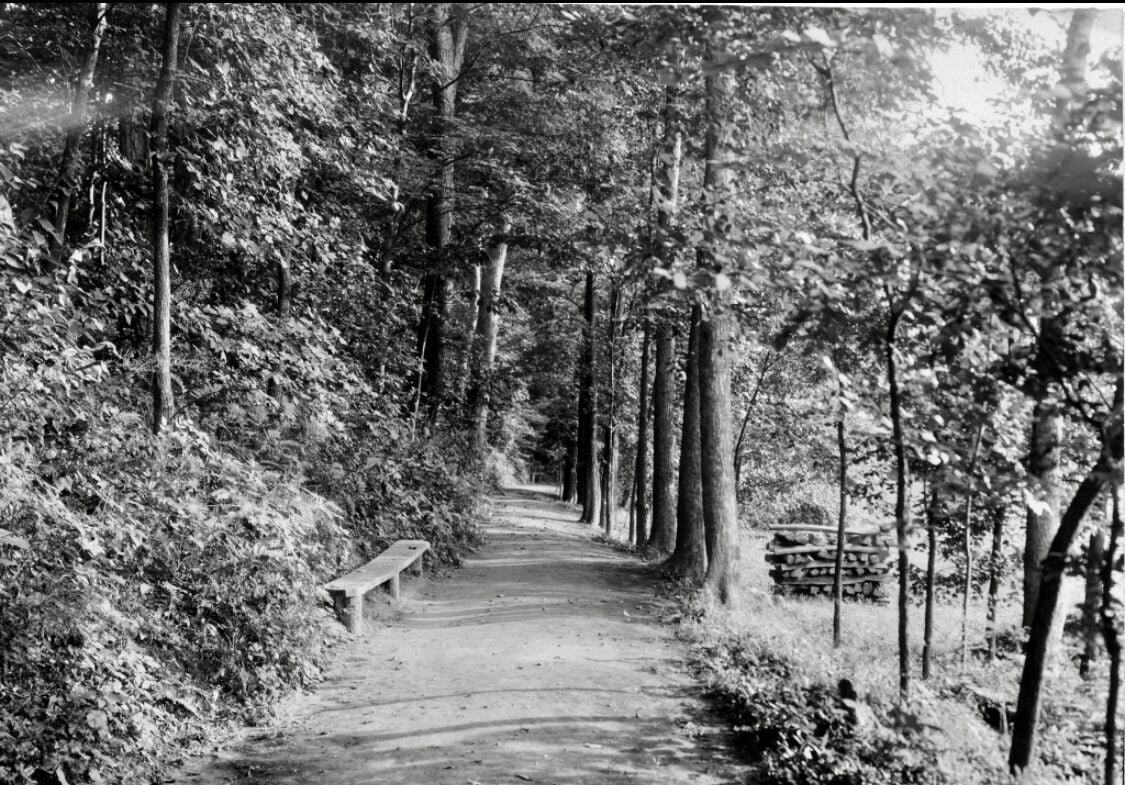 The garden walk near the Retreat Gardens in Brattleboro.

The garden walk near the Retreat Gardens in Brattleboro.

In the 1830s most people in New England lived on farms and grew their own food. By 1880 most New Englanders lived in cities, bought their food, and worked for wages. This shift from agriculture to industry, and all of the changes in lifestyle that came with it, caused many people to examine their connection with the natural world.

Here in Brattleboro the rise in manufacturing was seen in the progress of the Estey Organ Company. In the 1850s the business had 8 employees. By the 1880s there were over 200 people constructing organs in the Estey complex on Birge Street.

In the 1870s Jacob Estey attempted to humanize this rise of mechanization by creating Esteyville. A neighborhood was mapped out on the hillside just south of the Estey manufacturing site. Individual building lots were established with the intent of supporting workers in their pursuit of private home ownership. The neighborhood was developed on a human scale.

A schoolhouse was built, the company created a small park, the residents established a church and the company built a bandstand for neighborhood gatherings.

According to the book “Manufacturing the Muse” by Dennis Waring, ...”when conditions within large, noisy, unsanitary, and often dangerous urban factory systems were creating deep class schisms and crises of impersonality, Estey’s workers were able to retain their identity and sense of self-worth more easily because of the intimate village atmosphere.”

The Vermont Asylum for the Insane, (now Brattleboro Retreat), opened in 1836. The hospital’s approach was based upon Quaker principles of care embedded within the moral treatment of its patients. The emphasis was on a family-like setting in natural surroundings. Patients were to be treated with warmth and respect. Treatment included good food, daily outdoor exercise, cultural activities and purposeful work tailored to the individual.

The original goal of the hospital was to serve up to 300 patients. However, the Asylum Trustees had lobbied for legislative funding to help establish the hospital and had entered into an agreement to accept Vermont state-assigned patients. By 1880 there were almost 450 patients and concerns about overcrowding. Despite this pressure the hospital continued to reach for its original patient-friendly goals.

More than 20 miles of nature trails, footpaths and carriage roads were established on hospital property. The Asylum farm had grown with the hospital so that it produced most of the food eaten by the patients. There was a dairy herd, beef cattle, vegetable gardens, fruit orchards, poultry flocks and a piggery. Patients also worked on the farm.

In 1880 the hospital joined with the town and built Cedar Street. The 30-acre tract of land between the hospital and Cedar Street was developed into a park for use by patients and employees. A Boston landscaper was hired to beautify the setting and slopes were graded to establish plateaus for outdoor games and activities.

Dr. Joseph Draper began as the Asylum’s superintendent in 1873. His interest in getting patients outdoors and engaged in recreational activities continued earlier hospital practices. In 1881 Dr. Draper and his wife went on a three month vacation to Europe. He visited mental hospitals in Scotland and England and came back with proposals to establish summer retreats for patients that would remove them from the growing institutional atmosphere of the Asylum.

Summer retreat buildings were established away from the hospital for both male and female patients. Small groups of patients were rotated through the Retreat buildings during the summer months. In 1885 the hospital began a camping program and a permanent shelter was established on a ridge south of the ice pond. Groups of 15 or less would hike to the camping area for the day. A carriage road was built so more infirm patients could also participate. Despite the pressures of increased patient populations and society’s move towards mechanization, the Asylum continued to create opportunities for patients to connect with nature on a human scale.

Dr. Draper also came back from Europe with the idea that a tower similar to those he saw on the continent would be a good building project for patients. The tower would be the capstone of the park established on the hillside. Draper was a good friend of local businessman George Crowell.

In 1882, land developer and businessman George Crowell bought 30 acres of land on the hill next to Asylum Park. Crowell renamed the property Chestnut Hill and developed a reservoir to supply a portion of the town with water and fire hydrants. Crowell also created a park for public use.

In 1884 the Chestnut Hill reservoir began operation and Highland Park was presented to Brattleboro as a place where the community could come and enjoy the beauty of the outdoors. The reservoir served many in the eastern portion of town, including Main Street.

The park grounds were well landscaped and maintained by Crowell’s employees. Just north of the reservoir Crowell built a log cabin designed for children to enjoy. A “crow’s nest” pavilion was built to the east of the reservoir for birdwatchers. A bandstand was also built on a rise in the northeast section of the park and a three story “cottage” was also constructed southwest of the reservoir.

Crowell invited the public to visit Highland Park and use it as a free local resource. Clay croquet grounds were located near the bandstand. Swings were hung from trees near the cottage. Young “Fresh Air” visitors and city dwellers were welcomed to the cottage during summer months, sponsored by local religious organizations.

While Crowell was a land developer by trade, he believed that the stresses associated with an increased mechanization of society could find an anecdote in the natural spaces of public parks.

The Brattleboro Hydropathic Institution, known locally as the Wesselhoeft Water Cure, opened in 1845 on Elliot Street. The Water Cure promoted a healthy lifestyle of diet and exercise. It was thought that many of the ailments facing people during the rise of industrialization stemmed from poor medical treatments that caused more harm than cure. Dr. Wesselhoeft thought pure water applied inside and outside of a patient could wash away many diseases. He felt that much of the sickness in society came from laziness, lack of exercise and what we would call “junk food” today. Daily hikes from Elliot Street to Cold Spring, on Asylum property, were part of the healthy Water Cure routine.

Around 1848 a comfortable path to the top of Mt. Wantastiquet was established by local man Robert Pender and people from the Water Cure. Pender even built a three-story log house on the summit that was later destroyed by fire in 1860. The cabin served as a shelter for those who hiked or rode a carriage to the top of the mountain. Dr. Wesselhoeft believed in the curing power of the outdoor environment.

The pathway to Wantastiquet’s summit that was built during the heyday of the Water Cure fell into disrepair after the Civil War. In 1891, local outdoor enthusiasts joined together to revitalize and widen the path so carriages could easily travel up and down the mountain. Two local men, Walter Childs and David Perry, spearheaded the effort and the summit of Mt. Wantastiquet became a weather reporting station for the New England Meteorological Society.

As the Industrial Age grew throughout New England, and people became less connected with the outdoor environment, there were local leaders in the Brattleboro area who worked to provide the community with human scale connections to the natural world.