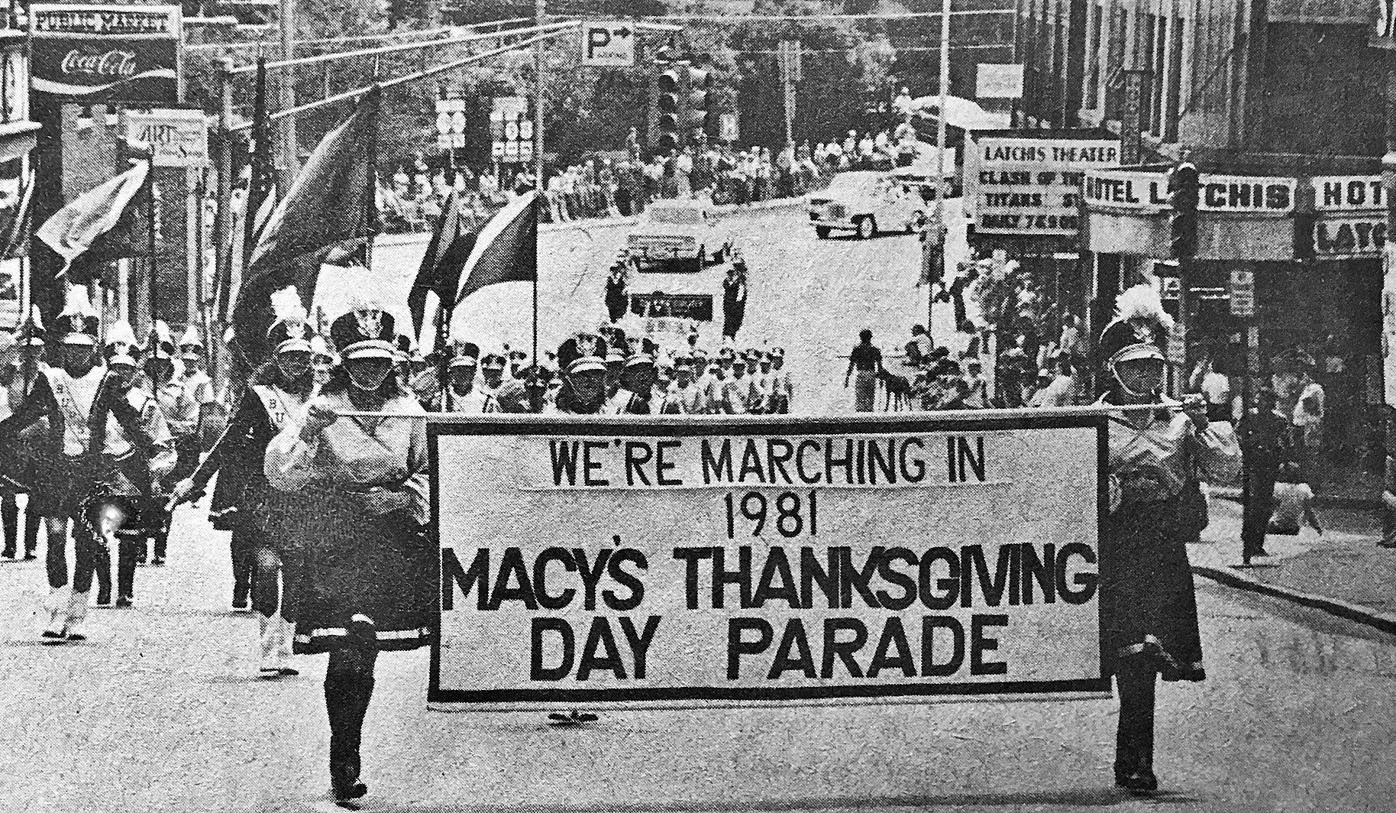 The Brattleboro Union High School Band marches through downtown Brattleboro to spread the news about being in the Macy’s Thanksgiving Day parade in New York City in 1981.

The Brattleboro Union High School Band marches through downtown Brattleboro to spread the news about being in the Macy’s Thanksgiving Day parade in New York City in 1981.

BRATTLEBORO — Forty years ago the Brattleboro Union High School Marching Band was riding an unparalleled level of success having won numerous local, state and regional band contests and having been named the finest marching band in Vermont. The band was soon to be recognized as Vermont’s representative to the annual Macy’s Thanksgiving Day Parade in New York City.

It was not always this way. According to Jane Grass Hurley, by the 1970s, “The band was going downhill. I was contacted by the BUHS Principal to begin a search for a new band director. At the time I was working with the BUHS majorettes. I’m the one that got Bob Simonds here in the first place.”

She adds, “I recommended Bob because my brother-in-law was superintendent of schools in the Littleton, New Hampshire area where Bob was teaching at the time. And Bob brought his little band to our Alumni Day Parade. And I thought they were great. And when I got the call asking if I knew of anybody to be a high school band director, I said, ‘Yes, I do.’ I thought he was great. I didn’t know who he was at the time but he ended up being Bob Simonds.”

Grass Hurley was from Long Island and taught for decades, first there and then in Brattleboro. She had a stellar reputation for outstanding teaching, both in private practice and as a volunteer with BUHS. She was directing the BUHS majorettes. They would be an integral part of the Macy’s Parade because they were out front, nine girls.

Bob Simonds came to Brattleboro Union High School as its new band director in 1973, asking his 35 band members, “What do you want for your band?” One band member answered, “Not to be laughed at, to be proud of our band, not laughed at.”

Simonds saw what was to be his first BUHS band at the annual 4th of July Parade in 1973. There were “about seven band members and a smattering of adult musicians with them. I knew what the challenge would be,” says Simonds.

Simonds was a demanding instructor. He says, “I earn the respect of my students by fulfilling my promises to them and I expect them to fulfill my expectations of them. I didn’t tear anybody down and just said no. There was mutual respect between me and the band members. I respected them and they respected me, always.”

Simonds was band director at BUHS for nine years.

There were only 35 band members for the first football game in 1973, a year when the Colonel football team won the Division I football championship over Bellows Free Academy 28-0, played at the University of Vermont’s Centennial Field. Simonds’ BUHS Band performed at halftime of that championship game. But it did not start out that way.

At the start of the season Simonds says about his band, “They weren’t a very quick band at that time. So for the national anthem I stood right below the flag pole. And I was the one that played the national anthem. I had told them that I wouldn’t ever put them on the field unless they were ready to play. They improved that year, very much.”

By the end of the decade the BUHS Band was widely recognized for its excellence, a committee was formed to support the band, and Tom May offered to Simonds, “why don’t you apply to be chosen to participate in the Macy’s Thanksgiving Day Parade?”

Simonds’ initial thought was, “no way.” But the idea grew on him and the application was sent. The BUHS Band was chosen for the 1981 Thanksgiving Day Parade. Simonds was stunned.

Says May, “We did it with our music department. We had a lot of people, a lot of parents.”

A fundraising campaign was mounted and raised in the vicinity of $40,000.

May adds, “We didn’t take one penny of town taxes. But that was a lot of work. The kids aren’t going to put it together, the parents did. Everybody was helping.” Among the committee members were John Carnahan, Lynn Corum, Martha O’Connor, Lisa Speno and Don Webster.

Simonds was contacted by “a guy with NBC.” Simonds said, “Is it because we’re from, you know, a small state? The NBC guy was actually insulted.” He said, “In no way would we have chosen you because of that! We chose you because you were one of 12 best bands that we received.”

Side by side the committee worked to make the trip economically viable; Jane Grass Hurley worked with the majorettes; Bruce Noble, a 1979 BUHS graduate and previous band member, prepared the flag corps; and Simonds prepared the band.

According to the December 2, 1981 Town Crier, Noble said upon meeting Simonds for the first time, “He asked for our full cooperation and trust, and promised us pride in return. Music is a disciplined art. The only way to get perfection or precision is through discipline.”

Jane Grass Hurley, Bruce Noble and Bob Simonds were all disciplinarians. They worked well together.

Sue Alexander Christensen, a member of Simonds’ band says, “As a freshman I knew of Mr. Simonds, and his fierceness for perfection. I was a little intimidated in the very beginning, but he was not just about perfection. He also wanted the best in each one of us, which I thought was really wonderful. And the biggest thing I can remember is walking into band and there was a sign on the chalkboard. And the sign said, ‘To be on time is to be late. To be early is to be on time.’ And that has stuck with me.

“I remember the practices before going out for concerts. He wanted us to be as good as we could be, for ourselves and the people we were playing for. He was instilling in us to be good, really great for ourselves and building people that were going to go out into society and make a difference in the world. It’s glaringly obvious that he did a really good job with all of us involved in band. And that’s why we were able to get to Macy’s Thanksgiving Day Parade. He worked so hard to make us be the best we could be, the best of ourselves.

“When Mr. Simonds blew his whistle, we snapped to attention. I mean, it does give me chills even to think about it. Everything had to be polished and practiced and if it wasn’t perfect we were going to stay and we were going to do it until it was perfect, and I can remember doing band camp in the summer with him and everything was as strict. When you’re that age, you’re thinking, ‘I want to drink. Stop making me stand with my feet in a perfect V and all this stuff.’ But that’s why we ended up being where we were. And I’d like to think that’s some of who I am because Mr. Simonds instilled that in me. That’s pretty incredible that one person could touch so many students’ lives.

“He drilled into us that we had to act as one. When we got in the field that is what we did. And you couldn’t have a ‘maybe’ white shirt. It needed to be crisp and white, unique. And because he wanted us to know, we’re important, and we need to make sure we look the best we can because we were representing not just the school, not just Mr. Simonds, not just the band, but we’re representing ourselves. And I think we learned how to put our best foot forward, quite literally.

“I wish you could see I’ve got goose skin right now. Because just thinking about it, he would always march with us, didn’t matter the weather, he would march right with us.

“I watch Macy’s Thanksgiving Day Parade and it still makes me cry. It was an amazing time of our lives. I can still smell the smells of New York City. I can still remember the pavement that we stopped on in front of Macy’s and did our show. I remember.”

The week of Thanksgiving 1981 the BUHS band boarded three Vermont Transit buses, were sent off by a large crowd of supporters, and were escorted by the Brattleboro Fire and Rescue department and Vermont State Police to the Vermont — Massachusetts State line. Upon return, a similar escort at the Vermont-Massachusetts state line took the band back into downtown Brattleboro.

After beginning the frigid day with a 4 a.m. practice, then marching three miles to the parade start, the performance was flawless. The band played “On Broadway” and “Don’t Rain On My Parade.”

Band members went to a Broadway show, to the Lincoln Center, the Statue of Liberty, Radio City Music Hall and to the top of the Twin Towers of the World Trade Center.

In 1996, Bob Simonds was chosen as the Vermont Music Educator of the Year.

BUHS remains the only Vermont band ever to participate in this parade.

The BUHS music webpage (https://sites.google.com/a/wsesu.org/buhs-band/home) begins with this:

The Brattleboro Union High School Band has a long and proud history of excellence. Throughout the existence of BUHS, the bands have been highly respected ensembles and a major part of the culture of the school and community.

In the 1970s, director Robert Simonds brought the band to statewide and national attention, largely through a focus on the marching band. The band marched very frequently and with great distinction. This era reached its apex in 1981, when the BUHS Band marched in the Macy’s Thanksgiving Day Parade.

You can see video of the experience here: https://www.youtube.com/watch?v=T3SOCeLld6M&amp;sns=em