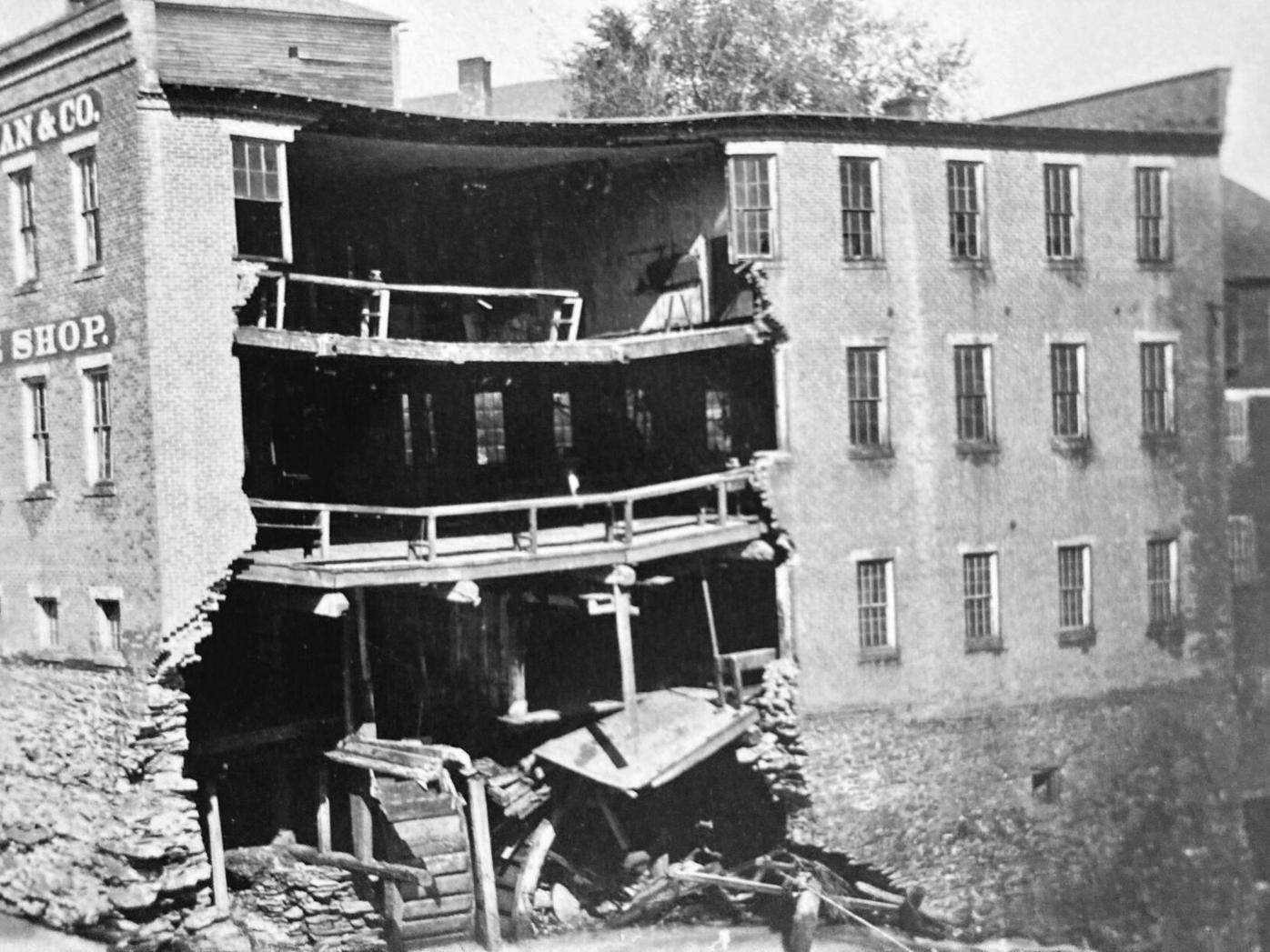 The Hines Newman and Company lost its water wheel during the 1869 Whetstone Brook flood. The machine shop was located on the north side of the Whetstone Brook 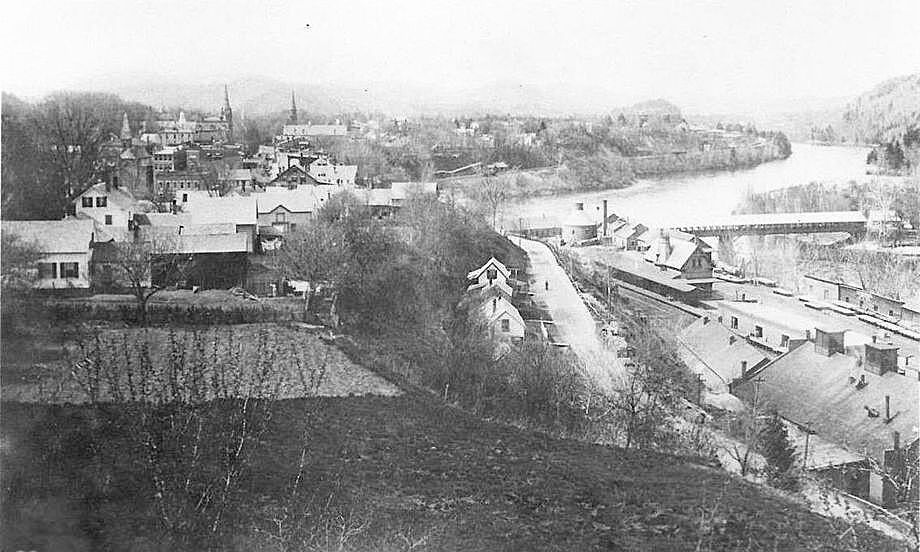 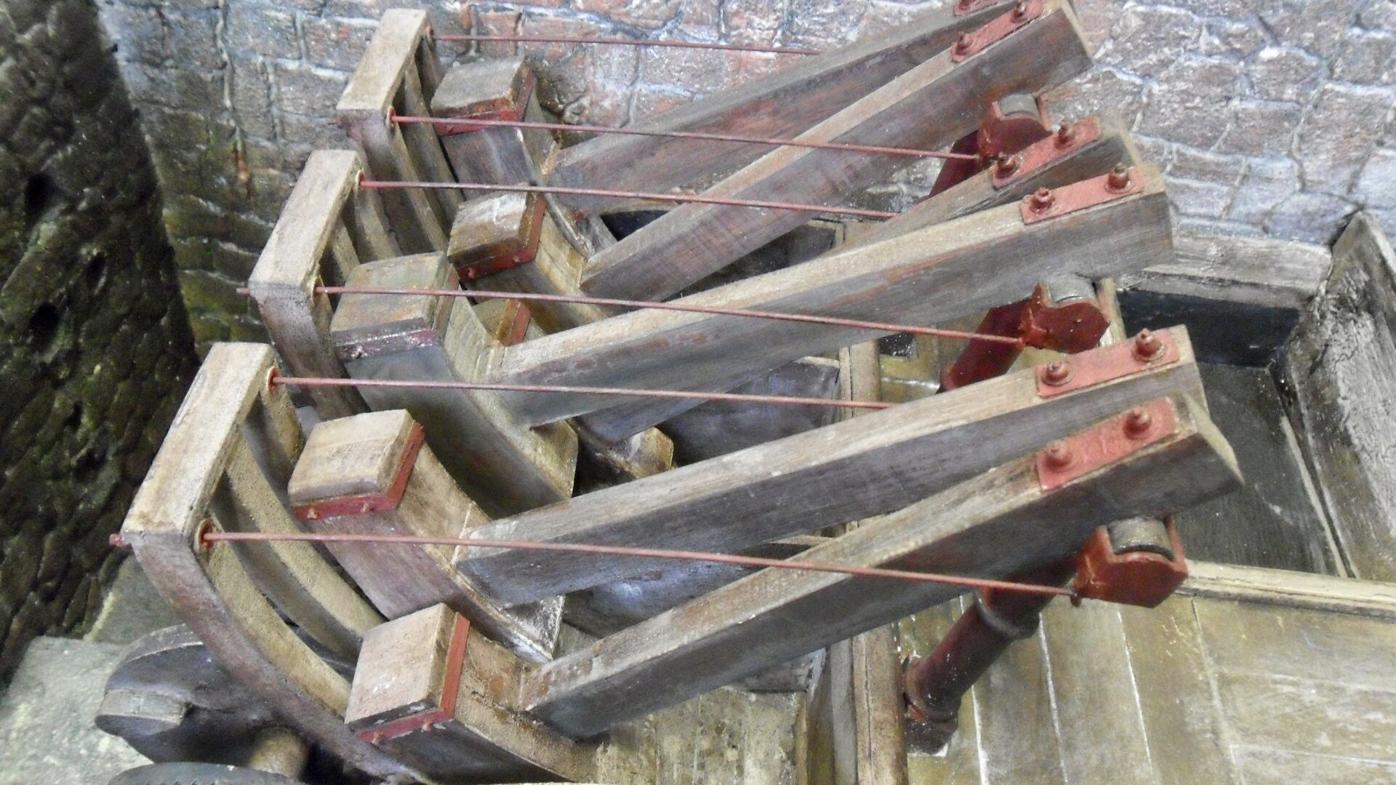 Wool fulling mill machinery similar to what was used to clean and tighten wool fabric in Clark's Fulling Mill.

The Hines Newman and Company lost its water wheel during the 1869 Whetstone Brook flood. The machine shop was located on the north side of the Whetstone Brook

Wool fulling mill machinery similar to what was used to clean and tighten wool fabric in Clark's Fulling Mill.

The Clarks moved to Brattleboro in the 1780s. Joseph Clark bought property from the widow of New Hampshire governor Benning Wentworth and, at one time, owned most of the land on the south side of the Whetstone Brook to the Vernon and Guilford town lines. In 1782 he built a wool processing mill on Whetstone Brook. The mill cleaned and carded wool for cloth production. In 1811 Clark was one of the investors in the first paper mill built in Brattleboro. It was also located on Whetstone Brook.

The Clarks lived at the spot where Main Street turns into South Main Street. At the time it was all known as the Great River Road. The road followed a Native American trail that paralleled the Connecticut River.

In the 1780s it was Joseph Clark who helped straighten out the controversial land disputes in Brattleboro. Many of the first European landowners in Brattleboro had declared their loyalty to the colony of New York. When the newly declared Republic of Vermont said it would honor New Hampshire land titles but not New York claims, there was a general panic as the town had been organized under the authority of New York. Joseph Clark traveled to Portsmouth, N.H. and purchased New Hampshire land titles from Governor Wentworth’s widow and then sold them to the established landowners of Brattleboro. This made everything legal for those who were willing and able to buy land titles from Clark.

ARNOLD HINESAs the years went on the location of Clark’s wool processing mill became the Hines, Newman and Company factory. Arnold Hines was born in Guilford in 1805. Arnold’s father had been John Holbrook’s millwright and had maintained, repaired and reconfigured the machinery in many of the early mills along the Whetstone Brook.

While a young man, Arnold Hines moved to Brattleboro and continued in the footsteps of his father. In 1838 Hines and his business partner, George Newman, bought the Thomas and Woodcock paper making machinery business. This business occupied the mill area along the Whetstone Brook that had previously been the Clark wool processing mill.

Hines and Newman quickly grew the business into one of the most prominent paper making machinery factories in the country. Paper making machinery from their factory was shipped to mills in Canada, Mexico and across the United States. Arnold Hines was the “machinery” mind, while Newman focused on marketing, shipping and the “numbers.” The machine shop expanded beyond paper making machinery to other types of machinery and it also functioned as an iron foundry. More than 20 men worked in the mill.

Both Hines and Newman became important members of the Brattleboro community. Newman served as lister, town treasurer and select board member, and for two years, 1848 to 1849, represented the town in the state legislature. Hines was very involved in the local militia and became a colonel in the Vermont State Militia. He was a leader in the local fire department and served on the school board.

“The Democratic Party has for years been in the possession, body and soul, of the Slave power. The Whig Party was never a unit against this power and it was the unfaithfulness of the Southern wing of that party that made it possible to repeal the Missouri Compromise. The American Party has proved equally untrustworthy, for more than one half of its Southern representatives in Congress have voted in favor of the abominable institution of slavery in the recently formed territory of Kansas.”

Arnold Hines became ill in the early 1860s. He knew his health was failing and in 1861 he retired from business. He was suffering from an inoperable fast-growing tumor in his abdomen. Arnold Hines died in April 1862. An examination of his body after his death revealed that the tumor growing inside him had reached 78 pounds.

Arnold Hines was buried in Prospect Hill Cemetery in 1862. The Clark family had begun the cemetery 76 years earlier and Hines spent much of his adult life expanding the cemetery to accommodate the growing community.

Hines also spent most of his adult life running his business at the same Whetstone Brook location as the earlier Clark wool processing mill. The families were both involved in the local paper making process, but at different times.

Arnold Hines saw conflict between those who supported slavery and those who opposed it. He left the Democratic Party and helped form the local Republican Party to oppose the spread of slavery in the United States. Years earlier Joseph Clark saw conflict between those in Brattleboro who wanted to be an independent republic and those who wanted to be part of New York. He negotiated a land purchase from the widow of Benning Wentworth in order to help resolve the conflict. Without knowing one another, the Clarks and Hines were similar to one another in many ways.