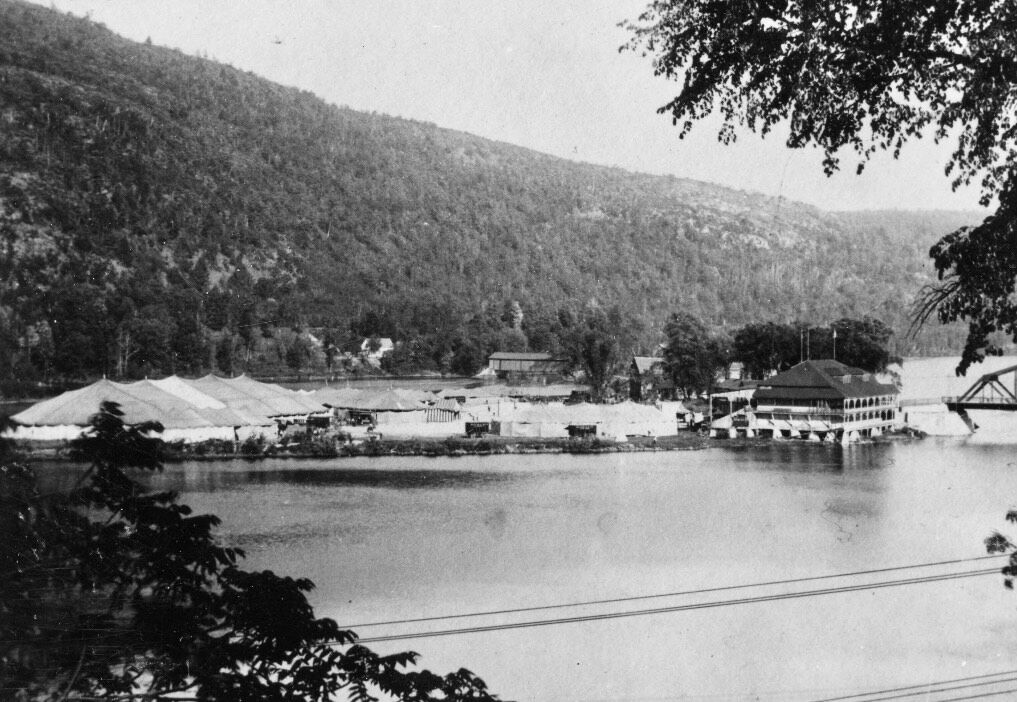 Circus on the island with Island Park Pavilion, 1922.

The Retreat Meadows levee and water pumping station were built to control high water during flooding season after the Vernon Dam was completed in 1909 (it didn't work). 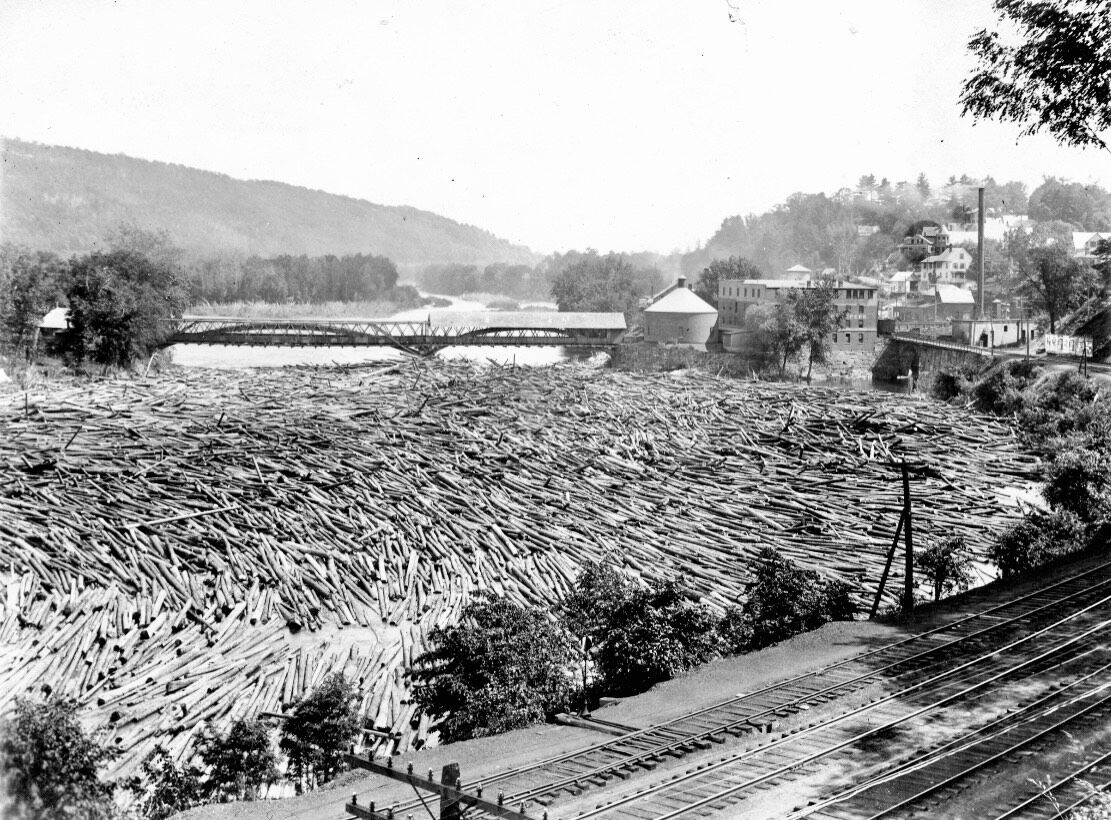 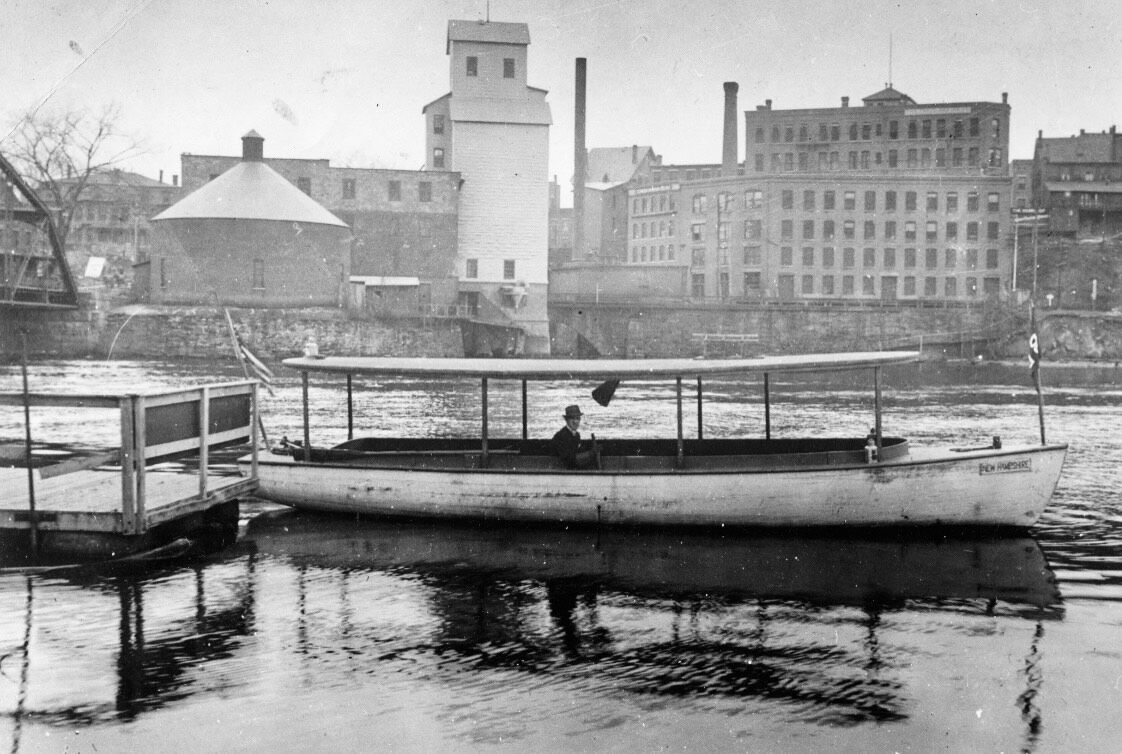 Circus on the island with Island Park Pavilion, 1922.

The Retreat Meadows levee and water pumping station were built to control high water during flooding season after the Vernon Dam was completed in 1909 (it didn't work).

Someone new to the area recently asked why the Connecticut River is not more of a focal point in the community. The towering buildings on Main Street look like they’ve turned their backs to the river and the train tracks separate the public from easy access to the riverbank.

Over the years the Connecticut River has been many things for those who have lived along the waterway. When the Abenaki were the only people here the river was used for transportation, trade, cultural gatherings, and food. The river was then known as Wantastegok and native crops were grown along the riverbanks. For the Abenaki the river is much more than recreation and entertainment, it is the basis of indigenous society.

Fort Dummer, built in 1724, was the first European settlement in the area. The fort was constructed along the Connecticut River about one mile south of present day Main Street. It was a militarized blockhouse built for trade, and to continue the northward English colonization of the river valley.

Europeans found that settling along the river was dangerous. There is evidence that Abenaki warriors fought fiercely to defend their homelands. Native attacks occurred at the Putney Fort, English settlements south of Fort Dummer and at the present Retreat Farm. All of these areas were former Abenaki lands that had been seized by English colonizers along the riverside.

English settlers continued to expand in Abenaki lands and built on hills away from major waterways. The English found that they were not attacked as readily by Abenaki war parties if they didn’t occupy land that had previously been managed by the Abenaki.

After the French and Indian War ended, the town of Brattleboro began on Meetinghouse Hill, about two miles west of the Connecticut River. The hill was a more easily defensible location than the river. As time went on the town developed along Whetstone Brook. What is now the village of West Brattleboro was the first commercial center of town.

In the 1790s a dam and canal system was built in Turners Falls, Massachusetts. This allowed Brattleboro flat boats to travel up and down the Connecticut River all the way to Hartford, Connecticut. From Hartford larger boats could then reach the Atlantic Ocean and travel as far as the West Indies. Brattleboro’s center of commerce and trade began to shift from the West Village to the growing East Village. These dams also meant the end of migratory salmon and shad runs up the Connecticut River.

By 1800 the Connecticut River was the main trade route for Brattleboro merchants and manufacturers. What is now Main Street, a landing for flat boats was established just north of where the Whetstone Brook feeds into the Connecticut River. The landing was just behind a general store and warehouse owned by John Holbrook. Holbrook owned one of the largest flat boats and made his fortune transporting goods up and down the river. That fortune would help finance the development of the East Village commercial district.

It was reported that the Connecticut River Valley population doubled between 1800 and 1810 as the canals at Holyoke and Turners Falls in Massachusetts and Bellows Falls, Vt., became economic engines that turned the river into a transportation super highway.

As time went on, flat boat trade was supplemented with steamboats. Steamboats were faster, more powerful and could transport more goods. In 1826 the Barnet was the first steamboat to land in Brattleboro.

In 1849 the railroad arrived. The tracks ran along the west bank of the Connecticut River and effectively cut the town off from access to the waterway. The boat landing near the Whetstone Brook disappeared and goods were then transported by rail.

The great logging runs on the Connecticut River began around this time as well. Logging companies on both sides of the Connecticut River harvested trees and floated them down the river to saw mills in Massachusetts. The log drives would begin in late March and end in early September. This disrupted other uses of the river for long stretches of time.

By the early 1900s there were too many competing interests for the waterway. Tourist companies wanted to operate their motor boats, factories and mills wanted to use the waterpower to run their businesses, landowners wanted to protect their buildings along the shore from log damage, and power companies wanted to build dams to provide electricity. Extended logging along the river valley had increased the impact of seasonal floods. A little over 100 years ago the river served too many masters and could not meet everyone’s needs.

The logging runs ended in 1915. The creation of dams, like the Vernon Dam in 1909, caused a general rising of the river, and contributed to increased flood threats. Floods in the 1920s and 1930s caused severe damage and loss of life. The river, once Brattleboro’s commercial driver, had become a dangerous natural adversary.

Beginning in the late 1700s, economic development along the river was a focal point of community growth. Mills and factories used the river for power and also as a waste disposal system. Towns and cities used the river as a dumping site and also piped sewage into the waterway.

By the 1900s the river became environmentally unsafe. The river, which had been the lifeblood of the community, was now a threat. In 1948 the Federal Water Pollution Control Act began the process of working to clean the heavily polluted river. In 1952 the Connecticut River Watershed Council was formed to address the pollution problems. In the 1950s the river was called “America’s best landscaped sewer.”

In December 1967, Brattleboro’s first wastewater treatment plant opened. In the subsequent decades it has continued to be upgraded and expanded. Fortunately, pollution does not directly flow into the river as it once did. According to the Connecticut River Conservancy website, “is it clean,” river water tests in the area typically score Class B, which means it is safe for swimming and fishing.

In 1864 George Perkins Marsh, who grew up in the Connecticut River Watershed wrote, “Man has too long forgotten that the earth was given to him for usufruct alone, not for consumption, still less for profligate waste.” In his book, “Man and Nature,” Marsh wrote about the devastation of watershed fisheries brought about by extensive logging and farming. Usufruct is a legal term which is similar to the Abenaki approach to natural resource management. It means the right to enjoy and benefit from the use and advantages of a natural resource without destroying or wasting the resource.

To answer the newcomer’s question, the Connecticut River has always served multiple purposes but Brattleboro has not consistently applied the concept of Usufruct when making decisions about the river’s uses. Instead, competing interests have limited access, damaged fisheries, altered water flow, and threatened wildlife while meeting the needs of power companies, commercial industries and railroad owners. These decisions may have been made to improve the town’s economy, but a consequence has been a diminishing of the river’s positive impact on the Brattleboro community.