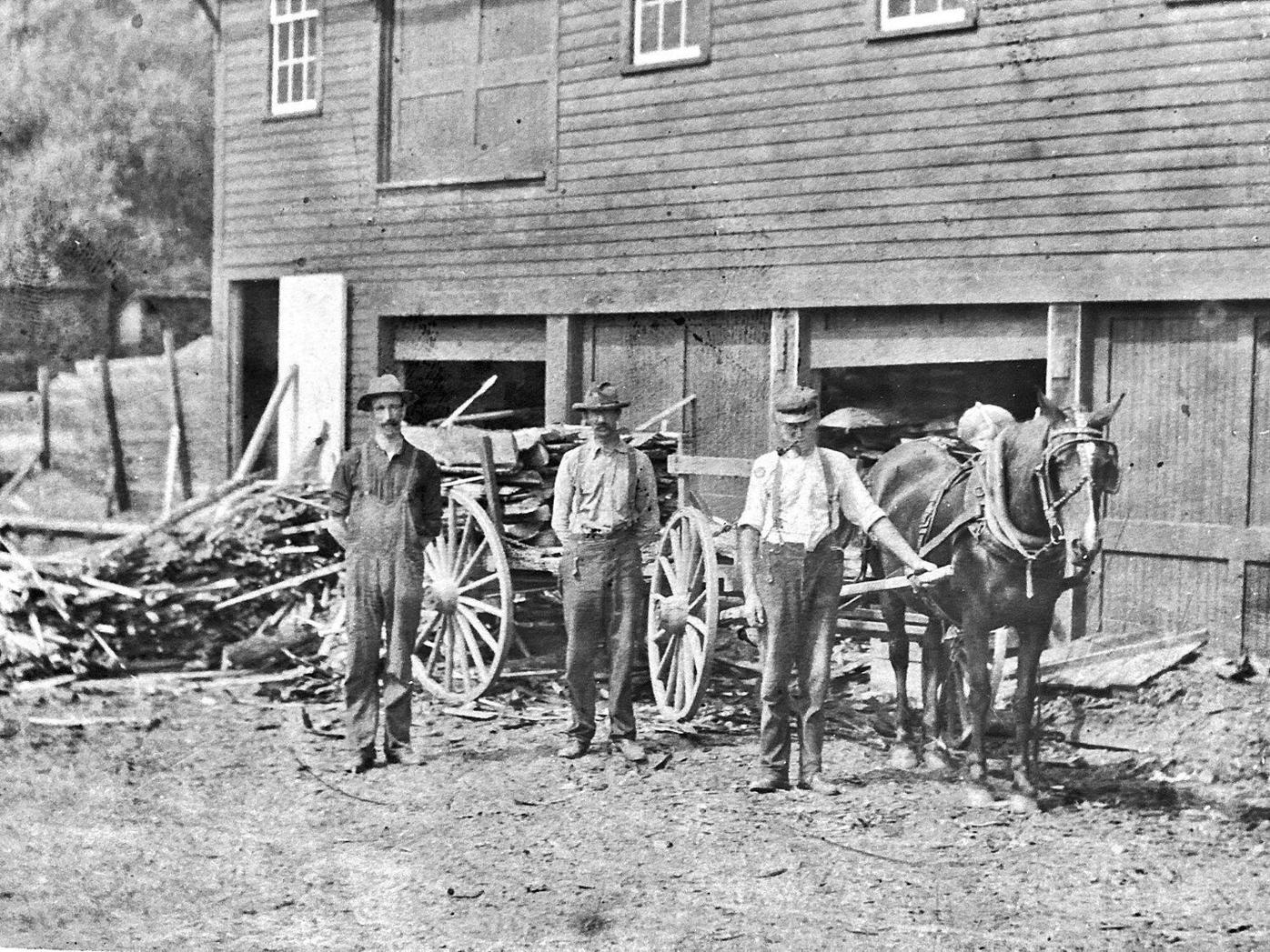 Holden and Martin sawmill at end of Birge Street. 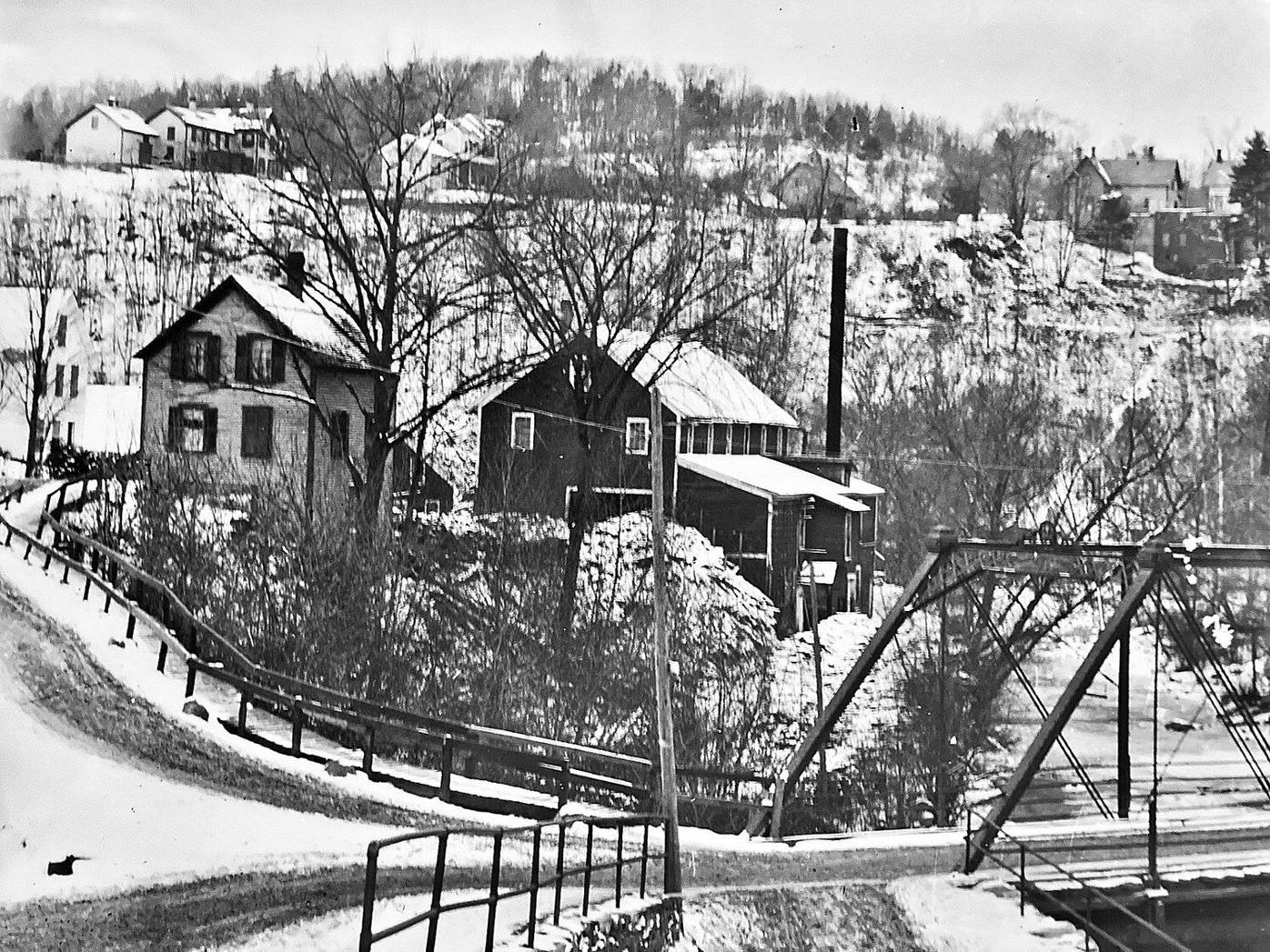 The Fletcher Sawmill, purchased by Holden and Martin in 1904, had been converted from Brattleboro Woolen Mill. Photo from 1890s, end of Birge St. 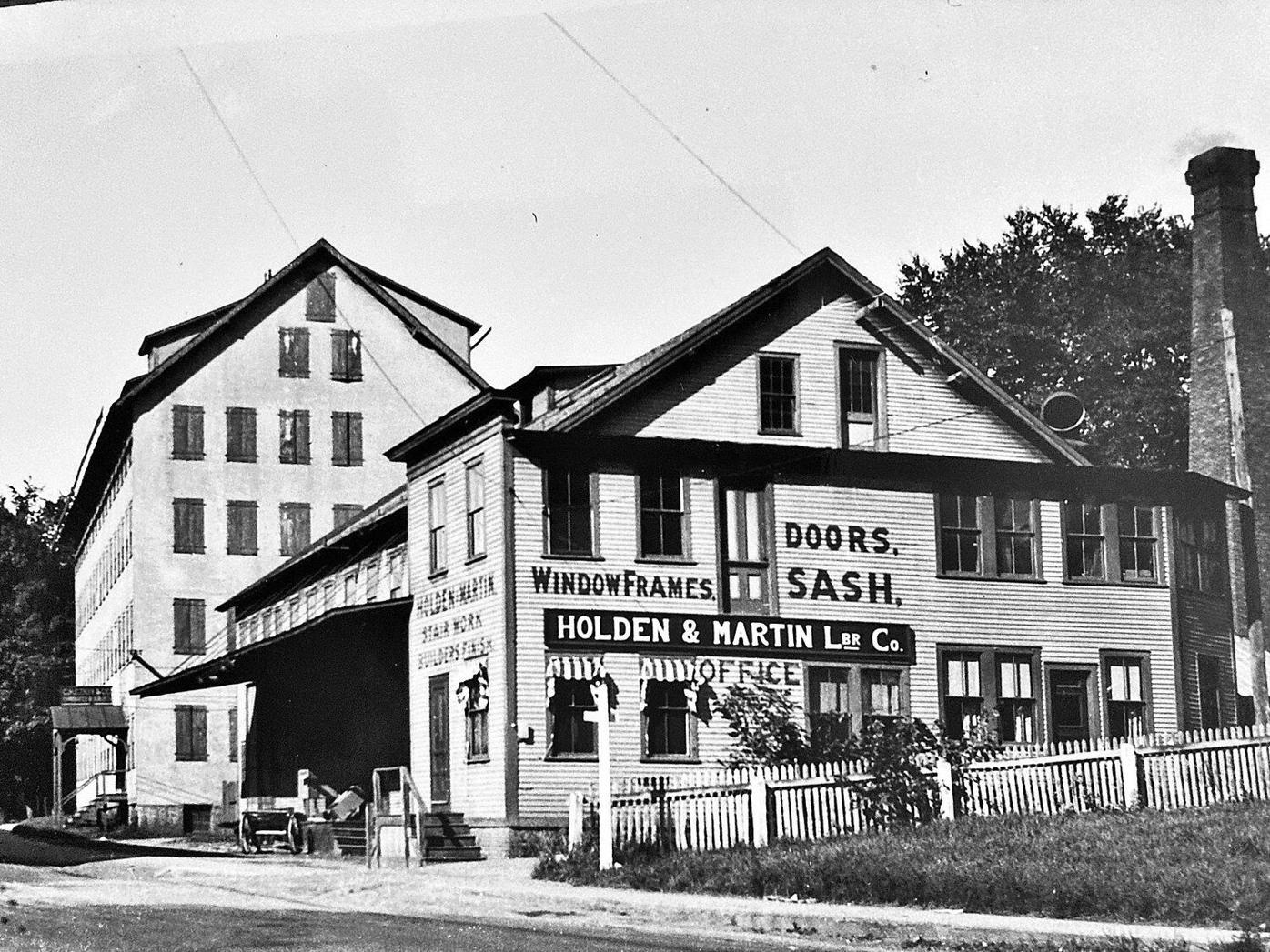 This 1933 photo shows Holden and Martin on Flat Street, the overall factory in the background. 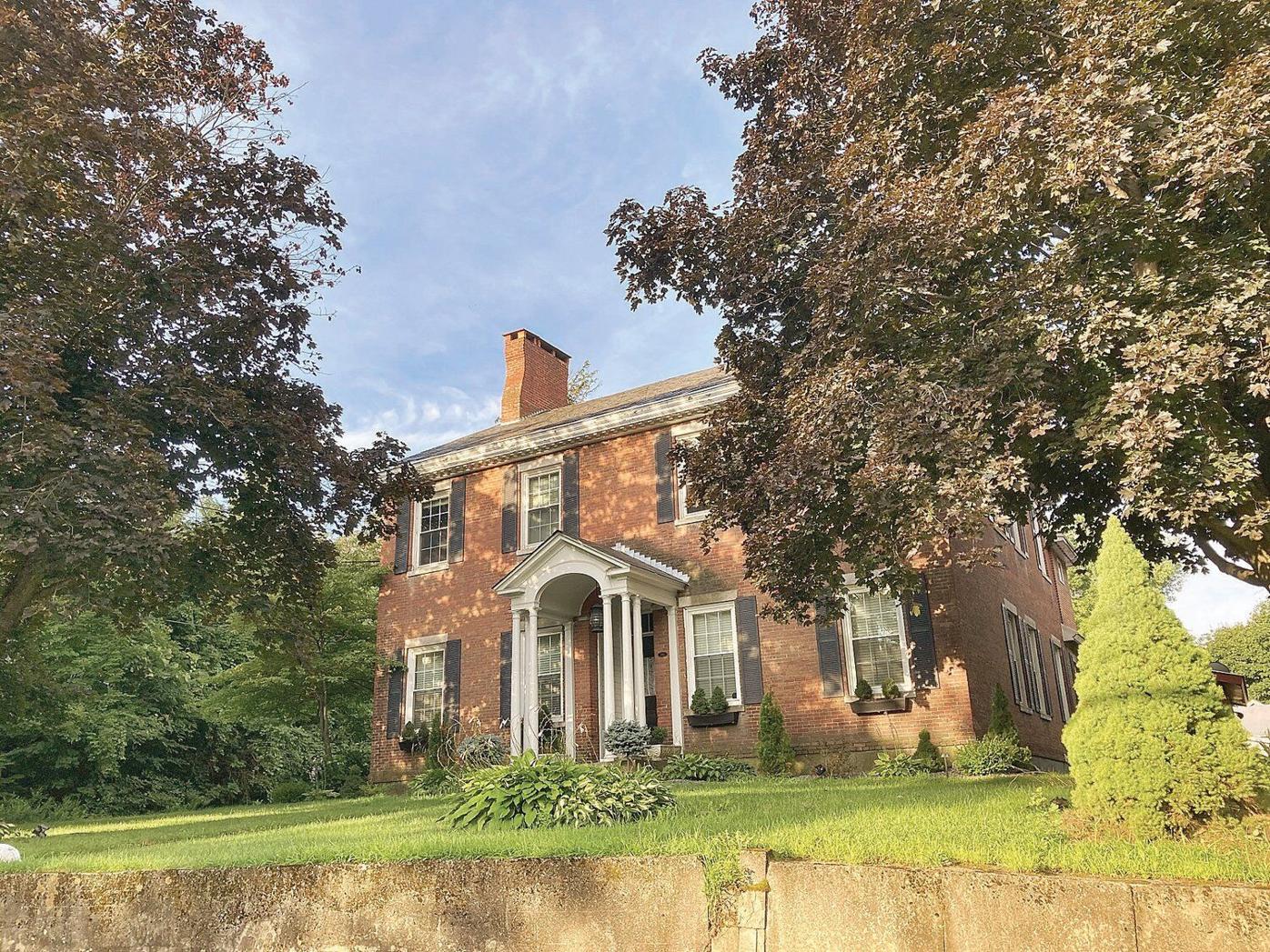 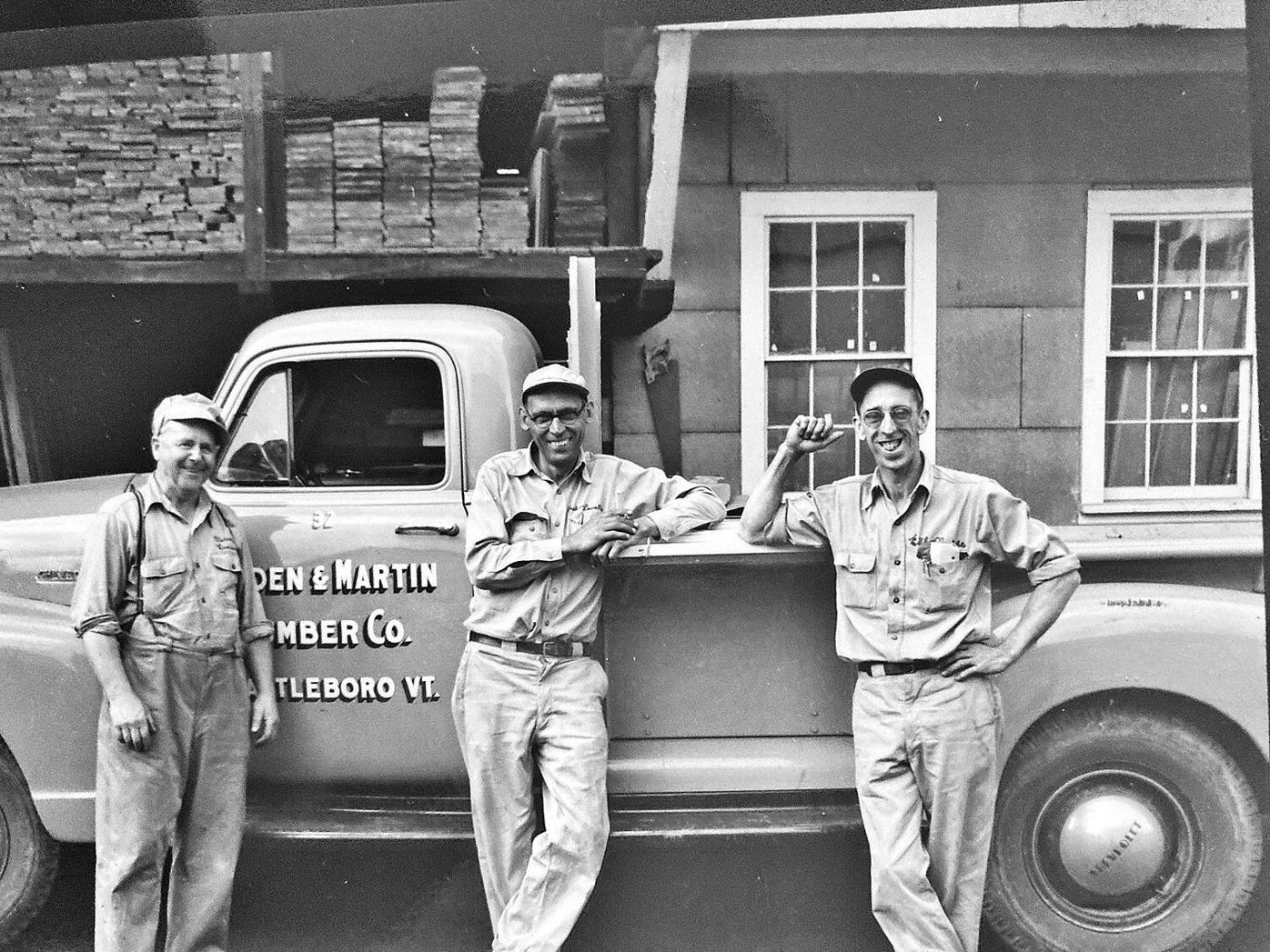 The Holden and Martin lumberyard on Flat Street.

Holden and Martin sawmill at end of Birge Street.

The Fletcher Sawmill, purchased by Holden and Martin in 1904, had been converted from Brattleboro Woolen Mill. Photo from 1890s, end of Birge St.

This 1933 photo shows Holden and Martin on Flat Street, the overall factory in the background.

The Holden and Martin lumberyard on Flat Street.

BRATTLEBORO — A few weeks ago we reflected on the changing nature of various sections of town and how buildings get repurposed as needs shift. At the end of Birge Street there was a woolen factory that operated for over 40 years. We wrote of the woolen mill a few weeks ago. This week we will focus on the other businesses established in that area and something of the businessmen who were involved with the industries.

The west section of Birge Street, as it rises to a hill, was once known as Thomasville. Elihu Thomas was a Brattleboro businessman who had his hand in many local enterprises. He partnered with other businessmen to start or expand numerous industries. He owned three separate paper-making businesses. He also had a pin and comb manufacturing company and a fanning mill company. A fanning mill separated wheat, oats and other grains from the chaff, straw and weed seeds found when the crops were harvested. The grain was run through the fanning mills so it could be cleaned and further processed. In 1827 an ad in the local paper claimed Thomas had gravestones, fanning mills, and cast iron ploughs for sale.

Thomas opened the first Brattleboro machine shop in 1833. The shop manufactured machinery focused on the paper making trade. The next year Thomas traveled to England and France for six months to study European paper manufacturing. When he returned he built a large English-style brick house on top of the hill near the end of Birge Street, surrounded by 50 acres of land. This area became known as Thomasville.

Thomas made a lot of money but he also managed to lose a lot as well. One of the adventures he invested in was a proposed railroad between Brattleboro and Bennington. This proved to be a poor investment as the mountains proved too challenging. He also invested with William Cutting in a typographic company that focused on creating type for the printing trade. This proved to be a horrible investment and in 1848 Elihu Thomas was forced to sell his house and property. He moved to Boston to reinvent himself. The name "Thomasville" continued to apply to that area into the late 1800s but Thomas himself was long gone.

In 1843 John Birge, the man Birge Street is named after, was one of the owners of the woolen factory at the edge of Thomasville. The mill was next to the Whetstone Brook when it burned down. He rebuilt the mill. Birge had begun as a watchmaker and jeweler. He found success and expanded his investments. Birge bought much of the land known as Thomasville and developed it into housing and business lots. The woolen mill went on to change hands many times and was eventually converted into a sawmill in the 1880s.

In 1904 a local lumber company known as Holden and Martin bought the sawmill. Holden and Martin had begun on Frost Street in 1891 and wanted to expand. The company had sawmills in Wardsboro and Dummerston and wanted to increase production. The firm dealt in both dressed and rough lumber and also manufactured doors, sashes and other wood products in their Frost Street facilities for the building trades.

The Birge Street sawmill became the place where most of Holden and Martin's sawing of logs took place and where 5 acres of land was used for lumber storage. The company turned the original sawmill into a tenement building and built a larger mill a little further north along the Whetstone Brook. The company also built a new dam and pond to better regulate the power source for the mill. Holden and Martin quickly became one of the largest lumber concerns in Vermont with over 30 employees. The section of town once known as Thomasville became known as Sawdust Alley.

In 1912 Holden and Martin began building houses and other structures in Brattleboro. They also opened a retail business to supply other builders with materials necessary for the construction trades. Eventually, the company built over 100 houses in town. The company specialized in building modest homes for working people.

The working class could make small initial down payments and pay Holden and Martin back in the form of rents until the house was paid off. This usually took less than 20 years and Lyman Holden, the president, said Holden and Martin never foreclosed on a house built by his company. The business became quite successful and Lyman Holden became a well-known benefactor to the community. He was instrumental in making land deals necessary to bring about the Union Railroad Station and freight house. He also donated land to the town for Plaza Park and paid for the construction of much of the park, including the fountain and "Spirit of Life" statue by artist Daniel Chester French. The statue is now on display in the Brooks Memorial Library.

During World War I, Holden financed over 100 Victory Gardens to help in the war effort and offered cash prizes to Boy Scout groups maintaining the gardens for the community.

The Holden and Martin sawmill operated until 1953. By that time the timber industry had drastically changed. Holden and Martin found that it was more economical to purchase rough lumber from outlying mills that were closer to the timber source. The sawmill operated as a specialty lumber operation for a few years and the building was then converted into apartments. The apartment building is still there today. The name Sawdust Alley, once prominent in that part of town, has faded away. In 1960 the Holden and Martin Lumber Company was purchased by Grossman's and the New England-based lumber business operated on Flat Street until 1981.

While researching this story we found many examples of Holden and Martin employees injured while working to turn trees into finished lumber. The Brattleboro Memorial Hospital opened in 1904, (known then as the Hemlocks), and its second patient was Holden and Martin employee Archie Mellen. He was working in Jamaica, cutting and loading logs when a tree fell and he suffered a compound fracture of his leg. He was brought down the West River Valley by the Narrow Gauge train and delivered to the newly opened hospital for care.

Men were injured in the lumber yard, moving heavy, and sometimes sharp, lumber to and from wagon, sleigh or truck. Workers were also injured in the mill itself when the saw cut into the wood and the logs didn't respond the way the workers expected. Wood shards would act as sharp projectiles and injuries were numerous.

After reading many of these news reports it was a nice change of pace to come across the following story about an injured Holden and Martin worker. In the early 1900s word traveled up Flat Street from the Holden and Martin woodworking plant that an employee had been killed when his clothing got caught in a swiftly spinning belt shaft. The dead man had been running a machine by himself and when another worker came upon him the man was lying on the floor, stark naked except for his shoes and socks. It seemed his clothing had caught in the revolving machinery, he was spun around the shaft until his clothes ripped from his body, and he was then violently thrown to the ground.

The worker had been lying there for approximately 15 minutes when the floor boss told one of the other workers to notify the victim's wife and ask which undertaker she would like contacted so the body could be removed. The employee was friends with the dead co-worker and knew the victim's wife. He hesitated because he didn't want to be the bearer of bad news. This hesitation proved to be worthwhile as the "dead" man groaned and sat up.

It turned out he had a bruise where his head hit the floor but no other injuries. He had been knocked unconscious and no one had chosen to get close enough to the naked body to see if he was still breathing. A local doctor was called and he checked the man over. The doctor said the worker wasn't seriously injured. The hesitant co-worker traveled next door to the overall factory on Flat Street and got his friend a pair of overalls to wear home. The injured man was then loaded into the doctor's buggy and delivered to his apartment. The story goes that the man was back to work within a day or two and continued to work for Holden and Martin for many years.