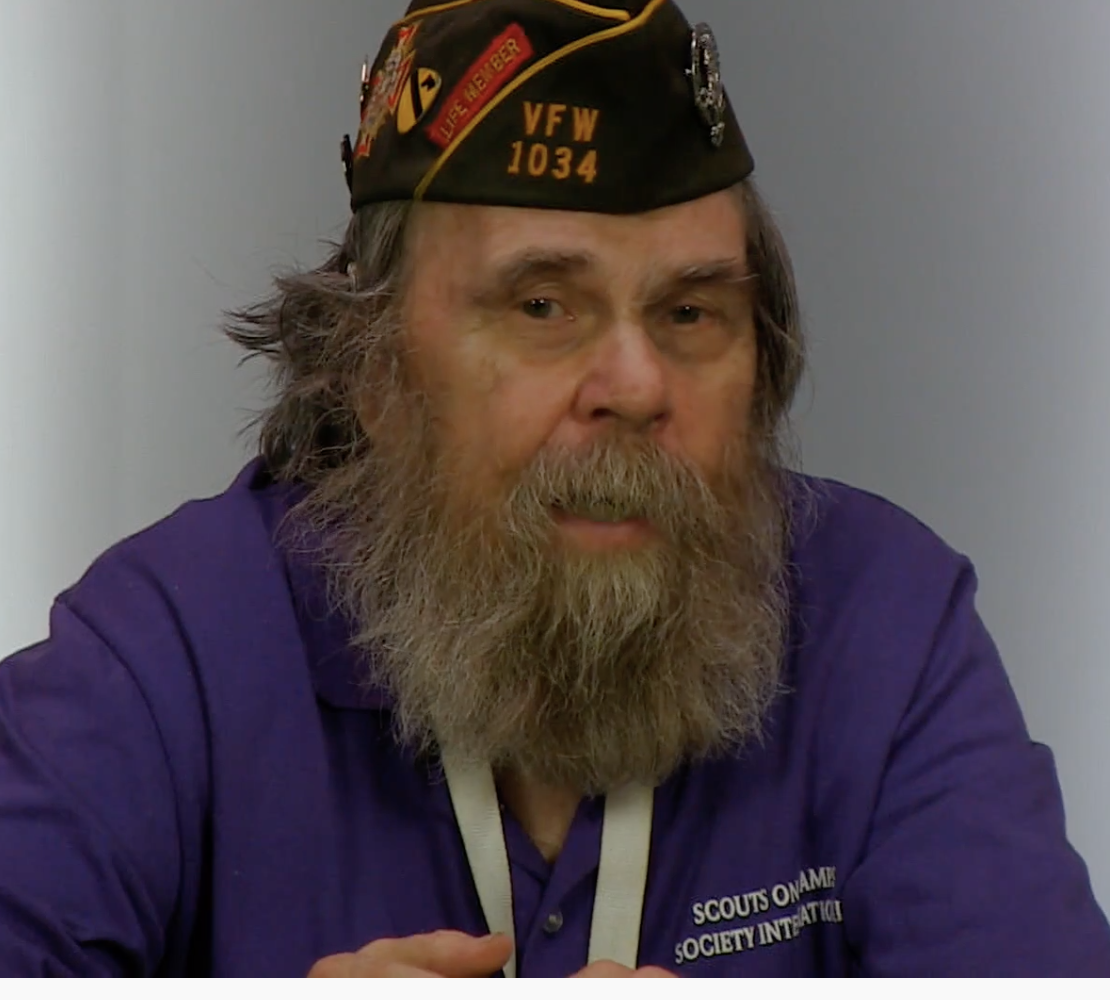 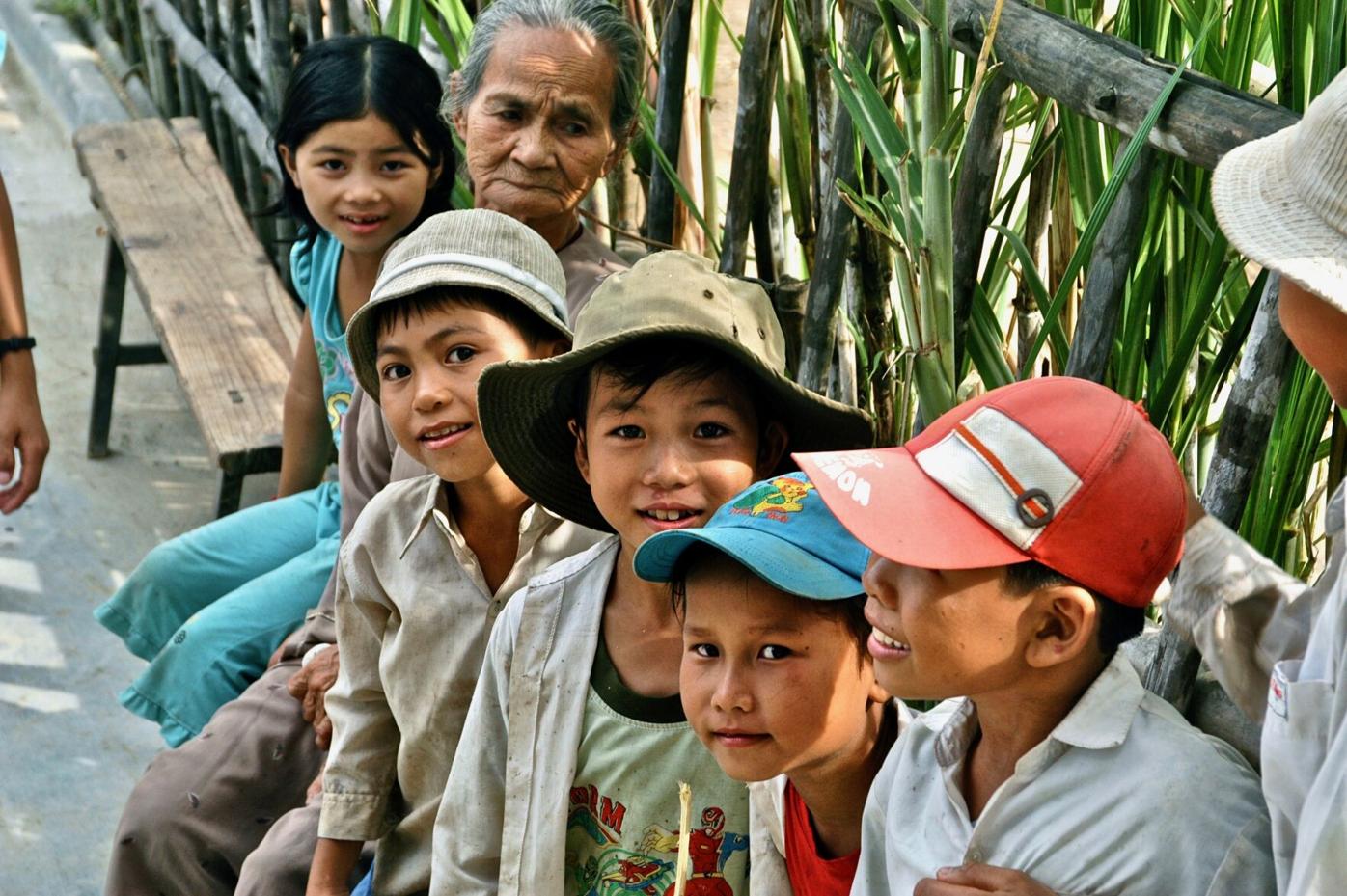 Vietnamese youths gather to celebrate the donation of a home in their village in 2007. The home was built by the Vietnam Veterans Memorial Fund. 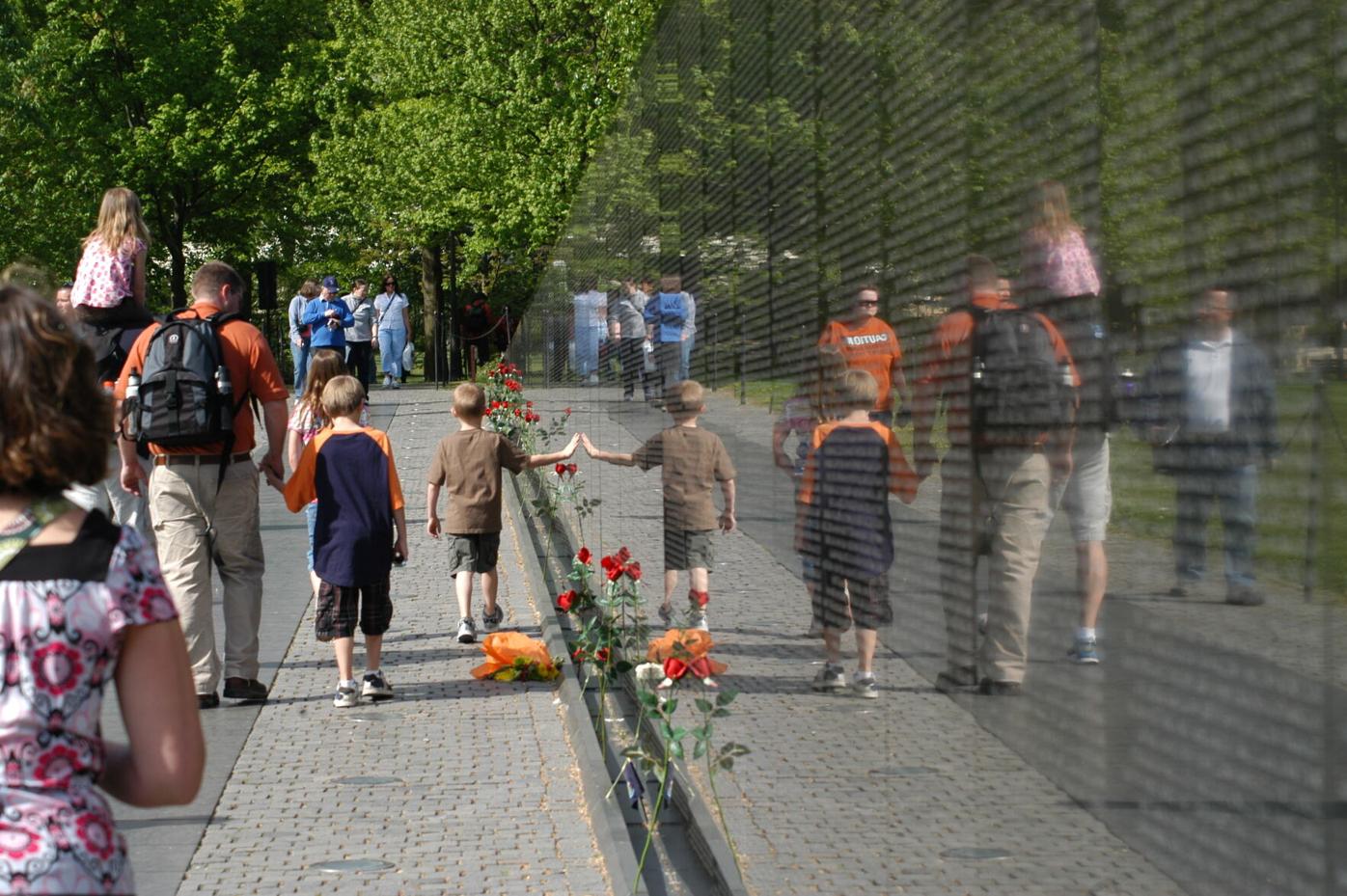 A war veteran visits the Vietnam Wall Memorial in Washington, D.C. with his son.

Vietnamese youths gather to celebrate the donation of a home in their village in 2007. The home was built by the Vietnam Veterans Memorial Fund.

A war veteran visits the Vietnam Wall Memorial in Washington, D.C. with his son.

“History can be found in textbooks, but it lives in the first-hand stories of those who experienced it. When experiences are shared from one generation to the next, they resonate with the convictions and questions of the storyteller. The facial expression, the body language, the projection of the voice, and the look in the eye of the speaker — these are the cues, which form bonds between the speaker and the audience, and bring history into the present.”

The Vietnam Traveling Wall will visit Brattleboro this fall. We will take a local look back at one of the most contentious eras in U.S. history.

In 1988, teachers at Brattleboro Union High School recognized that students had not lived through the Vietnam War era and looked at the conflict as just another set of facts to ponder. What had been a visceral experience for those old enough to remember was now a set of constructs in textbooks devoid of much substance. Teachers wondered how students could be engaged in a way that would bring some immediacy to the students in a meaningful way.

The answer evolved into a weeklong series of seminars and presentations held at BUHS entitled ‘The 60s — War, Protest & Change.’ It included visits from a diverse group of guests with varying opinions on the war and era. It would be a contentious week.

Among those accepting an invitation to participate was Leete Ekstrom, a former Central Intelligence Agency officer. Ekstrom was asked for permission to tape (audio and video) his remarks. He said yes to the audio but not to the video. He provided the tape and the recorder and then took both with him after the event. He explained that there were members of the press in attendance, and they would report on his remarks and likely distort something that he said. With the recording he would prove to the CIA what he actually said by providing the tape, if necessary.

A 30-year veteran of the Army who served as a pilot in Vietnam during the war, retired Colonel Norbert Johnston, addressed the assembled at BUHS. Johnston stressed American commitment to the policy of containment of communism. He acknowledged that U.S. policy sometimes became “convoluted.” Johnston believed President John F. Kennedy, who said the U.S. was in Vietnam “to help the Vietnamese obtain freedom from communism while establishing a strong democratic government.” Johnston added, “At the time our policy made sense.”

During the question-and-answer period after Johnston’s remarks, a BUHS student asked, “Was defending this worth tearing the nation apart?” Johnston responded that this war was not the only issue causing domestic unrest and it was “the people and the civilian government” that determines where the military goes and what it does.

In 1969 Windham County appointed a new Sheriff, Putney’s William ‘Bill’ Graham, who found himself ”very often being a referee between Windham College and the locals.” Graham was a one-man sheriff’s department who said some “local fellows erroneously believed that since the sheriff lived in Putney, they could do what they wanted.” The main source of tension was between what Graham called “the so-called hippies” who made up a strong part of the 1,000-student Windham College campus and local “rednecks, for lack of a better term.”

It was not always smooth sailing. Some of the locals set up a bathtub and ‘stocks’ to give haircuts. Graham received threatening phone calls “from locals saying they’d burn my house down if I kept protecting the kids.” He also received letters from “hippies,” telling him to stop protecting his Putney friends. The FBI informed Graham that a leader of the Weather Underground and Students For a Democratic Society, Bernardine Dohrn, was hiding at the Red Clover Farm commune in Putney. “A lot of these people used Vermont as a kind of haven to lay low and hide out. Communes were very difficult to infiltrate,” Graham said. Local and federal authorities found no trace of Dohrn.

Among the activities that particularly roused locals were the sight of nude student gardeners in full public view at the so-called ‘free farm’ along US Route 5 just north of the campus, and the annual pig roasts at Windham College were raucous. Graham remembers becoming aware of Windham College’s 1972 valedictorian as the author of a so-called “bomb cookbook” as Graham described it. Graham quickly added, “But I never knew him to do any violence.”

By May of 1970, the feeling was that violence in Vermont could spiral out of control. “I think the locals might have gotten out of hand,” Graham said. “Sometimes I think back how we didn’t really have it under control.”

The Brattleboro Reformer reported on a confrontation at a farm just north of the entrance to Windham College on U.S. Route 5. What follows is part of the article.

Showdown Averted at Windham College; ‘Free Farmers’ involvedPUTNEY — A long-planned showdown between Windham College and the Free Farm community in Putney was avoided Sunday in a series of complicated orders and counter-orders.

Acting upon a complaint filed by Windham College President Eugene C. Winslow, state police and the Windham County sheriff’s department showed up in force in Putney to keep the free farmers off college-owned land.

In the end, there were no arrests, no direct confrontation, and the farmers were allowed to go back to their farm.

David Rohn, Windham College Art Department Chairman, in an interview as part of the Brattleboro Historical Society’s Oral History Project would speak of the situation between college students and elements of local Putney society. “The Flower Flower children, the hippies. There was a girl named Ritzy, who lived up in the dormitories. She wore kind of Indian long flowering plants. She was a curvaceous, young thing and generally no shoes but bells around her ankles. So the other girls in the dormitory beat her up. Take off those bells. She said, ‘I’m free.’ They freed her. She got an apartment down by the Putney Paper Mill. She would go flaunting by the paper mill in the morning on her way up to class with bells jingling. And the working fellows in the paper mill would hang out the windows. Because she was quite bouncy they’d hangout and cat call at her. One morning, she mooned them. She hoisted her skirt and showed her backside. She wasn’t wearing any underwear. I like to think of the paper mill guys staggering backwards from the impact.”

There were other presentations: Marlboro College’s Jerry Levy, Brattleboro activist Shoshana Rihn, a panel of Vietnam War veterans, including longtime and very popular BUHS teacher, John Murphy. Murphy had been offered opportunities in previous years to participate in veteran panels and had always refused. This time he said “yes” with some trepidation. There were no incidents. Afterward, Murphy expressed thanks to the organizers of the event for drawing him in. It proved to be an experience that relieved years of pent-up tension fed by Murphy’s desire to keep his wartime experiences to himself.

The Reformer and other news affiliates covered the weeklong series. Not everyone in the community was supportive of the effort to introduce students to various participants of a contentious time in U.S. history. For example, this author was in a local supermarket at the end of the week. A large number of people had seen what had gone on during the program. A woman eyed this author curiously at the check-out, summoned the courage and asked, “Are you the one who is running that program at the high school?” The response, “Yes, I am.”

She quickly responded, “You ought to leave that awful stuff from the 1960s alone. You shouldn’t be teaching that to the students!” The response, “I teach history. It is what happened.”

This appeared in the Reformer’s letters to the editor:

The Glorious Garbage of the ’60sEditor of the Reformer:

My Heart goes out to the students at BUHS. Why should they have to sit on school time and listen to the glorious garbage of Al Canfora, Shoshana Rihn, Jerry Levy and Bernard Sanders? People of this nature are turning learning institutions into a spiritual graveyard.

Students should be listening to moral and spiritual revival. Our schools cannot deteriorate anymore than they already have. The minds of these wonderful young students are still fragile. The youth of America needs to hear words of wisdom, truth, love and comfort. Wisdom is justified by our children.

These young adults should not have to listen to a bunch of burnt-out intellectuals who have absolutely no vision, no direction and no hope. We cannot deny students the right to live like God-fearing decent human beings.

See how wicked people think up evil; they plan trouble and practice deception. But in the traps they set for others; they themselves get caught. So they are punished by their own evil and are hurt by their own violence.