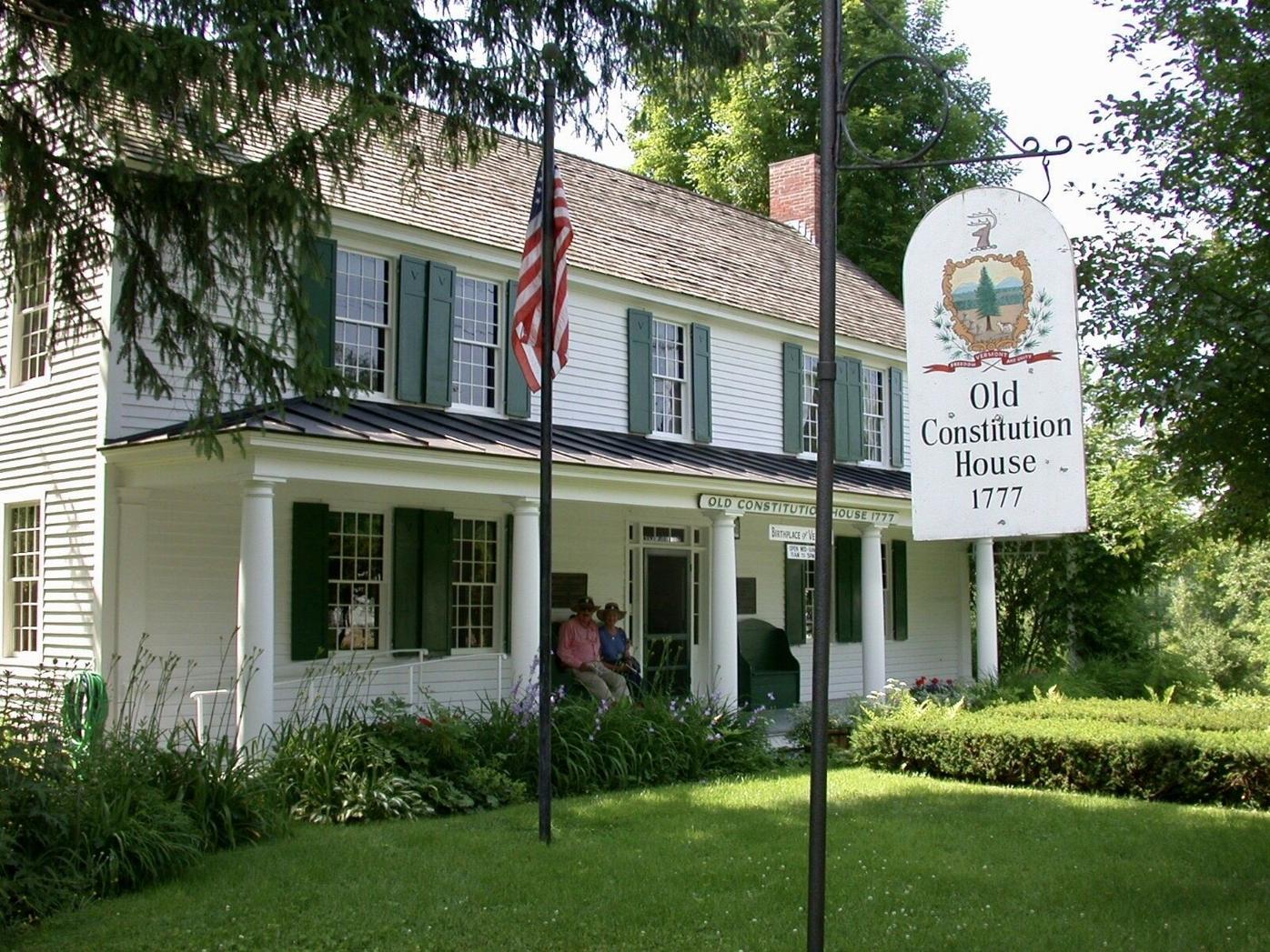 The Constitution House in Windsor is considered the birthplace of Vermont. Formerly known as Elijah West’s Tavern, this is where Vermont’s Constitution was adopted on July 8, 1777. 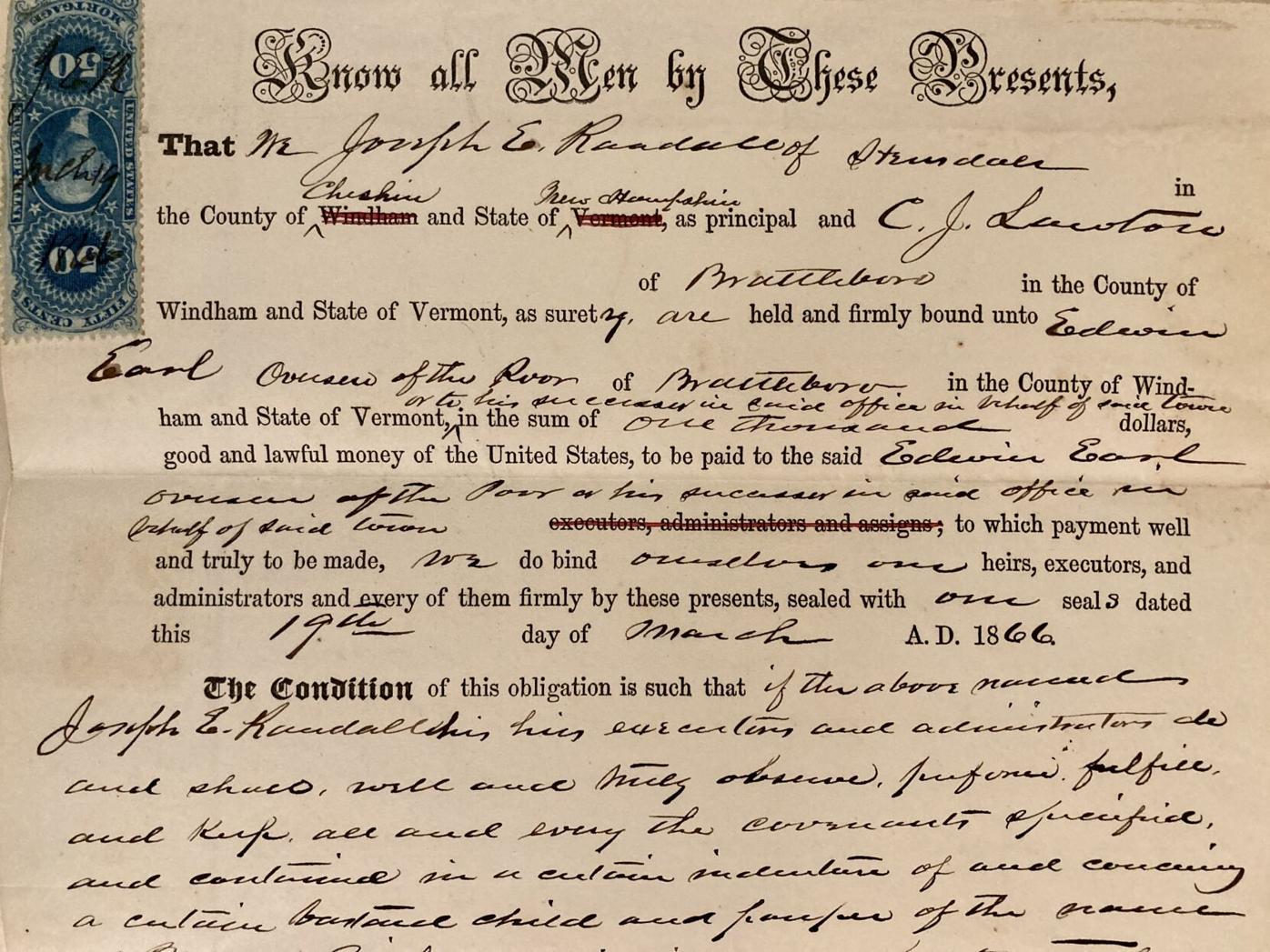 This is an 1866 Indenture contract for an infant girl identified as a “bastard child and pauper.” She was sold to a couple in Hinsdale, N.H. At the age of 18 she left the family and married.

The Constitution House in Windsor is considered the birthplace of Vermont. Formerly known as Elijah West’s Tavern, this is where Vermont’s Constitution was adopted on July 8, 1777.

This is an 1866 Indenture contract for an infant girl identified as a “bastard child and pauper.” She was sold to a couple in Hinsdale, N.H. At the age of 18 she left the family and married.

According to The Atlantic magazine, Vermont was “the first place in the Western Hemisphere, in 1777, to outlaw slavery.” In 1777 the banning of slavery in a constitution was a radical move, but Vermont did not ban all forms of bondage.

The text of the original Vermont Constitution states, “That all men are born equally free and independent, and have certain natural, inherent and unalienable rights, amongst which are the enjoying and defending life and liberty; acquiring, possessing and protecting property, and pursuing and obtaining happiness and safety; Therefore, no male person, born in this country, or brought from over sea, ought to be holden by law, to serve any person, as a servant, slave or apprentice, after he arrives to the age of twenty-one Years, nor female, in like manner, after she arrives to the age of eighteen years, unless they are bound by their own consent, after they arrive to such age, or bound by law, for the payment of debts, damages, fines, costs, or the like.”

Recently the Vermont Senate voted to support an amendment to the state constitution which would change the language of the constitution to read “That all persons are born equally free and independent, and have certain natural, inherent, and unalienable rights, amongst which are the enjoying and defending life and liberty; acquiring, possessing and protecting property, and pursuing and obtaining happiness and safety; therefor slavery and indentured servitude in any form are prohibited.”

Since its beginning, Vermont has prided itself with the understanding that it was the first American government to ban slavery. However, we have evidence that young people were treated like property well into the 1890s.

In 1866, Brattleboro’s Overseer of the Poor signed an Indentured Service contract with a farmer in Dover for the services of a 10-year-old boy named Robert Drake. That’s right! In 1866, one year after the Civil War ended, and four months after the United States Congress abolished slavery, a 10-year-old boy from Brattleboro was made an indentured servant until he reached his 21st birthday.

Professor Peter Teachout of Vermont Law School gave this testimony during the legislative hearings about the slavery amendment, “Restrictions on the freedom of the indentured servant were not unlike restrictions on the freedom of a slave. The chief difference was that the indentured servant was legally bound to serve for only a term of years, while the slave was bound for life.”

A search of Vermont digital newspaper archives produces a long list of runaway indentured servant advertisements seeking the return of a young person to their “master.” For example, the 1797 Rutland Herald posted an ad for a “Ranaway, indented boy name Eli Hamilton, between fifteen and sixteen years of age.” The 1819 Vermont Republican of Windsor published an ad “Ran Away, an indented Negro, between 18 and 19 years old, name Solomon Freeman.” The 1824 National Standard of Middlebury posted, “Runaway, an indented boy by the name of Joshua Linsly, 15 years old.” The youngest runaway we found in the archives was 11 years old. It seems that being an indentured servant could be more than some young people could stand.

In 1797, the Vermont Legislature enacted a law which said every town in the state was responsible for supporting and maintaining their own poor, elderly and disabled.

Each town established an elected office called the Overseer of the Poor. It was that person’s job to arrange for the care of the poor. Each town had to tax its citizens to support their poor, elderly and disabled. This meant that towns looked for ways to keep costs down.

Some towns would “warn out” people who were undesirable. The select board would decide a person or family was not a positive contributor to the community and a “warning” would be issued that would inform the person or family that they had to leave town by a certain date. However, in 1817 the Vermont Legislature made “warning out” illegal. It seems select boards were passing undesirables from one town to another.

Towns then established “Town Farms” or “Poor Farms” where the poor would live and work together in order to produce goods that could be sold in order to help lower the cost of providing for them.

In Brattleboro there was a “Town Farm” near Ames Hill in West Brattleboro. In 1885 the “Town Farm” moved to the corner of Mather and Bonnyvale Road. The Farm operated until 1951.

One way the town could cut down on expenses was to sell poor children to families willing to take them in. In return for the child’s labor, the town would receive money from the family, and sometimes the child would receive compensation after their term of service was over. There are many indentured servant records from our community in the files of the Brattleboro Historical Society.

They make for some heartbreaking reading. Typically, the indentured child was under the age of 13 and was bound to a person or family in a town near Brattleboro; like Dover, Marlboro, Guilford or Hinsdale, N.H. Sometimes the Overseer of the Poor and the Master were the only signers of the contract and sometimes mothers also signed the document. The contracts said that the children would serve their masters faithfully; and would honestly, orderly and obediently complete all tasks assigned to them by their masters and their families.

In return, the children would receive food, clothing, lodging and all tools and equipment necessary to complete the duties of a servant. Girls were usually maids and boys were usually farmhands. Some indenture contracts promised $100 to the child at the end of service and some contracts offered nothing but freedom after their service. For females the contracts lasted until they were 18 years old or whenever they were married, whichever came first. For males the end of the indenture arrived on their 21st birthday. In Brattleboro, we have seen contracts for children as young as 4 months and as old as 13 years.

Ten-year-old Robert Drake was sent to work for a farmer in Dover until he became 21. It was a valid contract that young Robert could not break. Brattleboro received money from the farmer and the farmer promised to pay Robert $100 at the end of the 11 years. Another contract between the town and a family in Hinsdale documents the sale of a 3-year-old girl to the Hinsdale family. After 15 years of labor the young woman would receive “one good suit of holiday clothes of the value of twenty five dollars.” In another example, a 4-month-old female was sold to a Hinsdale man for $1,000.

Before state and national welfare programs, each town had to figure out how to take care of the poor, elderly and disabled. In Brattleboro, the town decided to sell the labor of poor children in order to subsidize the expenses of the Town Farm and local welfare programs.

We have indentured servant contracts in our archives that are dated as late as 1893. Testimony concerning the amendment to the Vermont Constitution focused upon stories of how Vermont did not allow the importation of enslaved people into the state. Evidence was also offered that characterized indentured servants as immigrants coming to Vermont seeking a better life.

We have evidence that indentured servants were also children who were sold to the highest bidder. This was happening in Brattleboro almost 30 years after the 13th amendment to the United States Constitution declared, “Neither slavery nor involuntary servitude...shall exist within the United States.”