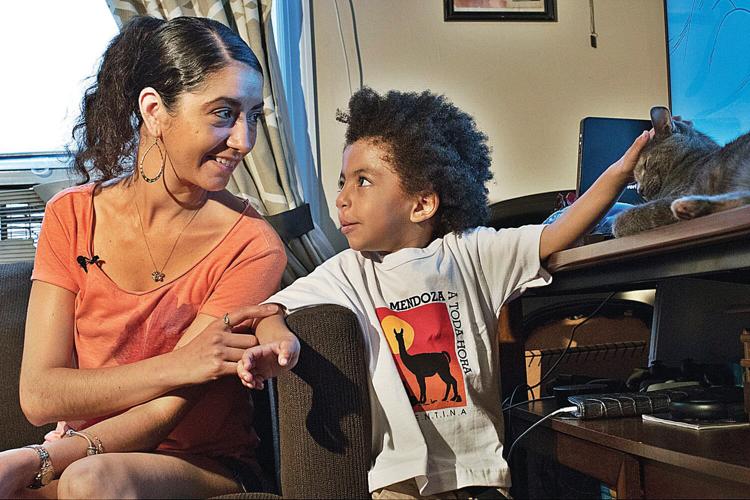 Emily Bolton-Blatt talks with her son, Kenneth Hulett III, 5, as he pets his cat, Alley, during an interview at their home in the Queens borough of in New York on Aug. 1. At birth, Kenneth weighed just over 2 pounds (0.9 kilograms), with feet the size of fingernails. He was born 2 months early, by emergency Caesarian section, and rushed to NYU Langone's neonatal intensive care unit. 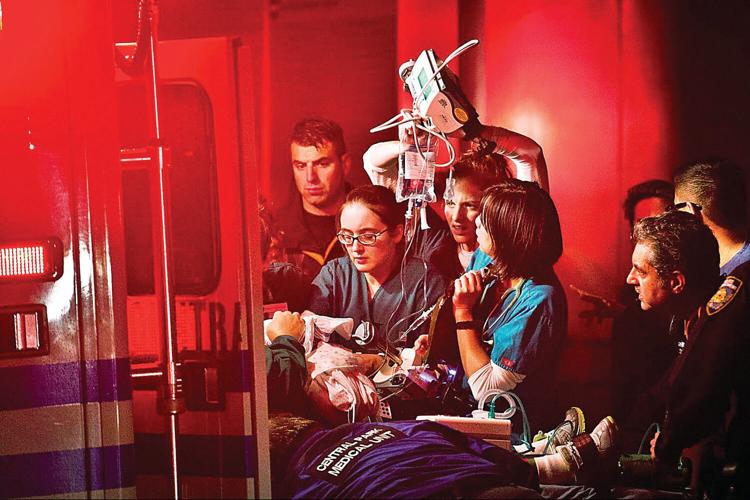 Medical workers carry a baby into an ambulance as the NYU Langone Medical Center is evacuated during Superstorm Sandy on Oct. 29, 2012. Thirty two infants were among those moved after the hospital was flooded and lost power. 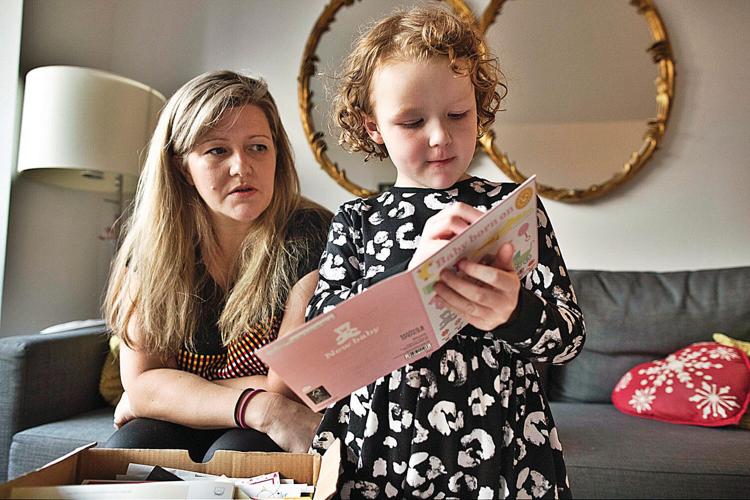 Julz Donald and her daughter, Freda Potts, 5, look through mementos from Superstorm Sandy during an interview in New York on Aug. 22. Freda was one of 32 babies evacuated from the NYU Langone Medical Center after it got flooded and lost power during Superstorm Sandy in 2012.

Emily Bolton-Blatt talks with her son, Kenneth Hulett III, 5, as he pets his cat, Alley, during an interview at their home in the Queens borough of in New York on Aug. 1. At birth, Kenneth weighed just over 2 pounds (0.9 kilograms), with feet the size of fingernails. He was born 2 months early, by emergency Caesarian section, and rushed to NYU Langone's neonatal intensive care unit.

Medical workers carry a baby into an ambulance as the NYU Langone Medical Center is evacuated during Superstorm Sandy on Oct. 29, 2012. Thirty two infants were among those moved after the hospital was flooded and lost power.

Julz Donald and her daughter, Freda Potts, 5, look through mementos from Superstorm Sandy during an interview in New York on Aug. 22. Freda was one of 32 babies evacuated from the NYU Langone Medical Center after it got flooded and lost power during Superstorm Sandy in 2012.

NEW YORK — Their lives began with one of the most dramatic stories of Superstorm Sandy: the evacuation of 32 newborn babies from a major New York City hospital that got flooded and lost power. Hospital staffers tended to laboring women in the dark and carried mothers and tiny infants — 21 of them in intensive care — down stairways into the thick of the 2012 storm. Doctors and nurses squeezed air pumps by hand to fill some of the most fragile babies' little lungs.

In the end, every one was delivered to safety.

Five years later, some of those babies are kindergarteners with mementos of the storm in their birthday celebrations, keepsake boxes and even their names. Their parents remember the experience with awe, humor, gratitude and the chagrin of sharing a day of personal joy with a natural disaster.

One mom tells her son: "We were the lucky ones that day."

"I know this is the worst possible timing," Tamar Weinstock said as she woke her husband, Allon, "but I think my water just broke."

Tamar's due date was three weeks off. But their first child was coming, and so was Sandy, a 1,000-mile-wide behemoth with nearly 100-mph winds pushing a huge swell of ocean toward the coast of New Jersey and New York. The Weinstocks hurried from their home in the Long Island City section of Queens to NYU Langone Health's Tisch Hospital, set along the East River in midtown Manhattan.

"Oh, my God, this is happening in the middle of a hurricane," thought Tamar, a banker.

"You're in the best possible place," staffers reassured her.

With the hospital-room shades pulled down, the couple took in only snatches of the storm from the room's TV. They noticed the electricity flicker at 7 p.m., but generators kicked in.

Then, at 8:30 p.m., the backup power failed, and the hospital plunged into darkness.

Labor didn't. "You just have to keep going with what you're doing," Tamar realized.

NYU Langone had thought it could handle Sandy. After moving out sometimes frail patients before an ultimately uneventful Hurricane Irene in 2011, the hospital was allowed to stay open during Sandy after assuring city officials it had generators and fuel ready.

Then the storm raised the East River by more than 10 feet, crippling a nearby power plant and pouring more than 15 million gallons of water through air vents and other openings into the hospital's basement. The water triggered sensors that shut off fuel to the generators providing power for 322 patients.

Dr. William Schweizer, the obstetrics safety chief that night, and his colleagues had about 10 patients in labor and others who had just delivered, including one who'd had a premature baby. And the physicians, nurses and aides would have to get them all out of the hospital.

But first, the doctors decided, they would deliver babies who appeared ready to arrive by midnight, rather than risk births in ambulances.

Out came flashlights, emergency glow sticks, and techniques from a less technological era. Doctors would use stethoscopes, along with battery-operated devices, to monitor unborn babies' heartbeats. Nurses would keep track of contractions with watches, pens and paper.

"We just dealt with our own familiarity with a process that has been going on for as long as mankind has been," Schweizer said.

"People pulled out of their soul what they could do," he says.

Doctors and nurses gathered by Tamar's bed. They needed to deliver the baby. Now.

"You hear your baby crying for the first time, and nothing else really matters," says Allon, a construction project manager.

These days, their son Stone is a kindergartener so awesome that Awesome is his unofficial middle name, bestowed by a cousin. Glow sticks are a go-to favor at his birthday parties. Like several other new parents from that night, the Weinstocks credit NYU Langone — which has since undertaken more than $1 billion in flood-proofing improvements — with maintaining calm and control in an unforeseen situation.

But the Weinstocks, both of them 37, make sure Stone knows he's fortunate to be celebrating a day that was catastrophic for many others in New York City. Sandy killed 43 people and damaged or destroyed tens of thousands of homes and apartments.

"You almost feel guilty that for us it's such a happy moment, because that's what started our family," Allon says. "But it's not lost on us what everybody else went through."

GET MY BABY BACK

Staffers were in Julz Donald's darkened room, explaining that the hospital where she'd had daughter Freda that morning was being evacuated. Donald said she could walk out.

"I didn't actually realize where we were," the 42-year-old marketing researcher says, chuckling.

They were on the 13th floor — and the stairs were the only way down.

The first families to leave were those whose babies had health issues. Then, around 2 a.m. Donald and husband Mark Potts were escorted by a doctor, nurses, medical students and volunteers down a stairway by flashlight. At the hospital's insistence, a nurse carried a tightly swaddled Freda.

"Let's get down these stairs so I can get my baby back," Donald thought.

Her legs were exhausted by the time they reached a lobby illuminated by the flashing lights of dozens of ambulances — "like a scene out of 'Die Hard,'" recalls Potts, 38, who works in advertising.

The Long Island City family keeps its hospital-issued flashlight in a "birth box" for Freda, a wry girl who likes Irish dance, writing, beluga whales, the color purple — but not the wind.

Dmitry and Daria Shurba were about to take newborn daughter Masha home when they settled on her middle name: Sandra, after the storm.

The Stamford, Conn., couple's second child was born at NYU Langone around noon on the day of the storm. Dmitry, a 42-year-old auto sales manager, was returning from getting celebratory flowers and wine when the power went out, with Daria in a 13th-floor room.

After he got there, the windows rattled so ominously that the family waited in a hallway for its turn to walk down.

The Shurbas figured their daughter should be proud of being born during a historic storm, and she is. She sometimes asks to be called by her middle name, says Daria, 39, an information technology project manager.

"I call her my little hurricane, at times," Daria says. "She has a great heart and everything, so she's tough."

STRONGER THAN THE STORM

Kenneth Hulett III weighed just over 2 pounds (0.9 kilograms), with feet the size of fingernails. He'd just been born 2 months early, by emergency Caesarian section, and rushed to NYU Langone's neonatal intensive care unit, or NICU. Doctors had determined he might have a rare and potentially serious genetic disorder.

His parents, Emily Bolton-Blatt and Kenneth Hulett Jr., were still in a recovery room when the power went out. Hulett raced up to the darkened NICU, where he recalls a nurse asking him to watch the numbers displayed on a machine running on backup batteries. So he watched, unsure what the numbers meant, wondering how long the batteries would last, hoping for the best.

"This is a natural disaster happening while our son was just born," says Hulett, 34, an Army veteran pursuing a computer engineering technology degree. "One of the happiest moments in your life ... but then, with the chaos around it, it's just all of the emotions mixed into one."

Then the word came: evacuate.

Worried about Bolton-Blatt but unable to leave their son's side, Hulett followed the tiny boy, clasped in a nurse's arms, down nine flights of narrow stairs lined by people with flashlights. The nurse and a doctor pumped air into Kenny's lungs by squeezing a plastic bulb over and over, as a security guard carried an oxygen tank and two nurses toted monitors.

"Let us get to safety" was Hulett's only thought as he sloshed through heavy rain to an ambulance.

Kenny would be hospitalized for another three months before coming home to Flushing in Queens.

Now a talkative, engaging kid, he has needed surgeries for a cleft palate but hasn't been affected by the genetic disorder that was a concern before his birth. He plays with his family's cat, eyeballs cartoons and giggles occasionally as his parents tells visitors the first chapter of his life story.

For his first birthday, his grandmother had a banner made with a custom message:

"Stronger than the storm."