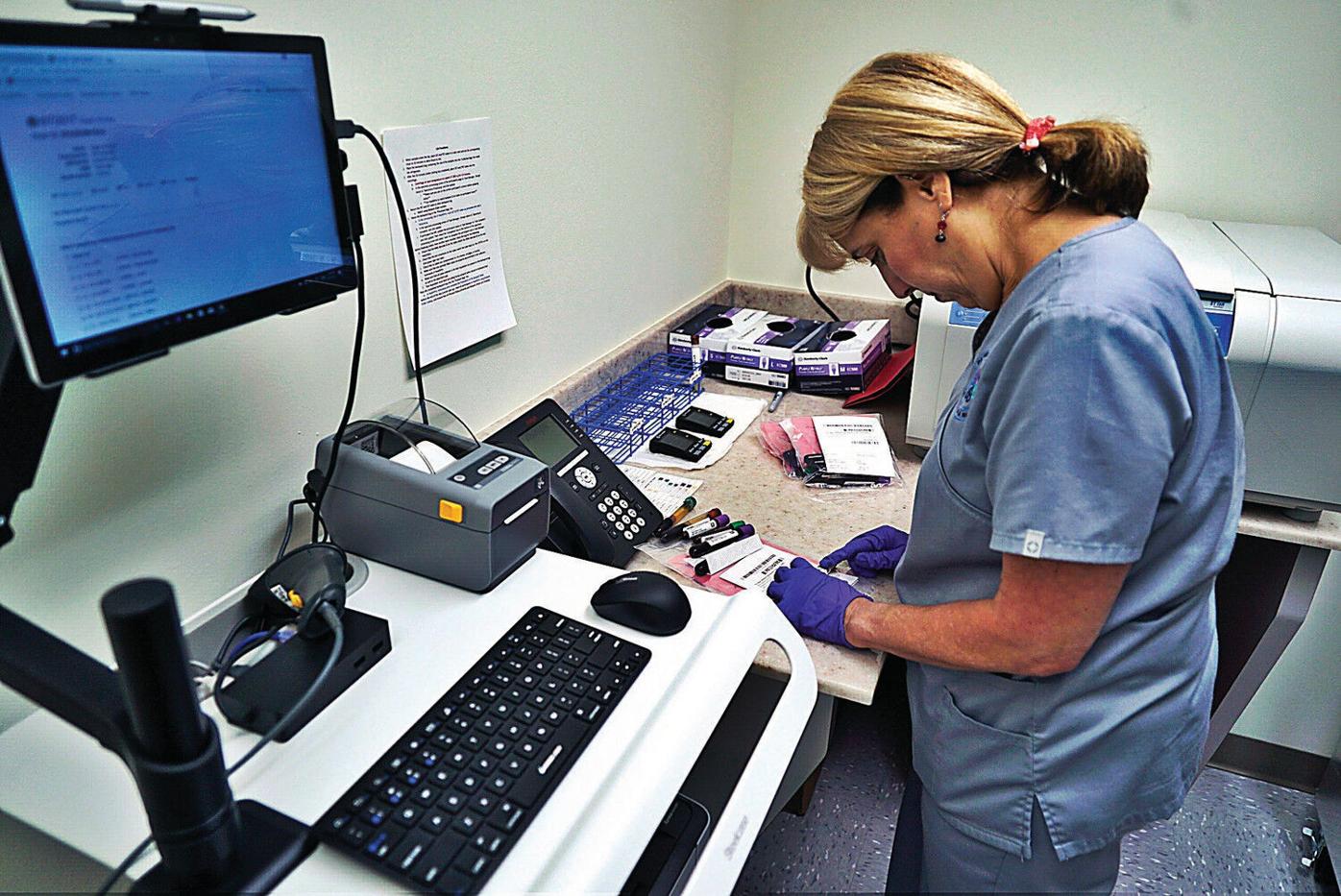 Stephanie Richurk, a nurse at the University of Pittsburgh Medical Center, sorts blood samples collected from participants in the "All of Us" research program in Pittsburgh, Ohio Aug. 7. 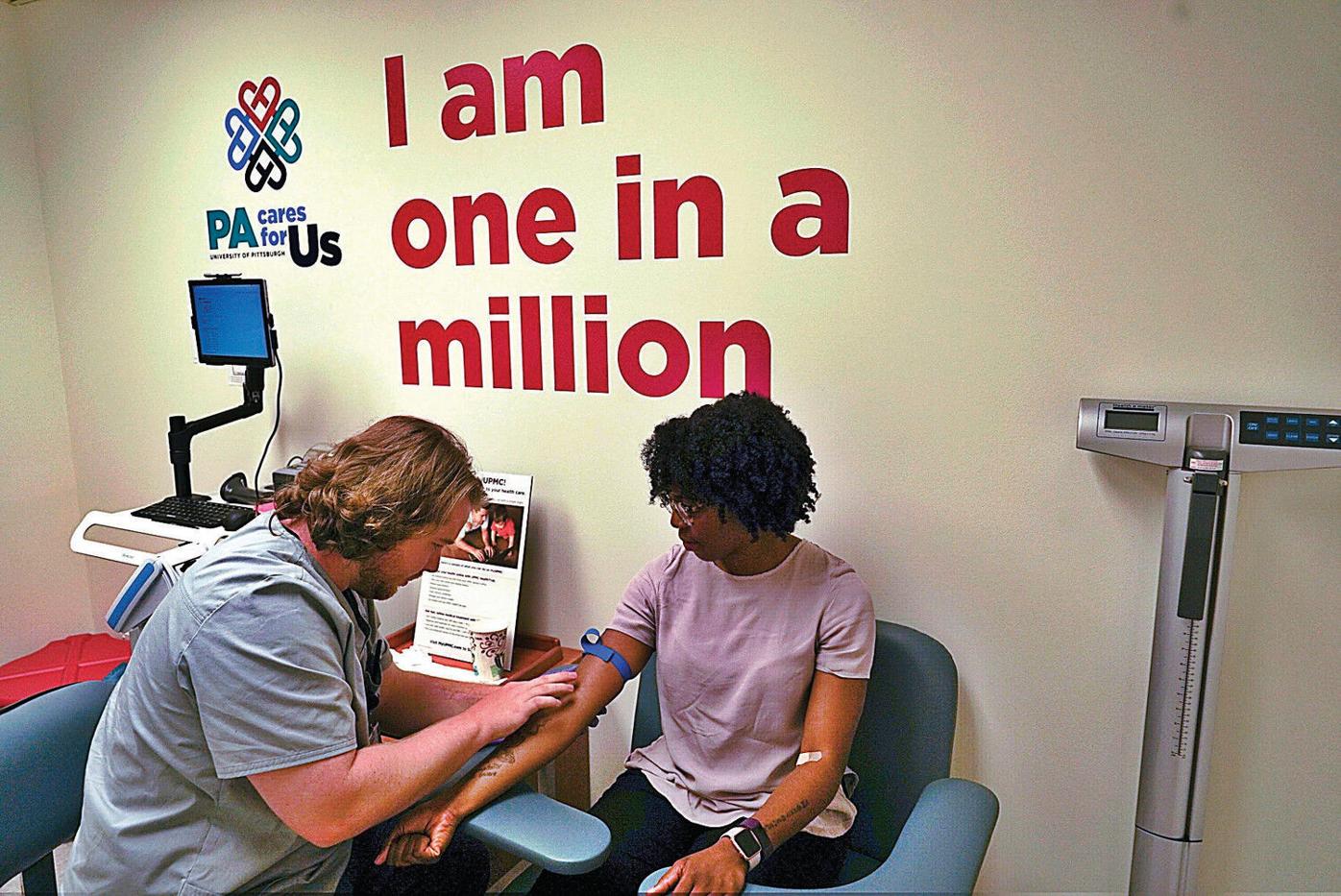 Kenneth Parker Ulrich, left, a research technician at the University of Pittsburgh Medical Center, prepares to collect a blood sample from Erricka Hager, right a participant in the "All of Us" research program in Pittsburgh, Ohio on Aug. 7. The "All of Us" research program is run by the National Institutes of Health and plans to track the health of at least 1 million volunteers by 2019. By doing so, researchers hope to learn how to better tailor treatments and preventative c

Stephanie Richurk, a nurse at the University of Pittsburgh Medical Center, sorts blood samples collected from participants in the "All of Us" research program in Pittsburgh, Ohio Aug. 7.

Kenneth Parker Ulrich, left, a research technician at the University of Pittsburgh Medical Center, prepares to collect a blood sample from Erricka Hager, right a participant in the "All of Us" research program in Pittsburgh, Ohio on Aug. 7. The "All of Us" research program is run by the National Institutes of Health and plans to track the health of at least 1 million volunteers by 2019. By doing so, researchers hope to learn how to better tailor treatments and preventative c

WASHINGTON — In a quest to end cookie-cutter health care, U.S. researchers are getting ready to recruit more than 1 million people for an unprecedented study to learn how our genes, environments and lifestyles interact — and to finally customize ways to prevent and treat disease.

Why does one sibling get sick but not another? Why does a drug cure one patient but only cause nasty side effects in the next?

Finding out is a tall order. Today, diseases typically are treated based on what worked best in short studies of a few hundred or thousand patients.

"We depend on the average, the one-size-fits-all approach because it's the best we've got," said Dr. Francis Collins, director of the National Institutes of Health.

That's changing: The NIH's massive "All Of Us" project will push what's called precision medicine, using traits that make us unique in learning to forecast health and treat disease. Partly it's genetics. What genes do you harbor that raise your risk of, say, heart disease or Type 2 diabetes or various cancers?

But other factors affect that genetic risk: what you eat, how you sleep, if you grew up in smog or fresh air, if you sit at a desk all day or bike around town, if your blood pressure is fine at a check-up but soars on the job, what medications you take.

Not to mention differences based on age, gender, race and ethnicity, and socioeconomics.

Layering all that information in what's expected to be the largest database of its kind could help scientists spot patterns, combinations of factors that drive or prevent certain diseases — and eventually, researchers hope, lead to better care.

"The DNA is almost the easiest part," Collins said. "It's challenging to figure out how to put all that together to allow somebody to have a more precise sense of future risk of illness and what they might do about it."

Pilot testing is under way, with more than 2,500 people who already have enrolled and given blood samples. More than 50 sites around the country — large medical centers, community health centers and other providers like the San Diego Blood Bank and, soon, select Walgreens pharmacies — are enrolling patients or customers in this invitation-only pilot phase.

If the pilot goes well, NIH plans to open the study next spring to just about any U.S. adult who's interested, with sign-up as easy as going online .

It's a commitment. The study aims to run for at least 10 years.

The goal is to enroll a highly diverse population, people from all walks of life — specifically recruiting minorities who have been under-represented in scientific research.

And unusual for observational research, volunteers will get receive results of their genetic and other tests, information they can share with their own doctors.

"Anything to get more information I can pass on to my children, I'm all for it," said Erricka Hager, 29, as she signed up last month at the University of Pittsburgh, the project's first pilot site. A usually healthy mother of two, she hopes the study can reveal why she experienced high blood pressure and gestational diabetes during pregnancy.

Heading the giant All Of Us project is a former Intel Corp. executive who brings a special passion: How to widen access to the precision medicine that saved his life.

In college, Eric Dishman developed a form of kidney cancer so rare that doctors had no idea how to treat him, and predicted he had months to live. Only two studies of that particular cancer had ever been done, on people in their 70s and 80s.

"They didn't know anything about me because they'd never seen a 19-year-old with this disease," said Dishman.

Yet he survived for two decades, trying one treatment after another. Then, as he was running out of options, a chance encounter with a genetics researcher led to mapping Dishman's DNA — and the stunning discovery that his kidney cancer was genetically more like pancreatic cancer. A pancreatic cancer drug attacked his tumors so he could get a kidney transplant.

"I'm healthier now at 49 than I was at 19," said Dishman. "I was lucky twice over really," to be offered an uncommon kind of testing and that it found something treatable.

Precision medicine is used most widely in cancer, as more drugs are developed that target tumors with specific molecular characteristics. Beyond cancer, one of the University of Pittsburgh's hospitals tests every patient receiving a heart stent — looking for a genetic variant that tells if they'll respond well to a particular blood thinner or will need an alternative.

The aim is to expand precision medicine.

"Why me?" is the question cancer patients always ask — why they got sick and not someone else with similar health risks, said Dr. Mounzer Agha, an oncologist at the University of Pittsburgh Medical Center.

"Unfortunately I don't have answers for them today," said Agha, who says it will take the million-person study to finally get some answers. "It's going to help them understand what are the factors that led to their disease, and it's going to help us understand how to treat it better."

And NIH's Collins expects surprises. Maybe, he speculates, Type 2 diabetes will turn out to be a collection of genetic subtypes that require varied treatments.

"This looks at individual responses to treatment in a way we couldn't do previously with smaller studies."

The study starts simply: Volunteers get some standard health checks — weight, blood pressure and heart rate. They answer periodic questionnaires about their health, background and habits, and turn over electronic health records. They give a blood sample that, if they agree, will undergo DNA testing sometime next year.

Eventually, researchers will ask some participants to wear sensors that may go beyond today's Fitbit-style health trackers, such as devices that measure blood pressure while people move around all day, or measure environmental exposures, Collins said.

In Pittsburgh, the Rev. Paul Abernathy made a health change after signing up for the pilot study: Surprised to learn his BMI was too high despite regular weightlifting, he began running.

"I'm praying I have the discipline to continue that, certainly in midst of a busy schedule," said Abernathy, who directs the nonprofit Focus Pittsburgh that aids the poor and trauma victims.

"We have a chance really to influence history, to influence the future of our children and our children's children," added Abernathy, who hopes the study will help explain racial disparities such as lower life expectancies between African-Americans and whites who live in the same areas.

At NIH, Collins plans to enroll, too. He's had his DNA mapped before but can't pass up what he's calling a one-in-a-million experience to be part of a monumental study rather than the scientist on the other side.

"I'm curious about what this might teach me about myself. I'm pretty healthy right now. I'd like to stay that way."

This Associated Press series was produced in partnership with the Howard Hughes Medical Institute's Department of Science Education. The AP is solely responsible for all content.