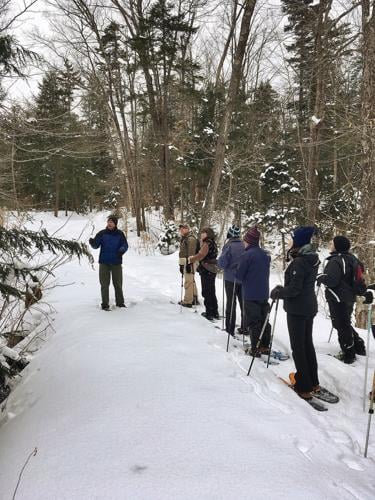 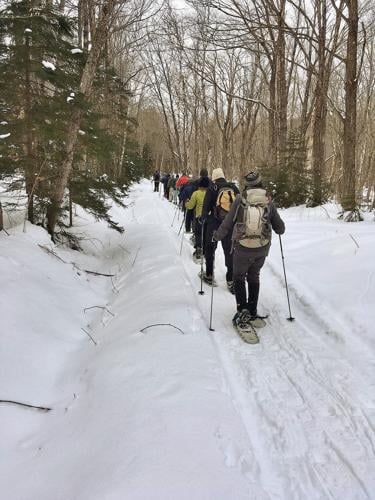 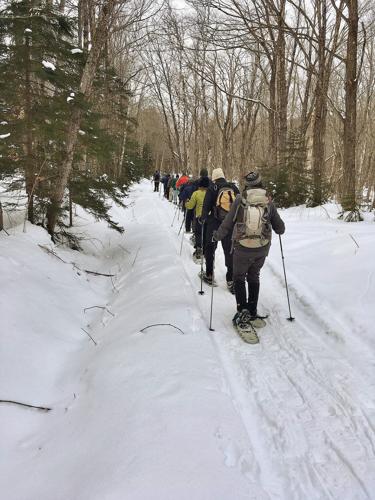 Jon Binhammer leads a group across the 3,500-acre Glebe Mountain area in 2019. The mountain area, which the Nature Conservancy preserved in 2019, will be added to the Silvio O. Conte National Fish and Wildlife Refuge, thanks to federal funds secured by U.S. Sen. Patrick Leahy.

Jon Binhammer leads a group across the 3,500-acre Glebe Mountain area in 2019. The mountain area, which the Nature Conservancy preserved in 2019, will be added to the Silvio O. Conte National Fish and Wildlife Refuge, thanks to federal funds secured by U.S. Sen. Patrick Leahy.

WINDHAM — Glebe Mountain, which was once the proposed site for a 27-turbine wind farm, will soon be removed from the rolls of land in Vermont open to development.

The Nature Conservancy announced last week it will be purchasing 3,500 acres in Windham and Londonderry, conserving it for generations to come.

"We have been doing conservation work in this area for may years and identified the Glebe Mountain forest block as an important ecological feature in southern Vermont," said Jonathan Binhammer, director of Land Protection at The Nature Conservancy.

In 2006, after facing public disapproval of their wind farm project, Catamount Energy Corp. and Marubeni Power International, Inc. announced they were ending development of the Glebe Mountain Wind Energy Project.

"Glebe Mountain is the crown jewel of the area," said Binhammer. "This purchase will protect the ridgeline of Glebe Mountain all the way down to some of the nearby lowlands."

Over the past 25 years, Ron McGraw, of Plainfield, N.J., assembled 26 parcels with the help of Bobby Waite, a real estate agent with Sotheby's International Realty in Londonderry. His goal was to create a hunting preserve for himself and his extended family, said Binhammer.

"We normally do that kind of work," said Binhammer. "Similar to what we did at Black Mountain in Dummerston, we assembled parcels over time to create a larger area. This is what McGraw did."

"Since we have been focused on fundraising and preparing for closing, we have not drafted a management plan for the property, so while it is fair to say that traditional uses will be allowed, the exceptions have not been completely ironed out," said Binhammer. "We have agreed to continue to allow the snowmobile trail on the property, however. And, for instance, that same trail or another connector trail could be used by other less traditional recreationists perhaps. We're in the information gathering stage now."

"We are getting quite a deal," said Binhammer.

"The Nature Conservancy committing some of its own funds to the purchase speaks to how important this project is," said Eve Frankel, director of Strategic Communications. "We knew this is one of those once-in-a-lifetime opportunities. We had to find a way to move forward."

The Nature Conservancy manages 55 natural areas in Vermont, said Binhammer. "Glebe Mountain is one of the largest parcels we've worked on."

The 3,500 acres, added to other holdings The Nature Conservancy has in the area will create what is called an ecological transect, or an area with vertical changes that support diverse fauna and flora.

"We know that the landscape is changing," said Frankel. "Every decade species are moving 11 miles north and 30 feet higher in response to climate change. It's important to stitch together a natural landscape that allows for species to move and adapt. The Glebe Mountain tract and other large tracts help to protect these connected landscapes. We employ a patient outlook on conservation. It can't be done in a day. This is decades worth of work."

According to The Nature Conservancy, Glebe Mountain's geology yields forests that literally and figuratively nourish wildlife. One of the most significant beech stands in southern Vermont is found on the parcel. Beechnuts are the star of the black bear's diet, on which they ravenously gorge prior to hibernation. And the intact forests will allow this wide-ranging species to move as needed for mating and food while also providing essential habitat for New England forest birds, such as the hermit thrush, scarlet tanager and black-throated blue warbler. The successful conservation of this parcel will also safeguard the upper Cobb Brook watershed, which feeds Hamilton Falls, protecting brook trout habitat and water quality that will be enhanced as the group works to remove culverts that block fish passage.

Last year, The Nature Conservancy purchased 800 acres abutting Jamaica State Park, which the Conservancy helped to establish in 1969. The acquisition, together with the existing Hamilton Falls Natural Area, protects a thousand acres of contiguous forest, an unusual red oak-red spruce natural community, vernal pools, a portion of Turkey Mountain Brook, and the peak of Turkey Mountain, stated a press release announcing the purchase.

Turkey Mountain, which is now a part of the Conservancy's Upper West River Landscape Natural Area, is considered by Nature Conservancy scientists to be a "natural stronghold" that is predicted to help plants, wildlife, and people withstand the growing impacts of climate change. Nature's strongholds represent resilient landscapes that allow species to move as they adapt to changing temperatures.

Although the 3,500-parcel is quite large, it does not include the summit of Glebe Mountain, said Binhammer. "We'll be about 200 feet shy of the top, which is owned by Magic Mountain."